The use of cell block sections is a valuable ancillary tool for evaluation of non-gynecologic cytology. They enable the cytopathologist to study additional morphologic specimen detail including the architecture of the lesion. Most importantly, they allow for the evaluation of ancillary studies such as immunocytochemistry, in-situ hybridization tests (FISH/CISH) and in-situ polymerase chain reaction (PCR). Traditional cell block preparation techniques have mostly been applied to non-gynecologic cytology specimens, typically for body fluid effusions and fine needle aspiration biopsies.

Liquid based cervicovaginal specimens are relatively less cellular than their non-gynecologic counterparts with many individual scattered cells. Because of this, adequate cellularity within the cell block sections is difficult to achieve. In addition, the histotechnologist sectioning the block cannot visualize the level at which the cells are at the highest concentration. Therefore, it is difficult to monitor the appropriate level at which sections can be selected to be transferred to the glass slides for testing. As a result, the area of the cell block with the cells of interest may be missed, either by cutting past or not cutting deep enough. Current protocol for Shidham's method addresses these issues. Although this protocol is standardized and reported for gynecologic liquid based cytology specimens, it can also be applied to non-gynecologic specimens such as effusion fluids, FNA, brushings, cyst contents etc for improved quality of diagnostic material in cell block sections.

This is a video describing Shidham’s method for cell block preparation from liquid based cytology (LBC) specimen using HistoGelTM (Thermo Scientific) (HG). As compared to other random approaches, the following are the two critical features of this protocol for preparing cell blocks from relatively hypocellular specimens with singly scattered loose cells (1-5).

Preparation of the sample.

Inclusion of the reference coordinate AV-marker and addition of gel

Embedding and cutting of the specimen 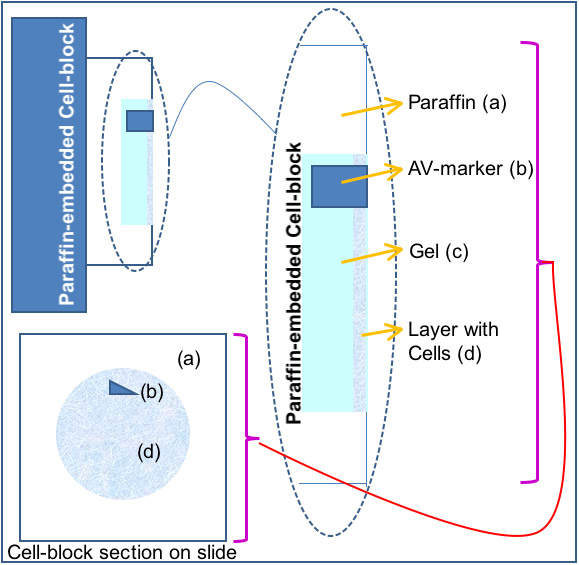 Figure 1. The structure of cell block prepared by Shidham’s protocol. 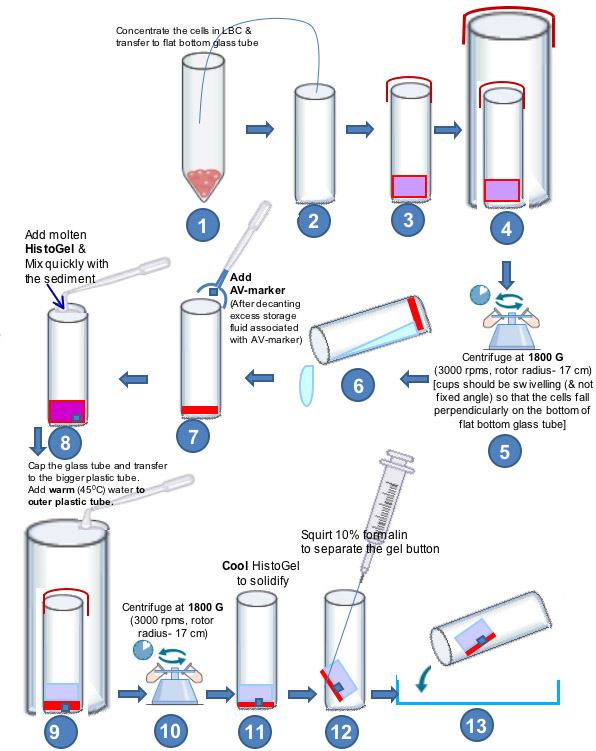 Figure 2. The summary of different steps for preparing cell block from LBC specimen by Shidham’s protocol. 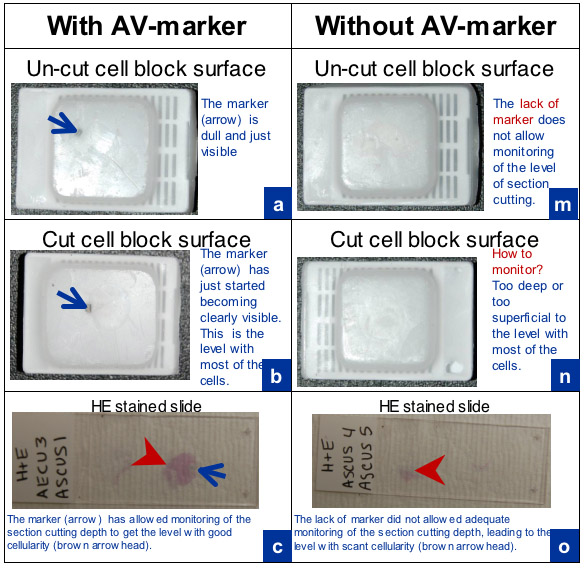 Figure 4. Comparison of cell blocks and sections with and without AV-marker. 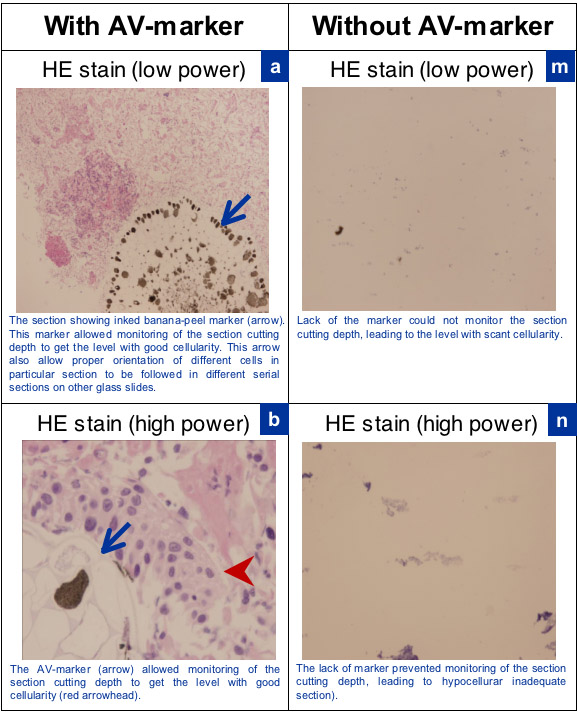 Figure 5. Comparison of cellularity of sections of cell block with and without AV-marker.

Cell blocks are a valuable tool for evaluation of various cytology specimens (1). Most importantly, in addition to the architectural details of the specimen, cell blocks allow for evaluation of ancillary studies such as immunocytochemistry, fluorescent/chromogenic in-situ hybridization tests (FISH/CISH) and in-situ PCR. A variety of methods for preparation of cell block are described. However, most of these are suitable for non-gynecologic cytology specimens which contain relatively many cells and with tissue microfragments such as in FNA aspirates and some serous fluids such as effusions (1,3,4,5).

Because cell blocks primarily provide the opportunity for immunocytochemical evaluation, their processing should preferably be similar to that of the formalin-fixed paraffin-embedded (FFPE) tissues. Ultimately the results obtained after immunocytochemical evaluation of cell block sections are compared to those with the published literature performed predominantly on FFPE tissue sections. Any alterations in the protocol potentially compromise and nullify the validity of the results obtained on cell blocks processed through different fixatives and reagent sequences other than that used for routine FFPE. Some commercial techniques may have the drawback of processing through a protocol of exposure to other fixative-reagent exposure.

Various methods of cell block preparation are available for specimens with a significant quantity of sediment and tissue fragments. Principally, the concentrated sediments are supported by some gel or coagulation principle. The maneuverable button is then embedded in paraffin after processing like the surgical pathology specimens/biopsies.

The gels used include gelatin, agar, fibrinogen/plasma-thrombin, and other commercial gels such as HG. The methods of concentration vary from simple pelleting of the sediment by centrifugation to concentration of cells along various types of membranes. Examples include: Milipore, collodin (Celloidin) bags or scraping the cells from the cytology smears on glass slides (1). We also evaluated a variety of gels by trying different combinations of agar and gelatin. None of the combinations achieved the a firm enough consistency to obtain an easily maneuverable disc of solidified gel with embedded cells from the specimen in one piece. HG showed appropriate consistency and in our experience the immunostaining results on HG cell block sections have been excellent.

Liquid based cytology (LBC) specimens for cervicovaginal cytology are generally less cellular than non-gynecologic specimens as mentioned above. In addition, the gynecologic LBC specimens predominantly contain individual scattered exfoliated superficial cells from cervicovaginal mucosa. Due to this, appropriate cellularity within the cell block sections may not be achieved without a special approach. As these singly scattered cellular components in the the block cannot be seen by the histotechnologist during section cutting, the level at which the cells start appearing in the sections cannot be appreciated and may be missed, either by cutting past the level with most cells or not cutting deep enough into the level with highest concentration of sample cells (Figure 4). Shidham’s protocol addresses both of these issues using HG as embedding medium and conventional lab equipments (2) (Figure 2).

Although our protocol is standardized and reported for liquid based cervical cytology specimens, it can also be used to enhance diagnostic yield of many other non-gynecologic specimens such as effusion fluids, FNA, brushings, cyst contents etc. In addition the AV marker would facilitate improved application of SCIP approach during immunohistochemical evaluation of cell block sections of these specimens. The embedding medium may be replaced by other reagents with appropriate modifications at relevant steps. HG may be replaced by plasma (Fibrinogen) to be gelled by Thrombin at room temperature (1).

The authors thank Chris Chartrand, HT(ASCP) for demonstrating the section cutting of the cell block with AV marker. 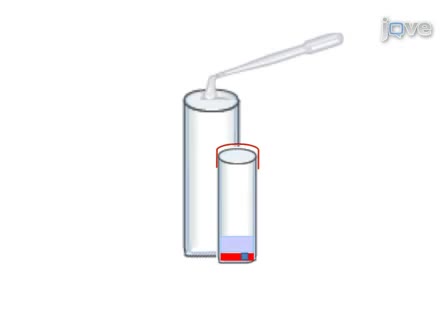