We describe a method for repeatedly visualizing murine microglia and circulating monocytes in vivo over hours, days or weeks using transcranial two-photon microscopy. We demonstrate how to prepare a thinned-skull window that allows intermittent observation of quiescent microglia that can be activated by adjacent stereotactic injection of the HIV-1 regulatory protein Tat.

Traditionally in neuroscience, in vivo two photon imaging of the murine central nervous system has either involved the use of open-skull1,2 or thinned-skull 3 preparations. While the open-skull technique is very versatile, it is not optimal for studying microglia because it is invasive and can cause microglial activation. Even though the thinned-skull approach is minimally invasive, the repeated re-thinning of skull required for chronic imaging increases the risks of tissue injury and microglial activation and allows for a limited number of imaging sessions. Here we present a chronic thin-skull window method for monitoring murine microglia in vivo over an extended period of time using two-photon microscopy. We demonstrate how to prepare a stable, accessible, thinned-skull cortical window (TSCW) with an apposed glass coverslip that remains translucent over the course of three weeks of intermittent observation. This TSCW preparation is far more immunologically inert with respect to microglial activation than open craniotomy or repeated skull thinning and allows an arbitrary number of imaging sessions during a time period of weeks. We prepare TSCW in CX3CR1 GFP/+ mice 4 to visualize microglia with enhanced green fluorescent protein to ≤150 μm beneath the pial surface. We also show that this preparation can be used in conjunction with stereotactic brain injections of the HIV-1 neurotoxic protein Tat, adjacent to the TSCW, which is capable of inducing durable microgliosis. Therefore, this method is extremely useful for examining changes in microglial morphology and motility over time in the living brain in models of HIV Associated Neurocognitive Disorder (HAND) and other neurodegenerative diseases with a neuroinflammatory component.

1. Preparing the Animal for Imaging

4. Injection of the HIV-1 Neurotoxin, Tat

Figure 1. Stabilization of animal for surgery and two-photon imaging (A) and head plate design (B). 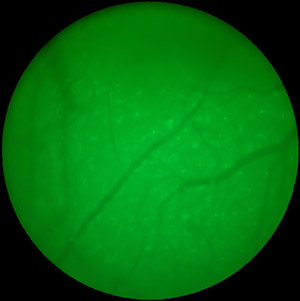 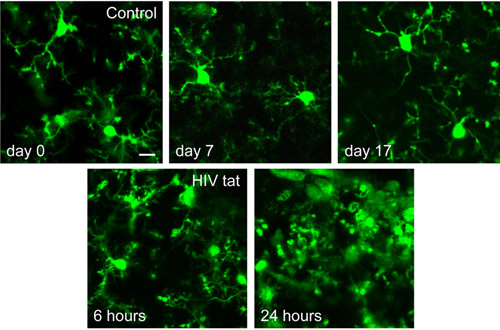 Figure 3. GFP-labeled microglia visualized with two-photon imaging after implantation of the TSCW, approximately 50 μm below the pial surface. The single two-photon sections taken 15-30 minutes after implantation of the TSCW (day 0), as well as 7 and 17 days later, demonstrate that the windows stays clear while microglia remain inactivated in absence of inflammatory insults. The z-projections taken 6 and 24 hours post-injection of the HIV neurotoxin tat exhibit impressive morphologic changes of activated microglia. Scale bar: 10 μm.

There is growing consensus that the actual substrate for HIV-1 associated neurocognitive deficits (HAND) is destruction of synaptic architecture, presumably caused by pro-inflammatory mediators released from HIV-1 infected mononuclear phagocytes. Microglial activation, multinucleated giant cells, and gliosis due to astrocytic hypertrophy are considered nonspecific hallmarks of HIV-1 infection and inflammation in the CNS 7. In contrast, the severity of premortem neurologic disease has been correlated with loss of synaptic complexity, as well as macrophage burden in the CNS 8,9,10,11. However, dynamic interactions between microglia, peripheral infiltrating macrophages, and neurons in patients with HAND simply cannot be modeled using conventional static processing obtained from conventional immunocytochemical studies. Recent studies from our laboratories have suggested that at least some of these interactions between peripheral and central mononuclear cells and neurons can be modeled in part by stereotactic injection of the HIV-1 protein Tat1-72 into brain parenchyma (Lu, Marker, Tremblay, Qi, and Gelbard, unpublished data). We therefore decided to apply in vivo two photon imaging to examine the interplay between monocyte-derived macrophages, brain resident microglia and neurons, in a tractable small animal model for neuroAIDS. While open-skull or thinned-skull preparations afford a single examination of cortical architecture for a brief period of time (hours), investigators interested in the time course of subacute events cannot use these preparations without artifactually activating microglia/macrophage due to surgical manipulation of the calvarial window. Here we demonstrate a simple way of circumventing these limitation by gluing a tiny piece of glass coverslip over the thinned skull area preventing the calvarium from regenerating in the TSCW as well as maintaining translucency for ≥3 weeks. We further demonstrate that this technique allows us to monitor the behavior of peripheral monocytes entering cerebral microvasculature as well as brain-resident microglia in response to stereotactic injection of HIV Tat1-72 in the cortex of mice heterozygous for CX3CR1/GFP (to identify cells of mononuclear lineage). This technique can easily be adapted to use on mice with different genetic backgrounds; for example, we routinely use heterozygous CX3CR1/GFP X Thy-1 YFP 12 mice to investigate interactions between monocyte-derived macrophages, brain resident microglia and neurons in in vivo models of neuroinflammation relevant to HAND. Our TSCW preparation allows investigators to study cell-cell interactions between the periphery and CNS that may occur over periods of weeks, in which the animal can be repeatedly imaged before and after experimental treatment. Thus, each animal can serve as its own control. One caveat for this TSCW model is that the target cells under investigation need to be either genetically engineered to express enhanced fluorescent proteins (eXFP) or be labeled with a fluorescent dye without mechanical breach of the calvarium; and that eXFP expression must be robust enough to allow cellular architecture to be visualized after repeated imaging sessions over a period of weeks.

We thank Emily A. Kelly for the head plate design.

We are grateful for the support of NIH awards to H.A.G.: PO1 MH64570, RO1 MH56838, RO1 MH078989, R21 MH03851 and the generous support of the Geoffrey Waasdorp Pediatric Neurology Fund without which this work would not have been possible. A.K.M is funded by the NIH (EY019277), Whitehall Foundation, the Alfred P. Sloan Foundation and a Career Award in the Biomedical Sciences from the Burroughs Wellcome Fund. M.E.T. is funded by a Fonds de la recherche en sante du Quebec (FRSQ) postdoctoral training award. D.F.M. is a trainee in the Medical Scientist Training Program, funded by NIH T32 GM07356 and T32 AI049815. 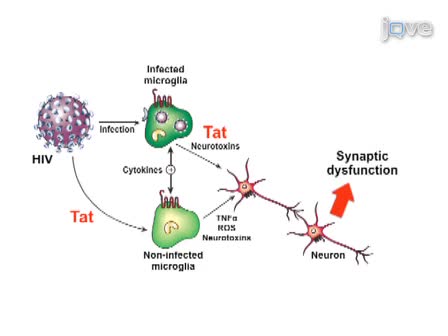