Application and direct measurements of forces on neurons in the 2-1000 microdyne range are achieved with high precision using calibrated glass needles. This methodology can be used to control and measure several aspects of axonal development, including axonal initiation, axonal tension, velocity of axonal elongation, and force vectors.

Cell manipulations and extension of neuronal axons can be accomplished with calibrated glass micro-fibers capable of measuring and applying forces in the 10-1000 μdyne range1,2. Force measurements are obtained through observation of the Hookean bending of the glass needles, which are calibrated by a direct and empirical method3. Equipment requirements and procedures for fabricating, calibrating, treating, and using the needles on cells are fully described. The force regimes previously used and different cell types to which these techniques have been applied demonstrate the flexibility of the methodology and are given as examples for future investigation4-6. The technical advantages are the continuous 'visualization' of the forces produced by the manipulations and the ability to directly intervene in a variety of cellular events. These include direct stimulation and regulation of axonal growth and retraction7; as well as detachment and mechanical measurements on any type of cultured cell8.

2. Making and calibrating a wire needle

5. Needles are pretreated with attachment factors

9. Extending an axon or cell process

The force-calibrated glass needles can easily be applied to any cellular region, usually the growth cone, as visualized directly by light microscopy. With appropriate treatment of the needle to obtain cellular attachment, mechanical tension can be experimentally applied to the cellular region of interest, or the forces produced by that region can be measured. A representative neuronal towing experiment is shown in Figure 1, where the towed axon has been doubled in length in two hours. 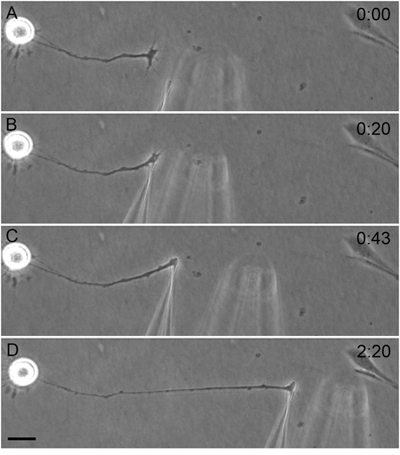 Figure 1. A cultured chicken dorsal root ganglion cell with the preferred orientation for towing is chosen. The initial zero reference distance between the needles is recorded before the experimental manipulation begins (A). The 'push up' maneuver is applied to the growth cone (B). Towing begins with increased force loading as indicated by the separation of the needles (C). Towing has extended the axon, the 'horizontal' and perpendicular alignments of the towed axon and working needle have facilitated good force measurements (D). Bar = 40 μm. Needle calibration = 6.9 μdyne/μm.

Techniques to apply and measure cellular forces have a long history9. Our method was originally motivated by the work of Dennis Bray, who used glass needles similar to ours to 'tow' neurons at a constant rate using a motorized hydraulic device10. There are many alternative means of applying forces to cells which include: stepper motors11, magnetic beads12, microfabricated beams13 and fluid flows14. The latter are similar to our approach in that the cellular probe is ultimately calibrated against a bending beam of known stiffness and the cellular measurements depend on optical microscopic observations. In comparison to other approaches, the primary advantage of our method3 is the ability to simultaneously apply and measure forces in the μdyne range using equipment (microscopes and micromanipulators) typical of life science departments.

Using these methods, the forces exerted by neuronal growth cones as they advance have been measured15. The mechanical relationship of axonal elongation rate in response to tension has been determined to follow a Newtonian fluid-like stimulus-response relationship7. The relative sensitivity of axons in response to tension was shown to be greater for central brain neurons than for peripheral neurons of the chicken embryo2. Retraction of axons has also been investigated7. Neurons with no determined axons can have their axonal/dendritic polarity controlled by application of mechanical tension5. In fibroblasts expressing GFP-labeled actin or tubulin, we directly visualized the response of the cytoskeleton to simple attachment of the needle as well its response to changes of tension8. Cell attachments to each other or substrates have been tested1. The propulsive forces of motile cells could be examined and the pull of approaching filipodia could be measured16. The motions displayed by labeled mitochondria within towed axons have been used to model internal material transport (low velocity transport) and determine that neurons grow by intercalated mass addition along the length of the axonal shaft6,17.

For investigators simply interested in applying forces without measuring them, the use of the reference needle is not required18. In contrast, if force measurements are desired the reference needle is essential to generate accurate data. Overall, we estimate the error in the absolute force measurements to be in the range of 5% to 10% with the greatest source of error arising in the data reading process. The difficulty is in precisely identifying the location of the defocused reference needle and minimizing the effects of small back and forth movements (vibrations) of the needles. Without a reference needle, these sources of error would be even larger.

Experimental manipulations need not end with the towing session. Towed growth cones can be attached to other cells or reattached to the dish5. Using this manipulative opportunity, neuronal micro-circutry could intentionally be configured, allowing cross talk of different cell types to be examined.

We gratefully acknowledge the important contributions of Dr. Robert E. Buxbaum in the development of this methodology. 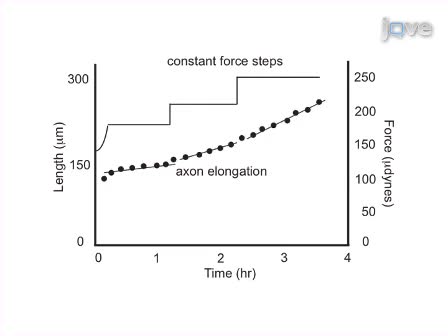