The heterogeneous nature of cell types in the testis and the absence of meiotic cell culture models have been significant hurdles to the study of the unique differentiation programs that are manifest during meiosis. Two principal methods have been developed to purify, to varying degrees, various meiotic fractions from both adult and immature animals: elutriation or Staput (sedimentation) using BSA and/or percoll gradients. Both of these methods rely on cell size and density to separate meiotic cells1-5. Overall, except for few cell populations6, these protocols fail to yield sufficient purity of the numerous meiotic cell populations that are necessary for detailed molecular analyses. Moreover, with such methods usually one type of meiotic cells can be purified at a given time, which adds an extra level of complexity regarding the reproducibility and homogeneity when comparing meiotic cell samples.

Here, we describe a refined method that allows one to easily visualize, identify, and purify meiotic cells, from germ cells to round spermatids, using FACS combined with Hoechst 33342 staining7,8. This method provides an overall snapshot of the entire meiotic process and allows one to highly purify viable cells from most stage of meiosis. These purified cells can then be analyzed in detail for molecular changes that accompany progression through meiosis, for example changes in gene expression9,10and the dynamics of nucleosome occupancy at hotspots of meiotic recombination11.

This protocol can be separated in two major steps: (1) the dissociation and Hoechst 33342 staining of mouse testis cells followed by, if necessary, (2) FACS sorting of the relevant meiotic fractions, including all stages of meiosis, from germ cells to round spermatids. Once collected, these highly enriched meiotic populations can be used for a wide range of analysis. This protocol describes the dissociation of one adult testis; volumes can be adapted accordingly for juveniles or for additional testes.

A typical FACS profile is shown in Figure 1. All of the major steps of meiosis are identified and are indicated in the legend. If the Hoechst 33342 stain is not optimal, the global profile will appear much more compact and less defined. A common problem regards not adding sufficient DNAse, which will induce rapid cell clumping. Addition of extra DNAse at all indicted steps usually solves this problem. Freeze thawing of the DNAse stock (stored at -20°C)should be kept to a minimum, as this results in rapid loss of enzyme activity.

Spo11 is the meiotic endonuclease that directs double-strand breaks at sites of meiotic recombination hotspots12.Figure 2 shows typical profiles of a Spo11-null testis where double-strand break are not formed, resulting in an abortive meiosis12, as well as a pre-puberous profile of a 13-days old mouse, which reveals asynchronous nature of this first wave of meiosis. Standard cytogenetic analyses using the combination of synaptonemal complex protein 3 (SCP3) and phosphorylated histone H2AX antibodies stage-specific meiosis markers should be initially used to confirmed the purity and nature of the sorted meiotic cells, as described elswhere11. 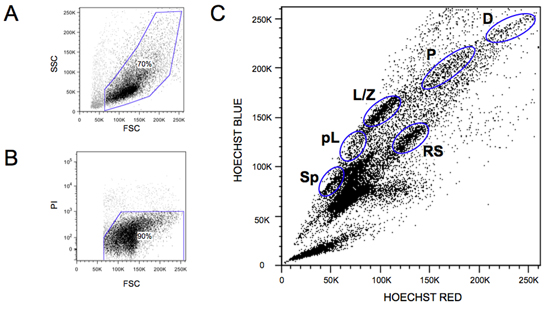 Figure 2. Spo11-null and wild-type day 13 meiotic FACS profiles. A) A typical Spo11-null profile is shown with a clear meiotic failure, where no stage past the leptotene/zygotene early-pachytene can be detected. B) The profile of a 13-day-old wild-type male mouse shows the high concentration of leptotene/zygotene cells. This first wave of meiosis is rather asynchronous, as clearly visualized using this methodology.

The protocol presented herein allows one to simultaneously purify from adult male mice the entire range of the meiotic stage cells with very high purity, allowing investigators to study the dynamics of this fundamental process. Purified cells can be used for numerous applications ranging from RNA extraction9,10, nucleosome mapping11, recombinant molecule detection, protein analyses, and many more. However, detection methods have to be adapted to the amount of meiotic cells purified. Moreover, with the high reproducibility of this method, it is possible to pool multiple independent sorts of the same fraction performed on different days to increase the amount of material required for a particular experiment. Also, this method provides investigators with a unique visual representation of the entire meiotic process, which allows one to rapidly assess the effects of genetic knockout, developmental progression aberration, or the effect of any particular treatment aimed at affecting meiosis (e.g., irradiation, or treatment with small molecule inhibitors).

Critical steps in this protocol are (i) the use of sufficient DNAse, which greatly facilitates cell sorting by avoiding cell clumps and aggregates, and (ii) consistent Hoechst 33342 staining that is necessary to efficiently distinguish the various populations of meiotic stage cells. In addition, FACS operator should familiarize themselves with the specifics and peculiarities of meiotic cell sorting in order to optimally setup their instrument to obtain the profiles shown in Figure 1 and detailed in the video. A possible modification could be to substitute the Hoechst 33342 with the new Vybrant DyeCycle Violet Stain (Invitrogen) that has been optimized for the violet laser. However, the overall profile would not be expected to change drastically. Finally, it is also important to note that due to the nature of the tissue used, a typical procedure will take 1 ½ hr to prepare the meiotic cells and 4 to 6-hr for the cell sort, plus additional post-sort manipulations. 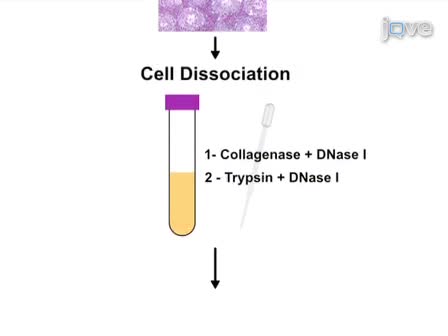