The gold standard for DNA methylation analysis is genomic sequencing of bisulphite converted DNA. This method takes advantage of the increased sensitivity of cytosine compared with 5-methylcytosine (5-MeC) to bisulphite deamination under acidic conditions. Unmethylated cytosines can be distinguished from methylated cytosines after PCR amplification of the target genomic DNA.

Epigenetics describes the heritable changes in gene function that occur independently to the DNA sequence. The molecular basis of epigenetic gene regulation is complex, but essentially involves modifications to the DNA itself or the proteins with which DNA associates. The predominant epigenetic modification of DNA in mammalian genomes is methylation of cytosine nucleotides (5-MeC). DNA methylation provides instruction to gene expression machinery as to where and when the gene should be expressed. The primary target sequence for DNA methylation in mammals is 5'-CpG-3' dinucleotides (Figure 1). CpG dinucleotides are not uniformly distributed throughout the genome, but are concentrated in regions of repetitive genomic sequences and CpG "islands" commonly associated with gene promoters (Figure 1). DNA methylation patterns are established early in development, modulated during tissue specific differentiation and disrupted in many disease states including cancer. To understand the biological role of DNA methylation and its role in human disease, precise, efficient and reproducible methods are required to detect and quantify individual 5-MeCs.

This protocol for bisulphite conversion is the "gold standard" for DNA methylation analysis and facilitates identification and quantification of DNA methylation at single nucleotide resolution. The chemistry of cytosine deamination by sodium bisulphite involves three steps (Figure 2). (1) Sulphonation: The addition of bisulphite to the 5-6 double bond of cytosine (2) Hydrolic Deamination: hydrolytic deamination of the resulting cytosine-bisulphite derivative to give a uracil-bisulphite derivative (3) Alkali Desulphonation: Removal of the sulphonate group by an alkali treatment, to give uracil. Bisulphite preferentially deaminates cytosine to uracil in single stranded DNA, whereas 5-MeC, is refractory to bisulphite-mediated deamination. Upon PCR amplification, uracil is amplified as thymine while 5-MeC residues remain as cytosines, allowing methylated CpGs to be distinguished from unmethylated CpGs by presence of a cytosine "C" versus thymine "T" residue during sequencing.

A standard protocol for the conversion of 2 μg of genomic DNA is described below. Smaller or larger amounts of genomic DNA (100 pg-200 μg) can also be bisulphite treated successfully. These reaction conditions result in complete conversion (99.5-99.7%) of almost every target DNA sequence3.

Prepare samples by incubating genomic DNA with bisulphite DNA Lysis Buffer (2 μg tRNA, 280 ng/μl Proteinase K, 1% SDS) in a total volume of 18 μl for 1 hr at 37°C. Note: This is important to achieve maximal bisulphite conversion, especially with DNA isolated from clinical samples where there may still be protein associated with the DNA.

After optimization of thermocyling and reaction conditions Bisulphite treated samples can be amplified with strand specific and bisulphite specific primers in either a single or semi nested PCR reaction. The resulting PCR fragments can be visualized by agarose gel electrophoresis and sequenced either directly (Figure 4A) or by cloning and sequencing. After cloning and sequencing the methylation state of the individual molecules can be tabulated, in a bisulphite map (Figure 4B), to visualize the heterogeneity of methylation.

High throughput quantitative methylation analysis can be preformed using technology such as that utilized by the Sequenom EpiTYPER method. Using this method, bisulphite converted DNA is amplified with bisulphite specific PCR primers and followed by a proprietry cleavage process. The resulting fragments are quantitated by MALDI-TOF mass spectrometry with the specific spectrum dependent on the presence of methylated cytosines (Figure 5A). A summary of methylation ratios in the sample can then be extrapolated in the form of an Epigram (Figure 5B) or methylation plot (Figure 5C). 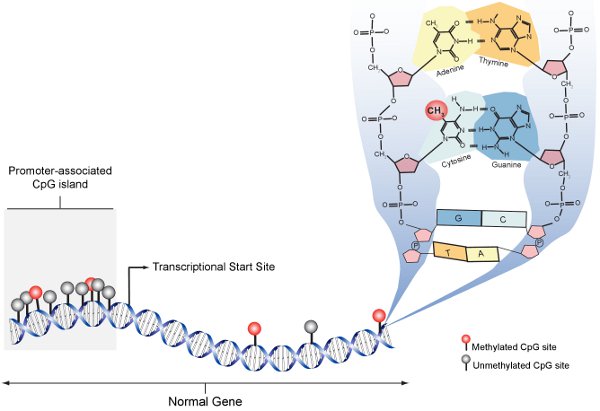 Figure 1. Methylated CpG schematic. In the normal cell, promoter-associated CpG islands are predominantly unmethylated (grey) whereas CpG sites within gene bodies are sparse and generally methylated (red). The panel on the right expands the molecular structure of DNA at an individual CpG site and shows methylation with a CH3 molecule at carbon 5 of cytosine. 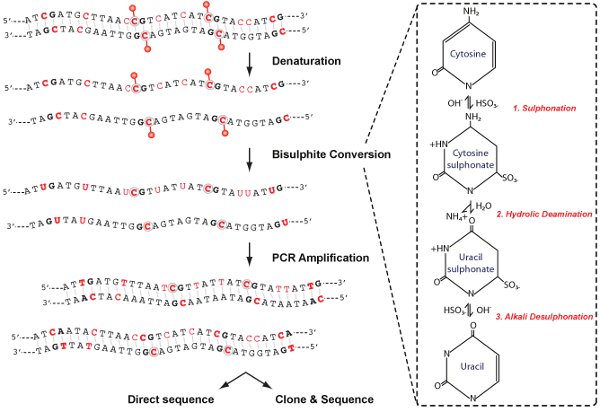 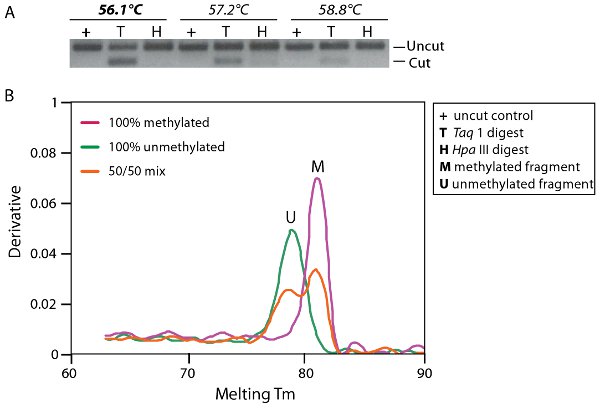 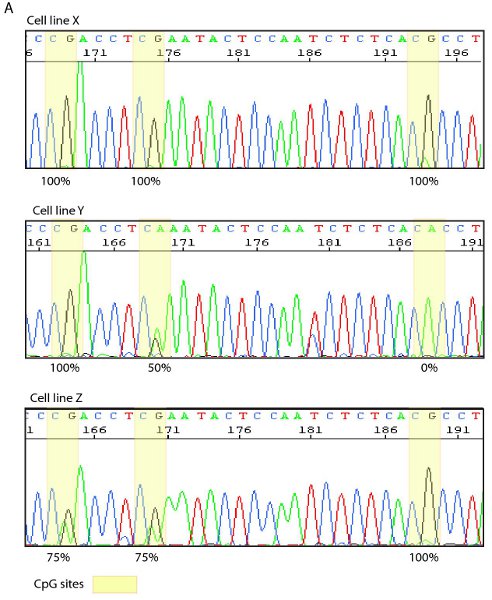 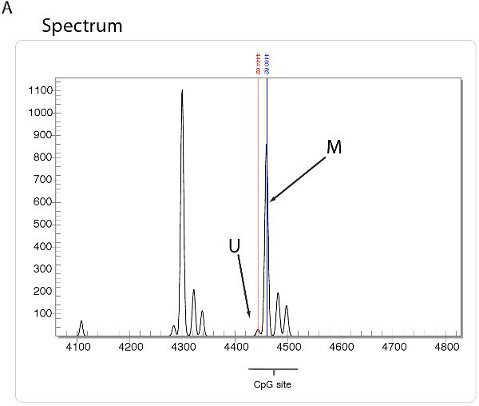 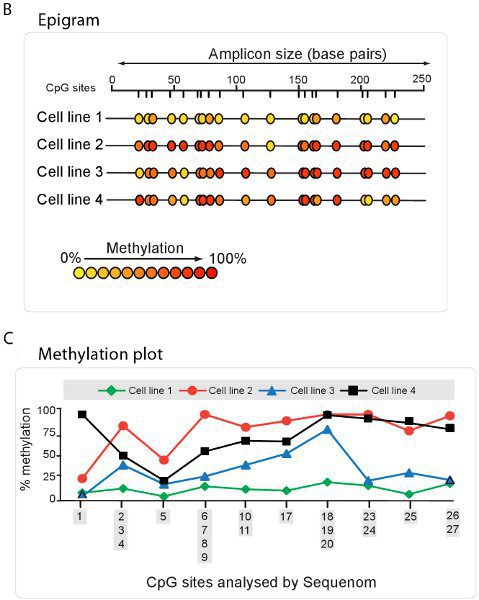 DNA methylation analysis by genomic sequencing of bisulphite converted DNA is a well established and versatile method that facilitates the identification and quantification of DNA methylation at single nucleotide resolution. However, bisulphite conversion and subsequent analysis relies on the premise that the DNA has been fully converted with every unmethylated cytosine being deaminated to uracil and only methylated cytosines remaining un-reactive. If conversion is incomplete, problems can arise with analysis since unconverted unmethylated cytosines may be incorrectly interpreted as methylated cytosines. Bisulphite conversion can be optimized at various stages to maximize the percentage of conversion. For DNA to be fully converted it first must be single stranded so that cytosine residues are exposed to the bisulphite ions. The first step, DNA denaturation, is critical and can be the source of incomplete conversion if the DNA is not fully denatured. To ensure that the DNA is fully denatured it is important that the reaction parameters including removal of all associated protein, appropriate salt concentration, incubation temperature and time are suitable to maintain DNA in single stranded conformation. It is important to use fresh 3M NaOH and to allow adequate incubation time. If the DNA is resisting denaturation, some modifications to the protocol including extending the incubation time to 30 minutes or fragmenting the DNA prior to denaturation may facilitate DNA denaturation. In addition, single stranded DNA (ssDNA) may re-anneal to double stranded DNA (dsDNA) during the bisulphite conversion reaction. Carrying out the reaction at a higher temperature (90-95°C) either periodically, or continuously during the bisulphite reaction can aid the maintenance of ssDNA. However, it is important to be aware that DNA degradation is greatly accelerated at these higher temperatures. Various reagents can also be added to disrupt re-annealing of the DNA strands, such as urea.

Formalin fixed, paraffin embedded (FFPE) and degraded DNA samples can be effectively bisulphite converted and amplified using this protocol, however modifications to ensure that the DNA is not further degraded are advised. The use of a carrier RNA such as tRNA is recommended. Also glycogen can be added as a carrier when DNA concentration is low (<200 ng). Because DNA isolated from FFPE tissues is already fragmented and further fragmentation takes place during deamination, care must be taken to minimize further degradation. Do not fragment DNA any further before denaturation and limit the incubation time for the bisulphite reaction to 4 hours. Design amplicons no larger than 300 bp due to fragmented DNA.

Another factor that can affect PCR amplification that bisulphite conversion of unmethylated cytosines reduces the complexity of the DNA template. The following primer design protocol outlined in section 4.1, increased primer length and nested PCR can all help to increase specificity and PCR yield.

Finally, since the DNA template is altered during bisulphite conversion, amplification bias can be a concern. Ensure that proportional PCR amplification of methylated and unmethylated templates is checked with a control 50/50 M/U DNA mix, as outlined in the protocol, see Figure 3. Also ensure that amplification of only converted templates is occurring using HpaIII restriction enzyme and gel electrophoresis (Figure 3). The PCR conditions may need to be optimized by varying the temperature and/or magnesium concentration or lengthening extension time. Some templates appear to be particularly problematic and primer position may need to be adjusted or degenerate primers may need to be used.

Next generation sequencing techniques are rapidly evolving to achieve a similar resolution to bisulphite genomic sequencing, and third generation single molecule sequencing has the potential to allow for analysis of both primary DNA and methylation without the need for bisulphite sequencing. However, widespread availability and specificity of these techniques remain some time away. Bisulphite genomic sequencing is the gold standard in methylation analysis and is a robust protocol. The method has progressed to the point where the common problems and limitations have been resolved and the applications have expanded from individual gene analyses to high throughput and whole genome analysis described by Clark et al. 20064. Troubleshooting guidelines and additional recommendations are outlined in Table 1. It is suggested that the optimum approach is to initially follow the standard protocol and only introduce modification if and when a problem arises. 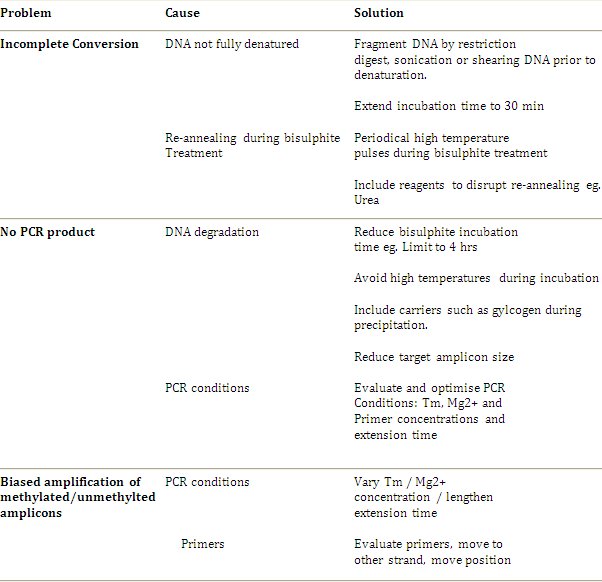 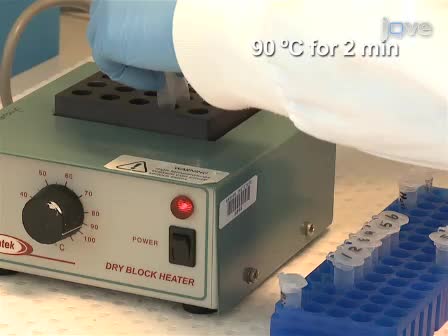