Adult-born neurons of the olfactory bulb can be optogenetically controlled using Channelrhodopsin2-expressing lentiviral injection in the rostral migratory stream and chronic photostimulation with an implanted miniature LED.

Local interneurons are continuously regenerated in the olfactory bulb of adult rodents1-3. In this process, called adult neurogenesis, neural stem cells in the walls of the lateral ventricle give rise to neuroblasts that migrate for several millimeters along the rostral migratory stream (RMS) to reach and incorporate into the olfactory bulb. To study the different steps and the impact of adult-born neuron integration into preexisting olfactory circuits, it is necessary to selectively label and manipulate the activity of this specific population of neurons. The recent development of optogenetic technologies offers the opportunity to use light to precisely activate this specific cohort of neurons without affecting surrounding neurons4,5. Here, we present a series of procedures to virally express Channelrhodopsin2(ChR2)-YFP in a temporally restricted cohort of neuroblasts in the RMS before they reach the olfactory bulb and become adult-born neurons. In addition, we show how to implant and calibrate a miniature LED for chronic in vivo stimulation of ChR2-expressing neurons.

2. Chronic LED implantation for in vivo optogenetic stimulation in the olfactory bulb

ChR2-YFP is expressed in transduced neurons approximately 48 hours after injection, and remains stable for several months7. Figure 1 is a representative picture of a sagittal section of a paraformaldehyde-fixed animal 15 days post-injection. Note the dense labeling and the size of the injection site in the RMS. A large number of newborn cells have migrated along the RMS to colonize the different layers of the olfactory bulb (Fig. 1). The fusion protein is expressed in all neuron compartments, including the soma, dendrites, and spines.

Miniature LED implantation allows large scale and inexpensive optical stimulation of a broad region of interest. The animal is tethered to the LED controller with a light electrical cable that allows a complete freedom of movement. By characterizing the light diffusion in the brain tissue and the threshold of ChR2 activation, we estimate that optical activation could be triggered at a depth of ~2mm below the surface of the LED (Fig. 2A). To monitor the functional activation of ChR2-expressing neurons in vivo, the expression of c-fos, a marker of neuronal activity, can be analyzed after repetitive light stimulation (Fig. 2B). As an alternative, in vitro electrophysiological recordings of ChR2-expressing neurons coupled to focal light stimulation can be performed14. Finally, two-photon targeted loose-patch recordings have been used to study the functional activation of ChR2-expressing cortical neurons by similar miniature LED in vivo9. 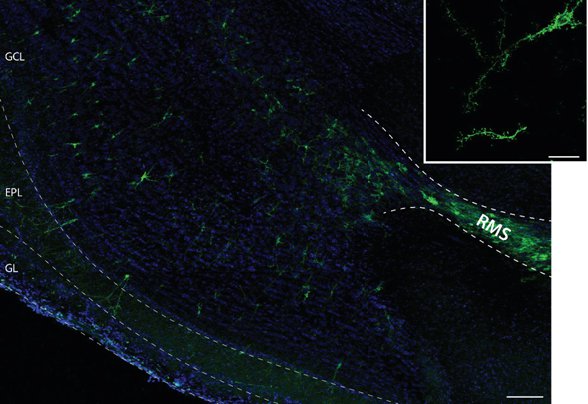 Figure 1. ChR2-YFP expression from lentiviral injection into the rostral migratory stream. Representative confocal images of a saggital sections of the olfactory bulb of a mouse 15 days after injections of a lentivirus in the rostral RMS. Note the presence of scattered YFP newborn neurons migrating from the end of the RMS to the different layers of the OB. Most of newborn cells (95%) are granule cells, which soma lie in the Granule Cell Layer (GCL) and dendrites arborize in the External Plexiform Layer (EPL). A small population of newborn neurons migrate up to the most superficial layer of the OB, in the Glomerular Layer (GL). Scale bar, 100μm. Inset, high magnification of a newborn granule cell, showing the membrane expression of ChR2-YFP in the dendrites as well as in spines. Scale bar, 20μm.

Optogenetic tools have recently increased our control over selective neuronal populations, including adult born neurons in the olfactory system. Here we describe how to perform a stereotaxic injection of a lentiviral vector expressing ChR2-YFP in a specific population of adult-born neurons. By carefully monitoring the period post-injection, we are able to analyze and manipulate the activity of a cohort of adult-born neurons with a relative homogeneous age.

Because of their low diffusion spread, their high transduction efficiency and their relative good tropism for neuroblasts of the RMS, lentiviral vectors should be favored compared to others viral vectors such as retroviruses or adeno-associated viruses (AAV). Because they selectively infect dividing cells, such as stem cells or progenitors, retrovirus vectors must be injected into the subventricular zone and transduce a smaller population of newborn neurons. Compared to lentiviral vectors, AAV vectors provide a much higher spread of infection. However, AAV transduction of neuroblasts in the RMS should be avoided because of the transduction of surrounding structures such as the accessory olfactory nucleus, a region that projects axons back into the olfactory bulb. Lastly, use of implanted LEDs can be applied to other superficial structures of the brain such as cortical regions in which ChR2 expression is driven in specific populations of neurons through viral vectors or via a transgenic mouse line10.

With LED implantation, we are able to apply chronic optical stimulation to study the functional role of olfactory bulb adult neurogenesis in awake behaving animals. This simple light source provides a fast temporal control of light thanks to the intrinsically rapid on/off speed of LEDs. In addition to being inexpensive, a miniature LED light source produces sufficient power (~100mW) for ChR2 activation in a large volume of brain tissue11, even bilaterally in the case of olfactory bulbs. This is particularly important in this brain region where significant lesions may be without effect on odor quality perception due to a high degree of redundancy in the inputs from the olfactory epithelium12. Thanks to its power and its spectral bandwidth (25nm), these miniature LEDs may be used for light-evoked excitation using ChR2 as well as others versions of channelrhodopsins such as ChETA or CatCh. Miniature yellow (597nm) and red (624 or 637nm) LEDs are available to be used for red-shifted rhodopsins such as halorhodopsin and VChR113.

Miniature LEDs also show limitations. To avoid heating the brain, a compromise must be found between pulse duration, pulse frequency, and light intensity. For instance, short light pulses of 5 milliseconds are recommended at high frequencies (>20Hz) and light intensity of 100 mW. Above this duration, a significant elevation of the temperature (~1-4°C) in the surrounding tissue can be measured. This parameter should be taken into account for longer light pulses (>5ms) or continuous light stimulation, notably in the case of light-evoked hyperpolarization using halorhodopsin. In addition, the current supplying the LED provides strong electrical artifact, which may preclude in vivo electrophysiological recordings when the LED is in direct contact with the tissue. Laser-coupled optic fibers constitute a possible alternative, allowing a smaller and more restricted optical stimulation. However, the rigidity of optic fibers may interfere with certain behaviors.

After characterizing of the light penetration and the functional stimulation of neurons by light, in vivo optical stimulation can be triggered in combination with behavioral experiments. Special care should be taken regarding the timing of the stimulation. Synchronization of the photostimulation with a specific behavior or task in a behavioral apparatus, notably during operant conditioning, could be decisive for establishing a causal link between cell activation and behavior. 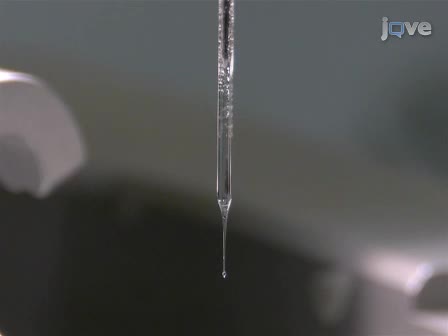