A method for the determination of acetate kinase activity is described. This assay utilizes a direct reaction for determining enzyme activity and kinetics of acetate kinase in the acetate-forming direction with different phosphoryl acceptors. Furthermore, this method can be utilized for assaying other acetyl phosphate or acetyl-CoA utilizing enzymes.

Acetate kinase, a member of the acetate and sugar kinase-Hsp70-actin (ASKHA) enzyme superfamily1-5, is responsible for the reversible phosphorylation of acetate to acetyl phosphate utilizing ATP as a substrate. Acetate kinases are ubiquitous in the Bacteria, found in one genus of Archaea, and are also present in microbes of the Eukarya6. The most well characterized acetate kinase is that from the methane-producing archaeon Methanosarcina thermophila7-14. An acetate kinase which can only utilize PPi but not ATP in the acetyl phosphate-forming direction has been isolated from Entamoeba histolytica, the causative agent of amoebic dysentery, and has thus far only been found in this genus15,16.

In the direction of acetyl phosphate formation, acetate kinase activity is typically measured using the hydroxamate assay, first described by Lipmann17-20, a coupled assay in which conversion of ATP to ADP is coupled to oxidation of NADH to NAD+ by the enzymes pyruvate kinase and lactate dehydrogenase21,22, or an assay measuring release of inorganic phosphate after reaction of the acetyl phosphate product with hydroxylamine23. Activity in the opposite, acetate-forming direction is measured by coupling ATP formation from ADP to the reduction of NADP+ to NADPH by the enzymes hexokinase and glucose 6-phosphate dehydrogenase24.

Here we describe a method for the detection of acetate kinase activity in the direction of acetate formation that does not require coupling enzymes, but is instead based on direct determination of acetyl phosphate consumption. After the enzymatic reaction, remaining acetyl phosphate is converted to a ferric hydroxamate complex that can be measured spectrophotometrically, as for the hydroxamate assay. Thus, unlike the standard coupled assay for this direction that is dependent on the production of ATP from ADP, this direct assay can be used for acetate kinases that produce ATP or PPi.

The overall scheme of this protocol is outlined in Figure 1.

The direct assay can also be used to measure activity of acetate kinases that utilize substrates other than ATP, which is not possible using the standard coupled assay. Purified recombinant E. histolytica acetate kinase16, which produces PPi rather than ATP in the acetate-forming direction, was subjected to this assay using sodium phosphate in place of ADP. The concentration of sodium phosphate in the reaction was held constant at 0.2 mol/L and the acetyl phosphate concentration was varied. As for the M. thermophila acetate kinase, the E. histolytica acetate kinase followed Michaelis-Menten-like kinetics for acetyl phosphate and a hyperbolic saturation curve was observed (Figure 5). The apparent Km value for acetyl phosphate was 0.50 ± 0.006 mmol/L. Reeves and Guthrie15 determined a Km value of 0.06 mmol/L for acetyl phosphate for the native enzyme; however, their enzyme was only partially purified and their assay involved four coupling enzymes which were also only partially purified. Thus, it is difficult to directly compare these values. 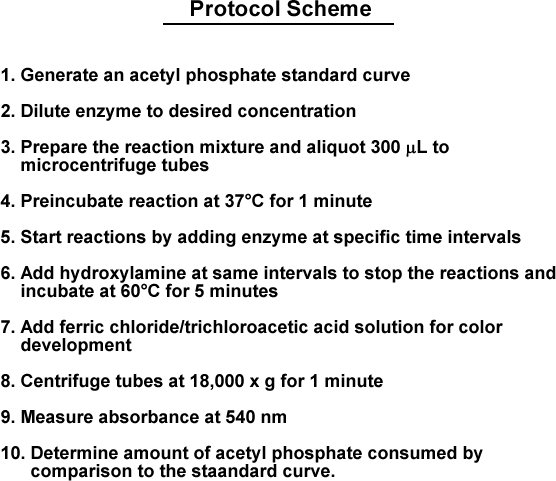 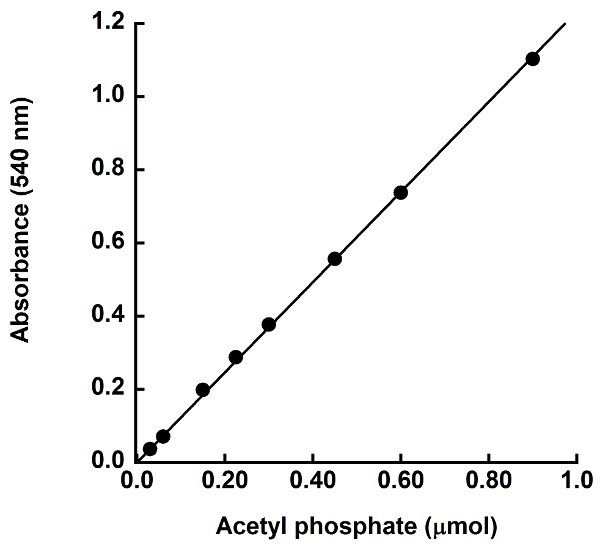 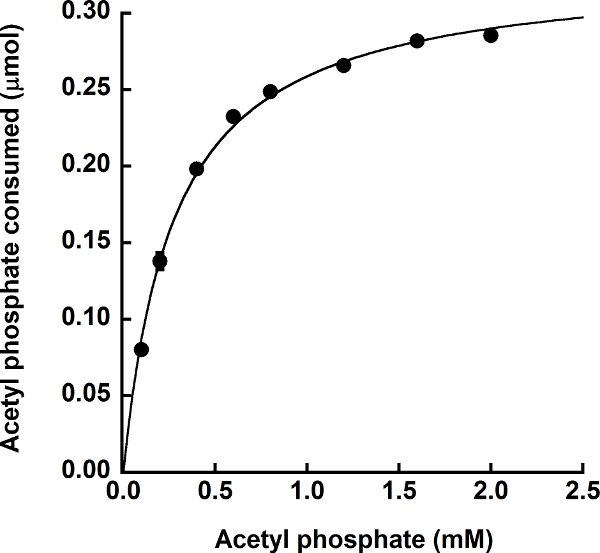 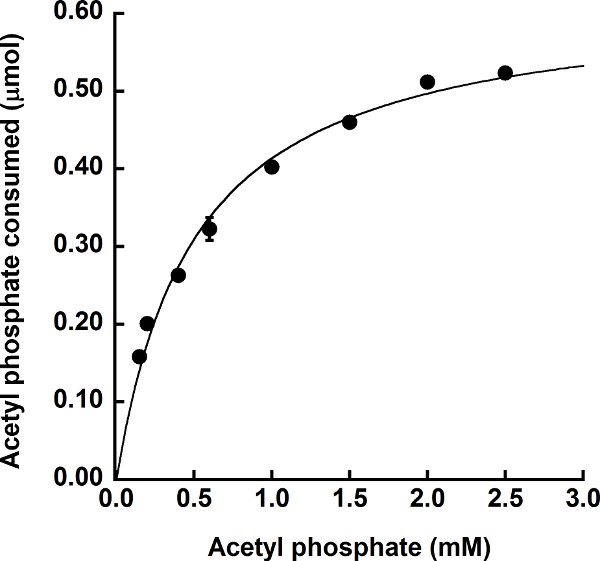 The detection of acetyl phosphate in this assay is dependent upon a sufficient concentration of hydroxylamine hydrochloride and the concentration and acidity of the ferric chloride solution. Alteration of the assay volume will require reconsideration of both of these components. The enzymatic reactions described here were performed at 37°C with the hydroxylamine termination performed at 60 °C for 5 minutes. This higher temperature is critical to allow for rapid conversion of the remaining acetyl phosphate to acetyl hydroxamate. The timing of the color development step and measurement of absorbance is less critical, and can be performed in as little as 5 minutes and up to 15 minutes following the addition of the hydroxylamine solution. The samples should be centrifuged before reading the absorbance, as the acidity of the sample may lead to precipitation of the enzyme and can produce a falsely high reading due to turbidity rather than actual color change. Breakdown of the developed reactions will begin to occur after 10-15 minutes.

Previous methods for measuring acetate kinase activity in the acetate-forming direction involved the use of coupled assays. These methods are problematic with respect to kinetic calculations due to dependence on the activity of the coupling enzyme(s), whose assay conditions (pH, ionic strength, temperature, etc.) may be incompatible with the optimal assay conditions for the enzyme of interest. In addition, use of a direct assay for studies with inhibitors may avoid issues that could arise from inhibition of the coupling enzymes. Overall, this assay should be useful not only for acetate kinase, but for any enzyme that utilizes acetyl phosphate or other activated short chain acyl substrates such as acetyl- or propionyl-CoA, propionyl phosphate, and acetyl-AMP, all of which are reactive with hydroxylamine. In these cases, the standard curve would be generated with the appropriate acyl substrate instead of with acetyl phosphate. 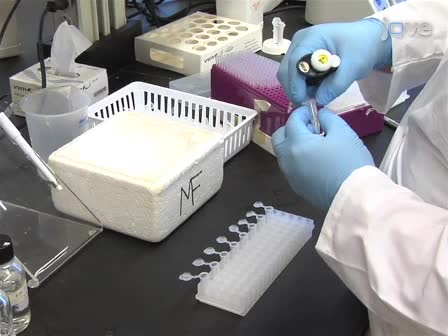