Circulating tumor cells (CTC) are cells that disseminate from a primary tumor throughout the circulatory system and that can ultimately form secondary tumors at distant sites. CTC count can be used to follow disease progression based on the correlation between CTC concentration in blood and disease severity1. As a treatment tool, CTC could be studied in the laboratory to develop personalized therapies. To this end, CTC isolation must cause no cellular damage, and contamination by other cell types, particularly leukocytes, must be avoided as much as possible2. Many of the current techniques, including the sole FDA-approved device for CTC enumeration, destroy CTC as part of the isolation process (for more information see Ref. 2). A microfluidic device to capture viable CTC is described, consisting of a surface functionalized with E-selectin glycoprotein in addition to antibodies against epithelial markers3. To enhance device performance a nanoparticle coating was applied consisting of halloysite nanotubes, an aluminosilicate nanoparticle harvested from clay4. The E-selectin molecules provide a means to capture fast moving CTC that are pumped through the device, lending an advantage over alternative microfluidic devices wherein longer processing times are necessary to provide target cells with sufficient time to interact with a surface. The antibodies to epithelial targets provide CTC-specificity to the device, as well as provide a readily adjustable parameter to tune isolation. Finally, the halloysite nanotube coating allows significantly enhanced isolation compared to other techniques by helping to capture fast moving cells, providing increased surface area for protein adsorption, and repelling contaminating leukocytes3,4. This device is produced by a straightforward technique using off-the-shelf materials, and has been successfully used to capture cancer cells from the blood of metastatic cancer patients. Captured cells are maintained for up to 15 days in culture following isolation, and these samples typically consist of >50% viable primary cancer cells from each patient. This device has been used to capture viable CTC from both diluted whole blood and buffy coat samples. Ultimately, we present a technique with functionality in a clinical setting to develop personalized cancer therapies.

The following protocol is for the production of a single microtube device.

3. Preparation of Microtubes for Cell Isolation

4. Preparation of samples for cell isolation

The goal of this technique is to isolate viable cancer cells from the blood of cancer patients. Several methods exist to identify cancer cells in culture; a necessary verification of device success. We have chosen to stain cells in culture with antibodies against epithelial moieties such as EpCAM (epithelial cellular adhesion molecule) or PSMA (prostate specific membrane antigen), in addition to DAPI to identify intact cell nuclei (Fig. 2 and 3). The number of cancer cells captured using this technique is necessarily a function of the number of CTCs in the starting sample, and patient variability can be high. In processing samples taken from patients diagnosed with stage IV cancers, we routinely capture between 100 and 500 cancer cells per tube of blood, at purities >50%. Immediately following isolation, greater numbers of contaminating leukocytes may be present. However these numbers will be depleted following incubation in culture medium for up to 5 days. 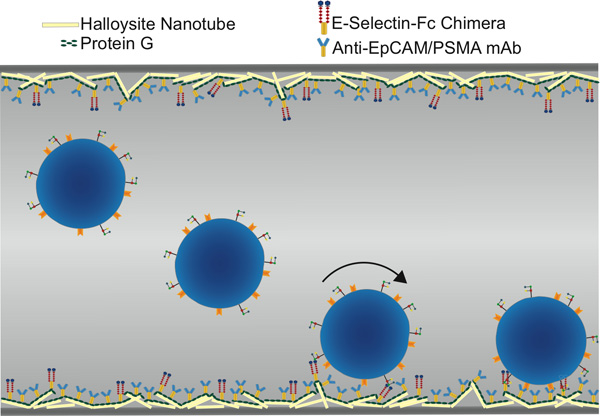 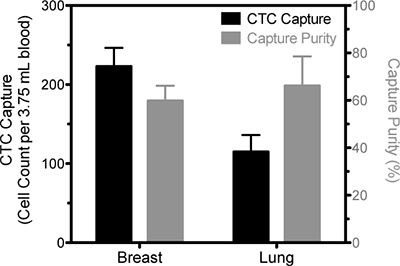 Figure 2. Representative data of CTC isolation from blood samples drawn from a breast cancer patient and a lung cancer patient. The number of viable cells positively identified as CTC based on EpCAM staining is represented by the solid bars and pertain to the left ordinate and the percentage of cells that were identified as CTC compared to the total number of captured cells is represented by the open bars and measured on the right ordinate. Results are following five days in culture. 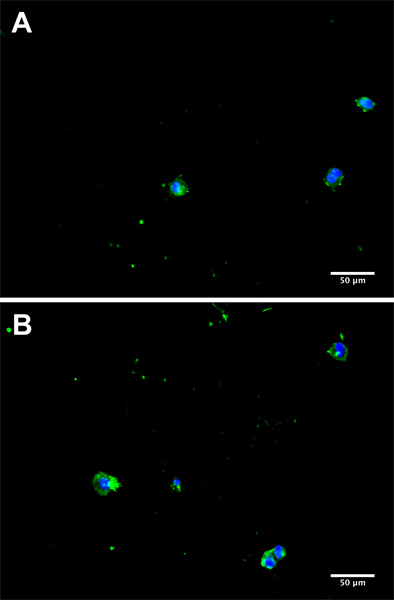 Figure 3. Representative micrographs from separate donors (A and B) of CTC in culture 5 days subsequent to isolation from a cancer patient blood sample. Cells were fluorescently stained for EpCAM with AlexaFluor 488 (green) and 4',6-diamidino-2-phenylindole (DAPI) to visualize the nucleus (blue).

It is often the case that the early steps in the discovery of new cancer therapeutics utilize cancer cell lines, which bear questionable resemblance to primary cancer cells yet remain in use due to their ease of use in the laboratory. Research into the development of new cancer therapies would be expedited if primary human cancer cells were utilized early in novel research. CTC are the most easily accessible type of cancer cell, due to their presence in blood and the ease of a standard blood draw. In addition, circulating tumor cells represent a necessary step in the process of metastasis5,6, so their relevance to the disease and utility for targeting new drugs is clear. Isolation of CTC from blood in vitro is complicated by their low concentrations: on the order of one per million leukocytes or one per billion erythrocytes7. The majority of current methods for detecting CTC in blood, including the only FDA-approved technique CellSearch(Veridex), damage or destroy cells in the detection process, precluding use beyond enumeration. The method described above does not compromise cell viability and thus opens the door for future clinical research on cancer. As the recovery of intact cells is the goal of this technique, it is imperative that cells be handled with care, especially during blood separation steps.

There are a number of tunable parameters in this system that could be altered to achieve improved yield depending on critical characteristics such as cancer type. In the steps described above, we had chosen to use EpCAM as a CTC-specific antibody for all cancer types except when processing prostate cancer samples, wherein anti-PSMA was used. Further substitutions of cancer-specific antibodies can certainly be used to improve performance for individual patients. Furthermore, selectin and antibody concentrations can be altered to enhance capture8.

An essential feature of the device is the incorporation of E-selectin molecules onto the surface. E-selectin is normally expressed on the luminal surface of endothelial cells and function to recruit fast moving leukocytes to sites of inflammation. Flowing leukocytes bind transiently to selectin molecules, resulting in a slower, rolling behavior that facilitates slower and stronger binding of the cell to the endothelium by integrins. Convincing experimental evidence exists that makes the case that CTC can extravasate by a similar mechanism9,10. The inclusion of selectin also allows the device to be operated at greater flow rates, rates that would otherwise prevent cells from binding to antibodies11.Thus our device physiologically mimics a venule to biomimetically capture flowing CTC without inflicting cellular injury.

M.R.K. is a scientific advisor of CellTraffix, Inc. (Rochester, NY). 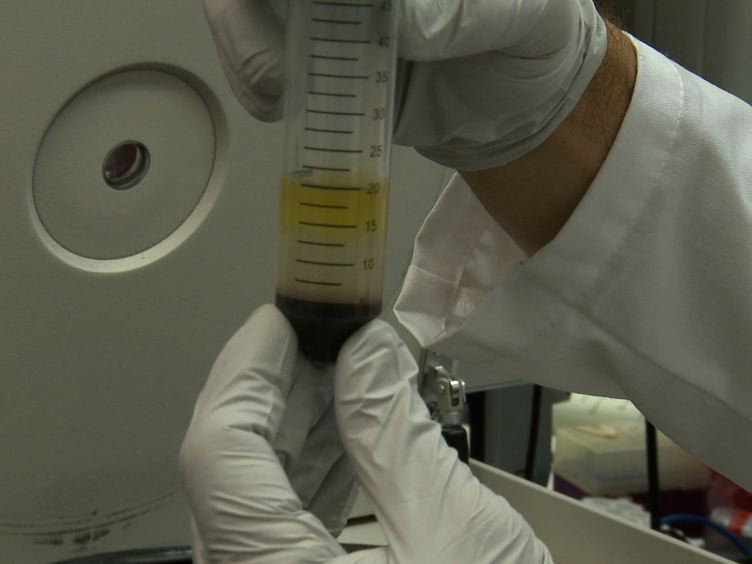