We are presenting an in vivo assay to test blood vessel permeability. This assay is based on intravenous injection of a dye and subsequent visualization of its diffusion into interstitial spaces.

This method is based on the intravenous injection of Evans Blue in mice as the test animal model. Evans blue is a dye that binds albumin. Under physiologic conditions the endothelium is impermeable to albumin, so Evans blue bound albumin remains restricted within blood vessels. In pathologic conditions that promote increased vascular permeability endothelial cells partially lose their close contacts and the endothelium becomes permeable to small proteins such as albumin. This condition allows for extravasation of Evans Blue in tissues. A healthy endothelium prevents extravasation of the dye in the neighboring vascularized tissues. Organs with increased permeability will show significantly increased blue coloration compared to organs with intact endothelium. The level of vascular permeability can be assessed by simple visualization or by quantitative measurement of the dye incorporated per milligram of tissue of control versus experimental animal/tissue. Two powerful aspects of this assay are its simplicity and quantitative characteristics. Evans Blue dye can be extracted from tissues by incubating a specific amount of tissue in formamide. Evans Blue absorbance maximum is at 620 nm and absorbance minimum is at 740 nm. By using a standard curve for Evans Blue, optical density measurements can be converted into milligram dye captured per milligram of tissue. Statistical analysis should be used to assess significant differences in vascular permeability.

Formation and maintenance of selective permeable barriers are essential for proper organ development and performance 1,2. Endothelial cells line the blood vessel lumen and form a semi-permeable barrier that is essential in the selective transport between blood and the interstitial space of all organs. An adequate permeability barrier is maintained through tight cell-to-cell junctions that are strictly controlled by growth factors, cytokines and other stress related molecules 3. Disruption of the endothelial cell barrier can result in increased permeability and vascular leakage. These effects are seen in various disease states and the understanding of the underlining molecular signaling requires multidisciplinary methods 4,5. In this article, we describe an in vivo method to measure vessel permeability using a mouse model.

The assay we are describing, also known as Miles assay, is a well-established method to test vascular permeability in vivo. The assay is based on the fact that, under basal physiological conditions, albumin does not cross the endothelial barrier. Evans Blue, an azo dye with high affinity for albumin, is injected in the blood stream of an experimental animal, and under physiologic conditions, it is expected to be restricted within blood vessels. When a vascular permeability stimulus is added, either topically or systemically, blood vessels start to leak protein and thus, also the Evans blue that is bound to albumin. This results in a rapid bluish coloration of tissues that have permeable vessels.

Successful injection of the dye in the mouse lateral tail vein is critical for the good outcome of the experiment. Tail vein injection technique requires extensive practice and should be mastered prior to starting the experiment.

Vessel permeability is highly dependent on the age and weight of the animal, so when comparing different mouse strains it is imperative that the mice or other test subjects have close to identical birth dates and weight. Other factors that influence the permeability of the endothelial barrier are environmental conditions such as temperature, humidity, and very importantly, the handling stress of the mouse. Due to the multitude of factors that can influence the outcome of the experiment it is always advisable that the experiment is repeated at least three times and statistical analysis performed.

2. Organ Collection and Extraction of Evans Blue from the Organs

We used an in vivo permeability assay to test vessel leakage in mice 8-12 weeks old. This test is useful in comparing the relative vascular permeability between animals of different genetic background or in a single strain of mice subjected to treatments that affect the vasculature. Our results show that a strain of genetically modified mice we created in our lab has a more permeable endothelium compared to wild-type mice. These changes are evident at macroscopic level in many organs (Figure 1). 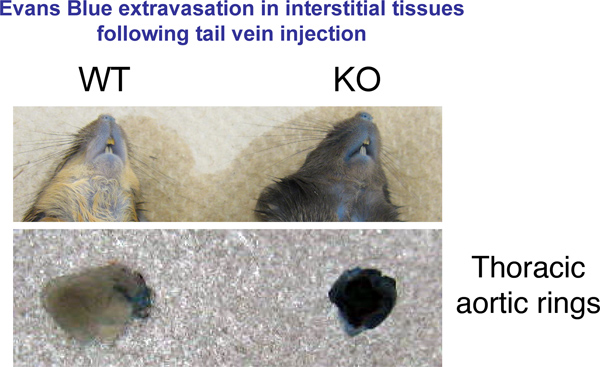 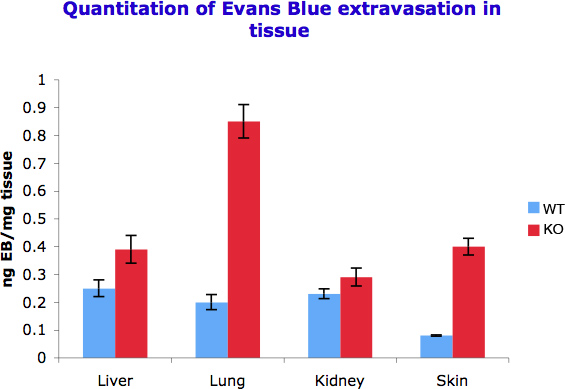 In physiological conditions endothelium is permeable to water and ions, and impermeable to proteins. Thus, in the absence of inflammatory stimuli, albumin is restricted to the blood flow and does not move into the extracellular fluid. By injecting Evans Blue, a dye that binds albumin, we can monitor the extent of protein leakage from the blood stream into the interstitial tissue.

A modified version of this assay uses fluorescent-labeled microspheres. By using different size microspheres or different molecular weight fluorescent- labeled dextran (4-70 KDa) one can better assess the extent of endothelial damage. However, this option eliminates the ease of visualization and it requires fixing the tissues and fluorescent microscopy imaging, or measurement using a fluorescence plate reader.

In vitro studies of vessel permeability have been used successfully in the literature 11. An essential ingredient of any in vitro permeability study is an intact, confluent cell monolayer. These assays use a classic double chamber where endothelial cells are cultured in a monolayer on a permeable membrane situated in the upper chamber. A dye is applied to the upper chamber and endothelial cell permeability is assessed by measuring the amount of dye that reaches the lower chamber. The results mimic in most cases the in vivo assay results. However, they lack the appropriate physiological context and are thereby complicated by the complexity of results. The in vitro approach also eliminates the role of pericytes, cells that, in living tissues, are in close contact with endothelial cells and send signals for endothelial cell proliferation, vessel growth and branching.

The Miles test results should ideally be accompanied by molecular studies that further examine the hypothesis that is being tested. As mentioned, in a whole organism, vascular permeability is dependent on many variables, and thus the results of an in vivo permeability assay need to be interpreted in light of the complexity of the system analyzed.

The authors have no conflict or competing financial interests.

This work was supported by a grant from the National Institutes of Health, R01CA142928. 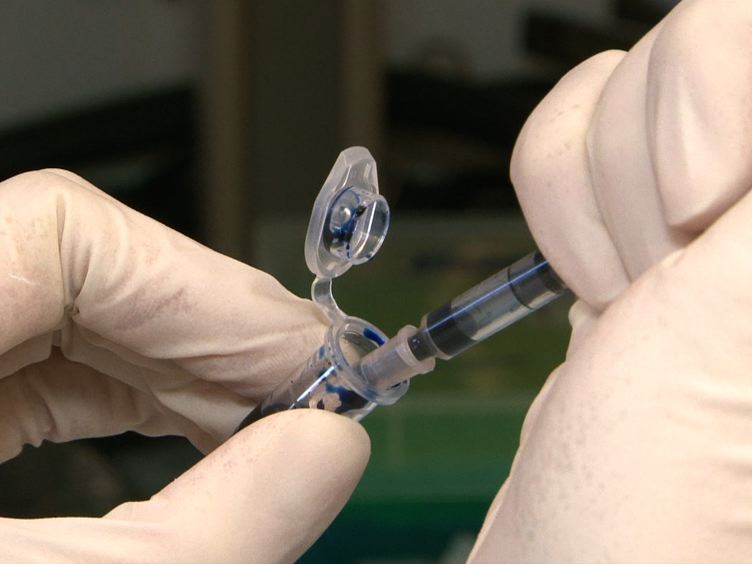