Cultured neonatal cardiomyocytes have long been used to study myofibrillogenesis and myofibrillar functions. Cultured cardiomyocytes allow for easy investigation and manipulation of biochemical pathways, and their effect on the biomechanical properties of spontaneously beating cardiomyocytes.

The following 2-day protocol describes the isolation and culture of neonatal mouse cardiomyocytes. We show how to easily dissect hearts from neonates, dissociate the cardiac tissue and enrich cardiomyocytes from the cardiac cell-population. We discuss the usage of different enzyme mixes for cell-dissociation, and their effects on cell-viability. The isolated cardiomyocytes can be subsequently used for a variety of morphological, electrophysiological, biochemical, cell-biological or biomechanical assays. We optimized the protocol for robustness and reproducibility, by using only commercially available solutions and enzyme mixes that show little lot-to-lot variability. We also address common problems associated with the isolation and culture of cardiomyocytes, and offer a variety of options for the optimization of isolation and culture conditions.

The earliest reports for the successful dissociation and culture of rodent heart cells dates back to the 1960's 1,2. Even then, Harary and Farley noticed that cultured cardiomyocytes "may provide a unique system for the study of the requirements of the periodic contractility [, and may] provide a means of determining the contribution of various metabolic pathways for the [beating] process". Although Harary and Farley isolated and cultured cardiomyocytes from young rats, and the original protocol has been adapted and modified by many scientists over the years, the general isolation and culturing procedure has not greatly changed. However, better enzymes 3, standardized solutions 4,5, and the addition of the reversible channel and myosin ATPase inhibitor BDM to protect cells during the isolation procedure 6-9 has significantly improved cell-yield and viability.

With many uses for the investigation of morphological, electrophysiological, biochemical, cell-biological and biomechanical parameters as well as for the process of myofibrillogenesis, cultured neonatal cardiomyocytes have become one of the most versatile systems for the study of cardiac cell functions in vitro. The first step to a successful assay however, depends on an easy and reliable methodology to isolate neonatal mouse cardiomyocytes. Our protocol draws its methodology from many sources and was optimized for reproducibility and robustness. We discuss factors that influence cardiomyocyte-yield and viability, and provide a variety of options for the optimization of isolation and culture conditions.

The following procedure describes a two-day protocol 16,17 for the isolation and culture of neonatal mouse cardiomyocytes. All solutions are sterile or sterile filtered. All tools are sterilized by surface sterilization with 75% ethanol. Except for the initial tissue extraction, all steps are performed in a sterile laminar flow cell culture hood. This protocol is intended for the isolation of neonatal mouse hearts from one-two litter(s) - approximately 5-14 pups, but may be adapted for larger litter sizes and rat neonatal cardiomyocytes. Scale media/enzyme usage as appropriate.

For work with neonatal rodents, refer to your local university guidelines and rules set forth by the legislature and/or animal care programs, and adhere to your institutionally approved animal protocol. All methods described in this protocol have been approved by the UC San Diego Institutional Animal Care and Use Committee (IACUC), and adhere to federal and state regulations.

Technical comment: We recommend usage of a collagenase/dispase mixture from Roche (Cat.No.: 10269638001) that has very little lot-to-lot variability. The classical enzyme for the isolation of mouse cardiomyocytes is trypsin and/or collagenase type II 3,16-20 available from Worthington (Cat No CLS-2). However, performance of collagenase II may differ substantially from lot-to-lot. Worthington typically allows for the testing of several collagenase lots to optimize digestion times and enzyme usage. Alternatively, Worthington sells a cardiomyocyte isolation kit with a pre-tested enzyme mixture included that can be adapted for the isolation of mouse cardiomyocytes 17 (Cat No.: NCIS).

Using this protocol, we isolated hearts from 8 one day old neonatal mice (Figures 1A, 1B, Supplemental Movie S1). After washing and mincing the hearts with scissors (Figures 1C-1F), tissue fragments were predigested in isolation medium over night at 4 °C with gentle agitation. Following predigestion (Figure 1G), we transferred the tissue fragments into freshly made digestion medium, and incubated the tissue fragments for 20 min at 37 °C with gentle agitation. The resulting cell suspension (Figure 1H) was filtered through a cell strainer (Figure 1G). Following centrifugation, the pelleted cells were resuspended in 8 ml plating medium and preplated into a 10 cm cell culture dish (Figure 2A), and cultured for 2 hr to allow for attachment of cardiac fibroblasts and endothelial cells (Figures 2B, 2C). Cells that did not rapidly attach were resuspended into the plating medium. 10 μl of the cell suspension containing cardiomyocytes was pipetteted into an eppendorf tube and stained with a trypan blue solution in a 1:1 ratio. Cells were counted using an automated cell counter, resulting in approximately 5.1 x 105 living cells/ml plating medium. After counting, cells were plated into four 30 mm collagen coated cell culture dishes (2 ml per dish), resulting in approximately 1 x 106 plated cells per dish (1.4 x 105 cells/cm2; Figure 2D). 18 hr after plating, cardiomyocytes were attached to the collagen coated cell culture dishes (with approximately 70% confluency) and started to contract spontaneously (Figure 2E, Supplemental Movie S2). Subsequently, cardiomyocytes were either used for liposomal transfection (see Table 1) or the cells were directly transferred from the plating into the maintenance medium (Figure 2F) and cultured for another 3 days. Following culture, cardiomyocytes were briefly washed in 1x PBS, fixed for 5 min in 4% PFA/PBS and processed for immunofluorescence as described in one of our recent publications 22. Representative results depicting immunologically stained untransfected and transfected cardiomyocyte cultures are shown in Figures 2G and 2H, respectively. The cultured neonatal cardiomyocytes display the expected cytoarchitecture, as evident from the visualization of the myofibrils (red signal in Figure 2G) and the intercalated disk-like structures (green signal in Figure 2G). They are also amenable to transient transfections, as seen in Figure 2H (green signal is the transfected protein; red signal counterstaining of myofibrils using an alpha-sarcomeric actinin antibody). 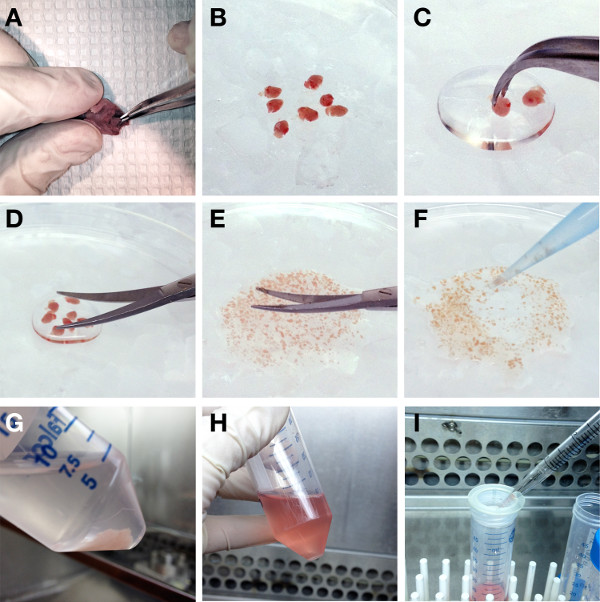 Figure 1. Isolation of cardiac tissue from neonatal mice. A) The heart is carefully removed from the thorax using curved forceps (see also Supplemental Movie S1). B) Hearts isolated from 8 neonates are washed in 1x PBS (without Ca2+, Mg2+) supplemented with 20 mM BDM on ice. C) Hearts are transferred into a drop of isolation medium. D-E) Mincing of neonatal hearts using curved scissors. F) Transfer of minced cardiac tissue using a pre-wetted pipette. G) Predigested cardiac tissue after over-night incubation at 4 °C. H) Cardiomyocytes in suspension after 20 min of digestion and trituration. Undigested cardiac tissue accumulates at the bottom of the tube. I) The suspension of isolated cardiomyocytes is filtered through a cell strainer. 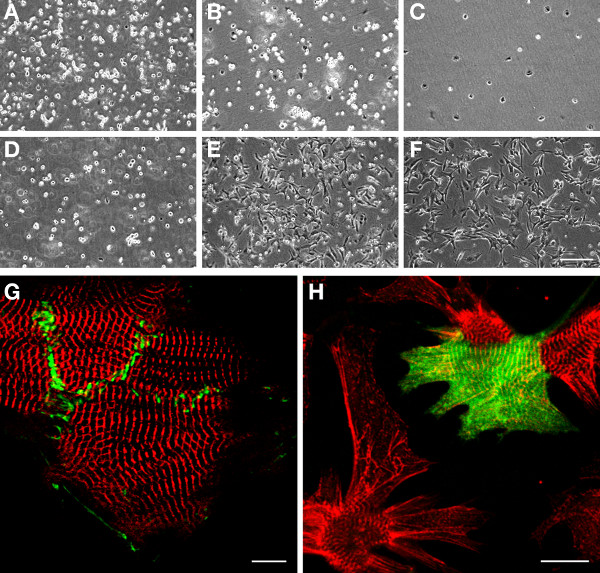 Figure 2. Culture of neonatal mouse cardiomyocytes and representative immunofluorescence images. A) Plating of isolated cells at the beginning of the pre-plating step. B) Cardiac fibroblasts and endothelial cells start to adhere to the uncoated cell culture dish after 1-3 hr of culture during the pre-plating step. C) After resuspension of non-adherent cardiomyocytes, remaining cardiac fibroblasts and endothelial cells can be further cultured, if desired. D) Plating of isolated and purified neonatal mouse cardiomyocytes in collagen coated cell-culture dishes. E) After 18 hr in culture, cardiomyocytes adhere to the coated dishes, and optimally start spontaneous contractions (see also Supplemental Movie S2). F) Replacing the plating medium with maintenance medium removes dead cells from the culture. A)-F) Scalebar 0.2 mm. G) Representative immunofluorescence image of neonatal mouse cardiomyocytes, stained with antibodies against myomesin (Developmental Studies Hybridoma Bank, Iowa, mMaC myomesin B4, in red) and beta-catenin (Sigma, Cat.-No.: C2206, in green). Scalebar 10 μm. H) Representative immunofluorescence image of transfected neonatal mouse cardiomyocytes with the expressed GFP-tagged protein in green (GFP-titin-N2B fragment), and alpha-actinin (Sigma, Cat.-No.A-7811) in red. Scalebar 20 μm. A method for the transfection and immunological staining used in 2G) and 2H) can be found in Table 1, and is summarized in one of our recent publications 22.

Table 2. Troubleshooting. Many factors can affect the successful isolation and culture of primary cells. Please consult manuals such as "Culture of Animal Cells" by Ian Freshney 21, as general introductions into basic cell culture techniques. Possible causes for problems in the isolation and culture procedur of neonatal mouse cardiomocytes that we encountered most often are listed in this table.

We are grateful to Prof. emeritus Jean-Claude Perriard and Evelyn Perriard (Swiss Federal Institute of Technology, Switzerland) for the introduction into isolation techniques for neonatal rat and mouse cardiomyocytes. We would like to thank Prof. Ju Chen and Prof. Sylvia Evans (UCSD, USA) for their support. Work in the laboratory of EE was funded by an MRC Career Establishment Grant. SL is supported by a K99/R00 pathway to independence award from the NIH/NHLBI (HL107744). TMM was supported by a postdoctoral fellowship from the American Heart Association (11POST7310066). 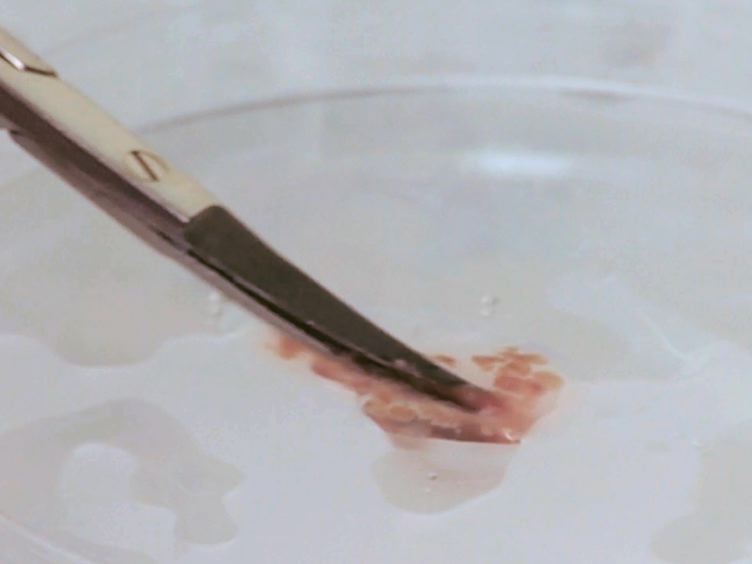