We have modified the conditions for DFAT cell generation and provide herein information regarding the use of an improved growth medium for the production of these cells.

Tissue engineering and cell therapy hold great promise clinically. In this regard, multipotent cells, such as mesenchymal stem cells (MSCs), may be used therapeutically, in the near future, to restore function to damaged organs. Nevertheless, several technical issues, including the highly invasive procedure of isolating MSCs and the inefficiency surrounding their amplification, currently hamper the potential clinical use of these therapeutic modalities. Herein, we introduce a highly efficient method for the generation of dedifferentiated fat cells (DFAT), MSC-like cells. Interestingly, DFAT cells can be differentiated into several cell types including adipogenic, osteogenic, and chondrogenic cells. Although other groups have previously presented various methods for generating DFAT cells from mature adipose tissue, our method allows us to produce DFAT cells more efficiently. In this regard, we demonstrate that DFAT culture medium (DCM), supplemented with 20% FBS, is more effective in generating DFAT cells than DMEM, supplemented with 20% FBS. Additionally, the DFAT cells produced by our cell culture method can be redifferentiated into several tissue types. As such, a very interesting and useful model for the study of tissue dedifferentiation is presented.

Cell therapy and tissue engineering are hot topics in the field of regenerative medicine1-5. While these therapeutic modalities hold great promise, several technical issues currently hamper their clinical use. In this regard, as in the generation of iPS cells, all tissue engineering therapies must produce cells free of external gene transductions in order to maintain patient safety. Accordingly, we were the first group to successfully produce human DFAT cells6. Several other research groups have since adopted our method to generate DFAT cells of mammalian origin7-9, further highlighting the usefulness of our model.

Over the course of several studies, we have found that the quality of the cell culture environment may be modified by adjusting the content of the cell medium. This finding has led to an increase in the success rate of DFAT cell production and improved cell quality; both critical factors in efficiently generating cells for future clinical trials. In this regard, an improved DFAT culture medium (DCM, a medium similar to mesenchymal stem cell medium, which contains recombinant human insulin, serum albumin, L-glutamic acid, several fatty acids, and cholesterol) and a method for DFAT cell generation and proliferation was developed (more information about the contents of DCM is available upon request). Using this method high quality DFAT cells were generated with the ability to differentiate into several cell types including adipogenic, osteogenic, and chondrogenic cells. Altogether, this validated cell culture protocol enhances the quality of DFAT cells and may be quite useful for enhancing clinical applications of cell therapy and tissue engineering.

In this study, the method and toolkit for DFAT cell generation was improved (Figure 1). Our method allows us to generate DFAT cells using both DCM and DMEM medium containing 20% FBS (Figure 2A). As such, we compared the efficiency of DCM and DMEM in generating DFAT cells. In this regard, DCM enhanced DFAT cell proliferation by three times when compared to DMEM, regardless of the number of adipocytes (Figure 2A and B). Using 20% FBS also enhances cell growth when compared to protocols using 10% FBS (data not shown). We further confirmed that DFAT cells produced using DCM have the ability to redifferentiate into adipocytes and differentiate into osteoblasts (Figure 3). The method for the assays is described in our previous study6. 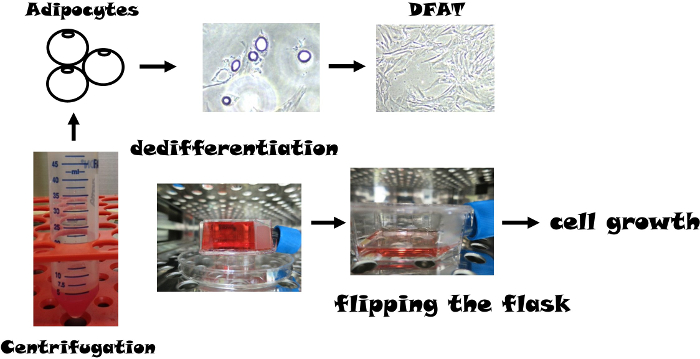 Figure 1: A schematic depicting the isolation, dedifferentiation, and culture of mature adipocytes. A small piece of adipose tissue was digested with 0.1% collagenase. After centrifugation, unilocular adipocytes were isolated from the floating layer. The isolated cells were cultured in flasks filled with medium containing 20% FBS for 7 days. During culture, the cells attached and flattened to the upper surface of the flasks and then were converted to DFAT cells. Next, the flasks were inverted and DFAT cells were cultured using conventional methods. Please click here to view a larger version of this figure. 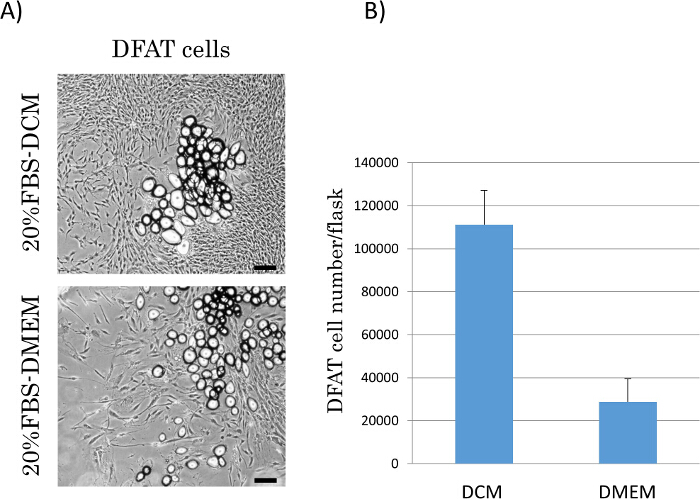 Figure 2: DCM enhances DFAT cell generation. (A) DFAT cell colonies following 14 days of culture in DMEM or DCM. Scale bar = 200 μm (B) DFAT cell proliferation quantification in either DMEM or DCM (mean ± SD, n = 3). The efficiency of DCM and DMEM in generating DFAT cells was compared. Enhanced cell proliferation is observed with use of DCM. We quantified the proliferation of DFAT cells using a cell counter, as per the manufacturer's directions. Please click here to view a larger version of this figure.

Mature adipocytes that undergo in vitro dedifferentiation, a process known as ceiling culture, may revert to a more primitive phenotype and gain proliferative abilities. These cells are referred to as dedifferentiated fat (DFAT) cells. The multilineage differentiation potential of DFAT cells was evaluated. Flow cytometry analysis and gene expression analysis revealed that DFAT cells were highly homogeneous in comparison to ASCs6. In fact, the cell-surface antigen profile of DFAT cells is very similar to those found in ASCs6. Accordingly, DFAT cells may function similarly to MSCs.

The other group which has successfully generated DFAT cells utilized a DMEM F12 cell culture medium supplemented with 20% calf serum7-8. Although we attempted to produce DFAT cells using a cell culture medium supplemented with 10% FBS, the number of DFAT cells produced with this protocol was significantly lower than when supplemented with 20% FBS (data not shown). Therefore, the FBS concentration and/or its contents is important for either dedifferentiation of DFAT cells and/or proliferation of DFAT cells. As part of a future study, we will attempt to further elucidate the mechanism by which serum content governs DFAT cell generation and proliferation. On the other hand, DCM contains less glucose, fatty acids and other chemicals than the DMEM used in our study. This variability in cell culture medium constituents may modulate the efficiency of both DFAT cell generation and growth. In fact, low glucose concentration slightly improves the efficiency of DFAT cell generation when using DMEM (data not shown). Although the precise mechanisms underlying DCM's effect on DFAT cell generation and growth are unknown, we postulate here that the concentration of certain medium constituents drives these cellular events. Further studies are needed to clarify this point. Moreover, since we have tested a limited number of DMEM formulations, further experiments are required to compare the efficiency of other DMEM variations (e.g., DMEM containing L-glutamine or pyridoxine) in producing DFAT cells.

Although we are able to produce DFAT cells, the molecular mechanisms governing DFAT cell generation is still unclear. Similar questions surround the production of iPS cells11. As such clinical use of these therapeutic modalities will require further exploration of cell state regulatory mechanisms. Accordingly, we strongly believe that DFAT cells provide a model for elucidating how cells return to a stem cell-like state, free of external gene transductions. DFAT cell production protocols are therefore, being optimized currently for use in future clinical trials.

Ensuring that collagenase treatment and fat cell isolation are both performed properly is a key factor in successfully generating DFAT cells using this protocol. Appropriate use of fine scissors and removal of bubbles during culture also aid in enhancing DFAT cell proliferation.

This research was supported in part by Program for Creating Start-ups from Advanced Research and Technology (START Program) from the Japan Society for the Promotion of Science (ST261006IP, TM) and by Program for the Strategic Research Foundation at Private Universities (2014-2019) (S1411018, TM) from the Ministry of Education, Sports, Science and Technology. 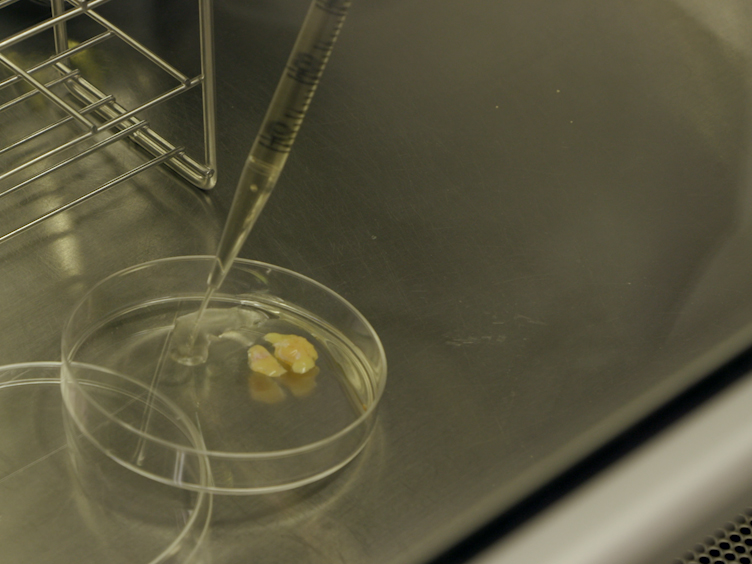