Cytogenetics is the field of study devoted to chromosomes, and involves the direct observation of a cell’s chromosomal number and structure, together known as its karyotype. Many chromosomal abnormalities are associated with disease. Each chromosome in a karyotype can be stained with a variety of dyes to give unique banding patterns. More recent techniques, including comparative genomic hybridization and fluorescence in situ hybridization (FISH), allow for detecting specific chromosomal features or abnormalities.

This video will begin by examining the principles of these classical and modern cytogenetics techniques. This is followed by an examination of a general protocol for performing FISH. Finally, several examples of how karyotyping can be applied to various medical applications are presented.

Cytogenetics is the study of the structure and properties of chromosomes, as well as their behavior during cell division and their role in heredity. A chromosome, which is a molecule of DNA and its associated proteins, may be observed under a microscope with the aid of dyes and probes. Such observations are a powerful approach for detecting defects in chromosome structure and number, which are often associated with diseases and disorders.

This video will cover the principles of cytogenetics, a protocol for a widely used technique to highlight specific chromosome features, known as fluorescence in situ hybridization, and some applications of this technique.

Let’s begin by discussing the importance of cytogenetics and the principles behind some classical and modern techniques in the field.

Many diseases and disorders result from chromosomal abnormalities. For example, the Philadelphia chromosome, which results from a reciprocal translocation between parts of chromosomes 9 and 22, is associated with chronic myelogenous leukemia. Another example is Trisomy 21, the most common cause of Down syndrome, in which an extra copy of chromosome 21 is inherited.

Karyotyping is usually performed on cells that are preparing to divide, when their chromosomes are condensed and can be easily distinguished.

Chromosomes in a karyotype can be treated with stains that reveal distinctive banding patterns. Stained chromosomes may then be arranged by size and shape for karyotype analysis. Several dyes may be applied to highlight specific chromosomal features. Staining with Giemsa, or G-banding, marks densely packed, usually gene-poor regions rich in A-T bases. R-banding is a reverse Giemsa stain that highlights chromosomal regions rich in G-C bases. C-banding highlights the densest chromosomal regions around the centromere, the structure which joins the identical halves of a duplicated chromosome, whereas T-banding highlights the ends of chromosomes, or telomeres.

Another technique, called fluorescence in situ hybridization, or FISH, permits detection of specific chromosomes, regions of DNA, or RNA transcripts. This is achieved by incubating a sample with highly specific oligonucleotide probes that are fluorescently labeled. Because these probes may be hybridized to uncondensed chromosomes in non-dividing cells, FISH may be more broadly applied than classical karyotyping methods.

Finally, researchers have also developed a method called comparative genomic hybridization to screen for missing or duplicated chromosomal regions. Genomic DNA from a test and control subject are isolated, fragmented, and labeled with different colored fluorophores. The fragmented genomic preparations are then mixed and competitively hybridized to a normal chromosome spread. Colors on the resulting karyotype indicate whether a region is duplicated in the test sample, which generates more fragments to bind the spread, or if the region is deleted, resulting in preferential binding to the more abundant control fragments.

Now that you understand the principles of cytogenetics, let’s put them into practice and take a closer look at how FISH is performed.

First, isolated tissues or cells are treated with a fixative such as paraformaldehyde to preserve chromosome morphology and integrity. Next, a chromosome spread is prepared, for example by mechanically disrupting the material. The chromosomes are then dehydrated in a solution series of increasing ethanol concentrations, and permeabilized in a pepsin solution to make target sequences more accessible to the probes. Chromosomes are then washed and stabilized with a postfix, denatured with formamide so that the now single-stranded DNA can bind the probes, and dehydrated in a second series of increasingly concentrated ethanol solutions.

Fluorescently-labeled, highly specific DNA probes are prepared and mixed with unlabeled repetitive DNA fragments to block non-specific binding. The probe is then applied to the chromosome spread, where it hybridizes to its target sequence, and unbound probe is removed with a series of washes.

Finally, the chromosomes are mounted in a medium that preserves the sample and contains a general DNA counterstain, such as DAPI that labels background genomic DNA, and a coverslip is applied. At this point, the samples may be observed under a fluorescence microscope using the appropriate filter sets to visualize genomic DNA and sequence-specific features.

After seeing how FISH is performed, let’s look at some applications of this powerful technique.

FISH may be used to confirm that an embryo’s karyotype is normal prior to implantation. Here, a single cell, known as a blastomere, was biopsied from an embryo three days after fertilization, then lysed and fixed directly on a microscope slide. The chromosome spread was then hybridized to probes specifically selected to identify potential chromosomal disorders. In this case, deviations from the expected pattern of hybridization signals indicate disruptions in chromosome number or structure.

Finally, rather than separating the probes into different windows on a slide, all chromosomes can be labeled and then detected together using an approach called spectral karyotyping or SKY. Multiple chromosome-specific probes with different fluorescent labels were hybridized to every chromosome, giving each one a unique spectral color. Concurrent observations of the combined chromosomes mixture are particularly useful for identifying karyotype defects, and may be used to identify aneuploidy as well as chromosomal deletions and translocations.

You’ve just watched JoVE’s video on cytogenetics. In this video, you learned about the principles of cytogenetics, techniques such as karyotyping and FISH that are used to highlight specific chromosome features, and applications of these techniques. Recent advances in cytogenetics have increased their capabilities in research and pathology laboratories alike, and they will continue to find widespread use at the forefront of disease research and diagnostics. Thanks for watching! 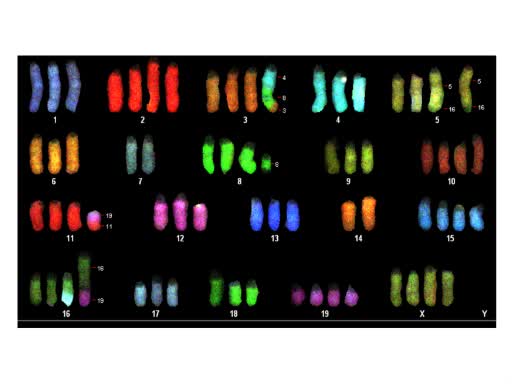