This protocol aims to describe a method to examine the Ca2+ retention capacity and Ca2+- triggered mitochondrial swelling of isolated mitochondria of SH-SY5Y cells step-by-step.

Ca2+ retention capacity is the measurement of the ability of mitochondria to uptake cytosolic calcium. Mitochondria can buffer the cytosolic free calcium and regulate calcium-dependent cellular processes by calcium uptake in the form of inactive precipitates. Impaired Ca2+ retention capacity occurs in stress phenomena associated with energy limitation and even neurodegenerative diseases4,5. Isolated mitochondria or digitonin-permeabilized cells can be used to identify the Ca2+ retention capacity, and the elevated ability to accumulate Ca2+ by isolated mitochondria with the additonal glutamate and malate is not effected by the mitochondrial isolation procedure6. A titrated amount of digitonin should be used to permeabilize the plasma membranes of different cell types. The hexapotassium salt of Ca2+-binding green fluorescent dye, a Ca2+-sensitive cell-impermeant visible light-excitable indicator, has been widely used7. Ca2+-binding green fluorescent dye is a low-affinity indicator and used to show that intracellular free Ca2+ concentrations continue to rise during prolonged (5 min) stimulations8. This method was less sensitive than the radioactive filter technique but was greatly simplified. The additional Ca2+ elevates calcium green fluorescence and the Ca2+ uptake by mitochondria returns the fluorescence to baseline. Sequential additions of Ca2+ were made until the mitochondria failed to uptake extramitochondrial Ca2+ 9. A fluorescence microplate reader can be used to continuously report the calcium green fluorescence.

NOTE: All solutions and equipment should be precooled to 0 - 4 °C and kept on ice.

Representative Results of Ca2+-induced Mitochondrial Swelling:
Results were expressed as percentage changes in absorbance at 540 nm versus initial absorbance during a period of 10 min after the addition of CaCl2. Triggered by the addition of Ca2+ (500 nmol/mg mitochondrial protein), the decreased absorbance monitored at 540 nm indicated the mitochondrial swellings. With the treatment of BKA or ATR, the calibration curve showed a slight or sharp decrease compared to initial absorbance, indicating that BKA can inhibit mPTP opening while ATR can facilitate the mPTP opening (Figure 4). 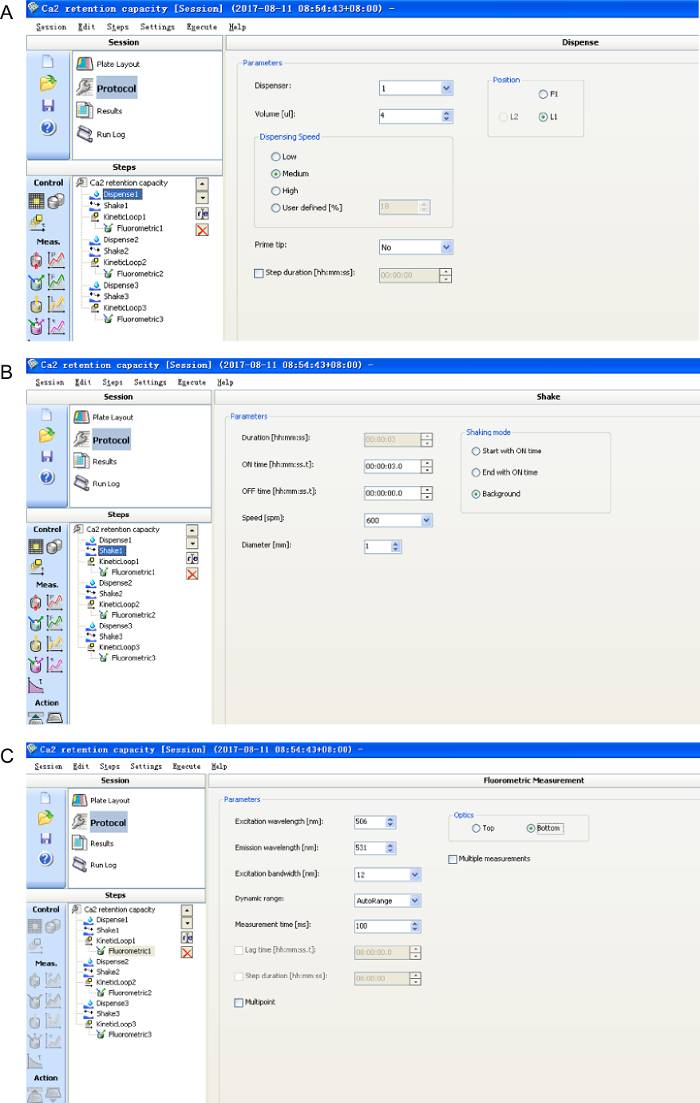 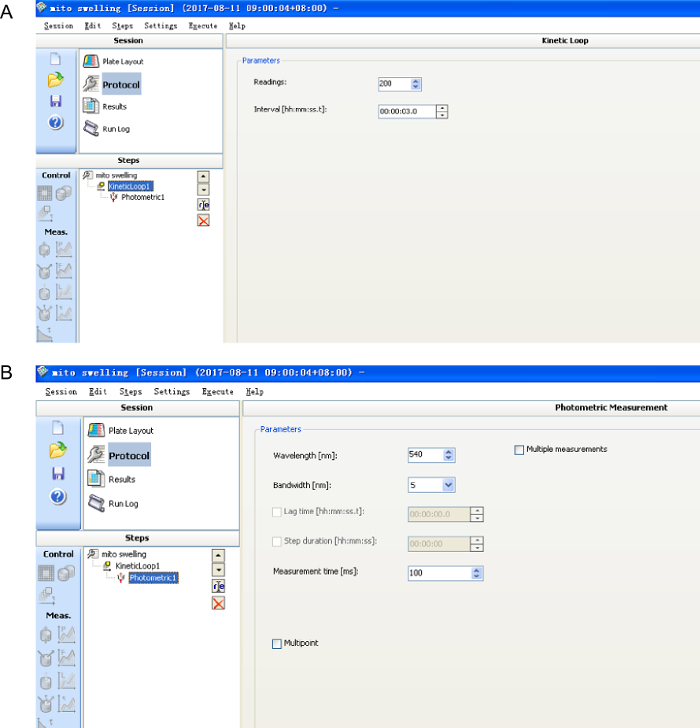 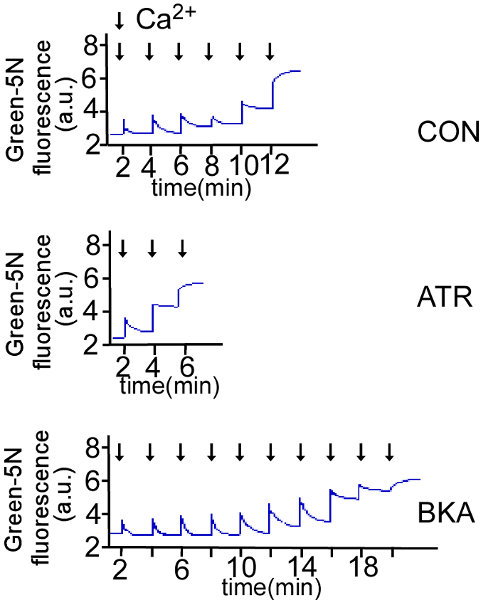 Figure 3: The measurement of Ca2+ retention capacity. Extra-mitochondrial Ca2+ in isolated mitochondria was measured fluorometrically with the Ca2+-binding green fluorescent dye in the presence of 5 μM bongkrekate (BKA), 1 μM atractyloside (ATR), or blank control (CON). Traces of Ca2+ retention by isolated mitochondria with BKA, ATR, and CON were measured at 506 nm (Ex) and 531 nm (Em) on a microplate reader. Please click here to view a larger version of this figure. 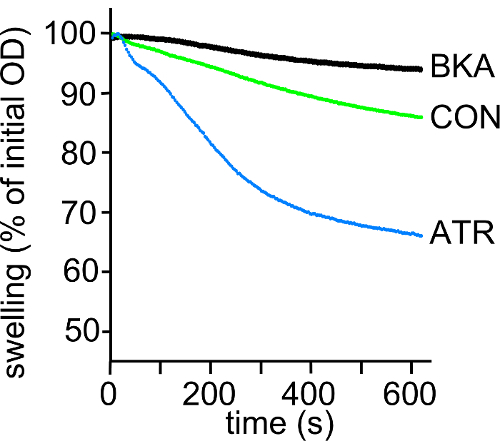 Figure 4: The measurement of Ca2+-induced mitochondrial swelling. Ca2+-induced mitochondrial swelling of SH-SY5Y in the presence of 5 μM bongkrekate (BKA), 1 μM atractyloside (ATR), or blank control (CON) was expressed as a percentage decreased calibration curve of the initial absorbance at 540 nm. Please click here to view a larger version of this figure.

Here, we described a simple and effective protocol for the mitochondrial Ca2+ retention capacity assay and Ca2+-triggered mitochondrial swelling assay.

For the mitochondrial isolation, make sure that all the materials and tubes are on ice, especially when homogenizing the cells. 0.25% trypsin-EDTA can also be used to detach cells from the dish for 5 min at 37 °C. After 15 - 25 strokes, it is necessary to observe the intact cell membrane under the microscope and avoid the breakage of the mitochondria membrane. However, the isolated mitochondria that we obtained are crude mitochondria and purified mitochondria can be obtained through 1.0 M/1.5M discontinuous sucrose gradient. The biological characteristics of mitochondria in living cells are more like those in vivo than in isolated mitochondria because of the concentrations of the medium components that surround the mitochondria. The mitochondrial Ca2+ retention capacity or Ca2+-triggered mitochondrial swelling assay was determined under energized conditions. For determination of functioning mitochondria, 5 mM succinate can be added as respiratory substrates instead of glutamate and malate6.

Ca2+-binding green fluorescent dye (binds Ca2+ with an affinity of 4.29 ± 0.67 mM), is more suitable to measure micromolar concentrations of Ca2+ than higher affinity dyes such as fura-2 7. After the addition of the Ca2+-binding green fluorescent dye, the incubation must be less than 240 s. Successive additions of Ca2+ (varying from 25 - 200 nmol) were injected at 1 - 3 min intervals. The calibration curves show the concentrations of Ca2+ that the mitochondria are unable to sequester, indicating the mitochondrial uptake of pulses of Ca2+. Otherwise, the Ca2+-binding green fluorescent dye was also used in calcium signaling investigations, such as intracellular free Ca2+ concentration measurement, following Ca2+ influx and release, and multiphoton excitation imaging of Ca2+ in living tissues.

This study was supported by grants from grant of the Outstanding Scientist of Shandong (JQ201421) and grant from NSFC (81371226). 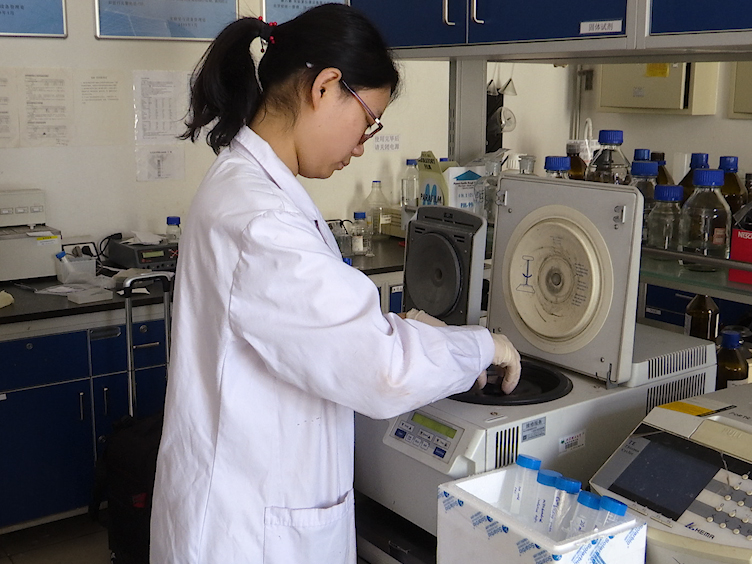