Drying a nanoparticle dispersion is a versatile way to create self-assembled structures of nanoparticles, but the mechanism of this process is not fully understood. We have traced the trajectories of individual nanoparticles using liquid-cell transmission electron microscopy (TEM) to investigate the mechanism of the assembly process. Herein, we present the protocols used for liquid-cell TEM studies of the self-assembly mechanism. First, we introduce the detailed synthetic protocols used to produce uniformly sized platinum and lead selenide nanoparticles. Next, we present the microfabrication processes used to produce liquid cells with silicon nitride or silicon windows and then describe the loading and imaging procedures of the liquid-cell TEM technique. Several notes are included to provide helpful tips for the entire process, including how to manage the fragile cell windows. The individual motions of nanoparticles tracked by liquid-cell TEM revealed that changes in the solvent boundaries caused by evaporation affected the self-assembly process of nanoparticles. The solvent boundaries drove nanoparticles to primarily form amorphous aggregates, followed by flattening of the aggregates to produce a 2-dimensional (2D) self-assembled structure. These behaviors are also observed for different nanoparticle types and different liquid-cell compositions.

The liquid-cell is composed of a top chip and a bottom chip, which are equipped with silicon nitride windows that are transparent to an electron beam with a thickness of 25 nm. The top chip has a reservoir for storing the sample solution and evaporated solvent. The chips are made via conventional microfabrication processing25. The masks used for the top and bottom chips are shown in Figure 1a and 1b, respectively. Figure 2a and 2b show images of the top and bottom chips, respectively. The chips are separated by a 100 nm-thick spacer to allow the nanoparticle solution to be loaded (Figure 1c). We also fabricated silicon liquid-cells from SOI wafers. Through the patterning and etching process, liquid-cells having silicon windows with a thickness of 25 nm are obtained. The fabrication processes for silicon nitride and silicon liquid-cells are shown in Figure 3.

Figure 1: Brief illustration of the three masks used for patterning the (a) top chips, (b) bottom chips, and (c) spacers. Please click here to view a larger version of this figure. 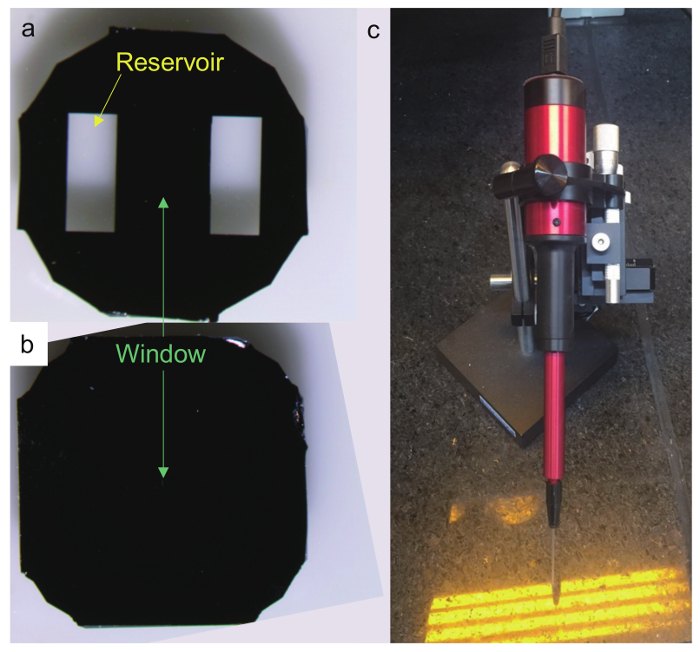 Figure 2: Optical microscopy image of (a) a top chip and (b) a bottom chip. (c) Image of the loading instrument equipped with an ultrathin capillary. Please click here to view a larger version of this figure. 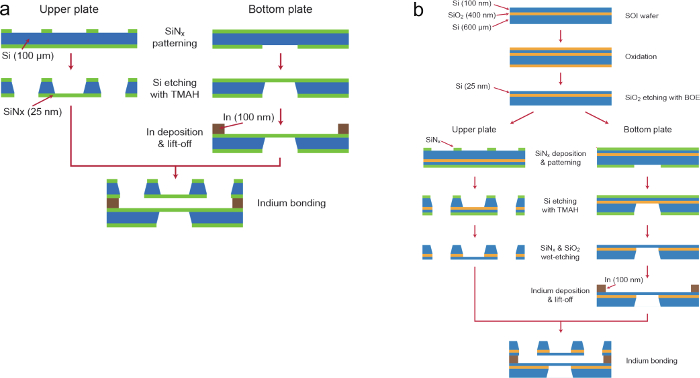 Figure 3: Schematic diagram of fabrication processes of (a) the silicon nitride liquid-cell and (b) the silicon liquid-cell. Reprinted with permission from American Chemical Society19. Please click here to view a larger version of this figure. 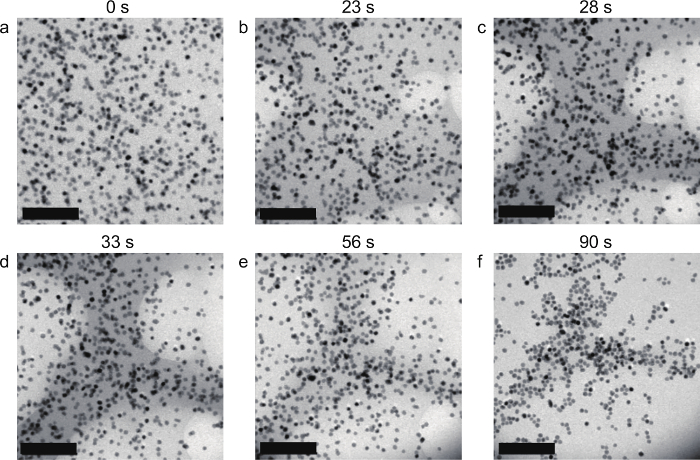 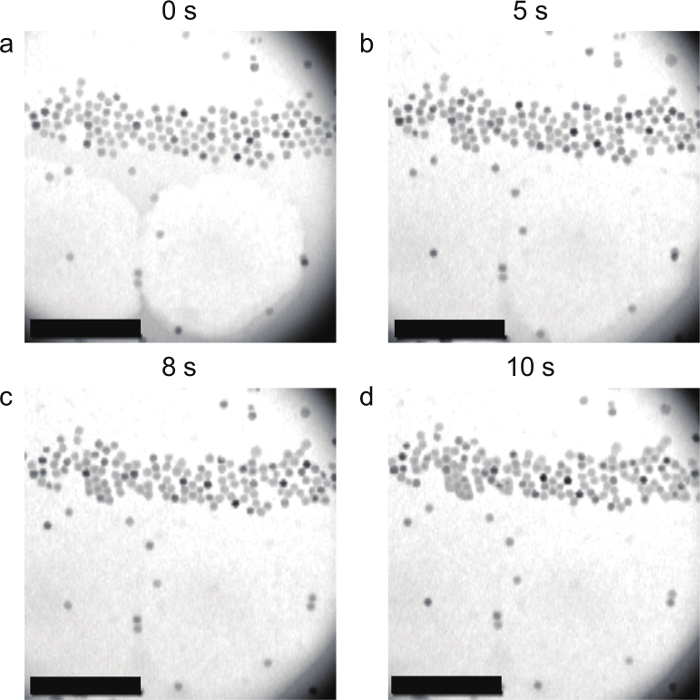 Figure 5: Snapshot images of the liquid-cell from a movie recorded by TEM of the solvent-drying-mediated self-assembly of lead selenide nanoparticles in a silicon nitride liquid-cell. The images were taken at (a) 0 s, (b) 5 s, (c) 8 s, and (d) 10 s. Scale bars = 200 nm. Please click here to view a larger version of this figure. 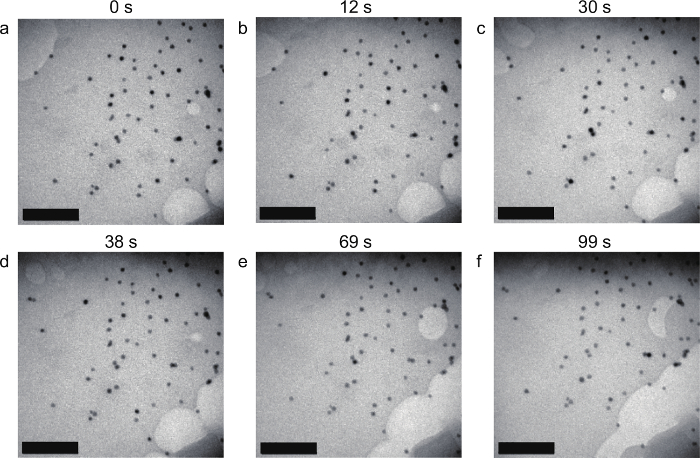 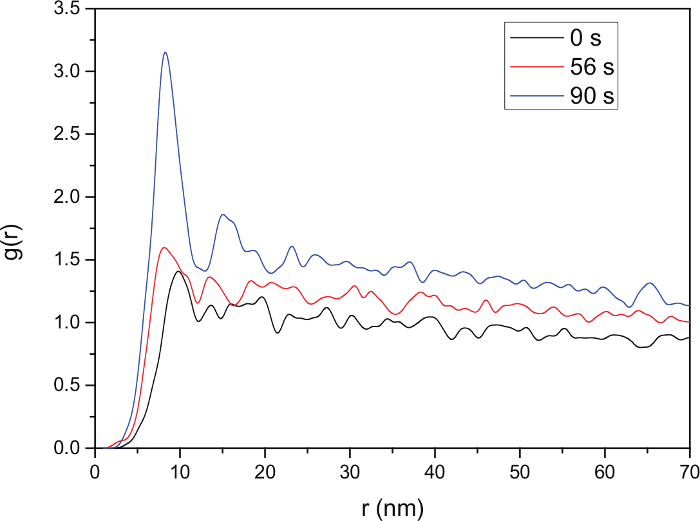 Platinum nanoparticles with a size of 7 nm were synthesized via the reduction of ammonium hexachloroplatinate (IV) and ammonium tetrachloroplatinate (II) using poly (vinylpyrrolidone) (PVP) as a ligand and ethylene glycol as a solvent and a reducing agent27. A ligand-exchange reaction with oleylamine was performed to disperse the particles in a hydrophobic solvent. Lead selenide nanoparticles were synthesized via the thermal decomposition of lead-oleate complexes using TOP-Se as a selenium source28 (Refer to reference29 for the detailed synthesis of chalcogenide nanocrystals). Since the as-synthesized lead selenide nanoparticles were already capped with long-chain ligands, the particles did not require a ligand-exchange process. Hydrophobic platinum and lead selenide nanoparticles were dispersed in a mixed solvent composed of o-dichlorobenzene, pentadecane, and oleylamine. O-dichlorobenzene, which has a relatively low boiling point (180.5 °C), presumably evaporates during solution loading, but pentadecane, which has a high boiling point (270 °C), remains after o-dichlorobenzene evaporation. A trace amount of oleylamine was added as an additional surfactant to prevent aggregation of the nanoparticles.

We fabricated liquid-cells that were compatible with conventional TEM holders using routine microfabrication techniques to obtain TEM images of nanoparticles in solution25. The masks used to fabricate the top and bottom chips are shown in Figure 1. The silicon nitride windows of the cell are very thin (25 nm) so careful handling during the process is required. There are a few situations that are likely to cause the fragile windows to break. Firstly, placing the liquid-cells window-side down on surfaces may cause the windows to break because of friction. Also, when the cells are taken out of the etching solution, the buoyancy of the solution may break the windows. In addition, the windows may break during the drying of the washing solution with an air flow, so the air should be blown horizontally with a weak intensity.

The platinum and lead selenide nanoparticle dispersions in the mixed solvent are loaded into a large rectangular-shaped reservoir of the liquid-cells. The solution flows into the center of the cells where the windows are located, because of capillary forces. Using an injector equipped with ultrathin capillary helps to load a small amount of dispersion into the cells effectively. The cells are sealed by covering them with copper aperture grids, to which vacuum grease has been applied. Care should also be taken not to break the cell windows during the assembly of the cells. If breakage of a cell window is found, the liquid-cell should never be inserted into a TEM chamber.

We observed nanoparticle motion in real-time using the liquid-cell TEM technique. The TEM images have relatively dark and bright areas because of the varying thickness of the solution (Figure 4). The dark areas, corresponding to relatively thick areas of the solution, shrunk continuously under irradiation by the electron beam. This change can be induced by solvent drying, bubble formation, or dewetting.30 Among them, the change in contrast shown in Figure 4 seems to be caused by solvent drying, rather than bubble formation or dewetting. When bubble formation occurs, bright areas of circular or elliptical shapes appear and dynamically merge, but this phenomenon is not seen in Figure 431. On the other hand, considering the hydrophobic silicon nitride surface and hydrophobicity of the solvent used, the dewetting effect is insignificant.

Figure 4 shows the self-assembly process of the platinum nanoparticles as the solvent of the particle dispersion evaporates. The solvent-drying-mediated self-assembly of nanoparticles is composed of several steps. First, the nanoparticles condense into amorphous agglomerates with several layers by the rapidly moving solvent. Secondly, these agglomerates flatten onto the substrate to form a monolayer. Finally, local solvent fluctuations result in an ordered structure of nanoparticles. We tracked particle positions at three different times (0 s, 56 s, and 90 s) and quantitatively analyzed the assembly by calculating the RDF at these times (Figure 7). At t = 0 s, the RDF shows only a small peak near 10 nm, indicating the particles are randomly distributed. As the solvent evaporates, nanoparticles move closer together, and the RDF peak shifts to a shorter distance. The RDF shows a strong peak near 8.3 nm at 90 s. Considering the size of the nanoparticles (7.3 nm) and the length of the ligands (~1 nm), the RDFs indicate that the particles are assembled at the closest distance possible upon solvent drying.

We thank Prof. A. Paul Alivisatos at the University of California, Berkeley and Prof. Taeghwan Hyeon at Seoul National University for the helpful discussion. This work was supported by IBS-R006-D1. W.C.L. gratefully acknowledges support from the research fund of Hanyang University (HY-2015-N). 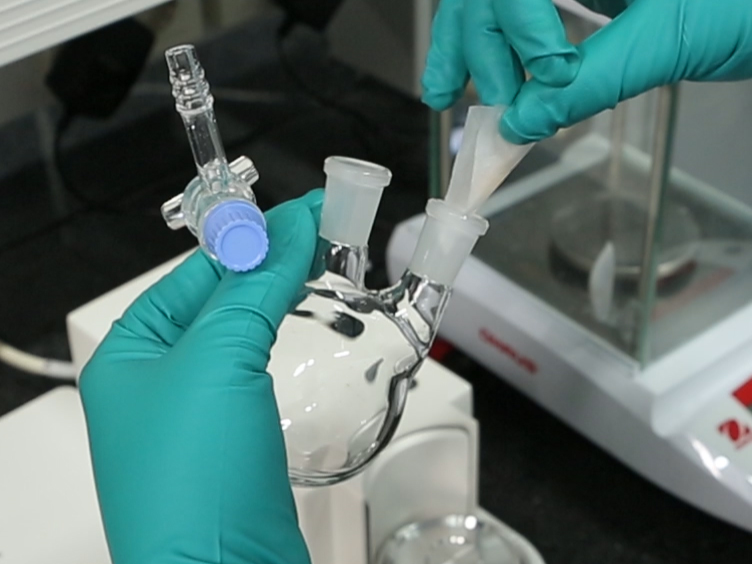