This protocol describes the various techniques necessary for transmission electron microscopy including negative staining, ultrathin sectioning for detailed structure, and immuno-gold labelling to determine the positions of specific proteins in exosomes.

Exosomes are nano-sized extracellular vesicles secreted by body fluids and are known to represent the characteristics of cells that secrete them. The contents and morphology of the secreted vesicles reflect cell behavior or physiological status, for example cell growth, migration, cleavage, and death. The exosomes' role may depend highly on size, and the size of exosomes varies from 30 to 300 nm. The most widely used method for exosome imaging is negative staining, while other results are based on Cryo-Transmission Electron Microscopy, Scanning Electron Microscopy, and Atomic Force Microscopy. The typical exosome's morphology assessed through negative staining is a cup-shape, but further details are not yet clear. An exosome well-characterized through structural study is necessary particular in medical and pharmaceutical fields. Therefore, function-dependent morphology should be verified by electron microscopy techniques such as labeling a specific protein in the detailed structure of exosome. To observe detailed structure, ultrathin sectioned images and negative stained images of exosomes were compared. In this protocol, we suggest transmission electron microscopy for the imaging of exosomes including negative staining, whole mount immuno-staining, block preparation, thin section, and immuno-gold labelling.

Extracellular vesicles (EVs) are lipid bilayer vesicles secreted by cells, and their size ranges between 30 and 300 nm. EVs were first reported in 1978, with evidence from vesicles of patients with Hodgkin's disease1. These vesicles were reported to be 40 to 120 nanometers in size. In 1980, it was reported that EVs are involved in the coagulation system and thrombosis, formation of a blood clot inside a blood vessel in cancer patients2. After 30 years, EVs have been reported to be an important factor to promote tumor invasion, immune escape, and angiogenesis3. In addition, the functions of EVs have been studied as regulators in cellular interactions in the areas of inflammation, immune disorder, neurological disease, and cancer4. Since EVs contain specific biomolecules such as protein, mRNA, and microRNA5, their potential application in diagnostics and therapeutics has been analyzed6,7. EVs are a category composed of subgroups including exosomes, prostasomes, oncosomes, dexosomes, microparticles, promininosomes, argosomes, and exosome-like vesicles, depending on their cellular origin and biological function3. In addition, based on their biogenesis, these EVs can be divided into microvesicles (shed microvesicles, 100 - 1000 nm) and exosomes (30 - 300 nm)8,9. Among these, the exosome has been reported as a cell communicator for immune response10, cancer11,12, and infectious disease13.

Interest in the exosomes as a biomarker for early diagnosis is increasing rapidly, and the purification and characterization of exosomes must be accompanied with molecular imaging techniques. The varying sizes and morphologies of exosomes, depending on their origin and function14, can be distinguished by microscopy techniques with high resolution, such as electron microscopy. Most exosomes were visualized by negative stained Transmission Electron Microscopy (TEM)15,16,17, and these results were confirmed by immunolabeling of a specific protein in whole mount vesicle18. Several research groups have reported the structure through Scanning Electron Microscopy, Atomic Force Microscopy19,20, and Cryo-TEM21,22. However, while these techniques are useful for studying the exosome structure, they are insufficient for observing the position of specific proteins located inside the exosome. Therefore, we introduced a protocol for imaging exosomes with a specific protein's labelling. We applied block preparation, ultrathin sectioning, and immunostaining for ascertaining the protein's detailed location in the exosome. This was compared with negative staining and whole mount immunostaining, which is traditionally used for characterization of the exosome.

1. Block Preparation, Sectioning, Staining and Imaging of the Exosome

2. Immuno-staining of Sections and Imaging (Figure 1)

Figure 1: Process of sample preparation and immunostaining. (A) Double fixed exosome is dehydrated and infiltrated with low viscosity embedding mixture resin. (B) Resin embedding. (C) Ultra-thin section with diamond knife. (D) Setup for Immuno-gold labelling. The grids with the ultrathin sections are put on the liquid droplets on a parafilm, which is placed with the wet paper towel. Each section is incubated with droplets of 50 - 100 µL antibody, then washed with buffer. (E) Double staining with uranyl acetate and lead citrate. The lid is covered with aluminum foil for heavy metal staining. (F) Staining solution is removed by filter paper. Please click here to view a larger version of this figure.

Currently, exosomes are classified into size and shape categories by transmission electron microscopy. Figure 2 shows negative stained exosome and immune-labelled exosome in whole mount status. Figure 3 shows sectioned exosome and immuno-labelled exosomes after thin sectioning. Immuno-gold staining using antibodies of specific proteins is used to positively identify an exosome and classify the types of proteins in the exosome. The protocol in this paper uses whole mount immunostaining and immunostaining with plastic sectioned exosome. 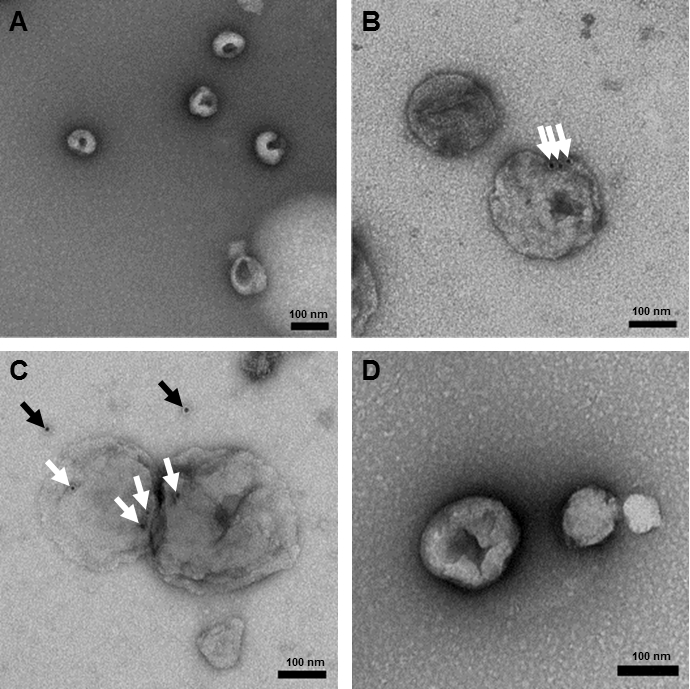 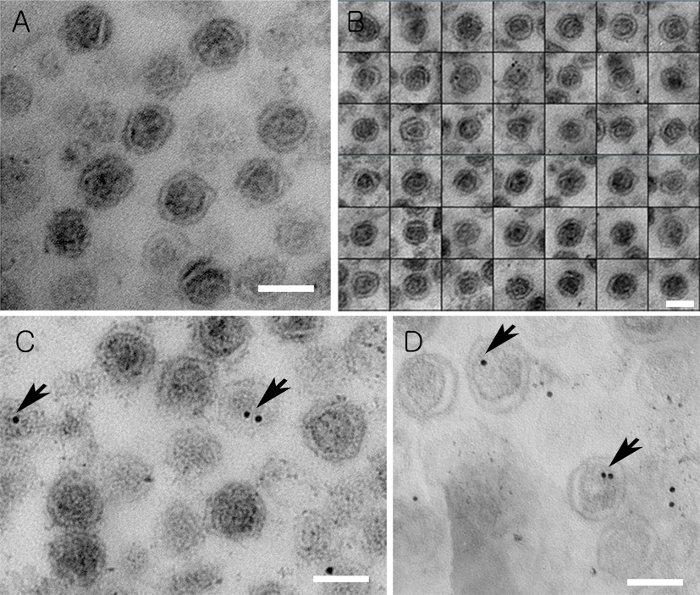 This article presents a protocol for observing the detailed exosome's structure and labeling of its specific proteins. Negative staining has been considered as the best method for exosome imaging17. This conventional technique has shown exosomes' cup-shaped structure. However, this cup shape is a form of artefact that can occur due to the drying process. Cryo-TEM results have shown that exosomes have a perfectly spherical structure in aqueous solution25,26. The cryo-TEM technique is a very powerful method for examining the natural structure, but it is difficult to apply the immuno-gold method. Raso and co-workers pointed out drying in the conventional method (whole mount-negative staining method) resulted in a cup-shaped morphology. In this study, the standard method for cell preparation (routine EM; fixation, dehydration, embedding, and sectioning) was applied to reduce the exosome drying effect. The routine EM using plastic embedding can avoid or reduce artefacts (changes in volume and shape) caused by denaturation. For chemical fixation, glutaraldehyde (GA) was used for the cross-linking (covalent interactions between amino groups). Usually, osmium tetroxide (OsO4) is used for fixation of lipids as well as improved contrast.

In this study, negative staining helped to confirm the typical morphology of exosomes that has been reported in previous papers21,27,28,29. In addition to negative staining, block sectioning is also a good method for observation of exosomes (Figure 2). While sectioned images showed the inner structure of exosome, in contrast negative stained TEM showed mainly the surface of the exosome. In sectioned images (Figure 3), the vesicles showed the lumen structure that is known as a structural feature of exosomes30. In this protocol, we used block sectioning, immuno-staining, and TEM imaging. Specially, the block sectioning is useful for analysis at a later time when images may be required at different magnifications, for different microscopy technique, and for other analyses such as immuno-gold labelling. After sectioning, sections on the grid can be stored in the grid box, which can be used for immuno-staining for classification of exosomes. For example, we detected the known exosome markers14 in the isolated exosomes to study the functions of exosomes.

This research was supported by the Bio & Medical Technology Development Program of the National Research Foundation (NRF) & funded by the Korean government (MSIP&MOHW) (No. 2016M3A9B6904244). We also thank members of the Medicinal Bioconvergence Research Center for purification of exosome. 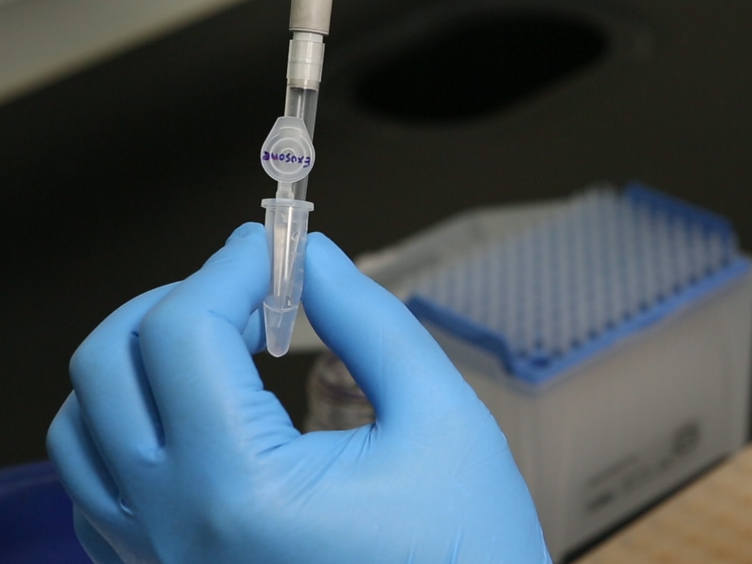