Two-dimensional gel electrophoresis (2DGE) is a technique that can resolve thousands of biomolecules from a mixture. This technique involves two distinct separation methods that have been coupled together: isoelectric focusing (IEF) and sodium dodecyl sulfate polyacrylamide gel electrophoresis (SDS-PAGE). This physically separates compounds across two axes of a gel by their isoelectric points (an electrochemical property) and their molecular weights.

The procedure in this video covers the main concepts of 2DGE and a general procedure for characterizing the composition of a complex protein solution. Three examples of this technique are shown in the applications section, including biomarker detection for disease initiation and progress, monitoring treatment in patients, and the study of proteins following posttranslational modification (PTM).

2D gel electrophoresis begins with IEF as the first dimension. Every protein has a pH value, called the isoelectric point or pI, where the net charge is zero. When a protein is subjected to an electric field, it will move toward the electrode with opposite charge. Samples of interest are loaded onto immobilized pH gradient, or IPG, strips which have embedded ampholytes, molecules containing both acidic and basic groups. An electric field is then applied to the pH gradient strip, causing the proteins to migrate until they reach the pH value matching their pI, where they lose their net charge.

Prior to running the second-dimension, the embedded proteins are treated with SDS, denaturing them and providing a uniform negative charge. Once completed, the IPG strips are placed onto a polyacrylamide gel. An applied electric field draws the proteins toward the anode, with larger proteins moving more slowly through the gel.

Once the protein mixture has been separated according to pI and molecular weight, the proteome map is visualized using stains, and proteins of interest are identified.

Now that we have discussed the principles of 2D gel electrophoresis, let's go over a typical laboratory procedure.

Before the experiment can be performed, the proteins must be solubilized into media. Solubilization of the sample is achieved by de-aggregating proteins with a combination of chaotropic agents for disrupting hydrogen-bonding interactions, nonionic detergents to prevent altering of the proteins' charge, reducing agents to break disulfide bonds, and buffers. To remove interfering abundant proteins and other molecules, the material is sequentially extracted by centrifugation, and collection of the resulting pellet; followed by treatment with endonuclease, an enzyme used to consume any DNA that would interfere with the experiment.

Once the proteins have been solubilized, IPG strips are prepared by rinsing with a strip-cleaning solution and left upside-down to dry. Each strip is then assigned a strip holder number. Once ready, the cellular extract is loaded onto the strips in a slow, sliding motion from the negative to the positive end. For the purpose of rehydration, damp blotting paper is placed on top of the electrode and under the gel strips; the IPG strips are then lined onto the IEF instrument. A high electric current is applied, and the proteins begin to migrate.

Following completion of the first dimension, the gel for SDS-PAGE is prepared in a casting apparatus. The IPG strips are treated by placing them face down in SDS-containing equilibration buffer. The electrophoresis unit is readied with the addition of electrophoresis buffer. The treated IPG strips are collected using tweezers, placed on top of the gel plates, and sealed with agarose-sealing solution. A voltage source then applies an electric field, which is held until the fastest-moving proteins are 1 cm from the bottom of the gel.

After completion of the electrophoresis, the proteins must be visualized. Traditionally this is performed by staining with Coomassie blue or silver nitrate. Proteins of interest may be transferred from the gel, and analyzed by Western blot analysis.

A second identification approach involves excision of the proteins from the gel, digesting them, than analyzing them by mass spectrometry.

Now that we've reviewed a procedure, let's look at some of the uses for 2D gel electrophoresis.

One of the most common uses for this technique is the identification of molecules involved in disease initiation and progression. 2D gel electrophoresis, coupled with mass spectrometry, can detect the up- or down-regulation of specific proteins in diseased areas in comparison to healthy ones.

Additionally, 2D gel electrophoresis is useful in following the progress of patients' response to a potential therapeutic drug. Specimens may be taken from patients at various timepoints following administration of the treatment. In this way, 2D gel electrophoresis coupled with Western blot or mass spectrometry analysis, can detect proteins associated with negative responses such as inflammation; or the absence of proteins in an alleviated state.

Another use for 2D gel electrophoresis is in the study of protein structure and function following posttranslational modification, or PTM, which are additions to proteins following their translation from mRNA. PTM's can regulate a variety of functions, including protein signaling, gene expression, or cause oxidative damage. 2D gel electrophoresis is sensitive to modifications such as methylation or acetylation, which can cause a shift in pI as well as the molecular weight.

You've just watched JoVE's video on 2D gel electrophoresis. This video described the principles of the technique, a typical experimental procedure, and several of its applications in the field of biomedicine. 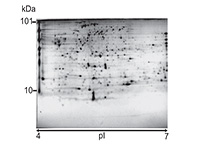