We describe an original transfer RNA analysis platform named SPOt (Streamlined Platform for Observing tRNA). SPOt simultaneously measures cellular levels of all tRNAs in biological samples, in only three steps, and in less than 24 hours.

Transfer RNAs (tRNA) are abundant short non-coding RNA species that are typically 76 to 90 nucleotides in length. tRNAs are directly responsible for protein synthesis by translating codons in mRNA into amino acid sequences. tRNAs were long considered as house-keeping molecules that lacked regulatory functions. However, a growing body of evidence indicates that cellular tRNA levels fluctuate in correspondence to varying conditions such as cell type, environment, and stress. The fluctuation of tRNA expression directly influences gene translation, favoring or repressing the expression of particular proteins. Ultimately comprehending the dynamic of protein synthesis requires the development of methods able to deliver high-quality tRNA profiles. The method that we present here is named SPOt, which stands for Streamlined Platform for Observing tRNA. SPOt consists of three steps starting with metabolic labeling of cell cultures with radioactive orthophosphate, followed by guanidinium thiocyanate-phenol-chloroform extraction of radioactive total RNAs and finally hybridization on in-house printed macroarrays. tRNA levels are estimated by quantifying the radioactivity intensities at each probe spot. In the protocol presented here we profile tRNAs in Mycobacterium smegmatis mc2155, a nonpathogenic bacterium often used as a model organism to study tuberculosis.

Cellular tRNA levels fluctuate according to conditions such as cell type, environment, and stress1,2,3. SPOt, Streamlined Platform for Observing tRNA, is an original, reliable, and straightforward technique that allows fast and precise quantification of transfer RNA levels in laboratory-grown organisms.

SPOt is a simple and original combination of two standard and straightforward approaches: (1) RNA body labeling, which consists in the synthesis, in growing organisms, of radioactive total RNAs and (2) tRNA macroarrays, a systematic and miniaturized genomic tool optimized for tRNA segregation.

Samples are streamlined from living organisms to the quantification platform. They are directly analyzed after extraction and not processed any further which significantly limits biases compared to techniques requiring post-extraction amplification or enzymatic treatments. SPOt is versatile and can be easily combined to polysome fractionation to identify and quantify tRNA subpopulations that are physically associated with translating ribosomes.

The protocol presented here is optimized for Mycobacterium smegmatis, and it was also successfully used to profile tRNAs in Escherichia coli9, Saccharomyces cerevisiae10, mouse, and human cell cultures11.

NOTE: tRNA microarrays are manually printed with forty two 70-mer DNA oligonucleotides complementary to the 3' end of each M. smegmatis tRNA (terminal CCA excluded) using an eight-pin arrayer. The sequences of the DNA oligonucleotide probes as well as the probe layout in the well-plate and the array are provided (Supplementary File 1- sheet 1 to 3 respectively).

Three independent biological replicates show that, under the tested growth conditions, all M. smegmatis tRNAs are expressed above background level (Figure 1). In this particular experiment, the observed standard deviation for each probe is comprised between 2% (Arg (TCT)) and 22% (Cys (GCA)) with a median at 5% (Figure 1). False changes between replicates are significantly influenced by factors such as array preparation and hybridization. High reproducibility is achieved through careful and consistent array printing as well as automated sample hybridization. There is a 5-fold difference between tRNA Ile (GAT) and tRNA (Val (TAC), the highest and lowest abundant species respectively. SPOt shows that the expression of tRNA isoacceptors is not uniform. Isoacceptors are species that hold the same amino acid but display different anticodon sequences and therefore decode different codons on mRNAs. For example, all Alanine isoacceptors are expressed at similar levels, whereas the highest and lowest Arginine accepting tRNAs differ by 3-fold. 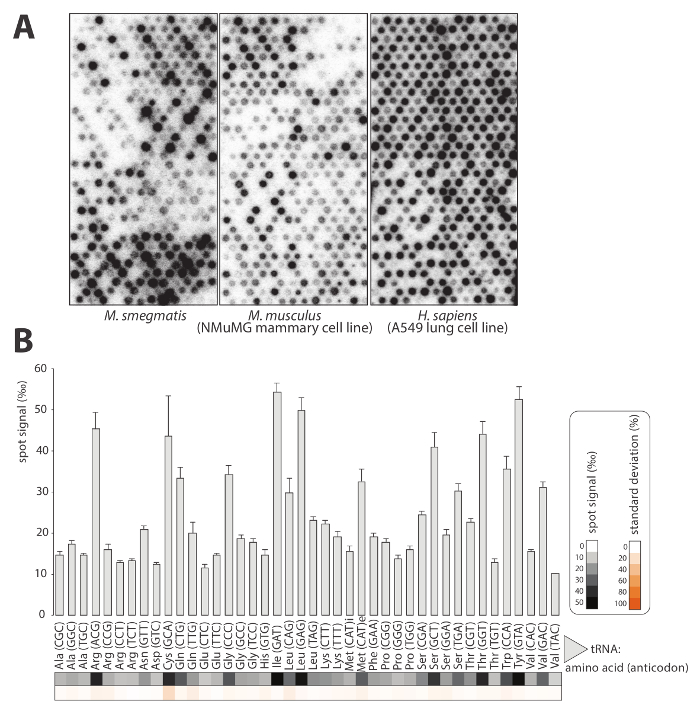 Figure 1: Representative tRNA macroarray results. (A) Scanned bacterial, mouse and Human macroarrays. M. smegmatis arrays use only 43 probes instead of 48 for mouse and Human. As a consequence, the bacterial array displays 40 empty spots (probes are replicated eight times on each array) that blend with the background. Most of them are clustered in the upper left corner. (B) Histogram and heatmap representations of tRNA profiles in M. smegmatis under optimal growth conditions. Probe signals are the average of three independent experiments (including bacterial growth, metabolic labeling, extraction and array hybridization) and are expressed as per thousand values of total tRNAs. Standard deviations for the three replicates are indicated as error bars and shades of orange on the histogram and heatmap respectively. Please click here to view a larger version of this figure.

Beta particle emissions are known bacteriostatic and bactericidal agents14, however radiations in the tested range have no significant impact on cell fitness. Scintillation counting showed that the radioactivity is incorporated into 25% of total-cell extracts and subsequently, 1% of purified total RNAs.

The probes' identical sizes, comparable melting temperature and GC content, along with a uniform protocol for macroarray spotting, hybridization and quantification allows for unbiased measurement of tRNA levels directly from spot signals.

SPOt is reproducible and specific. Its large dynamic range and easily adjustable threshold allows profiling low abundant species, such as tRNAs associated with polysomes, simply by prolonging array exposure times9. After the initial investment for the necessary equipment, the running cost per sample, including consumables, averages $15 per samples.

SPOt is applicable to any organism whose genome is available for probe design. Model organisms that are grown in vitro are ideal candidates for metabolic labeling. As mammalian genomes often encode many isodecoders (tRNAs that share identical anticodons but display small differences in their body sequences) probes need to be partially degenerated to preserve homogenous hybridization of close tRNA species. Finally, adherent mammalian cells yield typically lower amounts of total RNA compared to organisms grown in suspension such as M. smegmatis, so cultures need to be substantially scaled up. 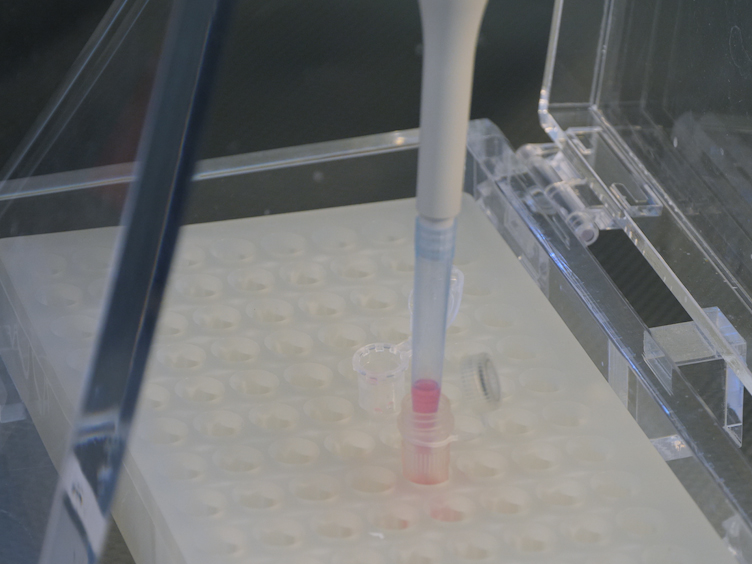