Sectioning via paraffin embedding is a broadly established technique in eukaryotic systems. Here we provide a method for the fixation, embedding, and sectioning of intact microbial colony biofilms using perfused paraffin wax. To adapt this method for use on colony biofilms, we developed techniques for maintaining each sample on its growth substrate and laminating it with an agar overlayer, and added lysine to the fixative solution. These optimizations improve sample retention and preservation of micromorphological features. Samples prepared in this manner are amenable to thin sectioning and imaging by light, fluorescence, and transmission electron microscopy. We have applied this technique to colony biofilms of Pseudomonas aeruginosa, Pseudomonas synxantha, Bacillus subtilis, and Vibrio cholerae. The high level of detail visible in samples generated by this method, combined with reporter strain engineering or the use of specific dyes, can provide exciting insights into the physiology and development of microbial communities.

Most microbes have the capacity to form biofilms, communities of cells held together by self-produced matrices. Biofilms can be grown in many types of physical setups, with various regimes of nutrient and substrate provision. Specific assays for biofilm formation tend to yield reproducible multicellular structures, and common architectures are observed for phylogenetically diverse species at the community or macroscopic level. When microbes are grown as colonies on solid medium under an atmosphere, macroscopic morphology conveys information about the capacity for matrix production and often correlates with other traits 1,2,3. The internal architecture of microbial colonies can also provide clues regarding biofilm-specific chemistry and physiology, but has been difficult to characterize. Recent applications of cryoembedding and cryosectioning techniques to bacterial colonies have enabled imaging and visualization of specific features at unprecedented resolution 4,5,6. However, studies with animal tissue have shown that paraffin embedding provides superior preservation of morphology when compared to cryoembedding 7 and has been used to visualize bacteria in tissues 8,9. We have therefore developed a protocol for fixation, paraffin embedding, and thin sectioning of microbial colony biofilms. Here, we will describe the preparation of Pseudomonas aeruginosa PA14 colony-biofilm thin sections 10,11, but we have also successfully applied this technique to biofilms formed by the bacteria Pseudomonas synxantha, Bacillus subtilis, and Vibrio cholerae12.

The process of paraffin-embedding and thin-sectioning biofilms follows a simple logic. First, the biofilms are encased in a layer of agar to preserve morphology during processing. Second, the encased-biofilms are submerged in a fixative to crosslink macromolecules and preserve micromorphology. These are then dehydrated with alcohol, cleared with a more non-polar solvent, and then infiltrated with liquid paraffin wax. Once infiltrated, the samples are embedded into wax blocks for sectioning. Sections are cut, mounted on slides, and then rehydrated in order to return them to a more native state. From this point, they can be stained or covered in mounting medium for microscopic analysis.

This protocol produces thin sections of microbial biofilms suitable for histological analysis. Colony biofilm substructures are visible when thin sections prepared using this method are imaged by light microscopy. Biofilms can also be grown on media containing fluorescent stains specific for individual features or stained at the rehydration step, immediately prior to mounting (steps 9.5-9.6). Finally, microbes can be engineered to produce fluorescent proteins in a constitutive or regulated fashion allowing in situ reporting of cell distribution or gene expression within these communities. We have used these methods to determine colony biofilm depth, cell distribution, matrix distribution, growth patterns, and spatiotemporal gene expression.

2. Preparation of the Fixative Solution

3. Direct Application of Fixative to the Colony Biofilm [Optional]

NOTE: We have found that biofilm morphology is best preserved when the agar overlay is added before fixation. However, this step also constitutes a change in environmental conditions that could affect gene expression. Fluorescent reporter expression patterns should therefore be verified using a separate protocol in which the fixation step is carried out before the addition of the agar overlay, as described here.

This method generates biofilm thin-sections wherein distinct morphological features and zones of gene expression can be imaged by DIC, fluorescence microscopy, and TEM. While DIC imaging using a 40X oil immersion objective can be sufficient to show some morphological features (Figure 2E), we have found that fluorescence microscopy of strains engineered to constitutively express fluorescent protein provides enhanced visualization of cell distribution within the sample (Figure 2D). Images of individual sections can be stitched together to generate a cross-section of the entire colony (Figure 2B) and to provide context for the localization of structural features within the overall morphology at the macroscopic level (compare Figure 2A, B, and C). Morphological features and fluorescent signals can be measured using imaging software14. Structures within the biofilm or transitions between zones of gene expression can then be correlated with distributions of metabolites or chemical gradients11 .

This protocol can be amended and adapted in several ways. Use of a strain engineered to express fluorescent protein under the control of a specific promoter enables visualization of the distribution of gene expression (Figure 3A). Colonies can be grown on medium containing dyes, or dyes can be added post-sectioning, to stain specific polysaccharides (Figures 3B and C). Finally, samples prepared in a modified version of this protocol can be examined by TEM (Figure 3D) to allow for visualization at higher resolution than that enabled by DIC or fluorescence microscopy.

Figure 1: Schematic depicting setup for colony growth prior to fixation.
(A) Colonies are grown on top of two layers of agar-solidified growth medium (top and bottom) and (B) are then overlaid with an additional layer (overlay), which preserves colony morphology. (C) The colony sandwiched between the overlay and top layer is then separated from the bottom layer for further processing. Please click here to view a larger version of this figure. 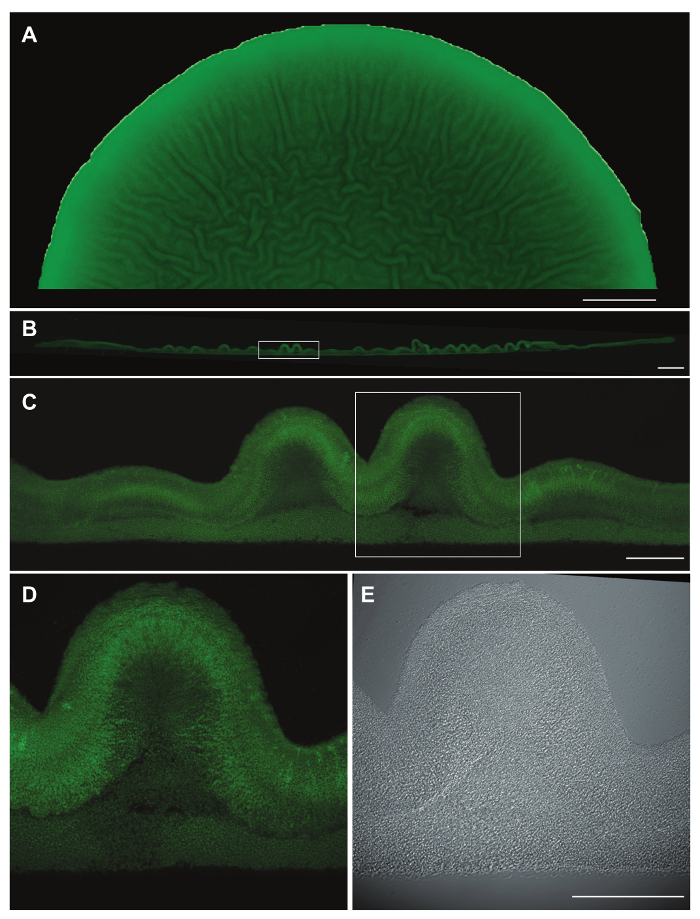 Figure 2: Micromorphological features and YFP fluorescence in cross-sections of paraffin-embedded colonies.
Representative data for a Pseudomonas aeruginosa PA14 Δphz colony15 constitutively expressing YFP and grown for 3 days on 1% tryptone, 1% agar containing Congo red and Coomassie blue. (A) Top-view, fluorescence image showing half of a colony prior to fixation. (B) Cross section of the entire colony after paraffin-embedding. The boxed area was imaged with a 10X objective lens (C). The boxed area in (C) was then imaged with a 40X oil immersion objective lens using fluorescence (D) and DIC (E). Scale bars represent 2 mm (A), 500 µm (B), and 100 µm (C-E). Please click here to view a larger version of this figure. 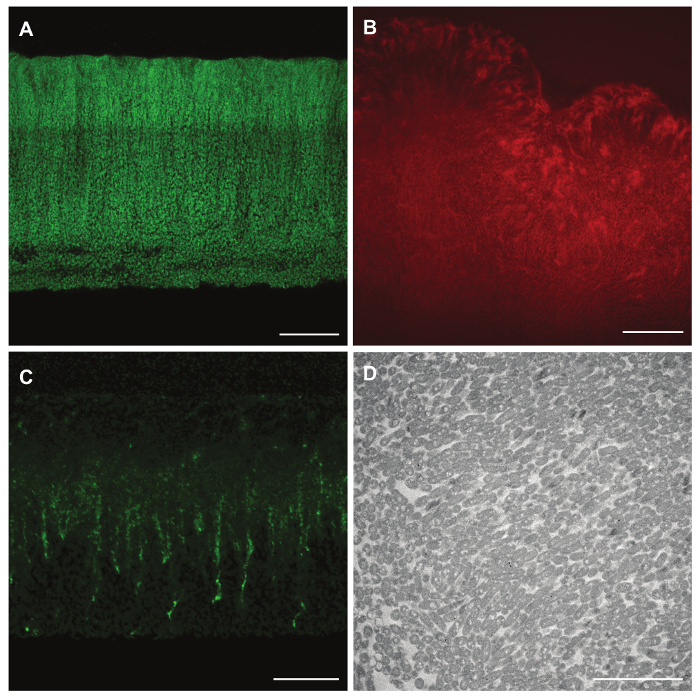 *This sample was processed for sectioning via paraffin-embedding through Step 4 of the above protocol, omitting Steps 4.1-4.3, and then processed separately for TEM analysis.

Paraffin-embedding and thin-sectioning tissue samples is a classic histological technique that enables imaging of micro-morphological structures and is commonly used on eukaryotic tissues, and has been applied with some success to microbial samples8,9. While cryoembedding allows for strong retention of endogenous and immunofluorescent signal, paraffin embedding is generally preferable as it provides better preservation of morphology16. In adapting this method for application to microbial biofilms, we focused on characteristics that are unique to our system. The cells and matrix of tissues are often held together relatively robustly, while biofilms tend to be more delicate; we therefore optimized routine fixation and wax embedding protocols to maximize sample retention. Maintaining the sample on its growth substrate and overlaying the colony with agar immediately prior to fixation ensures that the sample is not lost from the top or the base. However, overlaying colonies with agar that is too hot can damage the colonies, so extra care should be taken during this step.

Fixation is a critical step for retaining structure through the harsh dehydration, clearing, and infiltration steps required for paraffin embedding. We found that lysine-formaldehyde fixation best preserves the integrity of the sample. Soluble lysine, a diamine, can react with aldehydes to form cross-linked polymers and has been proposed to reinforce exopolymeric substance (EPS) against mechanical degradation17,18.

We have observed that background fluorescence decreases with successive washes in the orange oil-based clearing agent, or through prolonged exposure, during sample rehydration (step 9.3). Over-treatment with the clearing agent can, however, result in brittle samples that are difficult to section19. It may be necessary to adjust the volume or number of washes to reflect the amount of wax present during each rehydration. Increased background fluorescence can likewise arise from contamination of the tissue processing reagents, where the wax, which is slightly autofluorescent, is either fully or partially miscible in the clearing solvent or ethanol used in these steps (Steps 6.1-6.4). Additionally, we have found that ethanol diminishes reporter signal, and it is critical to re-constitute the fluorophore in two washes of PBS prior to mounting (step 9.5-9.6).

This method also allows for the localization of constitutive and promoter-driven fluorescence at the resolution of cells. However, we advise caution when using this method to interpret gene expression. The overlay step introduced in this protocol (Step 4.2), applied prior to fixation at 50 ˚C, presents a considerable environmental change relative to the initial growth conditions that may influence gene expression patterns. It may be useful to verify expression patterns by applying fixative to the colony directly, immediately prior to pouring the overlay, but at a cost to morphology (Optional Step 3.1-3.3).

Another factor influencing the interpretation of fluorescence is the topography of the section itself. Different regions of the biofilm may exhibit varying degrees of structural integrity and be more or less amenable to preservation via fixation, depending upon which, if any, functional groups those components are able to contribute to fixative cross-linking 20. As a result, sections may lose biomass disproportionately from the section surface when transitioning from one morphological or metabolic zone to another along the colony's z-axis. This may be addressed by imaging an intact focal slice of the section with a confocal microscope.

In addition to applying this technique to strains engineered to express fluorescent proteins, we have examined micromorphological features by transmission electron microscopy (TEM) and in biofilm samples stained with specific fluorescent dyes (Figure 3A). Jennings et al. recently described a dye specific for Pel, the major polysaccharide produced by P. aeruginosa PA14 biofilms 21. As described in the protocol and representative results above, application of this dye to sections allows for visualization of Pel distribution in PA14 colony biofilms at high resolution (Figure 3C) 3. Conversely, fluorescent dyes such as Congo red may be added to the growth medium and imaged post-sectioning (Figure 3B). The application of an overlay also preserves colony biofilm morphology and cell structure throughout processing for TEM (Figure 3D).

The optimized method described here enables the preparation of colony biofilms for sectioning via paraffin embedding, wherein endogenous signal and features or complexed dyes may be localized in vivo with superior resolution while minimizing sample loss and preserving native colony macro- and micro-morphologies. We acknowledge that substantial effort, time and reagent use are required for this method. However, we feel these drawbacks are countered by the degree of morphological preservation, the resolution of in situ fluorescence, and the amenability to pre- and post-staining procedures or alternative processing strategies (such as preparation for TEM) afforded by this technique. 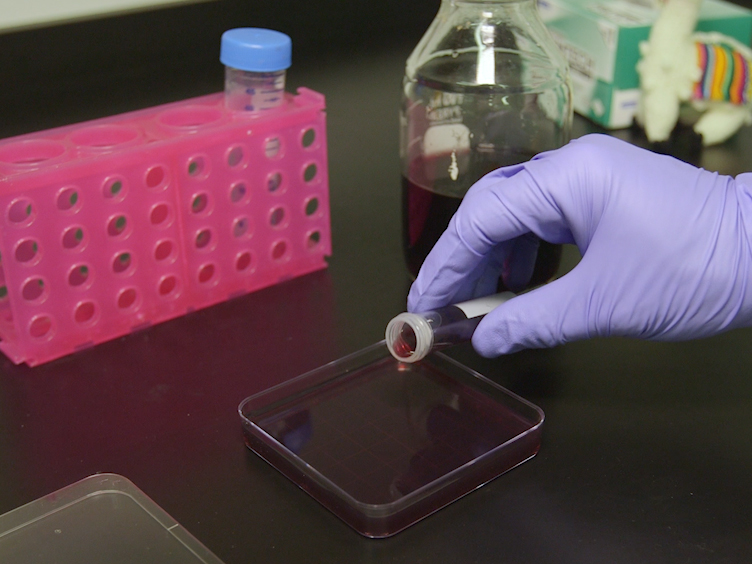