Acute myocardial infarction can lead to acute heart failure and cardiogenic shock. The evaluation of hemodynamics is critical for the evaluation of any potential therapeutic approach directed against acute left ventricular (LV) dysfunction. Current imaging modalities (e.g., echocardiography and magnetic resonance imaging) have several limitations since data on LV pressure cannot directly be measured. LV catheterization in mice undergoing coronary artery occlusion could serve as a novel method for a real-time evaluation of LV function.

At the beginning of the procedure, mice were anesthetized followed by endotracheal intubation. For LV catheterization, the right carotid artery was exposed via middle-neck incision. The catheter was introduced and placed into the LV cavity. Left thoracotomy was conducted and the left main coronary artery (LCA) was ligated. To induce reperfusion, the suture was released after 45 min. Pressure-volume data was recorded at all times.

Ligation of the LCA caused a decrease in LV systolic function as evidenced by a 30% reduction in stroke volume, LV ejection fraction (EF), and cardiac output. Maximum dP/dt as a parameter for LV contractility was also significantly reduced and diastolic function was severely impaired (minimum dP/dt -40%). Reperfusion over a period of 20 min did not lead to a complete recovery of LV function.

Real-time pressure-volume analysis served as a valid procedure for monitoring cardiac function during acute myocardial infarction in mice. Maintaining stable anesthesia and a standardized surgical approach was crucial to ensure valid results. As the early phase of acute myocardial infarction is critical for morbidity and mortality, the delineated method could be beneficial for preclinical evaluation of new strategies for cardioprotection.

Cardiovascular disease is the most common cause of death in western civilization1. Acute myocardial infarction is a critical event, which is associated with high acute and chronic mortality2. Even if revascularization is achieved via emergency percutaneous coronary intervention (PCI), mortality remains high, particularly within the first 48 h after onset of symptoms in patients with acute myocardial infarction3. Cardiogenic shock caused by acute reduction in left ventricular (LV) function is a major cause for in-hospital mortality in these patients3. This early reduction in LV function is caused by myocardial damage following ischemia and reperfusion. This so-called ischemia/reperfusion (I/R) injury is mediated by changes in cellular metabolome such as exaggerated generation of reactive oxygen species4,5.

To explore possible protective mechanisms leading to a decrease in myocardial damage in a preclinical setting, reliable mouse models are essential including methods for evaluation of post-I/R LV function6. In this setting, transthoracic echocardiography7 and magnetic resonance imaging (MRI)6 are widely used for functional phenotyping8,9. However, these methods are not suitable for the assessment of severe LV dysfunction and cardiogenic shock in an ongoing acute myocardial infarction and cannot directly show data on LV pressure. The Langendorff apparatus using isolated heart in an ex vivo assay provides information about the underlying pathomechanisms of early-phase I/R injury10. This method is limited due to its inability to reproduce in vivo adaptive mechanisms such as regulation of the autonomous nervous system or hormonal regulation and acid-base homeostasis. There is currently no method available for a complete functional phenotyping of cardiogenic shock and left ventricular dysfunction during an ongoing myocardial I/R injury.

A synchronized approach with combination of pressure-volume (PV) catheterization and transient surgical left main coronary artery (LCA) occlusion could be beneficial but technically challenging. Stable extracardiac hemodynamics during I/R injury are essential for valid results since unstable anesthesia or blood loss could heavily influence the results. A novel approach for hemodynamic phenotyping of I/R injury via LV PV catheterization and transient LCA occlusion could bring new insights on cardiogenic shock and LV dysfunction in acute myocardial infarction and serve as a method for future analysis on cardioprotection.

All experiments were completed in accordance and compliance with all relevant regulations (‘European Convention for the Protection of Vertebrate Animals used for Experimental and other Scientific Purposes’ (Directive 2010/63/EU) and animal care was in accordance with institutional guidelines. All experiments have been performed with male C57BL/6JRj mice at the age of 6 months.

NOTE: The calibration of the PV catheter system consists of 4 mandatory steps, two of which have to be performed after the measurement. Calibration should be repeated after every experiment to ensure valid results.

After LV catheterization, reversible LCA ligation was performed for 45 min followed by 10 min of reperfusion. PV data was recorded at all times (Figure 1).

Correct placement of the PV catheter was confirmed by obtaining the characteristic LV PV graph (Figure 2A). LV catheter placement showed the typical ventricular pressure range with a minimum of 0 - 20 mmHg whereas false placement of the PV-catheter in the aorta would have shown a typical arterial pressure curve with a minimum pressure of 30 - 60 mmHg (diastolic blood pressure) and a small excursion at the end of systole indicating the aortic valve closing (Figure 3B and 3C). Successful occlusion of the LCA was visually confirmed by blanching of the distal LV myocardium (Figure 2B).

After LCA occlusion, PV data was acquired in 5 min intervals. Pressure data analysis demonstrated no changes in maximum LV systolic pressure indicating preserved peripheral perfusion and stable anesthesia (Figure 4A). Analysis of LV volume revealed a significant decrease in both EF (52% vs. 40%, p = 0.008) and absolute stroke volume (Figure 4B and 4C). These changes happened within the early phase of ischemia and LV functional data remained unchanged in the later phase of ischemia. Maximum dP/dt as a parameter of LV contractility showed a 30% reduction in mice undergoing myocardial ischemia. Stroke work was 30% reduced (Figure 4D and 4E). As a parameter for diastolic function, minimum dP/dt was significantly decreased indicating impaired LV compliance (Figure 4F). Reperfusion by extraction of the silicon tube was visually validated. Reperfusion did not show significant changes in PV data analysis within a period of 20 min (Figure 4A-4D). Sham-operated animals did not show a significant reduction in LV systolic or diastolic parameters (Figure 4I-4J). 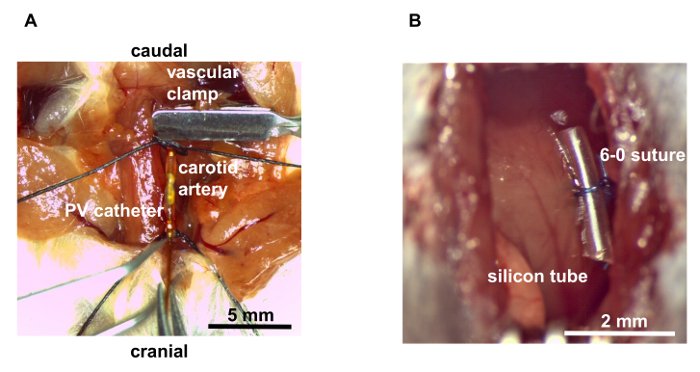 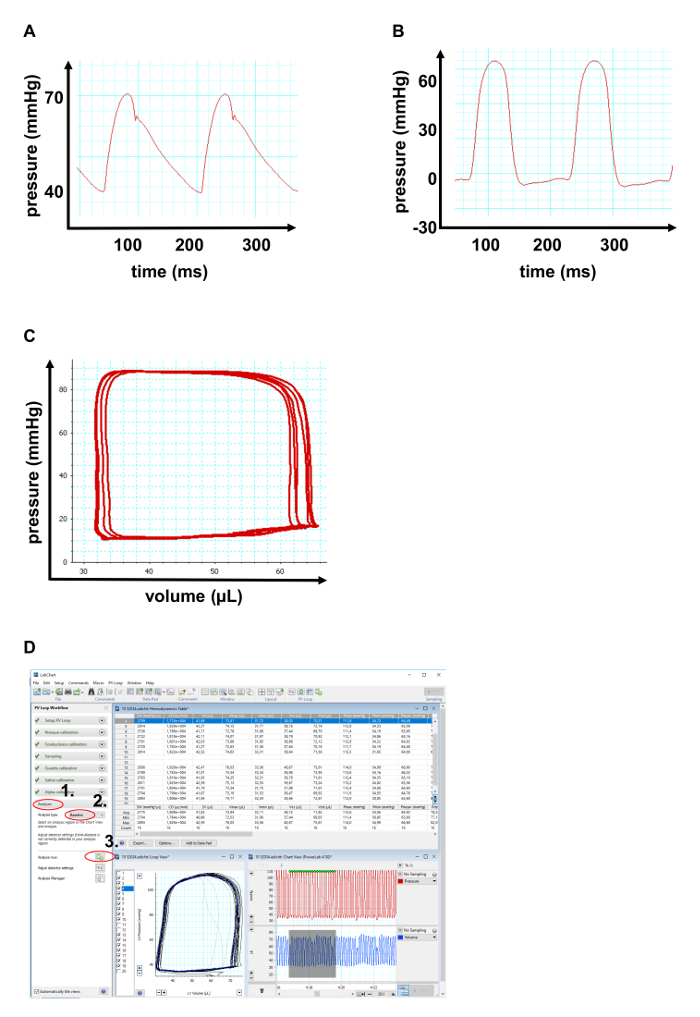 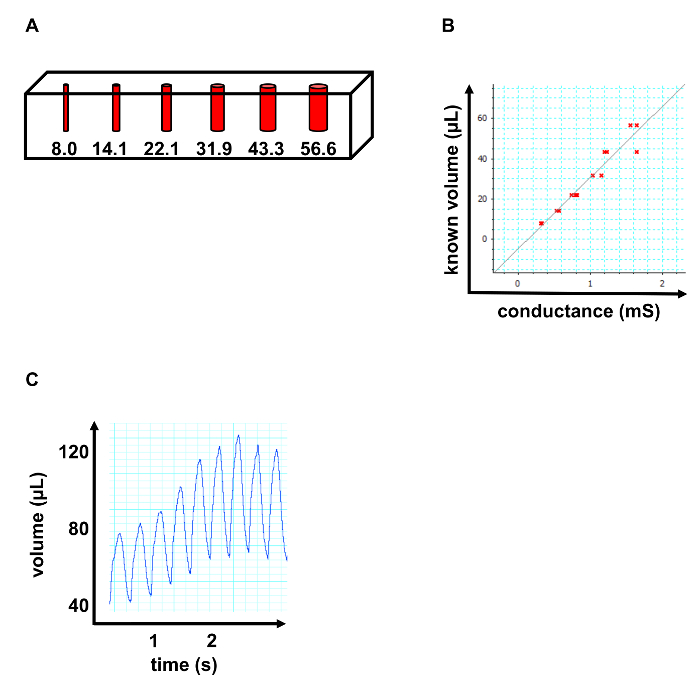 PV monitoring of LV hemodynamics in acute myocardial infarction serves as a novel method for real-time in vivo assessment of cardiogenic shock and impaired LV function in I/R injury. PV catheterization can provide a broad spectrum of parameters with regard to LV systolic and diastolic function. In addition to the LV volumetric parameters typically obtained by echocardiography or MRI (chamber volumes, EF, stroke volume, and cardiac output), PV analysis yields a more complete profile of LV function by simultaneously providing measures of LV systolic performance (contractility dP/dt, stroke work) and LV compliance (-dP/dt, Tau) as a parameter for diastolic function.

Several factors turned out to be critical for successful data acquisition. Stable anesthesia was crucial for valid PV data since isoflurane showed a strong cardiodepressive effect with drops in pressure, LV EF, and stroke volume. Atraumatic preparation of the carotid artery was important to avoid hypovolemia due to blood loss. Furthermore, compression or injury of the vagus nerve and the carotid body could result in severe impairment of hemodynamics.

The obtained PV data furthermore indicate the importance of a simultaneous acquisition of pressure and volume data for a valid hemodynamic characterization since pressure data alone did not show significant changes throughout the experiment (Figure 4A). The combined PV analysis offered both baseline parameters for LV systolic function (e.g., ejection fraction) as well as parameters for LV contractility (dP/dt) and LV relaxation (-dP/dt, Tau).

Interestingly, acute occlusion of the LCA in patients usually causes a severe deficit of LV function with immediate necessity for mechanical hemodynamic support and is associated with a high mortality rate11,12. LCA occlusion in mice showed less hemodynamic impairment and LCA occlusion-associated death during the procedure was not observed. As a sign of persisting hemodynamic stability during ischemia, systolic LV blood pressure was stable at all time (Figure 4A). However, this effect could be caused by more distal ligations in mice compared to LCA occlusions in humans. 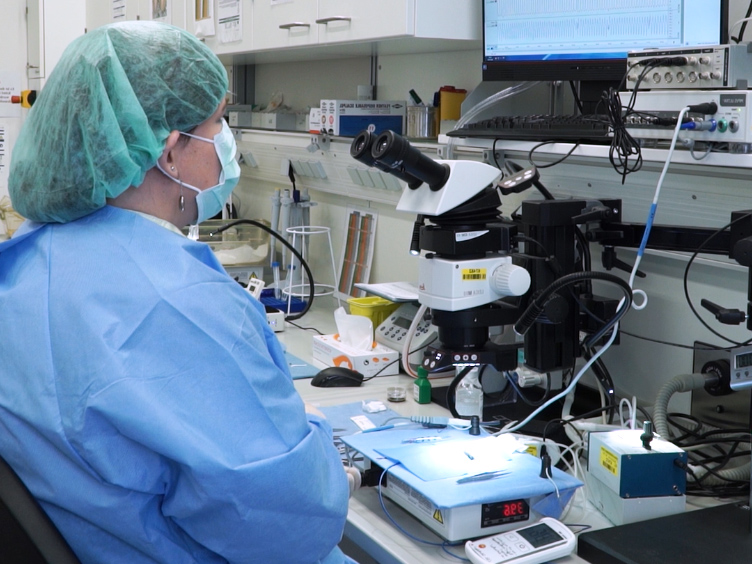