This protocol aims at generating directly reprogrammed interneurons in vivo, using an AAV-based viral system in the brain and a FLEX synapsin-driven GFP reporter, which allows for cell identification and further analysis in vivo.

Converting resident glia in the brain into functional and subtype-specific neurons in vivo provides a step forward towards the development of alternative cell replacement therapies while also creating tools to study cell fate in situ. To date, it has been possible to obtain neurons via in vivo reprogramming, but the precise phenotype of these neurons or how they mature has not been analyzed in detail. In this protocol, we describe a more efficient conversion and cell-specific identification of the in vivo reprogrammed neurons, using an AAV-based viral vector system. We also provide a protocol for functional assessment of the reprogrammed cells’ neuronal maturation. By injecting flip-excision (FLEX) vectors, containing the reprogramming and synapsin-driven reporter genes to specific cell types in the brain that serve as the target for cell reprogramming. This technique allows for the easy identification of newly reprogrammed neurons. Results show that the obtained reprogrammed neurons functionally mature over time, receive synaptic contacts and show electrophysiological properties of different types of interneurons. Using the transcription factors Ascl1, Lmx1a and Nurr1, the majority of the reprogrammed cells have properties of fast-spiking, parvalbumin-containing interneurons.

The overall goal of this method is to efficiently convert brain resident glia in vivo into functional and subtype-specific neurons such as parvalbumin-expressing interneurons. This provides a step forward towards the development of an alternative cell replacement therapy for brain diseases without the need for an exogenous cell source. It also creates a tool to study cell fate switches in situ.

The brain has only a limited capacity for generating new neurons. Therefore, in neurological diseases, there is a need of exogenous cell sources for brain repair. For this, different sources of cells have been subjected to intense research over the years, including cells from primary tissue, stem cell-derived cells and reprogrammed cells1,2,3. Direct reprogramming of resident brain cells into neurons is a recent approach that could provide an attractive method for brain repair as it uses the patient’s own cells for generating novel neurons inside the brain. To date, several reports have shown in vivo reprogramming through viral vector delivery in the brain4,5,6,78,9 in different brain regions such as the cortex, spinal cord, striatum and the midbrain5,10,11, as well as in intact and lesioned brain5,8,11,12. Both inhibitory and excitatory neurons have been obtained4,8, but the precise phenotype or functionality of these cells has not yet been analyzed in detail.

In this protocol, we describe a more efficient reprogramming and cell-specific identification of in vivo reprogrammed neurons. We provide a protocol for functional assessment of the neuronal maturation and phenotype characterization based on functionality and immunohistochemical traits.

We used a Cre-inducible AAV vector and a GFP reporter to identify the in vivo reprogrammed neurons. This choice of viral vectors has the advantage of infecting both dividing and non-dividing cells of the brain, increasing the number of targeted cells, as an alternative to the use of retrovirus7,8. A neuron-specific synapsin-driven FLEX reporter (GFP), enabled us to specifically detect the newly generated neurons. Previous studies have used subtype-specific promoters for in vivo reprogramming7,9, that also allow the expression of reprogramming genes and reporters in specific cell types. However, that method requires further identification of reprogrammed neurons by postmortem analysis of the co-expression of reporter and neuronal markers. The use of a neuron-specific reporter, such as the one described herein, allows for a direct identification. This provides a direct proof of a successful conversion and allows a live cell identification that is required for patch-clamp electrophysiology.

All experimental procedures were carried out under the European Union Directive (2010/63/EU) and approved by the ethical committee for the use of laboratory animals at Lund University and the Swedish Department of Agriculture (Jordbruksverket). Mice are housed in a 12 h light/dark cycle with ad libitum access to food and water.

2. Injection of Reprogramming Factors into the Brain

The injection of AAV vectors is used to successfully reprogram resident NG2 glia cells into neurons in the NG2-Cre mouse striatum (Figure 1A). To specifically target NG2 glia, FLEX vectors with reprogramming/reporter genes, are inserted in an antisense direction and flanked by two pairs of antiparallel, heterotypic loxP sites (Figure 1B). Each of the three reprogramming genes (Ascl1, Lmx1a and Nurr1) is placed under the control of the ubiquitous cba promoter on individual vectors. In order to make sure GFP expression is restricted to reprogrammed neurons originating from a Cre-expressing cell, GFP is placed under the control of the neuron-specific synapsin promoter, (also in a FLEX vector).

The reprogrammed neurons that are biocytin-filled are visible after post-mortem immuno-staining (Figure 2A). If conversion is successful, there should be extensive neuronal morphology. The electrophysiological recordings of reprogrammed neurons show presence of postsynaptic functional connections with spontaneous activity measures (Figure 2B,C). This can be blocked with either ionotropic GABAergic or glutamatergic blocker (Picrotoxin or CNQX), suggesting both excitatory and inhibitory synaptic input to the reprogrammed neurons. The occurrence of spontaneous activity increases with time post viral injection (Figure 2D), indicating a gradual maturation.

The firing patterns of a neuron is cell type specific as it depends on factors such as the morphology of the cells and channel expression15. The recorded patterns in the in vivo reprogrammed neurons can be distinguished into groups and compared to that of endogenous neuronal subtypes, e.g. fast-spiking interneurons (Cell Type B, Figure 3B) or other cell types (Figure 3A,C,D). The observed electrophysiological differences can be confirmed by the presence of specific subtype markers and co-expression with GFP (Figure 3E-H). Altogether, this data indicates that the reprogrammed neurons present in the striatum have properties of different types of interneurons, such as Parvalbumin-, ChAt- and NPY- expressing interneurons, as well as striatal medium spiny neuron identity (DARPP32+) (Figure 3E-H). 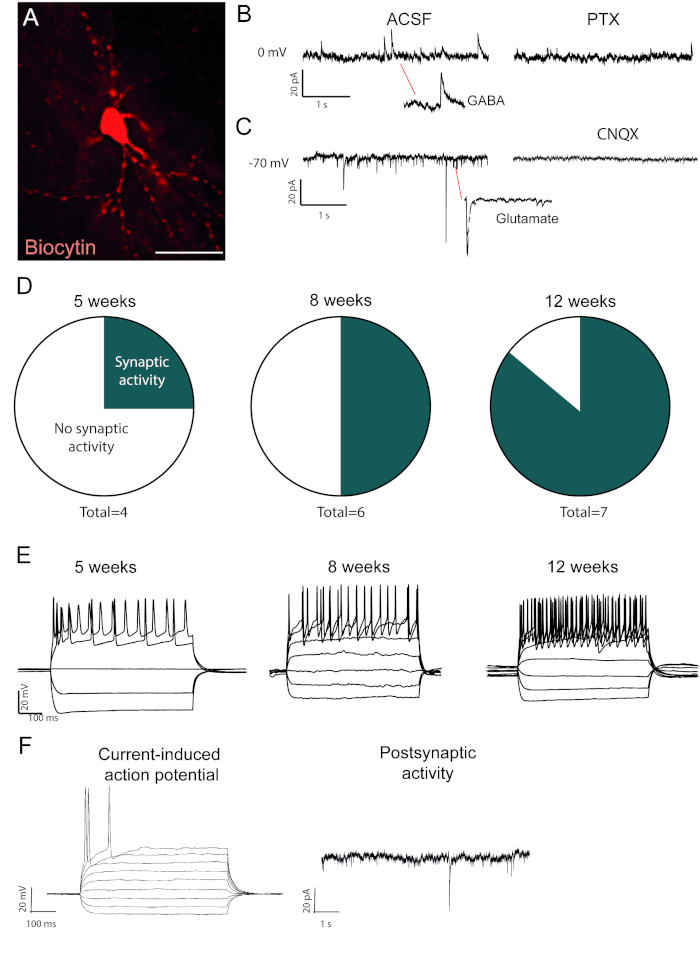 Figure 2: In vivo reprogrammed neurons are functional and show maturation over time. (A) Biocytin-filled reprogrammed neuron, shows mature neuronal morphology, including dendritic spines. Traces shows (B) inhibitory (GABAergic) activity that is blocked with picrotoxin, a GABAA receptor antagonist and (C) excitatory activity that is blocked with CNQX, an AMPA receptor antagonist. (D) The number of neurons with postsynaptic activity increases over time. (E) Patched neurons show repetitive firing already at 5 weeks post-injection (w.p.i.) and continue to show that at 8 and 12 w.p.i. (F) Current-induced action potential and postsynaptic activity of an immature neuron, showing few synaptic events and few action potentials compared to B and D. Scale bar = 25 μm Please click here to view a larger version of this figure. 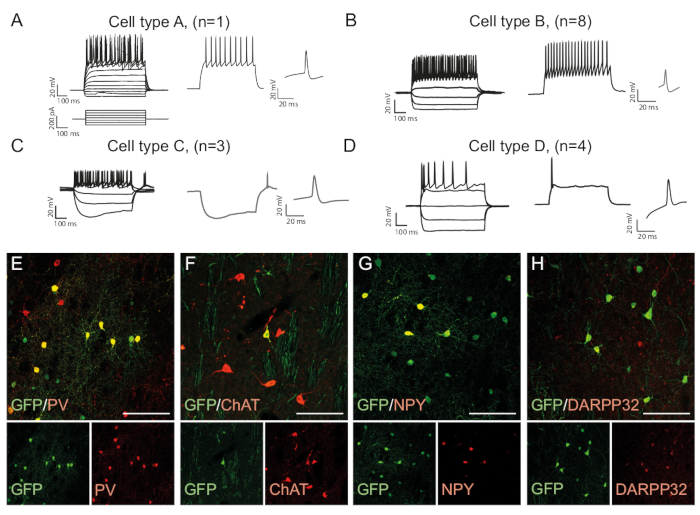 In vivo direct reprogramming can be achieved using AAV FLEX vectors in Cre-expressing mouse strains. It is important to note that differences between mouse strains with regards to reprogramming efficacy have been observed. For in vivo reprogramming in the striatum, the NG2-Cre mouse line has proved to be the more efficient when compared with other strains. Prior to starting to use a new animal strain, it is important to check the mouse provider guidelines regarding Cre expression over time, as the age of animals often impacts the specificity of this protein expression. In our studies, animals older than 12 weeks were not used for in vivo reprogramming as there was a risk for Cre expression in cells other than NG2 glia. The constant presence and monitoring of control animals injected only with Synapsin-FLEX-GFP construct is advised. This allows monitoring of the animals for GFP-positive cells that should not be present if no reprogramming genes (ALN) are used.

We have previously shown11 that it is not reliable to predict the outcome of in vivo reprogramming based on in vitro reprogramming experiments using the same reprogramming factors. All factors of interest therefore need to be tested in vivo. In our hands, many different factor combinations give the same subtype of neurons (i.e., interneurons11 in vivo) despite the fact that these genes have been implicated in the development of other neurons.

Whole-cell patch clamp for reprogrammed neurons is a delicate technique and tissue processing is important for a good outcome. Perfusion with ice-cold Krebs solution improves tissue quality. Also, patched neurons need to be treated carefully. Even if maturation and phenotypic identity of reprogrammed neurons can be somewhat assessed using whole-cell patch clamp, these cells are not fully comparable to their endogenous counterparts. Additional types of analysis, such as genome sequencing (e.g., RNA sequencing) should be used to further confirm reprogrammed cell identity.

The technique described herein is could be considered for the development of future therapies where neuronal replacement is needed in the brain. Although in vivo reprogramming is still at its early stages and the translation into humans is not yet foreseen, this technique could provide a method to assess exogenous gene function in the brain and study cell maturation in vivo.

Marcella Birtele has been funded by European Union Horizon 2020 Program (H2020-MSCA-ITN-2015) under the Marie Skłodowska-Curie Innovative Training Networks and Grant Agreement No. 676408. Daniella Rylander Ottosson has been funded by Swedish Research Council (2017-01234). 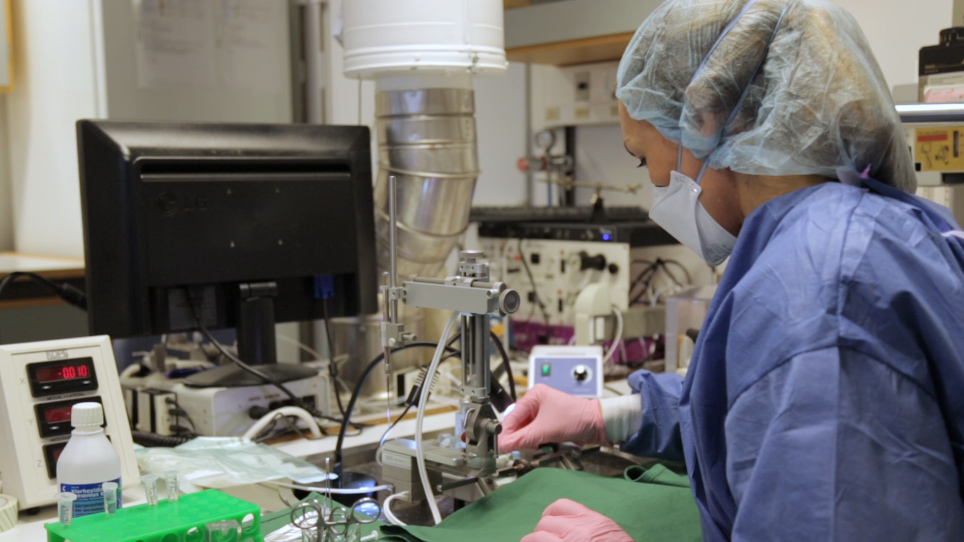