This protocol is a guide for implementing interference reflection microscopy on a standard fluorescence microscope for label-free, high-contrast, high-speed imaging of microtubules using in vitro surfaces assays.

There are several methods for visualizing purified biomolecules near surfaces. Total-internal reflection fluorescence (TIRF) microscopy is a commonly used method, but has the drawback that it requires fluorescent labeling, which can interfere with the activity of the molecules. Also, photobleaching and photodamage are concerns. In the case of microtubules, we have found that images of similar quality to TIRF can be obtained using interference reflection microscopy (IRM). This suggests that IRM might be a general technique for visualizing the dynamics of large biomolecules and oligomers in vitro. In this paper, we show how a fluorescence microscope can be modified simply to obtain IRM images. IRM is easier and considerably cheaper to implement than other contrast techniques such as differential interference contrast microcopy or interferometric scattering microscopy. It is also less susceptible to surface defects and solution impurities than darkfield microscopy. Using IRM, together with the image analysis software described in this paper, the field of view and the frame rate is limited only by the camera; with a sCMOS camera and wide-field illumination microtubule length can be measured with precision up to 20 nm with a bandwidth of 10 Hz.

Label-free imaging of microtubules is of interest as it circumvents the need for fluorescent labeling of tubulin to generate contrast in the images. Fluorescent labeling has several drawbacks: it not feasible if the protein concentration is low1 and photobleaching and photodamage limit the observation time. Several techniques have been used to image label-free microtubules, including video-enhanced differential interference contrast microscopy (DIC) and darkfield microscopy2,3,4,5. Recently, interferometric scattering microscopy (iSCAT)6, rotating-coherent-scattering microscopy (ROCS)7 and spatial light interference microscopy (SLIM)8, have also been used. All these techniques are capable of imaging microtubules and have proved to be valuable for studying microtubule dynamics. However, each have their own limitations. In DIC the contrast depends on the angle between the microtubule and the Nomarski prism axis.  In darkfield, the microtubule signal is degraded by scattered light from impurities or surfaces defects. Though iSCAT exhibits extraordinary sensitivity (down to single proteins) and ROCS can image microtubules deeper into the sample, both methods are technically demanding, requiring laser scanners.

This protocol demonstrates how interference reflection microscopy (IRM)9, 10 can be set up as an alternative technique for label-free imaging of microtubules. IRM is easy to implement as it requires only the addition of an inexpensive 50/50 mirror to a standard fluorescent microscope. When used in conjunction with the software described here, IRM produces high contrast microtubule images, can image large fields of view at high speed, requires a onetime alignment, and can easily be combined with other techniques such as fluorescence imaging.

2. Chamber preparation to adhere microtubules to the surface

NOTE: For analysis, this protocol uses Fiji14 but the reader is free to use any software she/he find suitable.

NOTE: An important factor for acquiring high contrast images of microtubules using IRM is setting the illumination numerical aperture (INA) correctly10,15. The INA can be changed by changing the size of the incoming illumination beam at the objective’s exit pupil which is controlled by the size of the AD (the AD is located at a conjugate plane with the exit pupil (back focal plane) of the objective, Figure 1):

where DAD is the diameter of the aperture diaphragm, fobjective is the focal length of the objective and Dep is the objective’s exit pupil diameter. Typically, the AD is left fully open for fluorescence imaging, so the INA equals the objective’s NA. In a fluorescence microscope, the AD scale does not indicate its diameter, thus the INA can’t be calculated. It’s possible to calibrate the AD size with the help of an objective. Yet, it’s not necessary since the AD size would be fixed to the size that produces the highest contrast.

As mentioned above, with a well aligned microscope, microtubules should be visible without background subtraction (Figure 4A). Subtracting the background (Figure 4B) enhances the contrast of microtubule (Figure 4C). To further enhance the contrast, averaging or Fourier filtering or a combination of both can be used (Figure 4D,F,E). The line scans in Figure 4G shows the incremental improvement of image quality. Notice the reduction of background noise with each processing step. 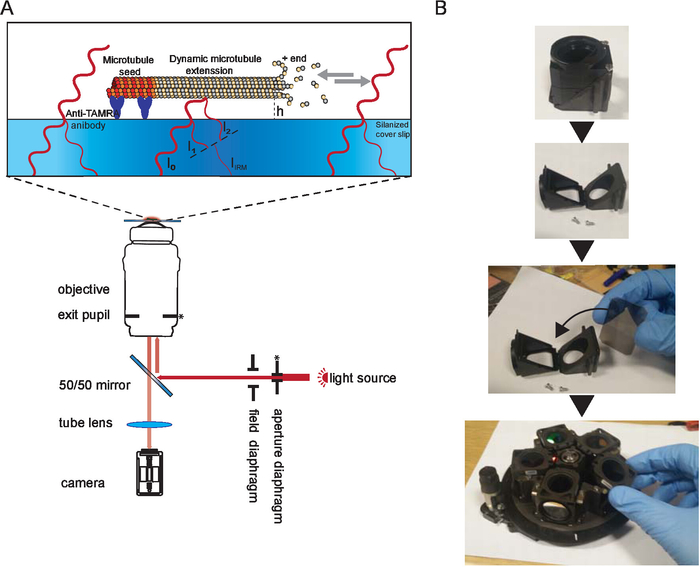 Figure 1. Schematic representation of IRM. (A) Epi-illumination from the light source passes through the aperture diaphragm before reaching the 50/50 mirror. The aperture diaphragm sets the beam width thus the illumination NA. The 50/50 mirror partially reflects the light up to the objective to illuminate the sample. Light reflected from the sample is collected and then projected onto the camera chip (by the tube lens) where it interferes to generate the image. Image contrast is the result of the interference between the light reflected from the glass/water interface (I1) and the light reflected from the water/microtubule interface (I2). Depending on the microtubule/surface distance (h), the optical path difference between I1 and I2 will result in a constructive (bright signal) or destructive (dark signal) or anything in between. For example, if light with a wavelength of 600 nm is used for imaging, the contrast will switch between dark and bright when the microtubule height changes by about 100 nm. The asterisk indicate conjugate planes  (modified from15). (B) Example of the 50/50 mirror installation. A suitable filter cube was opened and the mirror was inserted where a dichroic mirror usually sits. The mirror was oriented as per manufacturer instructions. Then the cube was inserted in the filter wheel which was inserted back to the microscope (not shown). During the installation, gloves were used, and the mirror was only held by the edges. Please click here to view a larger version of this figure. 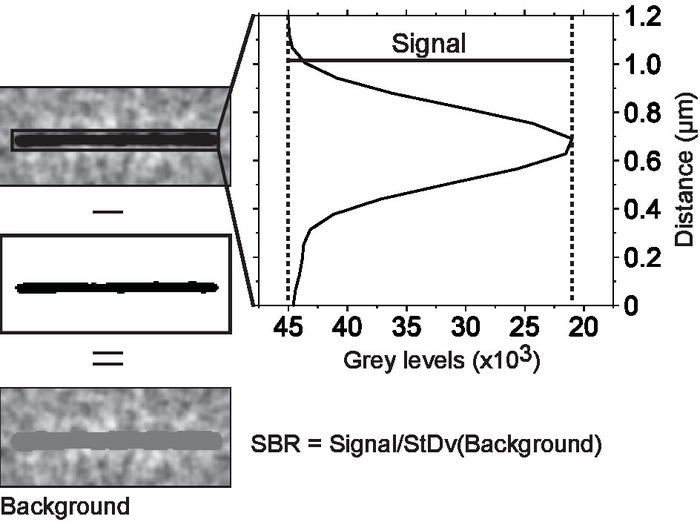 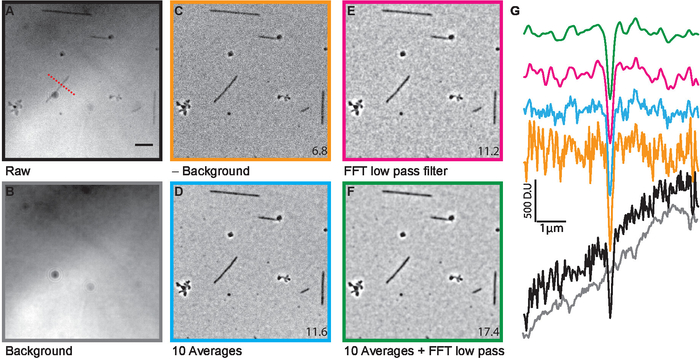 Figure 4. Image processing. After acquiring raw images (A), the background (B) was subtracted (C) to enhance the microtubule contrast. To further improve the contrast the images were either averaged (D) or Fourier filtered (E) or both (F). The line scans (G), whose location is indicated by the dashed red line in (A) are color matched to the various images in (A) to (F). The numbers at the lower corner are average SBRs measured for the whole field of view. The scale bar is 5 µm (modified from15) . Please click here to view a larger version of this figure. 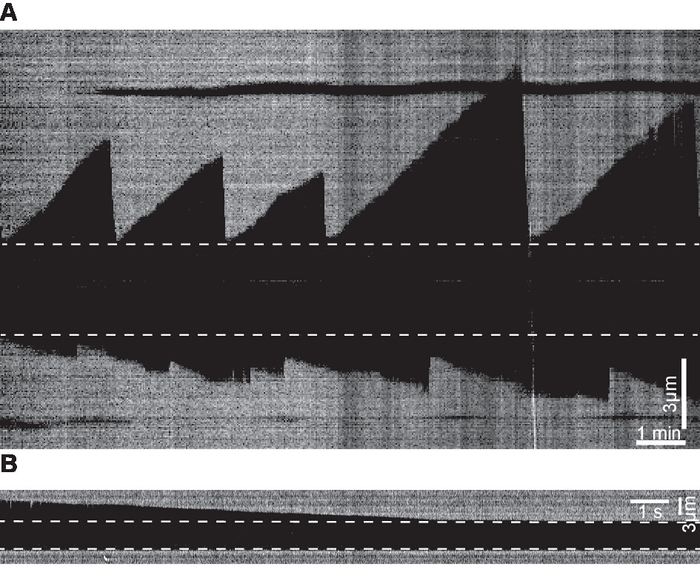 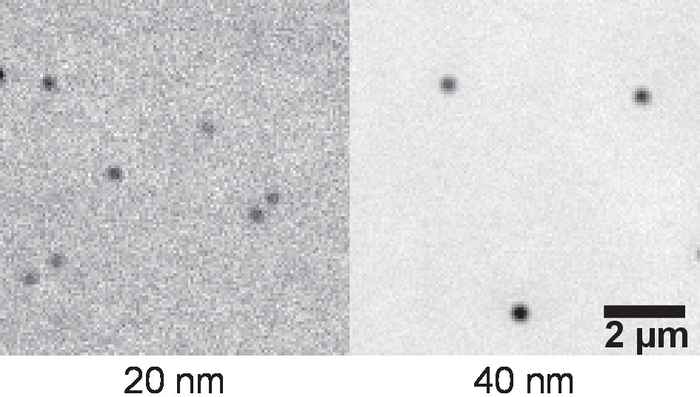 Figure 6. Example of gold nanoparticles imaged with IRM. Gold nanoparticles of sizes 20 and 40 nm were passively attached to the surface. 10 images were acquired. After background subtraction, the images were averaged to enhance contrast. Please click here to view a larger version of this figure. 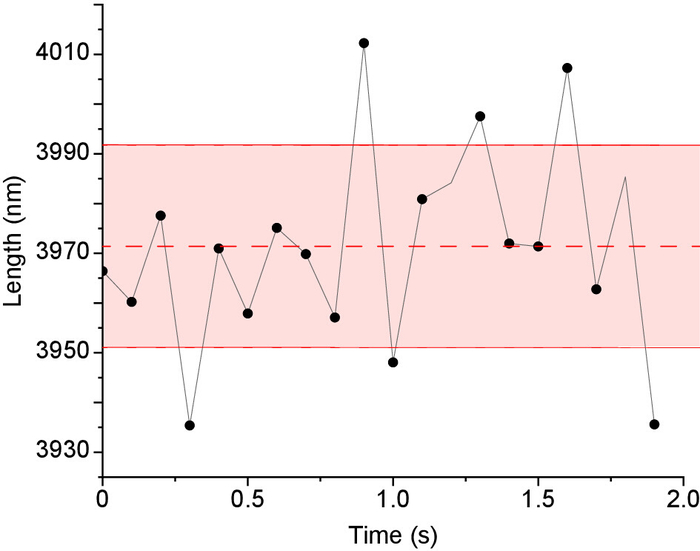 This protocol demonstrated the successful use of IRM for imaging and measurement of the microtubule dynamics. Care should be given to correctly set the illumination numerical aperture as it has the strongest impact on image contrast. Also, using high numerical aperture (NA) objectives is important for getting high resolution/high contrast images, as higher NA objective have higher light collecting power compared to low NA objectives. The cleaner the surface and solutions used the lower the noise as dirt ends up attaching to the surface and adding (over the course of the experiment) speckle like noise to the images. Acquisition of a background image is important as well as it removes illumination inhomogeneities, static noise and surface irregularities.

A recommended modification is to introduce a long pass filter (>600 nm) in the illumination path. The spectrum of white light sources typically contains wavelengths in the UV which can damage microtubules. In addition, using long wave length for IRM comes in handy when combining IRM with fluorescence (e.g., when studying the effect of microtubule associated proteins (MAPs) on microtubule dynamics). Be aware that when imaging for expended period of times, sample drift (especially along the optical axis) decreases image contrast due to the deviation of the image plane from the background plane. Modern microscopes are often equipped with stabilization mechanisms (e.g., perfect focus (Nikon), Definite focus.2 (Zeiss), IX3-ZDC2 (Olympus)). An alternative solution is to thermally stabilize the setup either passively or actively18 or by correcting for drift19,20,21. Finally, microtubule contrast can be increased by reducing the size of field diaphragm (a 70% opening is good choice as it is a balance between increasing contrast and field of view size)15.

While IRM is suitable for imaging microtubules it is not sensitive enough to detect single proteins. For such application, iSCAT is a more suitable technique. Similarly, fluorescence and iSCAT are better suited if tracking precision of less than 10 nm is needed. For IRM, the measured length tracking precision is ~20 nm as shown in Figure 7.

Use of IRM in surface assays can go beyond microtubules; for example, molecular motors can be labelled with gold nanoparticles and tracked as they interact with microtubules. In addition a more advanced form of IRM known as reflective interference contrast microscopy (RICM)22 can, in principle, be used to further enhance microtubules contrast and obtain higher tracking precision.

The Authors thank Anna Luchniak and Yin-wei Kuo for critical reading and comments on the protocol. 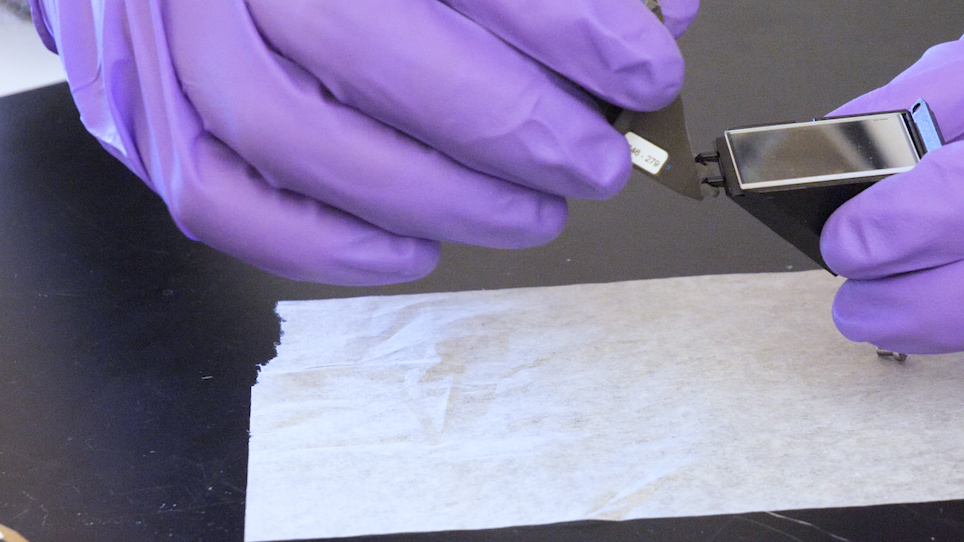