Hypoxia ischemia is the most common cause of neonatal seizures. Animal models are crucial for understanding the mechanisms and physiology underlying neonatal seizures and hypoxia ischemia. This manuscript describes a method for continuous video electroencephalogram (EEG) monitoring in neonatal mice to detect seizures and analyze EEG background during hypoxia ischemia. Use of video and EEG in conjunction allows description of seizure semiology and confirmation of seizures. This method also allows analysis of power spectrograms and EEG background pattern trends over the experimental time period. In this hypoxia ischemia model, the method allows EEG recording prior to injury to obtain a normative baseline and during injury and recovery. Total monitoring time is limited by the inability to separate pups from the mother for longer than four hours. Although, we have used a model of hypoxic-ischemic seizures in this manuscript, this method for neonatal video EEG monitoring could be applied to diverse disease and seizure models in rodents.

Hypoxic ischemic encephalopathy (HIE) is a condition that affects 1.5 in 1000 newborns annually and is the most common cause of neonatal seizures1,2. Infants who survive are at risk for various neurological disabilities such as cerebral palsy, intellectual disability, and epilepsy3,4,5.

Continuous video electroencephalography (EEG) monitoring used in conjunction with this injury model allows for further understanding and characterization of neonatal hypoxic ischemic seizures. Previous studies have used various methods for analyzing neonatal seizures in rodents, including video recordings, limited EEG recordings and telemetry EEG recordings10,11,12,13,14,15,16. In the following manuscript, we discuss in depth the process of recording continuous video EEG in mouse pups during hypoxia-ischemia. This technique for continuous video EEG monitoring in neonatal mouse pups could be applied to a variety of disease and seizure models.

All animal studies were approved by the Institutional Animal Care and Use Committee (IACUC) of the University of Virginia.

Neonatal hypoxia-ischemia exposure results in both generalized and focal seizures in mice (Figure 1A-C). Video EEG recordings allow electrographic findings to be correlated to behavior on video. These behaviors were scored using a previously published neonatal rodent behavioral seizure score (BSS)16. In addition to BSS, we categorized events based on whether the behavior was focal/unilateral, bilateral, or mixed (Figure 1B).

In this model, mice generally exhibited 3 patterns of seizure semiology: 1) repetitive circling to the side of ligation with extension of contralateral extremities, 2) loss of posture with body flexion and tail curled to side of ligation, or 3) loss of posture with unilateral or bilateral paddling of extremities (varying severity and length). The majority of observed events involved focal/unilateral or mixed behaviors (Figure 1B). In addition, during the hypoxic period, a subset of mice exhibited non-convulsive seizure activity, where the pup was immobile with sustained seizure activity on EEG (Figure 1C).

EEG recording was started 30 minutes prior to carotid ligation in order to obtain a pre-injury baseline. Baseline activity (Figure 1A and Figure 2A) was similar to previously described background in p10 mouse pups17. Following ligation, pups were immediately placed back on video EEG. During the period between ligation and commencement of hypoxia, a subset of mice exhibits convulsive seizures (Figure 1A-C).

Following hypoxia induction, background amplitude on EEG reduced (Figure 3B) and intermittently exhibited bursts of spike-wave discharges, followed by suppression (Figure 2A). Mice exhibit electrographic seizures, which emerge from a suppressed background as rhythmic spike-wave discharges and progress to become more complex and frequent, with polyspike waves (Figure 2B). During hypoxia, power spectrogram analysis was notable for asymmetries between the ischemic and contralateral hemisphere (Figure 3A,B). The ischemic hemisphere exhibited a burst suppression pattern and the contralateral hemisphere exhibited suppressed background (Figure 1A and Figure 3A,B). On average seizures begin 5.5±8.1 minutes after induction of hypoxia, with each event lasting 56±57 seconds. There was a 13% mortality rate during hypoxia (n=4/30), with all deaths following a convulsive (BSS=5-6) seizure.

During reoxygenation and recovery, a subset of mice continues to have seizures over the remainder of the recording period (2 h post-hypoxia). EEG background was suppressed compared to baseline following hypoxia (Figure 1A and Figure 3), with gradual recovery during the post-hypoxia recording period. Over the entire recording period, mice exhibited on average 9±5 seizure events, each lasted 54±57.7 s.

Figure 1: Seizure characteristics in p10 mice exposed to neonatal hypoxia–ischemia. (A) Representative power spectrogram from the ischemic parietal cortex electrode through the experimental timeline. (Amplitude color heat map scale x10–6). Arrows indicate the time that raw electroencephalogram tracings below the spectrogram represent. (B) Seizure behaviors for the entire experiment, postischemia/prehypoxia, during hypoxia, and posthypoxia. (C) Behavioral seizure score (BSS) and timing for all seizure events (n = 30 mice, each mouse has a unique symbol, each point is a discrete seizure event). 100% of mice seized during hypoxia (blue box; time = −60 minutes is the completion of carotid ligation, time=0 is the start of hypoxia). Thirteen percent died during hypoxia following a convulsive seizure (grade 5–6). This figure has been modified from Burnsed et al13. Please click here to view a larger version of this figure.

Figure 2: Characteristic electroencephalography (EEG) patterns during hypoxia ischemia. (A) EEG background from left to right: preinjury baseline, burst suppression during hypoxia, posthypoxia suppression. Recording from ipsilateral parietal cortex depth electrode. (B) Evolution of a seizure during hypoxia. Recording from ipsilateral hippocampal depth electrode. Shaded boxes (I-V) corresponded to expanded EEG excerpts on the right of (B). This figure has been modified from Burnsed et al13. Please click here to view a larger version of this figure. 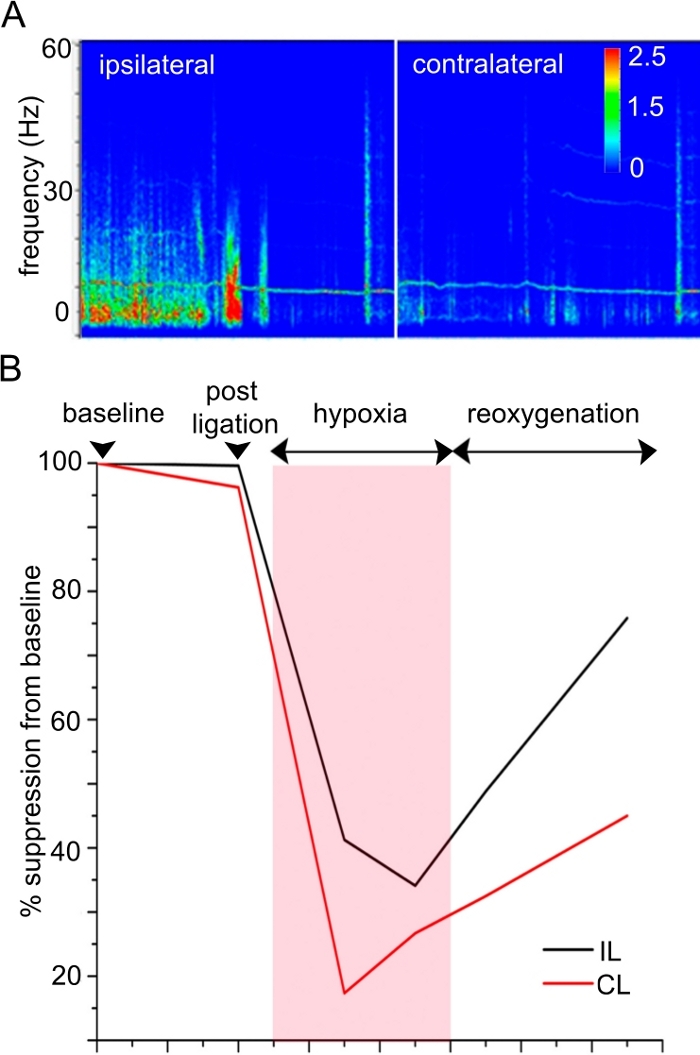 Figure 3: Asymmetries in EEG background between ischemic and contralateral hemispheres. (A) Asymmetric power spectrogram in HI mice during hypoxia (45-minute period) in ischemic cortex (left) and contralateral cortex (right; amplitude scale x10–6). Burst suppression pattern and seizures in ischemic hemisphere, suppression in CL hemisphere. (B) Background suppression during hypoxia and reoxygenation in IL and CL hemispheres. All measurements of mean voltage taken from 10-second random excerpts of the encephalogram over the experimental time period (baseline, 30 minutes postligation, during hypoxia—15 minutes and 30 minutes after start, after reoxygenation—15 minutes and 60 minutes after start) were compared to baseline. Each animal’s baseline served as its own control, and data are reported as a percentage of baseline (n = 5 mice). Measurements were taken from cortical electrodes. This figure has been modified from Burnsed et al13. Please click here to view a larger version of this figure.

We have presented a model for continuous video-EEG monitoring in neonatal mice during hypoxic-ischemic seizures. Video analysis in conjunction with EEG allows characterization of seizure semiology. Analysis of EEG allows for extraction of power spectrograms and background amplitude analysis.

One limitation of this method is the limit of spatial localization of depth electrode recordings in a small neonatal brain. This restricts the ability to localize specific seizure foci on EEG recordings. Another limitation in this model of hypoxia ischemia is the variability in seizure burden. Variability in lesion size and behavioral deficits in this rodent model of hypoxia ischemia has been well described previously7,8,19. Not surprisingly, this variability exists in seizure burden (both length of seizure events and number of seizure events). However, consistently, 100% of pups in this model exhibit seizures during hypoxia. Lastly, the amount of time pups can be on EEG monitoring (away from the mother) is limited. Therefore, we are unable to characterize ongoing seizures with continuous EEG at later time points relative to the injury.

Although, we have used a hypoxia-ischemia seizure model in this manuscript, this method for continuous video-EEG monitoring in neonatal mouse pups could be easily applied to other disease/seizure models. Seizures in neonatal rodents are difficult to recognize based on behavior alone, making video-EEG monitoring important. Future investigations could use these techniques to analysis seizure burden and semiology in other neonatal seizure models or response to therapeutics and neuroprotective measures.