Polysome fractionation by sucrose density gradient centrifugation is a powerful tool that can be used to create ribosome profiles, identify specific mRNAs being translated by ribosomes, and analyze polysome associated factors. While automated gradient makers and gradient fractionation systems are commonly used with this technique, these systems are generally expensive and can be cost-prohibitive for laboratories that have limited resources or cannot justify the expense due to their infrequent or occasional need to perform this method for their research. Here, a protocol is presented to reproducibly generate polysome profiles using standard equipment available in most molecular biology laboratories without specialized fractionation instruments. Moreover, a comparison of polysome profiles generated with and without a gradient fractionation system is provided. Strategies to optimize and produce reproducible polysome profiles are discussed. Saccharomyces cerevisiae is utilized as a model organism in this protocol. However, this protocol can be easily modified and adapted to generate ribosome profiles for many different organisms and cell types.

Ribosomes are mega-Dalton ribonucleoprotein complexes that perform the fundamental process of translating mRNA into proteins. Ribosomes are responsible for carrying out the synthesis of all proteins within a cell. Eukaryotic ribosomes comprise two subunits designated as the small ribosomal subunit (40S) and the large ribosomal subunit (60S) according to their sedimentation coefficients. The fully assembled ribosome is designated as the 80S monosome. Polysomes are groups of ribosomes engaged in translating a single mRNA molecule. Polysome fractionation by sucrose density gradient centrifugation is a powerful method used to create ribosome profiles, identify specific mRNAs associated with translating ribosomes and analyze polysome associated factors1,2,3,4,5,6,7,8,9,10,11,12,13. This technique is often used to separate polysomes from single ribosomes, ribosomal subunits, and messenger ribonucleoprotein particles. The profiles obtained from fractionation can provide valuable information regarding the translation activity of polysomes14 and the assembly status of the ribosomes15,16,17.

Ribosome assembly is a very complex process facilitated by a group of proteins known as ribosome assembly factors18,19,20,21. These factors perform a wide range of functions during ribosome biogenesis through interactions with many other proteins, including ATPases, endo- and exo-nucleases, GTPases, RNA helicases, and RNA binding proteins22. Polysome fractionation has been a powerful tool used to investigate the role of these factors in ribosome assembly. For example, this method has been utilized to demonstrate how mutations in the polynucleotide kinase Grc3, a pre-rRNA processing factor, can negatively affect the ribosome assembly process17,23. Polysome profiling has also highlighted and shown how the conserved motifs within the ATPase Rix7 are essential to ribosome production16.

The procedure for polysome fractionation begins with making soluble cell lysates from cells of interest. The lysate contains RNA, ribosomal subunits, and polysomes, as well as other soluble cellular components. A continuous, linear sucrose gradient is made within an ultracentrifuge tube. The soluble fraction of cell lysate is gently loaded onto the top of the sucrose gradient tube. The loaded gradient tube is then subjected to centrifugation, which separates the cellular components by size within the sucrose gradient by the force of gravity. The larger components travel further into the gradient than the smaller components. The top of the gradient houses the smaller, slower traveling cellular components, whereas the larger, faster traveling cellular components are found at the bottom. After centrifugation, the contents of the tube are collected as fractions. This method effectively separates ribosomal subunits, monosomes, and polysomes. The optical density of each fraction is then determined by measuring the spectral absorbance at a wavelength of 254 nm. Plotting absorbance vs. fraction number yields a polysome profile.

Linear sucrose density gradients can be generated utilizing a gradient maker. Following centrifugation, gradients are often fractionated, and absorbances measured using an automated density fractionation system3,7,13,24,25. While these systems work very well to produce polysome profiles, they are expensive and can be cost-prohibitive to some laboratories. Here a protocol to generate polysome profiles without the use of these instruments is presented. Instead, this protocol utilizes equipment typically available in most molecular biology laboratories.

NOTE: The linear range of the sucrose gradient can be modified to achieve better separation depending on the cell type used. This protocol is optimized for polysome profiles for S. cerevisiae.

Three representative polysome profiles are shown in Figure 3. All profiles are from the same yeast strain. A typical polysome profile will have well-resolved peaks for the 40S, 60S, and 80S ribosomal subunits as well as polysomes. The crest of each ribosomal subunit and polysome peak will be apparent on each profile (Figure 3). A representative profile from an automated density fractionation system is shown in Figure 3A. The sucrose gradients used to generate this profile were prepared by hand as described in this protocol. This profile shown in Figure 3A was produced from a continuous absorbance profile as the sucrose gradient was displaced from the bottom up by a chase solution through a detector flow cell and collected in fractions. Because these systems continuously measure absorbance, they can record over 1,500 data points. It is impractical to manually generate the same number of data points. The fraction volume generally utilized for manual profiles is 100-200 μL. A fraction volume within this range yields a profile with enough detail for most comparative analyses. The representative results obtained from both 100 μL and 200 μL fractionations are shown in Figure 3B and Figure 3C. All three profiles presented utilized sucrose gradients prepared as described in this protocol to compare the data yielded. For an example of a polysome profile that utilizes a gradient maker to prepare sucrose gradients as opposed to the manual preparation described in this protocol, a recent manuscript by Chikashige et al. has several examples of gradient profiles generated using an automated gradient maker and fractionation system13. 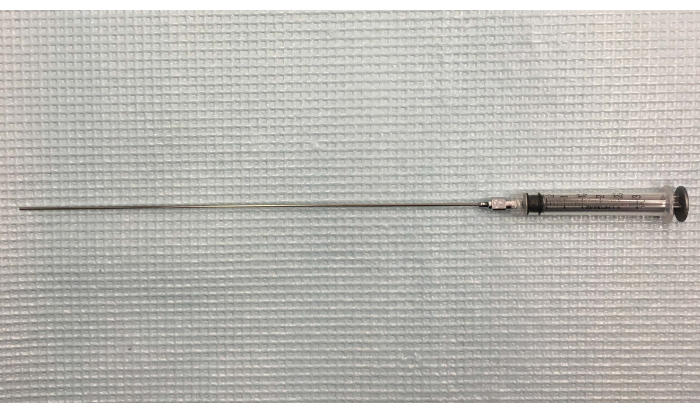 Figure 1: Assembled needle and syringe. A 9 in, 22 G needle with Hamilton needle point style 3 tip attached to a 3 mL syringe via a Luer lock mechanism. Please click here to view a larger version of this figure. 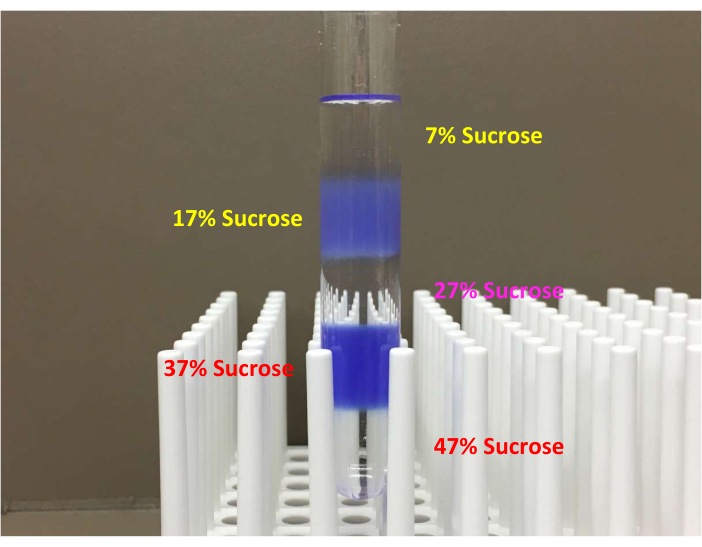 Figure 2: The final appearance of 7%-47% sucrose gradient layers. 7%, 17%, 27%, 37%, and 47% sucrose solutions layered on top of another as described in the protocol. The 17% and 37% layers had blue coloring added to help distinguish the layers for a photograph; no coloring should be added when performing an actual experiment. Please click here to view a larger version of this figure.

This protocol entails careful preparation of sucrose gradients with resolution sufficient to separate ribosomal subunits, monosomes, and polysomes. When preparing sucrose gradients, it is critical not to introduce air bubbles while loading gradient layers. Air bubbles rise to the top from the bottom and can disrupt the linearity of the gradient. Additionally, the outside of the needle should be wiped before each use, and excess sucrose solution should be wicked off from the lumen to ensure the integrity of each gradient layer. Overnight storage of gradients at 4 °C must be done in a cold room. The vibrations caused by a compressor switching on and off in a refrigerator can disrupt the gradient.

Another critical part of this assay is the volume of the gradient and the concentration of the RNA. The 14 mm x 89 mm centrifuge tubes can hold a volume of 12 mL, but this is the maximum volume that can be accommodated by these tubes and this volume is typically thought of as overfilling these tubes. A good maximum working volume that does not overfill these tubes is 11.5 mL. The sucrose gradient itself has a volume of 10 mL; therefore, the volume of polysome extraction buffer used to resuspend cells should not exceed 1.5 mL. The amount of RNA necessary to generate a good profile will vary by cell type. A number of initial runs should be performed to determine what amount of RNA generates a good polysome profile. Once this amount is determined, it should always be used with that specific cell type to maintain reproducibility and to be able to do comparative analysis. Also, to ensure that the same amount of RNA is loaded each time, the method used for RNA quantitation must always be the same. If a spectrophotometer is used to quantitate RNA, then it should be used at all times. If a fluorometer is utilized, then it should be used at all times. Instruments and quantitation techniques vary widely in both accuracy and sensitivity. Utilizing different instruments or techniques to quantitate RNA experiment to experiment will not generate reproducible results.

This method can be adapted to obtain important information about the status of protein translation in a cell. As mentioned above, the condition of the ribosomal subunits themselves within the assembly process can be determined. Performing experiments in the absence of cycloheximide, which inhibits elongation, enables run-off rate analysis, which indicates whether elongation is altered or not26. The individual fractions are a valuable source of material for further experiments and analysis. For example, the fractions can be used in Northern or Western blotting protocols to identify a specific RNA or protein associated with ribosomal subpopulations. Finally, RNA can be extracted from the fractions and used to identify mRNAs bound to active ribosomes by microarray analysis13,27 or by deep sequencing analysis on a DNA library generated from the total mRNA28.