Surface proteins are central to the cell's ability to react to its environment and to interact with neighboring cells. They are known to be inducers of almost all intracellular signaling. Moreover, they play an important role in environmental adaptation and drug treatment, and are often involved in disease pathogenesis and pathology (1). Protein-protein interactions are intrinsic to signaling pathways, and to gain more insight in these complex biological processes, sensitive and reliable methods are needed for studying cell surface proteins. Two-dimensional (2-D) electrophoresis is used extensively for detection of biomarkers and other targets in complex protein samples to study differential changes. Cell surface proteins, partly due to their low abundance (1 2% of cellular proteins), are difficult to detect in a 2-D gel without fractionation or some other type of enrichment. They are also often poorly represented in 2-D gels due to their hydrophobic nature and high molecular weight (2). In this study, we present a new protocol for intact cells using CyDye DIGE Fluor minimal dyes for specific labeling and detection of this important group of proteins. The results showed specific labeling of a large number of cell surface proteins with minimal labeling of intracellular proteins. This protocol is rapid, simple to use, and all three CyDye DIGE Fluor minimal dyes (Cy 2, Cy 3 and Cy 5) can be used to label cell-surface proteins. These features allow for multiplexing using the 2-D Fluorescence Difference Gel Electrophoresis (2-D DIGE) with Ettan DIGE technology and analysis of protein expression changes using DeCyder 2-D Differential Analysis Software. The level of cell-surface proteins was followed during serum starvation of CHO cells for various lengths of time (see Table 1). Small changes in abundance were detected with high accuracy, and results are supported by defined statistical methods.

Table 1. An Ettan DIGE experiment was performed using samples from serum depleted cells labeled according to the cell-surface protein labeling protocol in figure 1. 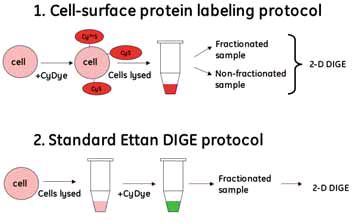 Protein concentrations in the different fractions were determined using the 2-D Quant Kit. The total protein amount derived from 10 x106 CHO-K1 cells was 920 μg in the non-fractionated sample, 225 μg in the membrane/hydrophobic fraction and 770 μg in the cytosolic/hydrophilic fraction. These amounts will most likely vary depending on cell type and cell size. The proportion of proteins that are labeled in the cell-surface protocol may be higher than the standard Ettan DIGE minimal labeling, which is 2-3% of total protein. It seems that only one dye molecule is attached per protein molecule, since the spot shape is round and vertical streaking of the low molecular proteins on the gels is absent (Fig 2 and 3). Two and more dye molecules per protein would cause vertical streaking due to increased molecular weight of the labeled protein. This phenomenon would mostly be seen with the low molecular weight proteins, since a change in molecular weight of these proteins would result in a larger shift on the gel compared to high molecular weight proteins.

Two identical samples of cells were surface labeled with CyDye DIGE Fluor Cy3. One was lysed and used directly for 2-D electrophoresis. The other sample was lysed and fractionated into membrane and cytosolic fractions. The entire fluorescent label appeared in the membrane fraction; the cytosolic fraction was devoid of any labeled proteins (Fig 2). The same gel with the cytosolic protein sample was silver stained and the result showed that there were proteins in the gel, but they were not labeled using the cell-surface protein labeling protocol. These results suggest that this new labeling protocol is specific for cell surface proteins. The CyDye DIGE Fluor minimal dye does not appear to enter the cell or pass through the cell membrane. The cells are kept on ice prior to the labeling and this may reduce any transport across the membrane. The time for CyDye DIGE Fluor minimal dye exposure is also relatively short (20 minutes), which is sufficient for protein labeling but not for entry into the cell. Another possible explanation for the lack of labeling inside the cell is that even if the dye passes across the membrane, the pH inside the cell is too low (< pH 7.4) for an efficient labeling reaction to occur (optimal pH 8.5). The labeling reaction is quenched followed by washing of the cells, which further prevents any protein labeling after the cells have been lysed. This method has been successfully applied to human cell lines in vitro as well as to a complex biological system in vivo 7. 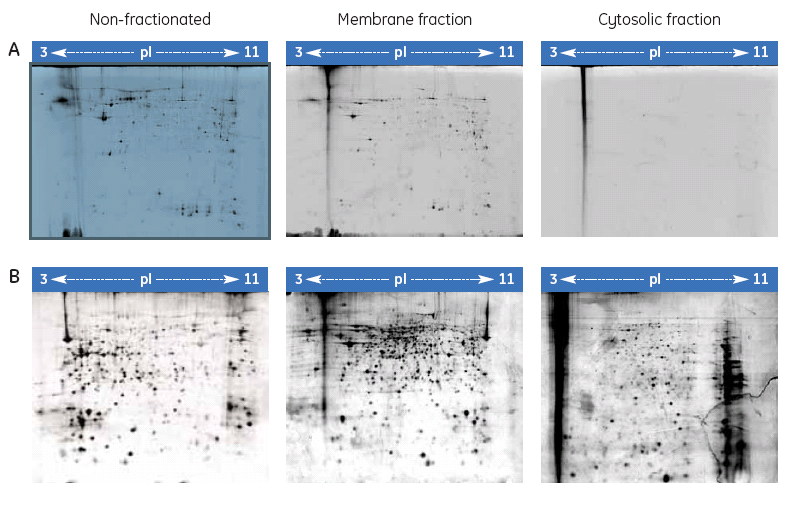 The cellsurface proteins of CHO-K1 cells were labeled with Cy3 and fractionated. The different fractions were separated by 2-D electrophoresis and scanned for Cy3 fluorescence (A). The same gels were then silver stained (B).

To be able to evaluate the advantages with the new cell surface protein labeling protocol, a comparison with the standard Ettan DIGE protocol was performed. Two identical samples from CHO-K1 cells grown in the same flask were labeled in parallel with the two different protocols, respectively (Fig 1). A cell-surface Cy5 labeled sample was run on the same gel as a Cy3 labeled cell lysate. The green spots (Cy3) on the gel (Fig 3A) represent the proteins labeled using the standard Ettan DIGE procedure followed by membrane fractionation. These spots are presumably membrane proteins including cell surface proteins as well as proteins from membranes inside the cell (ER, Golgi, mitochondrion, and nucleus). Standard Ettan DIGE labeling procedure followed by a membrane fractionation step was chosen for comparison, since it should give the highest probability for detecting the low abundant cell surface proteins. The red spots (Cy 5) on the gel (Fig 3A) are cell surface specific proteins labeled using the new cell surface protein labeling protocol that are not visible with the standard labeling procedure (green spots). Furthermore, the yellow spots represent overlapping proteins that occur in both samples using either procedure (Fig 3A). Another useful application would be to combine both labeling protocols to distinguish proteins on the cell surface from those on intracellular membranes. Moreover, information about relative changes in cell surface/membrane protein levels after various stimuli could be followed by using both labeling techniques simultaneously. 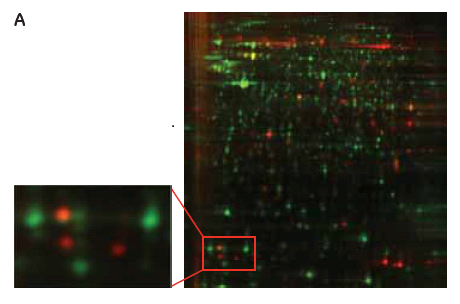 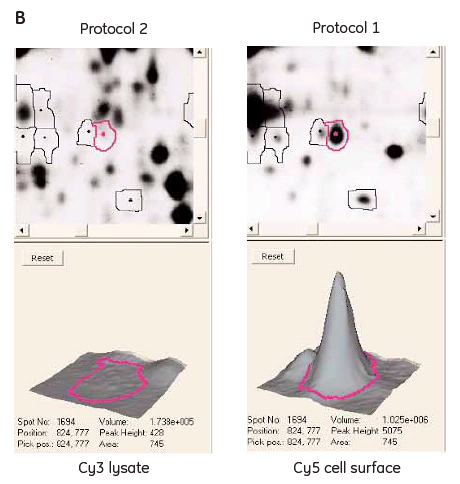 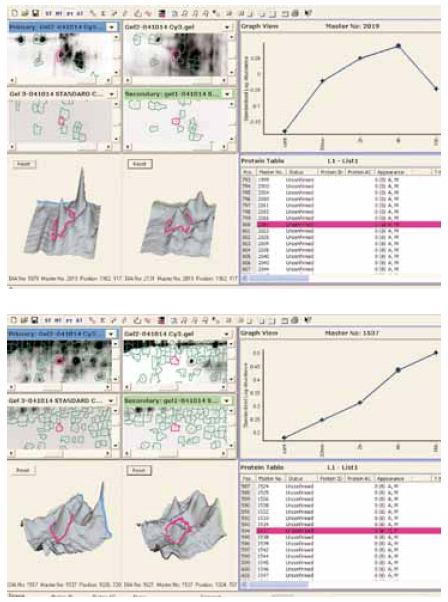 Multiplexing is achieved using the three CyDye DIGE Fluor minimal dyes, and in combination with DeCyder 2-D software, this new protocol is a powerful tool for studying cell surface proteins with all the advantages obtained with the 2-D DIGE technology.

We thank Professor Dontscho Kerjaschki, Corina Mayrhofer and Sigurd Krieger at the Institute of Clinical Pathology, University of Vienna, Austria for their collaboration. 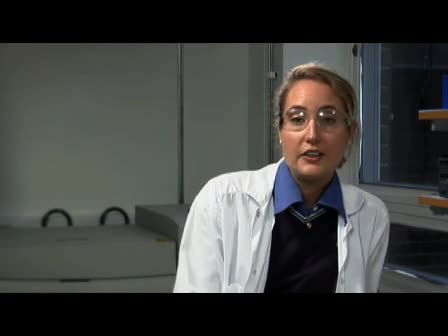