Laser ablation electrospray ionization (LAESI) is an atmospheric-pressure ion source for mass spectrometry. In the imaging mode, a mid-infrared laser probes the distributions of molecules across a tissue section or a biofilm. This technique presents a new approach for diverse bioanalytical studies carried out under native experimental conditions.

Ambient ionization methods in mass spectrometry allow analytical investigations to be performed directly on a tissue or biofilm under native-like experimental conditions. Laser ablation electrospray ionization (LAESI) is one such development and is particularly well-suited for the investigation of water-containing specimens. LAESI utilizes a mid-infrared laser beam (2.94 μm wavelength) to excite the water molecules of the sample. When the ablation fluence threshold is exceeded, the sample material is expelled in the form of particulate matter and these projectiles travel to tens of millimeters above the sample surface. In LAESI, this ablation plume is intercepted by highly charged droplets to capture a fraction of the ejected sample material and convert its chemical constituents into gas-phase ions. A mass spectrometer equipped with an atmospheric-pressure ion source interface is employed to analyze and record the composition of the released ions originating from the probed area (pixel) of the sample. A systematic interrogation over an array of pixels opens a way for molecular imaging in the microprobe analysis mode. A unique aspect of LAESI mass spectrometric imaging is depth profiling that, in combination with lateral imaging, enables three-dimensional (3D) molecular imaging. With current lateral and depth resolutions of ~100 μm and ~40 μm, respectively, LAESI mass spectrometric imaging helps to explore the molecular structure of biological tissues. Herein, we review the major elements of a LAESI system and provide guidelines for a successful imaging experiment.

The following protocol describes the major steps of the laser ablation electrospray ionization (LAESI) experiment and provides representative examples for lateral and three-dimensional (3D) imaging for animal and plant tissue samples. Additional experimental and technical details can be obtained from elsewhere.1-6

2. Optimization of the LAESI Ion Source

The LAESI ion source consists of a mid-infrared laser, a series of optical elements for light steering and focusing as well as additional sample holders, cooling components, translation stages, and a solvent delivery system. Figure 1 demonstrates the typical arrangement of these elements with respect to the entrance of the atmospheric-pressure ion source of a mass spectrometer.

In the imaging experiment, the tissue sample is moved in the focal plane of the laser in X and Y directions with step sizes larger than or equal to the dimensions of the ablation spot. The spatial resolution is limited by the focusing of the incident laser beam.

Figure 2 gives representative results for some major tissue types and imaging modalities. Panel A depicts a case for an animal tissue section that has been frozen during the experiment to prevent dehydration.1 In addition, the sample was located in a dry nitrogen gas environment to avoid ambient water vapors from condensing on the sample surface. A 100-μm-thick coronal section of a rat brain (Rattus norvegicus) was laterally imaged with LAESI. The anatomical regions of the brain (see optical image in panel A) show good correlation with the molecular image obtained for the plasmalogens PC(O-33:3) and/or PE(O-36:3) with m/z 728.559.

Panel B shows the 3D LAESI imaging of a Zebra plant (Aphelandra squarrosa) leaf tissue. Because leaves possess a natural defense mechanism against dehydration, the sample could be interrogated in the ambient environment.3 The obtained 3D molecular images revealed a variety of distribution patterns for primary and secondary metabolites. Among others, acacetin with m/z 285.076 was detected at higher ion counts in the yellow sectors of the second and third layers from the top with a homogeneous distribution in the others. This distribution agreed with the pattern of the variegation seen in the optical image. 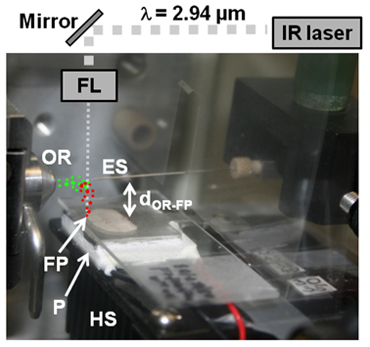 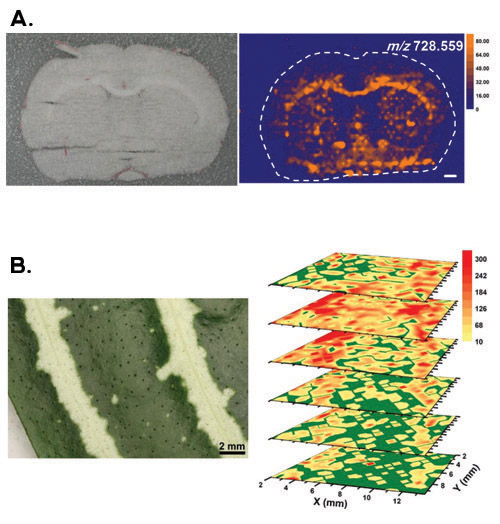 Figure 2. Representative results for lateral and 3D imaging with LAESI mass spectrometry. (A) The top panel depicts the optical image of a rat brain (Rattus norvegicus) coronal section and the molecular image obtained for the plasmalogens PC(O-33:3) and/or PE(O-36:3) with m/z 728.559. The white scale bar corresponds to 1 mm. Adapted with permission from (Reference 1). Copyright 2010 American Chemical Society. (B) The bottom panel shows the 3D imaging of a leaf from a variegated Zebra plant (Aphelandra squarrosa). Acacetin with m/z 285.076 was detected at higher ion counts in the yellow sectors of the second and third layers from the top with a homogeneous distribution in the others. Reprinted with permission from (Reference 3). Copyright 2009 American Chemical Society.

Different tissue types exhibit varying water content and tensile strength, which, in turn, can affect the ablation characteristics of the samples.9 To mitigate these effects, it is desired that the laser fluence, sample handling, and analysis protocols be revised when changing between major tissue types.

For single cell or higher resolution investigations, the mid-infrared light can be coupled into a sharpened optical fiber instead of a focusing lens.10 By positioning the fiber tip within close proximity of the selected cells in a tissue, LAESI analysis can be performed on a single-cell level.

As a label-free ion source for ambient ionization mass spectrometry,11 LAESI has shown great potential for the investigation of biochemical processes in tissues. With the added benefits of direct analysis, lateral and 3D imaging, LAESI is an emerging bioanalytical tool for profiling as well as imaging applications.

The authors are grateful for the financial support of this work by the U.S. National Science Foundation under Grant No. 0719232, by the U.S. Department of Energy (DEFG02-01ER15129), and by Protea Biosciences, Inc. (Morgantown, WV). The authors would also like to thank Jessica A. Stolee for her help during the videotaping of the protocol.