This article describes a technique for the visualization of the early events of embryogenesis in the nematode Caenorhabditis elegans.

Caenorhabditis elegans has often been used as a model system in studies of early developmental processes. The transparency of the embryos, the genetic resources, and the relative ease of transformation are qualities that make C. elegans an excellent model for early embryogenesis. Laser-based confocal microscopy and fluorescently labeled tags allow researchers to follow specific cellular structures and proteins in the developing embryo. For example, one can follow specific organelles, such as lysosomes or mitochondria, using fluorescently labeled dyes. These dyes can be delivered to the early embryo by means of microinjection into the adult gonad. Also, the localization of specific proteins can be followed using fluorescent protein tags. Examples are presented here demonstrating the use of a fluorescent lysosomal dye as well as fluorescently tagged histone and ubiquitin proteins. The labeled histone is used to visualize the DNA and thus identify the stage of the cell cycle. GFP-tagged ubiquitin reveals the dynamics of ubiquitinated vesicles in the early embryo. Observations of labeled lysosomes and GFP:: ubiquitin can be used to determine if there is colocalization between ubiquitinated vesicles and lysosomes. A technique for the microinjection of the lysosomal dye is presented. Techniques for generating transgenenic strains are presented elsewhere (1, 2). For imaging, embryos are cut out of adult hermaphrodite nematodes and mounted onto 2% agarose pads followed by time-lapse microscopy on a standard laser scanning confocal microscope or a spinning disk confocal microscope. This methodology provides for the high resolution visualization of early embryogenesis.

If it is desirable to view structures such as lysosomes or mitochondria, adults can be injected with fluorescent dye prior to visualization. 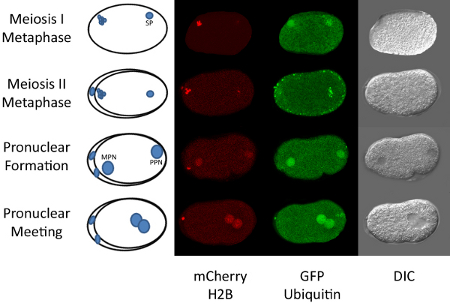 Supplemental Video 1. Time-lapse video of GFP:ubiquitin plus Lysotracker Blue in a meiotic embryo. Click here to view the video.

After fusion with the sperm, the zygote undergoes a series of dynamic events. These events transform the oocyte from a relatively static cell into the rapidly developing embryo. In many organisms, cytoplasmic rearrangements are critical for establishing embryonic polarity and for egg activation. The C. elegans embryo provides an excellent opportunity for observing these early events of egg activation and embryogenesis. The embryo is transparent and early developmental events occur relatively rapidly after fertilization. C. elegans researchers have generated many useful transgenic strains that express fluorescently labeled proteins involved in early development. Using these strains along with RNAi or mutants provides a powerful system for dissecting the molecular pathways that underlie development of a multicellular organism (5, 6, 7, 8). This video article presents a practical approach to using these tools and techniques to record events during early embryogenesis in C. elegans.

The mature C. elegans oocyte is arrested in prophase of meiosis I and is fertilized in the spermatheca of the adult hermaphrodite. After fertilization, the oocyte proceeds through the remainder of meiosis I and II. These stages can be observed using fluorescently labeled histone H2B (5). During completion of maternal meiosis, the sperm DNA remains condensed (see Figure 1). After the completion of meiosis, the maternal and paternal DNA becomes decondensed and the two pronuclei form. The maternal pronucleus migrates towards the paternal pronucleus and they join together near the center of the embryo. Mitosis quickly ensues after pronuclear meeting. All of these events occur in less than an hour. Thus, time-lapse microscopy of this sequence of events can be readily accomplished. Performing this technique requires certain facility in nematode culturing as well as basic microscopy skills in addition to access to a confocal microscope.

The example presented here utilizes a transgenic C. elegans strain that expresses two fluorescent proteins, GFP::ubiquitin and mCherry::H2B. A confocal laser scanning microscope is used to observe the dynamic localization of these two proteins. In addition, we show that injection of fluorescently labeled Lysotracker can be used to follow the fate of lysosomes in the embryo after fertilization. Injection of a labeled tracker can also be performed for visualization of mitochondria or local calcium concentrations (9). In theory, the injection protocol could be used to view any type of fluorescently labeled molecule in the embryo. This might include labeled small molecules, proteins, lipids, etc. In some cases, it may not be necessary to actually inject labeled trackers as the worms will readily uptake some dyes such as mitotracker (10). However, we have tried both soaking and injection of lysotracker and have found much better results with injection for visualization in embryos.

The technical challenges presented with this procedure include the microinjection technique as well as the difficulty in imaging very early embryos. Regarding microinjections, the thickness of the agarose injection pad is critical for successful injections. If the pad is too thick, the worms will dessicate and die quickly. If the pad is too thin, the worms will not stick to the pad during the injection process.

The early embryos can be sensitive to environmental conditions such as temperature and buffer conditions. Wild type embryos should initiate decondensation of the sperm DNA and pronuclear migration within a minute or so of completing meiosis II (4). Within 20 minutes, the first cytokinesis should begin. If embryos are exposed to very high laser intensity or are overheated or crushed during mounting, this process may be disrupted. Such embryos will arrest development. If this occurs, the experiment should be repeated with decreased laser power or a thicker agarose pad.

C. elegans embryos do not secrete their egg shell until shortly after fertilization. During the short time between fertilization and the secretion of the egg shell, embryos are not viable outside of the mother (11). Some labs have avoided this challenge by imaging embryos in utero (5, 12). In utero imaging offers certain advantages such as the ability to capture events that occur during or just after fertilization. However, this technique requires the use of a microscopy system that allows for deep tissue imaging. Systems such as two-photon or multi-photon are especially suited for this (13, 14). When using a conventional laser-scanning or spinning disk confocal microscope, the best images are obtained from embryos that have been cut out of the adult worm as described here.

The type of confocal imaging system used depends upon the users' needs. In general, laser scanning systems are recommended if one wishes to acquire images with the highest resolution possible. On the other hand, spinning disk systems are better suited for imaging highly dynamic processes as image acquisition is relatively rapid and photobleaching/phototoxicity is reduced.

The specific imaging parameters will vary depending upon the experimental design and the confocal imaging system employed. In multidimensional imaging, one needs to consider the number of channels, focal planes, and time-points being collected. Due to the limiting effects of photobleaching and phototoxicity, a finite number of images can be acquired in any given experiment. Thus, if you choose to increase the number of channels to be acquired, you will likely need to reduce the number of focal planes and/or time points and vice versa. The total number of images that can be acquired will be influenced by the intensity of the fluorophore being imaged as well as the sensitivity of the confocal microscope being used. More intense fluorophores and more sensitive instruments will require shorter exposure times and thus produce less photobleaching and phototoxicity.

A large number or imaging systems are available. We will give details on the systems that have been used in our own laboratories. For imaging worm embryos by spinning disk confocal microscopy, we use a Nikon TE2000U inverted microscope equipped with a 60X/1.4 N.A. Plan Apo objective. The microscope is connected to a Yokogawa CSU10 spinning disk unit, a Hamamatsu C9100-13 EM CCD camera, and a Spectral Applied Research LMM5 laser merge module containing four solid state lasers with output at 405, 491, 561 and 655 nm. Using this system we can capture one or two channels, six to twelve focal planes, and 25 to 50 timepoints (at 30 to 60 second intervals). A typical exposure time is 100 to 200 milliseconds.

For imaging embryos with laser scanning confocal microscopy, we use a Zeiss LSM700 equipped with 2 channels and four solid state lasers (405, 488, 555, and 635 nm). This system is attached to a Zeiss Axio Observer inverted microscope with a Plan-Apo 63X/1.4NA objective used for embryo imaging. The system uses the Zeiss ZEN software for image acquisition which also provides limited image processing and analysis. When imaging with two fluorochromes, we typically gather 1-5 focal planes (~0.5 μm apart) and collect a Z stack every 15 seconds. Collections are continued until significant photobleaching has occurred. To generate the final time-lapse video, Z stack images are consolidated using the maximum projection tool in the ZEN software. Videos are exported from the software as avi files.