Mycobacterium tuberculosis, the etiologic agent of human tuberculosis, has an extraordinary ability to survive against environmental stresses including antibiotics. Although stress tolerance of M. tuberculosis is one of the likely contributors to the 6-month long chemotherapy of tuberculosis 1, the molecular mechanisms underlying this characteristic phenotype of the pathogen remain unclear. Many microbial species have evolved to survive in stressful environments by self-assembling in highly organized, surface attached, and matrix encapsulated structures called biofilms 2-4. Growth in communities appears to be a preferred survival strategy of microbes, and is achieved through genetic components that regulate surface attachment, intercellular communications, and synthesis of extracellular polymeric substances (EPS) 5,6. The tolerance to environmental stress is likely facilitated by EPS, and perhaps by the physiological adaptation of individual bacilli to heterogeneous microenvironments within the complex architecture of biofilms 7.

In a series of recent papers we established that M. tuberculosis and Mycobacterium smegmatis have a strong propensity to grow in organized multicellular structures, called biofilms, which can tolerate more than 50 times the minimal inhibitory concentrations of the anti-tuberculosis drugs isoniazid and rifampicin 8-10. M. tuberculosis, however, intriguingly requires specific conditions to form mature biofilms, in particular 9:1 ratio of headspace: media as well as limited exchange of air with the atmosphere 9. Requirements of specialized environmental conditions could possibly be linked to the fact that M. tuberculosis is an obligate human pathogen and thus has adapted to tissue environments. In this publication we demonstrate methods for culturing M. tuberculosis biofilms in a bottle and a 12-well plate format, which is convenient for bacteriological as well as genetic studies. We have described the protocol for an attenuated strain of M. tuberculosis, mc27000, with deletion in the two loci, panCD and RD1, that are critical for in vivo growth of the pathogen 9. This strain can be safely used in a BSL-2 containment for understanding the basic biology of the tuberculosis pathogen thus avoiding the requirement of an expensive BSL-3 facility. The method can be extended, with appropriate modification in media, to grow biofilm of other culturable mycobacterial species.

Note: This is a standard composition of Sauton's media used for M. tuberculosis. However, if required other specialized media can also be used for other mycobacterial species.

Note: The volume of the media beneath the pellicles reduces to about 3.0mL. So investigators should accordingly calculate the amount of drug.

Note: Although low temperature was originally developed for M. smegmatis (to minimize its growth during dispersion) and used for M. tuberculosis as well, the slow growing species can most likely be rocked at room temperature without any impact on result. Rocking at room temperature could be necessary if working in BSL-3 facility.

In the 12-well format, a robust biofilm at the air-media interface is seen in each of the wells at the end of five weeks (Fig 2A). If the plates are not wrapped completely then differential biofilm growth is observed. In the worst case, significant media evaporation can stall the growth of the bacteria (Fig 2B). Thus, wrapping of the plate is necessary both to prevent the evaporation as well as to provide environment for biofilm formation (see previous paragraph).

The number of viable bacilli in biofilms determined with this technique is quite reproducible. Response of M. tuberculosis biofilms varies with the nature of the antibiotics. For a bactericidal antibiotic such as rifampicin, loss of viability follows a biphasic trend 9. A rapid decline in the viability during the first three to four days followed by a persistent phase in which a small percentage of the population remain completely recalcitrant to antibiotics irrespective of the concentration of the antibiotic or the time of exposure. Figure 3 shows the number of viable bacilli in mature biofilms after a 7-day exposure to 50μg/mL (50 times higher than the MIC) of rifampicin. 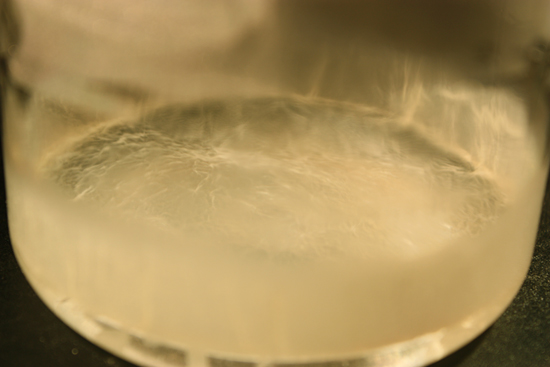 Figure 1A. Early appearance of M. tuberculosis bacilli on the air-media interface of bacteria after 3 weeks of incubation. 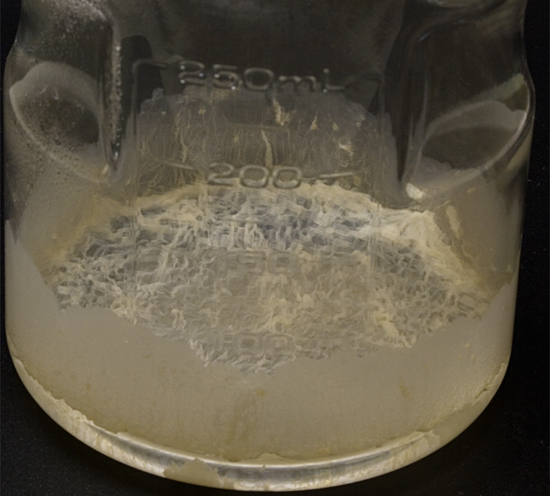 Figure 1B. Matured biofilms of M. tuberculosis on the air-media interface after five weeks of incubation. 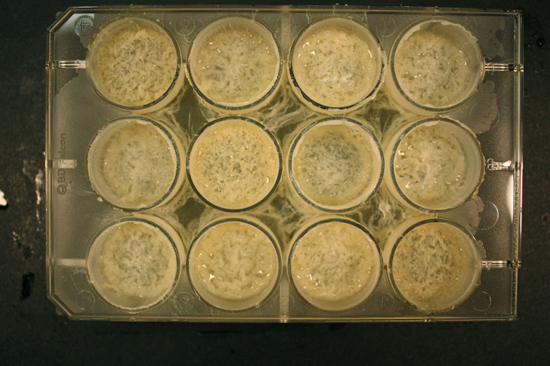 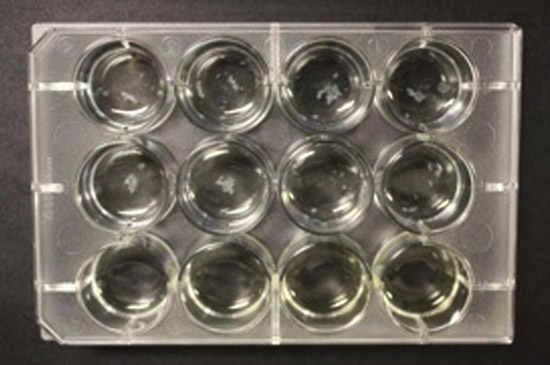 Figure 2B. A failed attempt to grow M. tuberculosis biofilms in 12-well plate without parafilm. 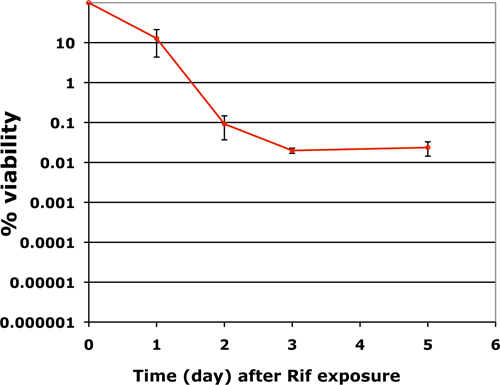 Figure 3. A representative plot showing the frequency of drug tolerant persisters in M. tuberculosis biofilms grown in 12-well format and exposed to 50μg/mL of Rifampicin for seven days.

Tuberculosis (TB), caused by the infection of Mycobacterium tuberculosis, remains a major threat to the global public health. Nearly one third of the world's population is estimated to be asymptomatically infected by the pathogen, about 9 million new cases show up in clinic every year with symptoms of active TB and about 1.7 million die of the infection every year 11. The huge burden of the disease is primarily contributed by lack of a vaccine and a highly complicated chemotherapy that involves a multidrug regimen administered over six to nine months. The prolonged chemotherapy is largely attributed to phenotypic tolerance of a small subpopulation of the pathogen that required extended exposure of antibiotics 12. While targeting these persisters is critical for short and effective treatment of tuberculosis, the mechanisms underlying the development of these persisters remain unclear.

Most microbial species in their natural habitat spontaneously grow in self-assembled, surface attached multicellular communities called biofilms, which are highly tolerant to antibiotics3. Recently, it has been shown that several mycobacterial species, have strong propensity to grow in vitro as biofilms, which provide a microenvironment that promote development of drug tolerant persisters 9,13-15. While fast growing environmental species such as M. smegmatis can readily form biofilms in detergent-free media, the slow growing pathogenic species M. tuberculosis require specific conditions to form the multicellular structures 9. Since culturing M. tuberculosis in biofilms could provide significant insight into the mechanisms of drug tolerance and persistence, dissemination of a detailed protocol for culturing the pathogen in biofilms through an open source will be valuable for tuberculosis research, particularly in a resource-limited country.

Here we describe the method of growing M. tuberculosis in biofilms in detail. We also provide a protocol to break the biofilms and determine the number of viable bacilli in the population. This technique can be used to determine the number of drug tolerant persisters in the culture. The three most critical steps in culturing biofilms are: 1) choice of an appropriate detergent-free media , closed culture container during first three weeks, and open container for subsequent incubation. Furthermore, keeping the container in a humidified condition is also critical to prevent evaporation of media during 5-week incubation. This can significantly hamper the reproducibility of the results.

The work was carried out with financial support from the National Institute of Health and American Lung Association.