Skip to content
Trial ends in Request Full Access Tell Your Colleague About Jove
JoVE Journal
Medicine
This is a sample clip. Sign in or start your free trial.
Medicine
Author Produced
CITE THIS  SHARE

This surgical technique illustrates the injection of gene therapy vectors and stem cells into the subretinal space of the mouse eye.

1. Assemble Devices for the Subretinal Injection

A drawing of the mouse eye is shown with major structures labeled for reference, with arrows displaying the locations for both intravitreal and subretinal injection surgical procedures (arrowheads, Figure 1). Gene therapy vectors, such as the lacZ lentiviral vector (Figure 2), can be injected using these locations. Additionally, stem cells, such as mouse embryonic stem cells (Figure 3), can also be transplanted at these sites in the mouse eye.

1 μl of a lentiviral vector carrying the lacZ reporter gene driven by the cytomegalovirus (CMV) promoter (1x108 TU/ml, Lentigen Corporation, Figure 2A) was injected into the subretinal space of C57BL/6J mice. Eyes were enucleated at six weeks of age by blunt dissection and immersed in 1 mg/ml X-gal solution (5mM K3Fe(CN)6, 2 mM MgCl2, 0.02% NP40, and 0.1% sodium deoxycholate) overnight at 37 °C. Eyes were fixed in 2% formaldehyde/0.2% glutaraldehyde for 30 min and sectioned on a microtome. LacZ reporter gene expression was detected as X-gal product (blue) in approximately 10% of photoreceptor cells (Figure 2B). The intracellular presence of lacZ expression and the intact surrounding tissues indicate the successful subretinal injection in the mouse eye.

C57BL/6J mouse embryonic stem (ES) cells were labeled with a green fluorescent protein (eGFP, Wellcome Trust Sanger Institute). These cells were then collected and suspended in sterile phosphate-buffered saline and transplanted into the subretinal space of post-natal day (P)5 C57BL/6J mice, with approximately 1x105 cells injected per 1 μl. Eyes were enucleated at two weeks of age by blunt dissection, fixed in a sucrose gradient and frozen in O.C.T. embedding medium (Tissue-Tek). Eyes were sectioned and visualized under fluorescence microscopy (Zeiss). The presence of GFP-labeled ES cells can be found within the subretinal space of the injected mouse eye (Figure 3A). Additionally, C57BL/6J-Tyrc-2j/J (C2J) mouse embryonic stem (ES) cells were electroporated with yellow fluorescent protein (YFP) and differentiated into retinal pigment epithelial (RPE) cells in vitro. After one month of differentiation, the YFP-labeled RPE-like C2J ES cells were suspended in sterile phosphate-buffered saline and injected into the subretinal space of P5 C57BL/6J mice. At 15 weeks of age, a mouse was visualized using live-imaging autofluorescence for the presence of YFP within the retina (Spectralis Scanning Laser Confocal Ophthalmoscope, Heidelberg Engineering, Figure 3B). 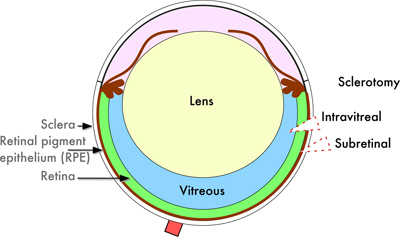 Figure 1. Schematic of the Mouse Eye. A cartoon drawing depicting the structures of the mouse eye with sites for both intravitreal and subretinal injection procedures marked (arrowheads). 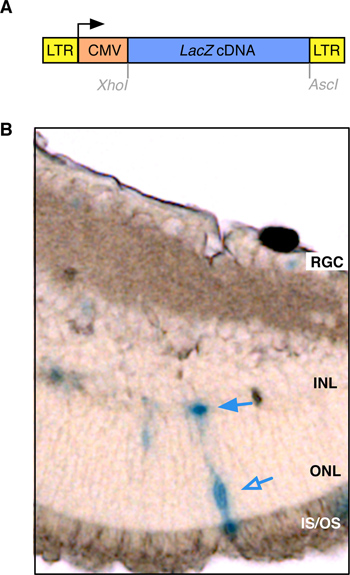 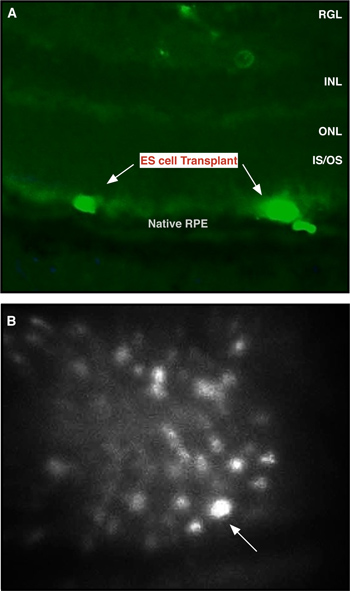 This video technique provides instructions on completing the subretinal injection surgical procedure successfully, and ensuring that the gene therapy vector or stem cells are placed in the location necessary to efficiently treat the ophthalmic disease. This technique allows for the targeting of retinal cells such as the RPE or photoreceptors, since it places the gene therapy vectors or stem cell-derived tissues in the vicinity of these cells. Previous methods involved intravitreal injections, where the fluid is placed within the vitreous cavity and must migrate through the retina in order to target these specific areas. Intravitreal injection reduces the transduction of gene therapy vectors that target photoreceptors or the RPE, since not all viral particles will migrate into the correct location. Furthermore, stem cells are becoming increasingly popular to replace diseased RPE or photoreceptors, and these differentiated cells must be transplanted within the subretinal space. 5

The critical step in this procedure is entry into the subretinal space, since this ensures the correct location of gene therapy vectors or stem cell-derived tissues in order to have therapeutic efficacy, along with reducing the potential for retinal detachment or damage to the surrounding eye tissue. Care must be taken to troubleshoot ahead of time; to be able to locate and inject the fluid into the subretinal space. This can be done through practice using colored dye and albino mice, as shown in the video, since the injection needle will not be visible within the eye of pigmented mice. After practice, the researcher will learn to feel the difference in pressure when the fluid is correctly placed within the subretinal space and be comfortable with the surgical procedure to complete it in a timely manner.

There are some potential modifications for this surgical procedure. These injections can be performed on mice of different ages, although the amount of gene therapy vectors or stem cell-derived tissues injected could vary depending on the age of the mouse. Care should be taken to determine how much fluid will promote treatment for the ophthalmic disease, but not prolong detachment and damage to the retina. The pulled capillary needle can be modified to have different diameters. Smaller needles are sufficient for viral injections, but larger diameters may be better for cellular transplantation. In addition, the surgery can be performed on adult mice. The eye tissue density will be much greater, so fresh, sharp surgical blades are required to penetrate into the subretinal space. In all cases, modifications can be made based on this protocol to complete a successful subretinal injection of a gene therapy vector or stem cell-derived tissue.

All subretinal injections will cause a temporary retinal detachment due to the presence of the injected fluid within the subretinal space, but this detachment should heal within 24 hours of the surgical procedure. Mice can be carefully checked under a microscope for any remaining detachment. It is possible that some mice may not heal naturally even after a well-placed injection. All mice are able to undergo examination and experiments following this 24-hour time-period, however the eye may be soft due to a change in pressure from the injection procedure for up to one week. Therefore, one limitation of this technique is the ability to perform secondary injections during the first postoperative week. Another injection may not be possible during the immediate postoperative period, since the incidence of retinal detachment that does not heal after surgery is increased. It is advised to wait for a longer duration of time, as long as one month, before re-injecting the mouse eye.

The mouse has become an important model organism to study ophthalmic disease and potential therapies that will lead to human clinical trials.9-12 A second limitation of this procedure is that not all cells are transfected with DNA vectors following subretinal injection, as they would be in a transgenic mouse model. However, this procedure may more closely approximate a clinical procedure in humans where not every cell is transfected. Thus, this technique can help to establish the feasibility for gene therapy viral vectors or stem cell-derived tissue transplantation therapy to treat age-related macular degeneration and other vitreoretinal diseases in humans. Future applications can include the use of different retinal cell promoters and differentiated stem cells, or even multiple injections using a combination of treatments.