This protocol describes how to stimulate cells with mitochondrial-derived peptides and assess the signaling cascade and localization of phospho-proteins.

Mitochondrial-derived peptides (MDPs) are a new class of peptides that are encoded by small open reading frames within other known genes of the mitochondrial genome. MDPs have a wide variety of biological effects such as protecting neurons from apoptosis, improving metabolic markers, and protecting cells from chemotherapy. Humanin was the first MDP to be discovered and is the most studied peptide among the MDP family. The membrane receptors and downstream signaling pathways of humanin have been carefully characterized. Additional MDPs such as MOTS-c and SHLP1-6 have been more recently discovered and the signaling mechanisms have yet to be elucidated. Here we describe a cell culture based method to determine the function of these peptides. In particular, cell fractionation techniques in combination with western blotting allow for the quantitative determination of activation and translocation of important signaling molecule. While there are other methods of cell fractionation, the one described here is an easy and straightforward method. These methods can be used to further elucidate the mechanism of action of these peptides and other therapeutic agents.

Emerging studies show that mitochondrial-derived peptides (MDPs) play important roles in cytoprotection and metabolism1,2,3. Understanding the signal transduction pathway in the presence of MDPs gives us insight into the mechanism by which MDPs modulate various functions. The first identified MDP, humanin, has been shown to increase extracellular signal-regulated kinase 1/2 (ERK1/2) phosphorylation through its receptor binding4,5. However, the downstream effect of ERK1/2 activation is still underexplored.

The ERK1/2 cascade serves as an essential mediator in a variety of cellular processes including proliferation, cell migration, cellular metabolism, survival, and apoptosis6,7,8. To orchestrate all these distinct cellular processes, the activity and subcellular localization of ERK1/2 are tightly regulated by phosphatases and scaffold proteins9,10. In addition to post-translational modification, the dynamic shuttling of ERK1/2 also regulates its signaling function, activity, and specificity11,12. ERK1/2 is primarily localized in the cytosol13. A set of anchoring and scaffold proteins help retain ERK1/2 in cytoskeletal elements, on the surface of organelles, or diffused in the cytoplasm13. Upon stimulation, ERK1/2 is phosphorylated and becomes dissociated from its anchoring proteins, allowing the translocation of ERK1/2 to other subcellular compartments, including the nucleus, mitochondria, Golgi, and lysosomes14,15,16.

Although humanin is known to activate the ERK1/2 signaling pathway, the activation of ERK1/2 is only observed in the total cell lysates. As described previously, since ERK1/2 subcellular localization plays a crucial role in its downstream effect, the analysis of both the subcellular localization and the total levels of phosphorylated ERK1/2 is necessary to provide a comprehensive understanding of humanin-induced ERK1/2 activation and the activation of downstream targets.

The versatility of the method enables modifications of the protocol to investigate effects of other stimulants including other MDPs or translocation of other signaling molecules such as STAT3. Recently discovered small humanin-like peptides (SHLPs) are encoded from 16S rRNA region where humanin is encoded, and they have similar but distinct properties compared to HN17. For example, SHLP2 and SHLP3 activate ERK1/2 after 8 h although humanin activates ERK1/2 within 5 min. Examining subcellular localization of ERK1/2 in response to different peptides will give us a better understanding of the biology of these peptides. Emerging evidence showed that the subcellular localization of signaling molecules plays a crucial role in their downstream effects. For instance, STAT3 traditionally is known to be primarily localized in the cytosol in resting cells, and then it translocates into the nucleus to activate gene expression in response to cytokines18. STAT3 also translocates to mitochondria and regulates the TCA cycle and ATP production19. Regarding autophagy regulation, different subcellular localization of STAT3 modulates autophagy in various ways20. For example, nuclear STAT3 transcriptionally regulates autophagy-related genes and acts as an autophagy modulator. Cytoplasmic STAT3 constitutively inhibits autophagy by interacting with autophagy signaling molecules. Mitochondrial STAT3 inhibits and prevents mitophagy by suppressing oxidative stress induced autophagy. Therefore, this subcellular compartment isolation method is crucial for understanding the role of other signaling molecules as well as ERK1/2.

2. Subcellular Fractionation for Cytosol and Nucleus

Figure 1: S14G-humanin increases the phosphorylation of ERK1/2 in HEK293 and SH-SY5Y cells. Quantification and representative western blots of ERK activation in (A) HEK293 and (B) SH-SY5Y cells. Total cell lysates following (A) 1 µM or (B) 100 µM S14G-humanin treatment in DMEM supplemented with 10% FBS for the indicated time periods were immunoblotted using anti-phospho- and total-ERK 1/2 (Thr202/Tyr204). This figure has been modified from Kim et al.4 Please click here to view a larger version of this figure. 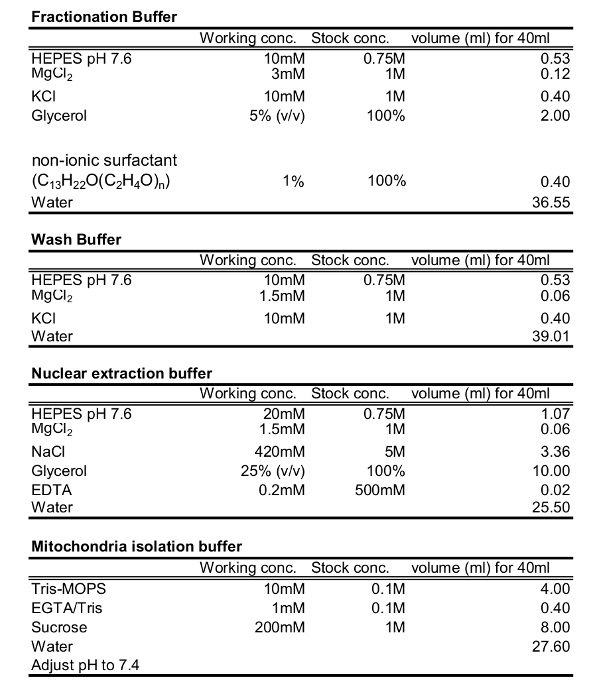 Here, we demonstrated that humanin peptide-mediated ERK1/2 activation occurs in two different cell types, and the subcellular localization of activated ERK1/2 can be different depending on the conditions (e.g., dose of peptide, time point, and cell type). It has been shown that humanin signals through two different receptors22,23, which may explain the differences in signaling between the two cell lines as well as the requirement for different doses of humanin. The physiological implications of this have not been fully studied but it may suggest one possible mechanism for tissue dependent responses to HN.

Phosphorylation of ERK1/2 plays a crucial role in ERK1/2 signaling and the phosphorylation status of ERK1/2 shows dynamic changes. It is important to optimize the conditions to find when ERK1/2 is phosphorylated under a specific condition/stimulus. To achieve this, try different stimulation conditions (e.g., dose and medium) and conduct time courses to find when the highest level of phosphorylation is achieved. A majority of studies have only focused on ERK1/2 phosphorylation in total cell lysates. However, the results may provide limited functional information as ERK1/2 can interact with different targets and modulate different downstream cascades in specific subcellular compartments. Therefore, examining the subcellular localization of phosphorylated ERK1/2 gives a better understanding of the role of ERK1/2 activation.

Subcellular fractionation after ERK1/2 activation can be used as a source of further study (e.g., co-immunoprecipitation) to identify novel downstream targets because the subcellular fractionation can enrich for downstream targets of ERK1/2. This method can be applied to other signaling molecules that are translocated into different subcellular compartments upon stimuli after optimization of the conditions.

Although various methods to isolate mitochondria have been proposed in the past decades, there is partial contamination from other subcellular compartments. The crude mitochondrial isolation method proposed here also contains limited amount of cytoplasm contaminants. As the amount of contamination is small, we consider that it is still a valid method for detecting the localization of ERK1/2 into mitochondria upon activation. As peptides are not necessarily stable in solution, it is sometimes difficult to maintain consistency between experiments. Be sure to make small aliquots of peptide solution to avoid freeze-thaw effects and to improve the consistency of peptide activity.