Measurement of rodent skeletal muscle contractile function is a useful tool that can be used to track disease progression as well as efficacy of therapeutic intervention. We describe here the non-invasive, in vivo assessment of the dorsiflexor muscles that can be repeated over time in the same mouse.

Assessment of skeletal muscle contractile function is an important measurement for both clinical and research purposes. Numerous conditions can negatively affect skeletal muscle. This can result in a loss of muscle mass (atrophy) and/or loss of muscle quality (reduced force per unit of muscle mass), both of which are prevalent in chronic disease, muscle-specific disease, immobilization, and aging (sarcopenia). Skeletal muscle function in animals can be evaluated by a range of different tests. All tests have limitations related to the physiological testing environment, and the selection of a specific test often depends on the nature of the experiments. Here, we describe an in vivo, non-invasive technique involving a helpful and easy assessment of force frequency-curve (FFC) in mice that can be performed on the same animal over time. This permits monitoring of disease progression and/or efficacy of a potential therapeutic treatment.

Skeletal muscle is an important metabolic tissue that comprises approximately 40% of the total body weight. It plays a crucial role in the control of energy metabolism and homeostasis1. Skeletal muscle mass is maintained by a fine balance between the rates of protein synthesis and degradation1. Numerous disease conditions affect these processes in skeletal muscle, leading to a net loss in muscle mass (atrophy). These include, but are not limited to, cancer, AIDS, aging, fasting, and limb immobilization2,3. In the aging population, loss of strength is associated with a loss of muscle mass and is a predictor of all-case mortality4. In this context, assessment of muscle function provides an important measure when determining the efficacy of therapeutic strategies to combat and/or prevent skeletal muscle wasting and loss of function.

Skeletal muscle function, especially in small rodents, is typically performed using three well-described procedures8,9 to detect impaired force production and/or monitor disease progression. (1) Ex vivo; where muscle is removed from the animal and incubated in a Ringer's bath solution to assess the muscle function using field stimulation10. (2) In situ; where the proximal attachment of the muscle remains in the animal and the distal tendon is connected to a force transducer, allowing muscle function to be performed by direct nerve stimulation11. (3) In vivo; where electrodes are placed subcutaneously to obtain nerve-evoked muscle force production9,12. While these three procedures are used for different purposes, they each possess advantages and disadvantages. Therefore, it is important to select an appropriate method based on the aim of the study. The main limitation with ex vivo experiments is the removal of muscle from its normal environment and the use of field stimulation. The in situ method maintains a normal blood supply and uses stimulation through the nerve, but normal anatomy is altered and the nature of the experiment is terminal; thus, this makes follow-up muscle function measurements impossible. The in vivo method described here most closely mimics normal physiology in that the anatomy is undisturbed, the neuromuscular bundle remains intact, and the experiment is not terminal, allowing follow-up measures within the same animal over time8.

Here, we describe an in vivo procedure that allows multiple measurements of muscle function in the same animal over time. This procedure involves the assessment of muscles of the anterior crural compartment — including the tibialis anterior(TA), extensor digitorum longus (EDL), and extensor hallicus longus (EHL) muscles, responsible for dorsiflexion — in a non-invasive procedure by fibular (also known as peroneal) nerve stimulation. The TA provides most of the force for ankle dorsiflexion13, with only minimal contribution by the EDL and EHL that control movement of the toes. This non-terminal protocol ensures the preservation of nerve and blood supply. This allows for the investigation of disease evolution and treatment efficacy over time in the most physiological environment currently available in an animal model.

NOTE: All force measurements were performed on male wild-type mice (C57BI/6) at 12 weeks of age.

4. Optimization of the Electrodes Position

The force-frequency curve is a useful test in which muscles can be stimulated by lower and higher frequencies to distinguish suboptimal and optimal force responses15. The force at lower frequencies can stimulate a single twitch, activating fewer and smaller motor units, and at higher frequencies a stable peak is reached, where isolated twitches fused (tetanus), reaching maximum force through activating all motor units16. In the test presented, the tetanic curve starts at ~60 Hz, where the potentiation can be visualized (Figure 4A) and the maximum force is determined at ~150 Hz (Figure 4B), when the plateau is reached with a completed fused curve9,16.

Any variation of these results may indicate that the muscles are not being properly stimulated by the electrodes. Electrode placement is an important step in the preparation of this procedure, as the electrical stimulation must be correctly positioned to innervate the peroneal nerve and thus fully activate the muscles of dorsiflexion, which it supplies (TA, EDL, and EHL). Correct electrode positioning results in the generation of negative peaks (Figure 3) during this process, whereas misalignment of the electrodes or higher amperage can lead to the stimulation of surrounding muscles, causing co-contraction of the neighboring muscles and antagonist muscles, which in turn generates peaks of positive values.

Figure 5A shows representative force frequency-curve data from a mouse across time, where the procedure was repeated once a week until 5 timepoints were completed. These observations have shown consistent force production values throughout the timepoints and/or observations measured. This procedure has also shown to be consistent between mice measurements, as Figure 5B shows the representative area under the curve of the FFC stimulated over 5 different observations in 6 mice tested once a week. 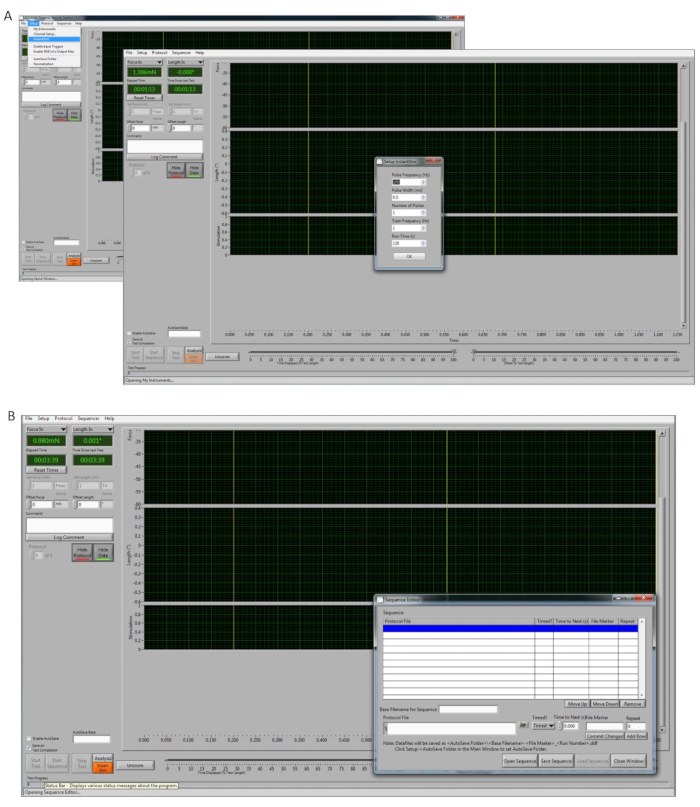 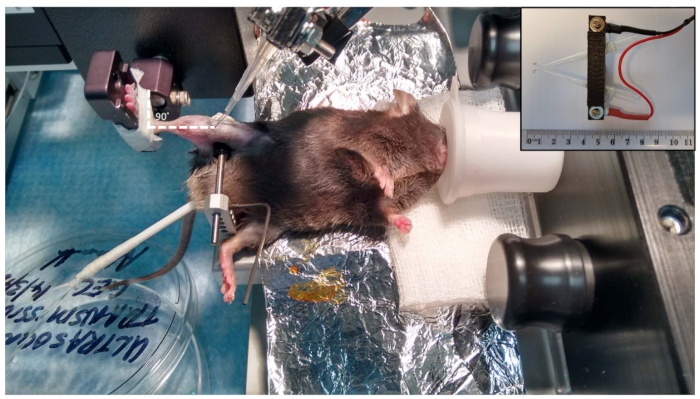 Figure 2: Mouse setup. Overview of the position of the anesthetized animal. The right knee clamp is placed so that the knee is at 90° and so that the foot and the ankle are at 90° angles (dotted white line). Contraction of the dorsiflexors muscles is achieved by stimulation of the peroneal nerve, which is located just under (distal to) the head of the fibula. We use custom-designed electrodes (inset); however, needle electrodes that are provided with the unit, or purchased separately, are also sufficient. Please click here to view a larger version of this figure.

Figure 3: Output from placement of the electrodes. Once the electrodes are positioned under the skin and the voltage is initiated, peaks with negative values are observed. At this point, reaching negative values (green lines) is a crucial step in making sure that the stimulation is achieved in the dorsiflexor muscles only (TA, EDL, and EHL). The real-time measurement is indicated between the two red lines. Please click here to view a larger version of this figure.

Measurement of maximal muscle contractile function in an accurate and repeatable manner is critical to the progressive assessment of genetic, metabolic, and muscle conditions17. Similarly, in vivo muscle contractile function allows for the assessment of novel treatments and therapeutics for debilitating muscle conditions. We demonstrate herein the measurement of force production of the dorsiflexor muscles of mouse lower hindlimb through an in vivo procedure.

Commercial apparatuses are efficient and helpful in performing this non-invasive procedure. This test provides important advantages related to the assessment of muscle contractile function while preserving a native physiological environment, in which blood supply and innervation remain intact. On the other hand, its disadvantages are related to normalization of the force per unit of cross sectional area of muscle (specific force), which can only be ascertained in an isolated muscle that is harvested after experimentation. However, the non-invasive test allows multiple measurements of contractile function of the flexor muscles in the same animal over time, resulting in reduced numbers of experimental animals being required, especially if the goal is to assess relative changes (changes in absolute force over time).

There are important steps that must be considered during this procedure in order to achieve consistent data over the timepoints. First, one should attempt to standardize animal positioning whenever possible. Second, during the setting up it is important to be consistent with electrode positioning so that optimal stimulation can be reached via stimulation of the peroneal nerve. The location of the electrodes should be on the lateral side of the (in this case right) leg, near to the head of the fibula and other further down the lateral side of the leg (Figure 2). Based on this, the custom-made electrodes are designed as such that both can be placed at same position every time. However, sufficient stimulation can also be achieved using the electrode needles provided with the commercial apparatuses. Third, it is crucial to achieve negative peaks during the voltage setup by turning clockwise the transducer connected to the footplate. Correct positioning of the mouse leg electrodes with maximum voltage setup has shown to be a technique that can be performed on the same mouse over time.

The ability to assess and track muscle function at different timepoints on the same animal is an important assessment to characterize different muscle diseases as well as their progression. Furthermore, this measurement of muscle dorsiflexion in mice can be a tool to assess the efficacy of potential treatments in a native physiological environment, with minimum metabolic stress12. Thus, it provides a technique in assessing muscle disease, its progression and potential treatment.

Funding from this project was from the School of Exercise and Nutrition Sciences, Deakin University. The authors would like to thank Mr. Andrew Howarth for his extensive work in optimizing the electrodes device.