We describe a technique for retrograde labeling of motor neurons in Drosophila. We use an oil-dissolved lipophilic dye and deliver a small droplet to an embryonic fillet preparation by a microinjector. Each motor neuron whose membrane is contacted by the droplet can then be rapidly labeled. Individual motor neurons are continuously labeled, enabling fine structural details to be clearly visualized. Given that lipophilic dyes come in various colors, the technique also provides a means to get adjacent neurons labeled in multicolor. This tracing technique is therefore useful for studying neuronal morphogenesis and synaptic connectivity in the motor neuron system of Drosophila.

The embryonic motor neuron system of Drosophila offers a powerful experimental model to analyze the mechanisms underlying the development of the central nervous system (CNS)1,2,3. The motor neuron system is amenable to biochemical, genetic, imaging, and electrophysiological techniques. Using the techniques, genetic manipulations and functional analyses can be carried out at the level of single motor neurons2,4,5,6.

During early development of the nervous system, neuroblasts divide and generate a large number of glia and neurons. The spatiotemporal relationship between the delamination and the gene expression profile of neuroblasts has been previously investigated in detail7,8,9. In the case of the motor neuron system, the formation of embryonic neuromuscular junction (NMJ) has been extensively studied using the aCC (anterior corner cell), RP2 (raw prawn 2), and RP5 motor neurons2,10. For instance, when the RP5 motor neuron forms a nascent synaptic junction, the pre-synaptic and post-synaptic filopodia are intermingled11,12,13. Such direct cellular communication is vital to initiate the NMJ formation. Contrary to what we know about the peripheral nerve branches, our knowledge of how motor dendrites initiate synaptic connectivity within the CNS is still primitive.

In this report, we present a technique that allows retrograde labeling of motor neurons in embryos by means of micropipette-mediated delivery of lipophilic dyes. This technique enables us to trace the 38 motor neurons innervating each of the 30 body wall muscles in a hemi-segment at 15 h after egg laying (AEL)14. By using this technique, our group has thoroughly investigated numerous gain-of-function/loss-of-function alleles15,16,17. We have recently unraveled the molecular mechanisms that drive initiation of motor dendrite connectivity and demonstrated that a Dscam1-Dock-Pak interaction defines the site of dendrite outgrowth in the aCC motor neuron17. In general, this technique is adaptable for the phenotypic analysis of any embryonic motor neurons in wild type or mutant strains, enhancing our ability to provide new insights into the functional design of the Drosophila nervous system.

5. Filling of the Injection Micro-pipette

7. Imaging with a Confocal Microscope

A representative image of the aCC and RP3 motor neurons is shown in Figure 3C to demonstrate the multicolor labeling of motor neurons at 15 h AEL. Their dendritic morphologies are largely invariant between embryos. The staining pattern obtained with anti-HRP antibody is shown in gray. A small droplet of DiO or DiD was deposited on the NMJ of muscle 1 or 6/7, respectively. Figure 4 demonstrates the capability to quantitatively measure the phenotype of intere­st. We counted the total number of dendrite tips in a wild type, compared with a mutant (e.g., dscam1-/-). 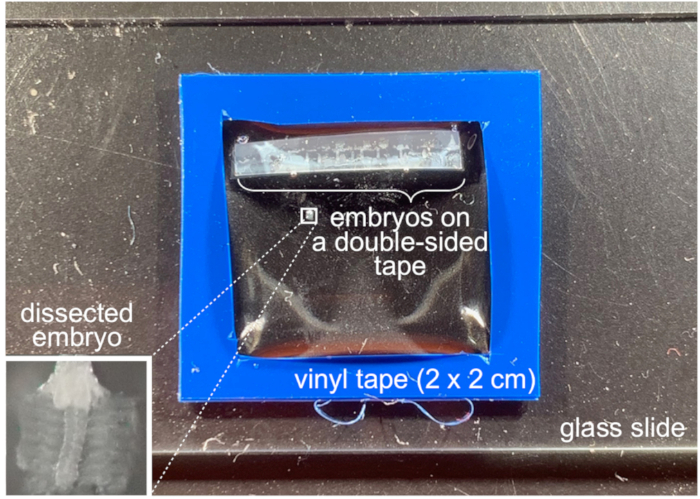 Figure 1: Setup of the dissection pool. The blue chamber seen on the glass slide is created with vinyl tape keeping the buffers inside. The double-sided tape holds onto the embryos that are properly aligned. Also shown in the bottom left corner is an example of a dissected embryo in saline. The anterior end is on the top in this and all subsequent figures. Please click here to view a larger version of this figure. 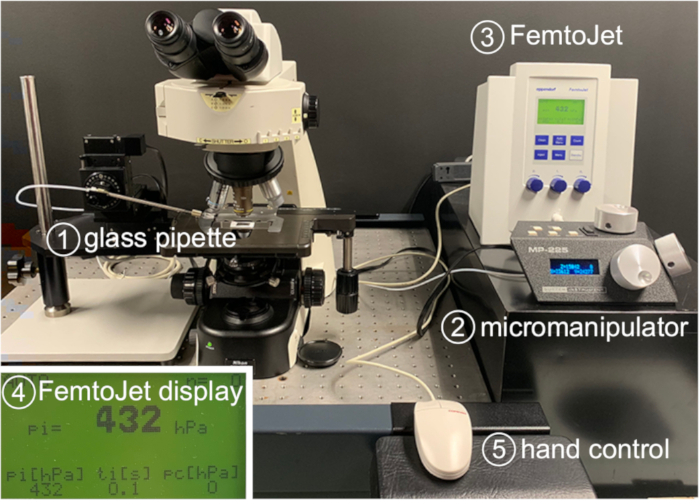 Figure 2: Dye injection equipment. Glass pipette labeling in the figure demonstrates the installation site of the glass pipette (1). The epi-fluorescent microscope is equipped with a LED light source and a series of filter sets. The micromanipulator (2) and the microinjection (3) devices are labeled to the right of the microscope. The inset is a close-up of the display of microinjection device (4) with appropriate values of Pi, Ti, and Pc). Please click here to view a larger version of this figure. 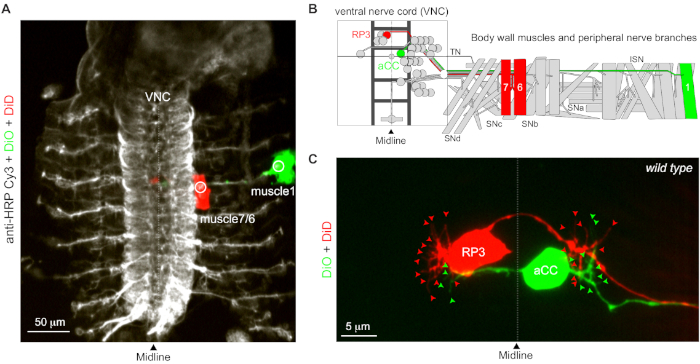 Figure 3: Lipophilic dye preparations of retrogradely labeled motor neurons. (A) Retrograde-labeled motor neurons and their target muscles. The aCC motor neuron innervating muscle 1 (DiO: excitation/emission, 484 nm/501 nm); the RP3 motor neuron innervating muscles 6/7 (DiD: excitation/emission, 644 nm/665 nm). Note that muscles 6/7 also receive innervation from another motor neuron (MNISNb/d-Is) in larval stages; however, MNISNb/d-Is does not have an embryonic counterpart3. Circles indicate sites of dye applications. (B) A schematic diagram of the body wall muscles and peripheral nerve branches in 15 h AEL. The ventral nerve cord (VNC) consists of segmentally repeated and bilaterally symmetrical neuromere with respect to the ventral midline (dotted line). Body wall muscles of each hemi-segment are innervated by 38 motor neurons. The motor neurons project their axons via six major nerve branches (ISN [intersegmental nerve], SNa [segmental nerve a], SNb, SNc, SNd, and TN [transverse nerve]). (C) Dendritic branches from the aCC and RP3 motor neurons show extensive overlap. Both neurons are bipolar neurons, meaning that the neurons establish two different populations of dendrites. Each neuron projects one arbor into the ipsilateral neuropil and another into the contralateral neuropil. Arrowheads point to dendritic tips. Fluorescence images were acquired with a 10x objective or a 100x oil immersion objective. Please click here to view a larger version of this figure. 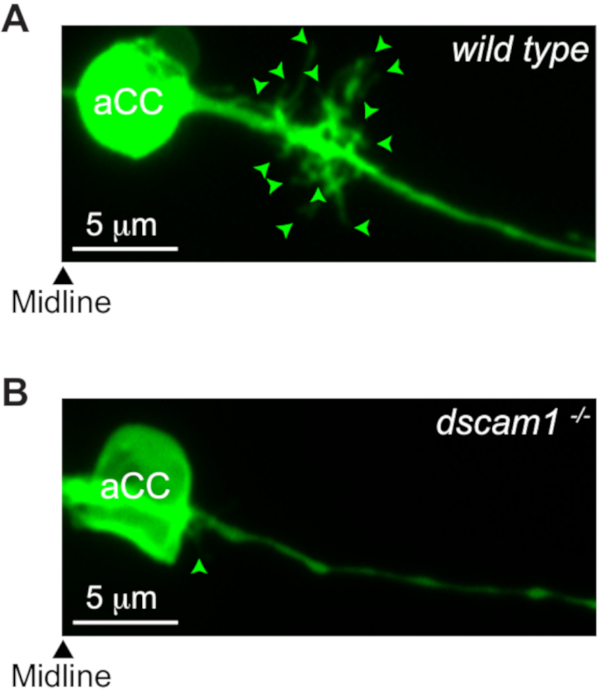 Figure 4: aCC dendritogenesis as revealed with retrograde labeling in hour-15 embryos. (A) In wild type, aCC extends its dendrites into both ipsilateral and contralateral neuropils. For simplicity, we only display the ipsilateral dendrites from aCC in this figure. aCC is labeled with DiO, shown in green. (B) In dscam1 mutants (dscam121/21 from Dr. Tzumin Lee, Janelia Research Campus), aCC has few ipsilateral dendrites in most cases observed17. Arrowheads show dendritic tips. Please click here to view a larger version of this figure.

The use of dye labeling for studying neuronal morphology has several advantages over genetic cell-labeling techniques. The dye labeling technique can minimize the amount of time needed for labeling and imaging the morphologies of motor neurons. The dye labeling process is quite fast as it takes less than 2 h and enables us to define the outline of neuronal projections. As an alternative, one can visualize the aCC motor neuron by choosing a GAL4 line that expresses the yeast GAL4 transcription factor in aCC, and crossing it with a green fluorescent protein (GFP) reporter controlled by the upstream activation sequence (UAS)21. A GFP labeling technique as such requires a genetic cross and thus, takes extra few days.

Another advantage of dye labeling is to permit labeling of the plasma membrane at an extremely high density. A sufficient density of lipophilic dyes can be present on every part of the membrane, allowing us to resolve the fine details of a labeled structure. By contrast, the density of GFP molecules is often dependent on the waiting period after the UAS-GAL4 system kicks in. For example, aCC starts to express GFP from 10 h AEL. By 15 h AEL when we observe, the density of GFP molecules is inadequate to cover up the entire membrane. It results in insufficient labeling of fine neuronal projections (D.K., unpublished data).

Although this technique provides several advantages, it is less advantageous when the erroneous projection of motor axons is evident. In the absence of sidestep, for example, motor neurons display severe axonal defects such as premature stall, segmental border crossing, and excessive branching22. As a consequence, reaching to a certain axon terminal becomes cumbersome. The efficiency of labeling is also age-dependent, being effective in embryos younger than 20 h AEL. As the extracellular matrix proteins increase with development, the labeling of motor neurons appears to be very intricate.

The technique described here allows us to measure many morphological parameters such as neurite total length and number, and neurite branch pattern and shape15,16,17,23,24. Because lipophilic carbocyanine dyes come in many colors (such as DiO, DiA, DiI, DiD, and DiR), multicolor labeling of adjacent motor neurons is also achievable. As shown in Figure 4, dendrites from the aCC and RP3 motor neurons extensively overlap. To further our understanding in motor circuit development, the mechanisms of dendrite-dendrite interaction will be investigated.

Here, we detail the versatile technique that provides an avenue to study neuronal connectivity in the motor circuit. Although the demonstration is restricted to the aCC and RP3 motor neurons in 15 h AEL, this technique can be applied to other motor neurons in different stages of embryonic development. If an axon terminal is accessible with an injection micropipette, this technique could also be applied to labeling of any neuron in the larval and adult stages of flies or even in other organisms.