Transgenic mice have been extremely useful in ascribing physiological function to genes. As such, research in general, and functional studies of airway, in particular, have undergone a remarkable shift toward murine models. Here we provide protocols for in vitro trachea constriction studies to evaluate smooth muscle function in murine airway.

Transgenic and knockout mice have been powerful tools for the investigation of the physiology and pathophysiology of airways1,2. In vitro tensometry of isolated tracheal preparations has proven to be a useful assay of airway smooth muscle (ASM) contractile response in genetically modified mice. These in vitro tracheal preparations are relatively simple, provide a robust response, and retain both functional cholinergic nerve endings and muscle responses, even after long incubations.

Tracheal tensometry also provides a functional assay to study a variety of second messenger signaling pathways that affect contraction of smooth muscle. Contraction in trachea is primarily mediated by parasympathetic, cholinergic nerves that release acetylcholine onto ASM (Figure 1). The major ASM acetylcholine receptors are muscarinic M2 and M3 which are Gi/o and Gq coupled receptors, respectively3,4,5. M3 receptors evoke contraction by coupling to Gq to activate phospholipase C, increase IP3 production and IP3-mediated calcium release from the sarcoplasmic reticulum3,6,7. M2/Gi/o signaling is believed to enhance contractions by inhibition of adenylate cyclase leading to a decrease in cAMP levels5,8,9,10. These pathways constitute the so called "pharmaco-contraction coupling" of airway smooth muscle11. In addition, cholinergic signaling through M2 receptors (and modulated by M3 signaling) involves pathways that depolarize the ASM which in turn activate L-type, voltage-dependent calcium channels (Figure 1) and calcium influx (so called "excitation-contraction coupling")4,7. More detailed reviews on signaling pathways controlling airway constriction can be found4,12. The above pathways appear to be conserved between mice and other species. However, mouse tracheas differ from other species in some signaling pathways. Most prominent is their lack of contractile response to histamine and adenosine13,14, both well-known ASM modulators in humans and other species5,15.

Here we present protocols for the isolation of murine tracheal rings and the in vitro measurement of their contractile output. Included are descriptions of the equipment configuration, trachea ring isolation and contractile measurements. Examples are given for evoking contractions indirectly using high potassium stimulation of nerves and directly by depolarization of ASM muscle to activate voltage-dependent calcium influx (1. high K+, Figure 1). In addition, methods are presented for stimulations of nerves alone using electric field stimulation (2. EFS, Figure 1), or for direct stimulation of ASM muscle using exogenous neurotransmitter applied to the bath (3. exogenous ACH, Figure 1). This flexibility and ease of preparation renders the isolated trachea ring model a robust and functional assay for a number of signaling cascades involved in airway smooth muscle contraction.

The major components of a contraction measurement device are shown schematically in Figure 2A).

Following equilibration, the trachea is challenged twice with a high potassium PSS solution (67 mM KCl, Table I). The contraction generally requires ~ 5-10 minutes to reach steady-state at which time the tissue bath is rinsed several times with normal PSS to completely relax the trachea. The potassium contraction is repeated a second time, and a third time (if necessary) until reproducible contractions are obtained.

The trachea is flanked by two rectangular platinum plates (electrodes) that allow electric field stimulation (EFS) to the preparation. The contractile response to EFS is a function of frequency and voltage. It is also affected by physical parameters such as the area of the electrodes and the distance between them. The power characteristics of the stimulator also affect responses such that at higher voltages and current outputs the stimulator can reach its maximum. The characteristics of any EFS system should be determined by examining the muscle contractile responses at differing stimulus durations, frequencies, voltages and pulse durations. For our experimental setup, we have found that electrodes separated by ~ 4 mm, and stimulation amplitude of 44 V (0.5 ms pulses) and 30 Hz are optimal to achieve reproducible near-maximal contractile responses.

The responsiveness of the trachea to exogenously applied compounds is evaluated either by addition of a single dose of the drug of interest or, by multiple additions of the drug in a cumulative dose fashion. For the trachea, our laboratory routinely used carbachol to activate cholinergic receptors because, unlike acetylcholine, carbachol is not degraded by acetylcholinesterase. A reasonable dose-response range is from 10-8 to 10-5 M carbachol. Fitting of the Log[carbachol]-contractile response curve with a Hill-type equation allows an estimation of EC50 (half-maximal effective concentration) that is a measure of sensitivity of tracheal contraction to the cholinergic agonist 19. It is worth noting that a given dose of carbachol will give a slightly greater response as a single dose than as part of a cumulative dose response curve.

An example of a contractile response to high potassium is shown in Figure 3A. The contraction reaches a maximum within approximately 10 minutes but may show a small decline thereafter. During early washout of high potassium, the muscle may show a transient increase in contraction that is due to a drop in temperature as the small volume of unheated PSS solution in the solution lines transiently perfuses the preparation. This can be minimized by having a minimum dead volume in the tubing connecting the heated PSS reservoir and tissue bath, and also by exchanging solution relatively quickly (generally we pump solutions at 100 ml/min). Each preparation will have some differences in contractile response due to differences in muscle mass or damage incurred during the dissection. Figure 3B shows two tracheas of different muscle mass challenged with high potassium and carbachol. Although the cholinergic-evoked contractions differ, they are similar after normalization to the response with high potassium solution (Figure 3C).

Figure 4 shows an example of a carbachol (cholinergic) evoked contraction using single doses (A) and a cumulative increase (B). The carbachol solutions are added directly to the bath and the bubbled gas helps in rapid mixing. It is worth noting that addition of a single dose (i.e. 1 μM, Figure 4A) has a slightly larger response than the equivalent concentration during a cumulative dose-response curve (1 μM, Figure 4B). Figure 4C shows a plot of contraction force as a function of carbachol concentrations using data from Figure 4B. Effects of carbachol saturate at 10-5 M concentration. Although cholinergic agonists initiates contraction through calcium release mechanisms, a substantial component of the contraction is also mediated by depolarization and activation of voltage-dependent calcium channels 20.

Figure 5A shows an example of EFS-evoked contractions. Tracheas are stimulated using 0.5 millisecond duration, 40 volt pulses until contractions reach a plateau (see inset a1). An increase in stimulation frequency causes an increased contractile response (frequency-response curve is plotted in Figure 5B). Electric field stimulation has been shown to evoke contractions predominantly by activating presynaptic nerves. This is evidenced by the effect of botulinum toxin, a blocker of neurotransmitter release that blocks the majority of the EFS-evoked contractions of trachea 21. Moreover, tetrodotoxin, an agent that blocks Na+ channels also inhibits nerve activity and eliminates the response of trachea to EFS. 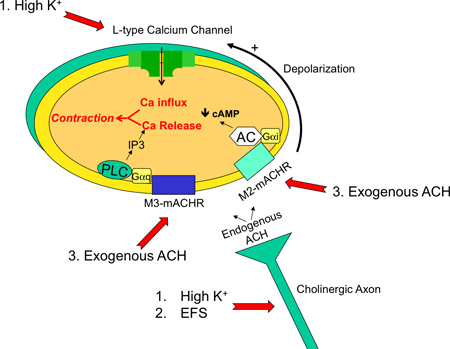 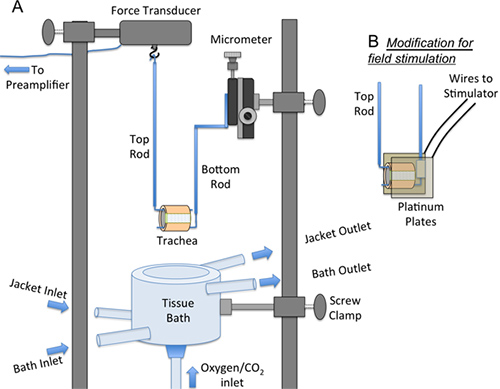 Figure 2. Diagram of equipment used to measure tracheal contractions. A. The force transducer, micrometer and tissue bath are mounted on supporting rods via screw clamps. The tracheal ring is threaded over the top and bottom rods. In the diagram, the tissue bath is positioned below the preparation (i.e. during mounting of the trachea onto the force transducer). During contraction studies, the tissue bath is moved vertically to bathe the preparation. B. For electric field stimulation the bottom rod is modified to include two platinum plates that are mounted laterally to the trachea holding wire. The platinum plates are connected by electrical wires to a stimulator. 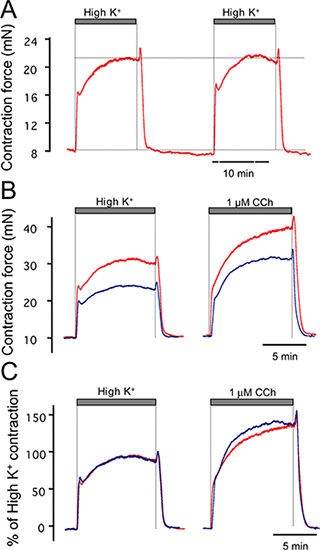 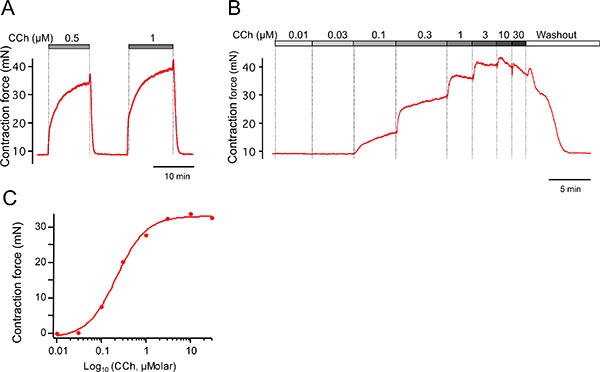 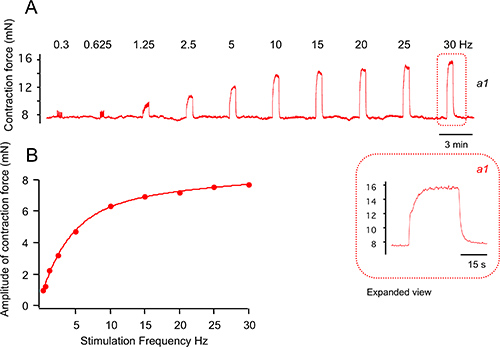 Table 1. Recipe for PSS solutions. Note: Solutions are made fresh weekly, with ultrapure quality water, and are stored in a refrigerator for no longer than 5 days to avoid contaminating growth.

The protocol presented here provides a physiological preparation to assess airway muscle function. We generally operate 3-4 organ bath preparations simultaneously, however, prepackaged systems are available from a number of suppliers that allow simultaneous measurements of up to 8 preparations (ADInstruments, World Precision Instruments, and Harvard Apparatus). We have utilized a number of force transducers and tissue organ baths with equivalent results. However, we find that electric field stimulation provides some variability based on slight differences between stimulating electrodes size, distance between electrode plates, and position of the preparation within the electric field. Thus, extra care should be undertaken to make field electrodes as similar as possible.

Methods were presented to activate contraction either using a cholinergic agonist or with electrical stimulation. Cholinergic agonist application to the tissue bath directly activates smooth muscle. In contrast, with moderate EFS stimulation frequency (up to 25 Hz) the majority of the contraction is mediated through nerve activation and release of neurotransmitter 22. Thus the investigator has the opportunity to investigate agents that affect presynaptic/nerve-mediated contraction using EFS stimulation. Finally, studies indicate that other cell types such as mast cells 23, and epithelial cells 24 also influence contractility in the isolated trachea preparation. Thus, the in vitro mouse trachea preparation provides a robust functional assay for a number of cell types that influence airway smooth muscle contractility.

In summary, the mouse in vitro trachea preparation has been particularly useful in analysis of genetic alterations that affect airway function. Some examples include analysis of gene knockouts of ion channels 17,20,25,26, metabotropic receptors 27,28,29,30, and downstream signaling cascades 31. In addition, the antigen challenged mouse is frequently used for asthma studies 32 and the in vitro trachea preparation provides a useful assay for changes in contractility that ensues following development of asthma.

This work was funded by a grant from the Center for Innovation in Prevention and Treatment of Airway Diseases, NINDS grant (NS052574), and from the Sandler Program for Asthma Research. 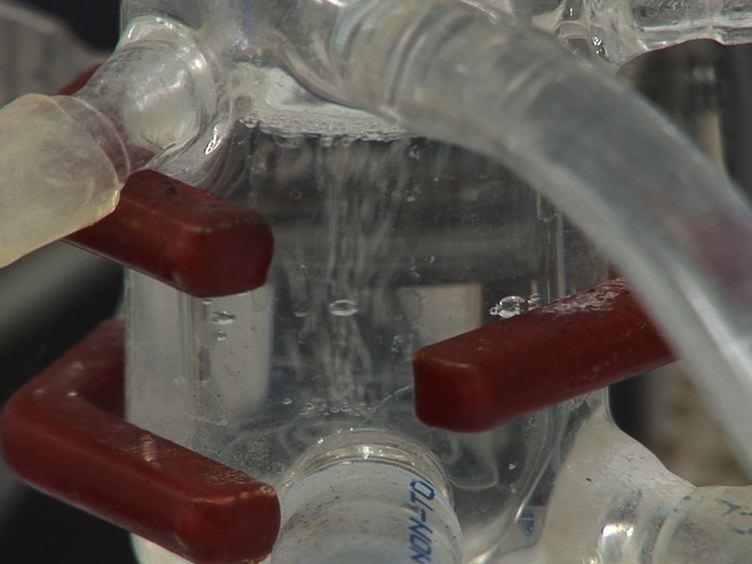