Ice-binding proteins (IBPs), including antifreeze proteins, ice structuring proteins, thermal hysteresis proteins, and ice recrystallization inhibition proteins, are found in cold-adapted organisms and protect them from freeze injuries by interacting with ice crystals. IBPs are found in a variety of organism, including fish1, plants2, 3, arthropods4, 5, fungi6, and bacteria7. IBPs adsorb to the surfaces of ice crystals and prevent water molecules from joining the ice lattice at the IBP adsorption location. Ice that grows on the crystal surface between the adsorbed IBPs develops a high curvature that lowers the temperature at which the ice crystals grow, a phenomenon referred to as the Gibbs-Thomson effect. This depression creates a gap (thermal hysteresis, TH) between the melting point and the nonequilibrium freezing point, within which ice growth is arrested8-10, see Figure 1. One of the main tools used in IBP research is the nanoliter osmometer, which facilitates measurements of the TH activities of IBP solutions. Nanoliter osmometers, such as the Clifton instrument (Clifton Technical Physics, Hartford, NY,) and Otago instrument (Otago Osmometers, Dunedin, New Zealand), were designed to measure the osmolarity of a solution by measuring the melting point depression of droplets with nanoliter volumes. These devices were used to measure the osmolarities of biological samples, such as tears11, and were found to be useful in IBP research. Manual control over these nanoliter osmometers limited the experimental possibilities. Temperature rate changes could not be controlled reliably, the temperature range of the Clifton instrument was limited to 4,000 mOsmol (about -7.5 °C), and temperature recordings as a function of time were not an available option for these instruments.

We designed a custom-made computer-controlled nanoliter osmometer system using a LabVIEW platform (National Instruments). The cold stage, described previously9, 10, contains a metal block through which water circulates, thereby functioning as a heat sink, see Figure 2. Attached to this block are thermoelectric coolers that may be driven using a commercial temperature controller that can be controlled via LabVIEW modules, see Figure 3. Further details are provided below. The major advantage of this system is its sensitive temperature control, see Figure 4. Automated temperature control permits the coordination of a fixed temperature ramp with a video microscopy output containing additional experimental details.

To study the time dependence of the TH activity, we tested a 58 kDa hyperactive IBP from the Antarctic bacterium Marinomonas primoryensis (MpIBP)12. This protein was tagged with enhanced green fluorescence proteins (eGFP) in a construct developed by Peter Davies' group (Queens University)10. We showed that the temperature change profile affected the TH activity. Excellent control over the temperature profile in these experiments significantly improved the TH measurements. The nanoliter osmometer additionally allowed us to test the recrystallization inhibition of IBPs5, 13. In general, recrystallization is a phenomenon in which large crystals grow larger at the expense of small crystals. IBPs efficiently inhibit recrystallization, even at low concentrations14, 15. We used our LabVIEW-controlled osmometer to quantitatively follow the recrystallization of ice and to enforce a constant ice fraction using simultaneous real-time video analysis of the images and temperature feedback from the sample chamber13. The real-time calculations offer additional control options during an experimental procedure. A stage for an inverted microscope was developed to accommodate temperature-controlled microfluidic devices, which will be described elsewhere16.

The cold stage assembly (Figure 2) consists of a set of thermoelectric coolers that cool a copper plate. Heat is removed from the stage by flowing cold water through a closed compartment under the thermoelectric coolers. A 4 mm diameter hole in the middle of the copper plate serves as a viewing window. A 1 mm diameter in-plane hole was drilled to fit the thermistor. A custom-made copper disc (7 mm in diameter) with several holes (500 μm in diameter) was placed on the copper plate and aligned with the viewing window. Air was pumped at a flow rate of 35 ml/sec and dried using Drierite (W.A. Hammond). The dry air was used to ensure a dry environment at the cooling stage. The stage was connected via a 9 pin connection outlet to a temperature controller (Model 3040 or 3150, Newport Corporation, Irvine, California, US). The temperature controller was connected via a cable to a computer GPIB-PCI card (National instruments, Austin, Texas, USA).

4. Measurement of the Time-dependent TH Activity

Measurement of the TH time dependence

The LabVIEW-operated nanoliter osmometer facilitates the performance of accurate TH activity measurements. The constant temperature reduction rate permitted the measurement of the TH time dependence. The precise temperature control enabled by the nanoliter osmometer was crucial for these experiments. The exposure time of an ice crystal to the IBPs in solution is defined as the time period from the formation of the crystal (the end of the melting process) until the sudden growth of ice around the crystal (crystal burst). We found that the exposure time of the ice crystals to the IBPs crucially affected the TH activity. Short periods of IBP exposure (a few seconds) produced a low TH activity in the MpIBP-GFP solution (2.4 μM) (Figure 5). The TH activity increased with IBP exposure time until it reached a plateau at 4 min IBP exposure. At higher IBP concentrations, the plateau was reached at shorter times. 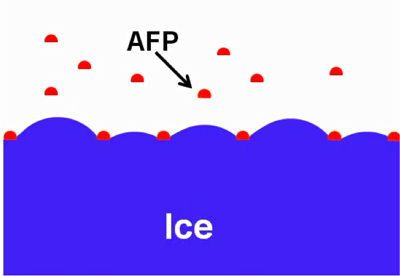 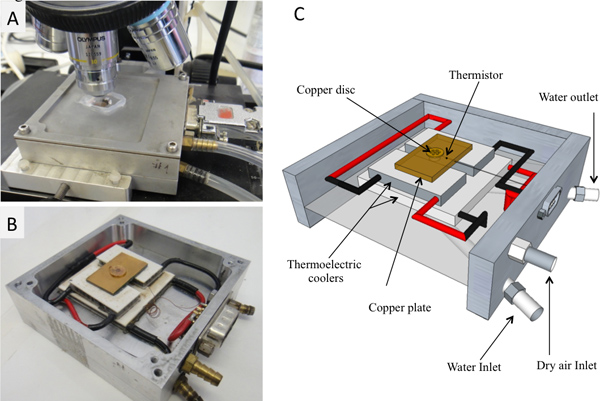 Figure 2. The cooling stage. A) Connected to tubes on the microscope. B) Without the upper lead. C) Schematic diagram. Click here to view larger figure 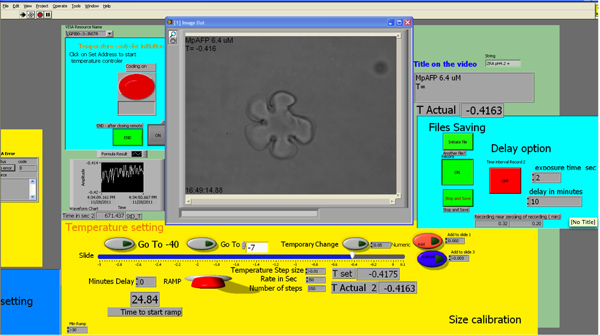 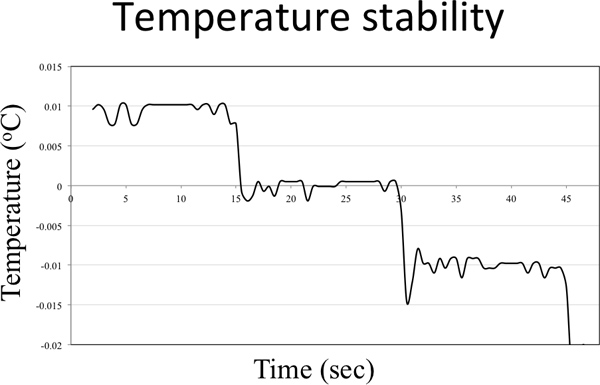 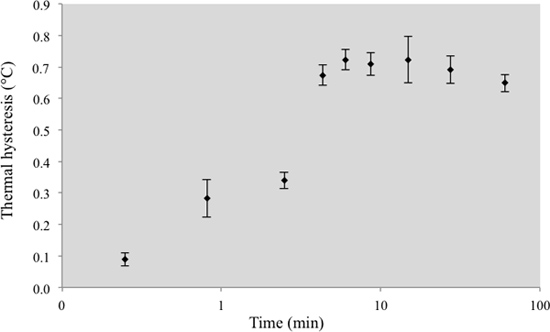 Figure 5. MpIBP TH activity as a function of ice crystal exposure time to the IBPs. Each time point is the average of 3-6 experiments.

This work demonstrates the operation of a computer-controlled nanoliter osmometer that enables accurate measurements of TH activity with extraordinary temperature control. In any temperature-sensitive system, unwanted temperature gradients must be avoided. To avoid temperature gradients in the apparatus presented here, the test solution droplet must be positioned in the center of a hole in the copper disc cooling stage (step 2.7). Additionally, the single crystal should be in the center of the droplet rather than near the edges (in most cases, this will happen spontaneously). The time dependence described indicates that the cooling rate may influence the TH readings. Thus, we suggest including a report of the time during which the crystal was exposed to the solution prior to cooling, as well as the cooling rate. We typically waited 10 min prior to ramping down the temperature at 0.01 °C steps each 4 sec.

The LabVIEW-controlled cooling stage was adapted for use with an inverted microscope on which microfluidic devices could be thermally manipulated. This system facilitates the performance of solution exchange experiments involving ice crystals and IBPs tagged with eGFP9, 10, 16. The LabVIEW-controlled system may be adapted to a Clifton stage by connecting the 3,040 temperature controller via a designated adapting electric circuit. Such a system is operated in the Davies lab17. The LabVIEW software and the designated adapting electric circuit design for the Clifton stage are available upon request.

In conclusion, we describe a nanoliter osmometer that facilitates the sensitive control and manipulation of temperature and the rate of temperature increase and decrease (with 0.002 °C sensitivity), coordinated with a video interface through a LabVIEW routine for real-time analysis. This system can perform reproducible rate-controlled experiments that are important for investigating the kinetics of IBP interactions with ice. Such experiments can address several long-debated issues surrounding the mechanism of action of IBPs.

This research was supported by the ISF, NSF, and ERC. We would like to acknowledge technical help with the temperature stage from Randy Milford, Michael Koren, Doug Shafer, and Jeremy Dennison. Assistance with software development was provided by Or Chen, Di Xu, Rajesh Sannareddy, and Sumit Bhattachary. We would like to thank our collaborators Prof. Peter L. Davies and Dr. Laurie A. Graham for the MpIBP protein and helpful discussions. We also thank lab members Dr. Maya Bar-Dolev, Yangzhong Qin, Dr. Yeliz Celik, Dr. Natalya Pertaya, Ortal Mizrahy, and Shlomit Guy for their user feedback. 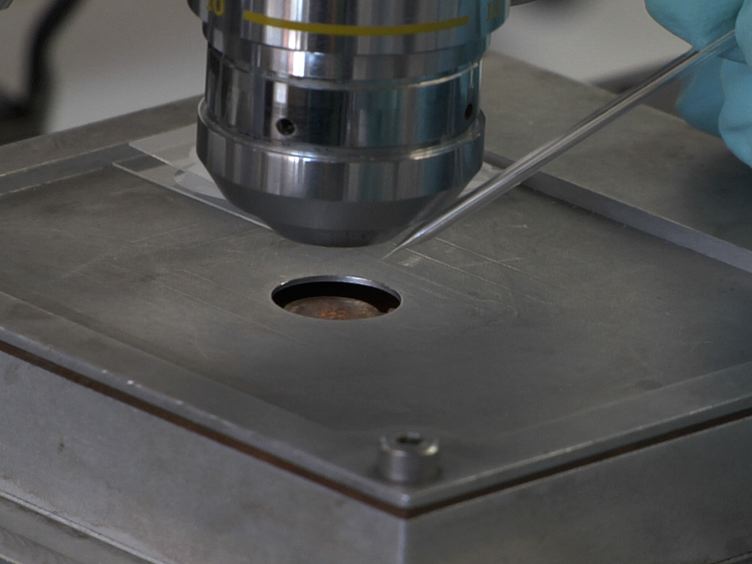