Described here is an in vivo technique to image sub-cellular structures in animals exposed to anoxia using a gas flow through microincubation chamber in conjunction with a spinning disc confocal microscope. This method is straightforward and flexible enough to suit a variety of experimental parameters and model systems.

Caenorhabdits elegans has been used extensively in the study of stress resistance, which is facilitated by the transparency of the adult and embryo stages as well as by the availability of genetic mutants and transgenic strains expressing a myriad of fusion proteins1-4. In addition, dynamic processes such as cell division can be viewed using fluorescently labeled reporter proteins. The study of mitosis can be facilitated through the use of time-lapse experiments in various systems including intact organisms; thus the early C. elegans embryo is well suited for this study. Presented here is a technique by which in vivo imaging of sub-cellular structures in response to anoxic (99.999% N2; <2 ppm O2) stress is possible using a simple gas flow through setup on a high-powered microscope. A microincubation chamber is used in conjunction with nitrogen gas flow through and a spinning disc confocal microscope to create a controlled environment in which animals can be imaged in vivo. Using GFP-tagged gamma tubulin and histone, the dynamics and arrest of cell division can be monitored before, during and after exposure to an oxygen-deprived environment. The results of this technique are high resolution, detailed videos and images of cellular structures within blastomeres of embryos exposed to oxygen deprivation.

C. elegans embryos exposed to severe oxygen deprivation (anoxia) are able to survive by arresting biological processes including development and cell division7. The anoxia-induced arrest of cell division can be monitored, at a sub-cellular level, by using a microincubation chamber in conjunction with nitrogen gas flow through and a spinning disc confocal microscope to create a controlled environment in which animals can be imaged in vivo (Figure 1). Cellular structures of interest can be monitored in the embryo exposed to various gas environments; in this case we used GFP-tagged gamma tubulin and histone H2B to monitor chromosome structure in an embryo exposed to anoxia.

Within the embryo exposed to anoxia, the chromosomes of prophase blastomeres will condense and align with the inner nuclear periphery; a phenomenon referred to as "chromosome docking" (Figure 2, Movie 1). Upon re-oxygenation cell cycle progression will resume and chromosomes of prophase blastomeres will move from the nuclear periphery to the equatorial plate indicating progression to metaphase (Movie 2). This technique can also been used to visualize arrest at other stages of cell division or bivalent chromosomes of oocytes in hermaphrodites exposed to anoxia8. 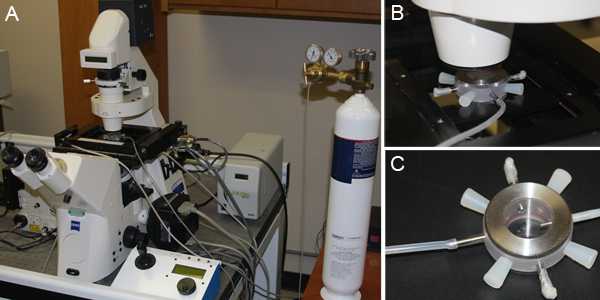 Movie 1. Time-lapse analysis of a blastomere in transition from normoxia to anoxia. Note chromosomes aligning to the nuclear periphery. Images were captured 28 min after gas flow through began. Click here to view movie.

Movie 2. Time-lapse analysis of a blastomere recovering from anoxia. As oxygen returns to the environment cell cycle resumes. Images were captured 10 min after gas flow through was ceased. Click here to view movie.

Although exposure to severe oxygen deprivation can be fatal for some organisms, some organisms are able to survive exposure to anoxia. In the case of C. elegans, survival of anoxia exposure depends on developmental stage and response to anoxia is entry into a reversible state of suspended animation in which a number of observable biological processes are arrested. Cell division, development, movement, eating and reproductive processes cease until oxygen is reintroduced into the environment7,9. Cell cycle progression, of anoxia-exposed embryos, reversibly arrests at interphase, late prophase or metaphase. The use of cell biological techniques such as immunostaining in fixed samples and in vivo GFP fusion protein assays, which allows imaging of specific sub-cellular structures in an oxygen deprived environment, have been instrumental in identifying and characterizing specific hallmarks of anoxia-induced suspended animation in C. elegans 8,10,11.

Both embryos and oocytes display marked characteristics of anoxia-induced suspended animation that are easily visible using fluorescent microscopy in combination with fluorescently labeled proteins or antibodies against specific proteins to analyze fixed embryos. Interphase blastomeres, of embryos exposed to anoxia, are characterized by partial condensation of chromatin and arrest of cell cycle progression with some chromatin aligning at the nuclear periphery9. While nuclear envelope breakdown (NEBD) signifies a final commitment to mitosis in anoxia, prophase arrest is characterized by arrest of NEBD, and alignment of fully condensed chromosomes at the nuclear periphery10,12. Metaphase arrest, on the other hand, is characterized by arrest of the chromosomes at the metaphase plate and partial depolymerization of microtubules, among other things. Anoxia-induced cell cycle arrest at all stages is reversible and upon reoxygenation, cell-cycle progression resumes. In anoxia exposures of 24 hr or less, control and experimental animals are indistinguishable upon recovery7. Using the methods described here the animal is able to survive anoxia exposure.

The method presented here utilizes the TH32 (unc-119 (ed3) ruIs32 III; ddIs6) strain of C. elegans. This strain expresses two fluorescently labeled proteins that facilitate the visualization of centrosomes and chromosomes. Centrosomes are marked by ddIs6 [pie-1::tbg-1::GFP + unc-119 (+)], which encodes GFP-tagged gamma tubulin, and localizes to centrosomes throughout the cell cycle. The position of the centrosomes is indicative of the stage of the cell cycle and is helpful in timing anoxia experiments. Chromosomes are marked by ruIs32 [unc-119 (+) pie-1::GFP::H2B], which encodes a GFP labeled histone protein and is driven by a germ-line specific promoter5. Thus, the movement and localization of chromosomes within blastomeres or oocytes can be followed. Within a developing embryo, prior to anoxia-induced cell cycle arrest, a blastomere, and thus the nucleus, can move out of the focal plane making it necessary to adjust the focal plane while imaging. It is possible to follow more than one blastomere or nucleus but manual focusing on the cellular object of interest may need to be done to optimize visualization of the multiple cellular components of interest. This may limit the ability to automate the process unless one is using software to track a specific region and follow it. We have not tried to automate the process.

To optimize the protocol for one's specific assay one may consider various aspects of microscopy and genetic background of interest13. Transgenic animals have been successfully imaged for up to 2 hr in anoxia using this methodology (data not shown) and longer times have not been tested. We have analyzed embryos that are sensitive to anoxia (npp-16(ok1839)) using the same technique (e.g. same anoxia exposure time) as controls and found that the phenotype (in this case abnormal arrest of prophase blastomeres) can be captured within 30 min of exposure to anoxia10. Embryos can survive over three days of anoxia using other methodologies; we have not identified mutations that result in a resistance to anoxia exposure (survival extended past 3 days of exposure) in the embryo.

For our purposes, we are imaging a highly dynamic cellular process, and are using a spinning disk confocal microscope for rapid image acquisition. Depending upon the particular needs of an experiment, it will need to be determined whether a different kind of microscopy technique may be more appropriate.

When choosing or developing a transgenic strain for this method, it is important to consider the sensitivity of the microscope that will be used as well as the photobleaching tendency of the particular fluorophore. The use of time lapse imaging in this methodology may lead to significant photo bleaching in strains that do not strongly express a fluorescent protein.

There are several technical challenges and limitations to be considered when collecting images in vivo using this methodology. Because of the size of the chamber, and the potentially time consuming nature of the experiments, it may be difficult to analyze a large number of samples in a short amount of time. Experiments requiring large sample sizes can often be paired with other methods of anoxia exposure to generate large data sets, and in vivo imaging can be used to document, verify or more closely examine a phenotype of interest. Additionally, if the experiment requires examination at specific time points during a long-term exposure, issues with sample desiccation may arise. Despite being covered with halocarbon oil, animals may begin to desiccate due to continuous gas flow; therefore limiting the experimental time could alleviate this issue. Additionally, one can consider using hydrated gas or a chamber that allows humidity control to alleviate desiccation issues.

One advantage of this technique is that hypoxia experiments are also feasible. Thus, for additional oxygen deprivation studies one can simply use a gas tank with a specified oxygen concentration (e.g. 1% O2 balanced with N2) to examine responses to hypoxia rather than a completely anoxic environment. Additionally, another simple and flexible modification is the use of other gasses including O2 levels above 21%, H2S or CO; however, the safety of using these gas mixes is a major consideration and additional precautions must be taken14.

Significance of the Technique

While we have outlined this method to expose C. elegans to anoxia and visualize hallmarks of anoxia-induced suspended animation within an embryo using very specific sub-cellular markers, these representative results are merely a single assay in a wide variety of experimental possibilities using the chamber system we describe here. Oxygen deprivation has been shown to affect a number of cellular processes in a wide range of organisms, and by exploiting this technique, specific effects of anoxia, hypoxia, and a variety of other environments can be visualized and captured in vivo. For example, using C. elegans this system could be used for analyzing other phenotypes induced by oxygen deprivation, as permitted with the use of the tricaine/tetramizole anesthetic (i.e. pharyngeal pumping and reproductive processes).

The application of this methodology is not limited to C. elegans. This gas flow through chamber setup provides a simple method for exposing cells and whole organisms to low concentrations of oxygen while simultaneously capturing cellular changes and visualizing activity of fluorescent protein fusions. For example, this method is readily adaptable to yeast, cell culture or small invertebrate or vertebrate embryos whose sizes are not too large for the chamber.

We would like to convey our appreciation for the input and comments from members of the Padilla Lab. Nematode strains in this work were provided by the Caenorhabditis Genetics Center, which is funded by the NIH National Center for Research Resources (NCRR). We acknowledge and thank Dr. Lon Turnbull for technical assistance with confocal microscopy. This work has been supported by a grant from the National Science Foundation (NSF-IOS, CAREER) to P.A.P. 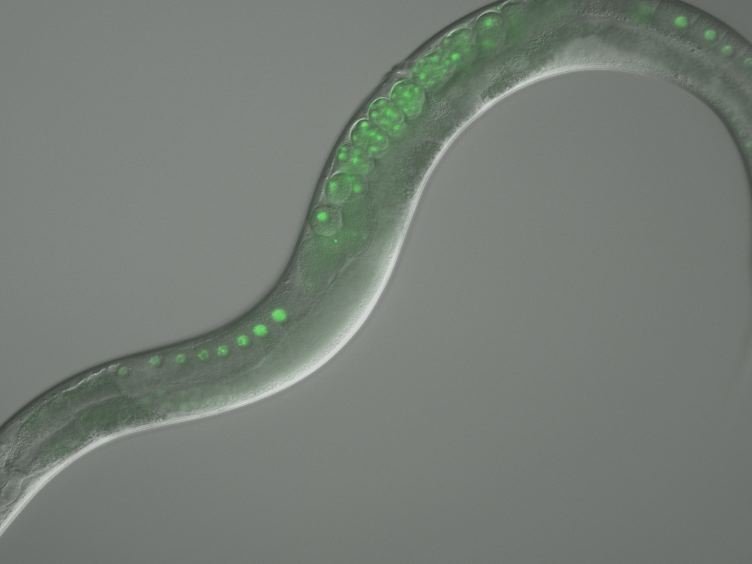