Repeated retro-orbital injections of cationic liposomes/siRNA/ITSN-1s complexes in mice, every 72 hours for 24 days, efficiently deliver the siRNA duplex to the mouse lung microvasculature reducing ITSN-1s mRNA and protein expression by 75%. This technique is highly reproducible in an animal model, has no adverse effects and avoids fatalities.

Naked siRNA cannot penetrate the cell membrane, being negatively charged, and it is easily degraded by enzymes in blood, tissues, and cells. Even with recently structural modifications to improve stability, siRNA accumulation at the target site after administration is extremely low and requires an efficient intracellular vehicle5. Cationic liposomes emerged as safe nucleic acids carriers with the potential to transfer large pieces of DNA/RNA into cells by encapsulating and protecting the nucleic acids from enzymatic degradation6. Also, cationic liposomes spontaneously interact with DNA/RNA, thus promoting gene transfer to the cells2. More recently liposomes have been applied to deliver vaccines and low-molecular-weight drugs7. Liposomal delivery of microRNA-7-expressing plasmid overcomes epidermal growth factor receptor tyrosine kinase inhibitor-resistance in lung cancer cells8. When targeting the vascular endothelium, the intravenous delivery is essential because the complexes are unlikely to cross the endothelial barrier and extravasate in to the interstitium9. By comparison to other organs, ECs from the microvasculature of the lung have the greatest uptake and avidly internalize cationic liposome and DNA/RNA complexes, followed by the lymph nodes and Peyer's patches9. Intravenous delivery in rodent models of siRNA via retro-orbital or tail vein injections has been proven harmless even in high concentrations, such as 50 mg/kg10. In the published literature the composition of cationic liposomes differs, based on the lipids formulation and their equimolar ratio11, 12. There is a wide array of potential applications using cationic liposomes for gene delivery in vivo, whether targeting down-regulation/over-expression of the proteins, delivery of vaccines or anti-tumor therapies13-15. Important to remember is that the efficiency of DNA/RNA-cellular membrane interaction is regulated by the shape coupling between generated complexes and membrane lipids. This suggests that tailoring the lipids composition to the targeted cellular membrane profiles may be beneficial and result in high rates of transfection in a particular cell type6.

All mouse experiments were approved and performed in accordance with the guidelines of Rush University Institutional Animal Care and Use Committee.

The mice will expire fully anesthetized during the procedure.

ITSN-1s protein and mRNA levels were monitored at several time points after siRNAITSN delivery by Western blot and conventional and quantitative PCR as in4. ITSN-1s protein and mRNA levels in siRNAITSN-treated mouse lungs were about 75% lower by reference to controls during continuous knockdown of ITSN-1s for 21 days. Without ITSN-1s, dynamin-2, a major interacting partner of ITSN-1s and essential player in detachment of caveolae from the plasma membrane is not efficiently recruited to the endocytic site and thereby, caveolae detachment from the plasma membrane and formation of free vesicular carriers is disrupted1, 17. Therefore, ineffective membrane fission and impaired formation of free vesicular carriers caused deficient endocytosis and transendothelial transport, disruption of inter-endothelial barrier and pulmonary edema (Figure 1). Moreover, down-regulation of ITSN-1s up regulated alternative transport pathways to compensate for deficient endocytosis. We noticed membranous rings (Figures 2A and 2a1), pleomorphic tubules (Figure 2B), and enlarged endosomes fused with typical caveolae (Figure 2C) actively involved in the uptake and transport gold-albumin. A significant finding is the decrease in caveolae number in ITSN-1s deficient mouse lung endothelium by reference to controls, Table 1. Prolonged ITSN-1s inhibition for 24 days by repeated delivery of cationic liposomes/siRNAITSN reduced the pulmonary edema in mice by partially restoring the inter-endothelial barrier integrity. EM morphological studies showed that the 8nm gold-albumin tracer could not penetrate the inter-endothelial junctions, at this time point. Instead, they formed filtration residues in the luminal introit of the junction (Figure 3). However, the perivascular spaces showed some dilation and mild edema, suggesting that junctions are impermeable to this size of the particles, but still leaky. Also, the morphological intermediates of alternative endocytic pathways are active and present in higher numbers. Noticeably, the morphometric analyses indicated that the number of membranous ring/tubules labeled by gold-albumin particles increased by 14 fold in ITSN-1s chronic deficient mouse lung endothelium when compared to controls, Table 1. Caveolae number is partially restored, only 17.8% decrease, by reference to controls. Thus, our results demonstrate that repeated delivery of cationic liposomes/siRNAITSN complexes is a suitable methodology to study the effects of long-term protein knockdown in vivo. 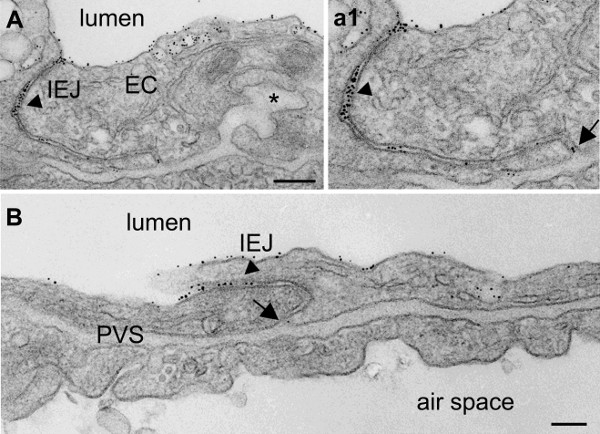 Figure 1. Representative electron micrographs showing open interendothelial junctions (IEJs) labeled throughout their length by 8 nm gold-albumin particles. Arrowhead in A and magnified a1, points to three-four gold-albumin particles located close to each other in the same plan, indicative of the wide opening of the IEJ. Gold particles are also associated with the abluminal exit of IEJs (A, B - arrows). Note also the limited number of caveolae and dilation of the pericapillary space pcs; asterisks). Bars: 200 nm (A); 100 nm (B, a1). 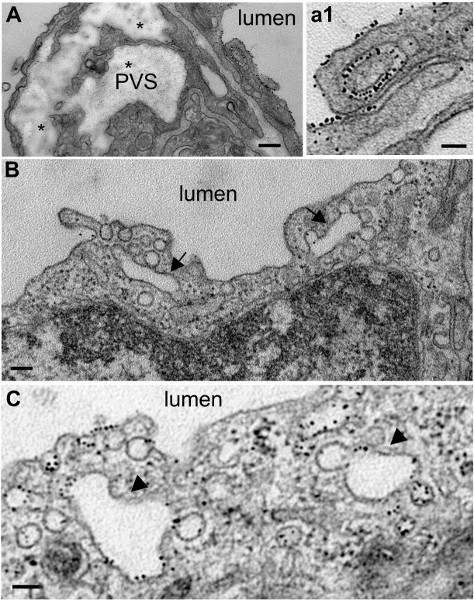 Figure 2. Acute perturbation of ITSN-1s expression induces pleomorphic endocytic /transcytotic intermediates. Representative EM images of membranous rings (A, a1), tubular elements (B, arrows) and enlarged endosomes (C, arrowheads), loaded with 8 nm gold-albumin and associated with caveolae-like morphology. Note also the severe dilation of the perivascular space (pvs) and the proteinaceous edema (A). Bars: 250 nm (A); 200 nm (B) 100 nm (a1, C).

Figure 3. Chronic inhibition of ITSN-1s expression partially restores IEJ integrity. Filtration residues in the luminal introit of an IEJ (arrowhead). Mild dilation (*) of the pvs suggests leakiness of the IEJs. Multivesicular bodies (mvb), in close proximity of the plasma membrane have some of their internal small vesicles, labeled by 8 nm gold albumin particles. Bar: 100 nm.

Based on previous studies published by others9 and us1, 18 we developed this methodology for long term knock down of ITSN-1s in vivo by repeated intravenous administration (every 72 hr, for 24 consecutive days) of specific siRNA/liposome complexes. This experimental approach is efficient, can be used safely and repeatedly and it can be easily extended to study the involvement of a gene encoding any protein of interest in lung endothelium and pulmonary homeostasis. Under the experimental conditions set up by us for repeated siRNA/liposomes delivery, mice appeared normal with no signs of toxicity or immune responses. Systemic administration of siRNAITSN/liposome complexes is the most clinically relevant route for indications as cancer and other metabolic diseases. The lung is the first capillary bed encountered by the siRNA/liposome complexes injected intravenously and this may explain the efficient KDITSN in the lung.

One limitation of the study is the time dependent continuous aggregation of cationic liposomes2. To overcome it, the siRNA/liposome complexes were delivered shortly (less than 2 hr) after generation and preserved on ice at all times before use. Conventional cationic liposomes, such as the ones used in our study are proposed to be cleared by the reticulo-endothelial system. The rate of up-take by phagocytes can de decreased by liposomal pegylation. Steric stabilization with polyethylene glycol (PEG) coating prolongs liposomes' circulation time while having a more even tissular distribution. These factors become very important characteristics in anti-cancer therapies where prolonged circulation of the chemotherapeutic agents is desired12.

In regard to the EM procedure, the minute amounts of tissue examined should be compensated for by systematic and extensive morphological and morphometric analysis as well as by examination of serial sections, when needed.

While our methodology optimizes the dosage schedule for sustained delivery and siRNA efficacy, further studies are needed to focus on the high efficiency identification of the right targets and on the assessment of risk/benefits parameters involved.

This work was supported by National Institute of Health Grants R01HL089462 to SP. 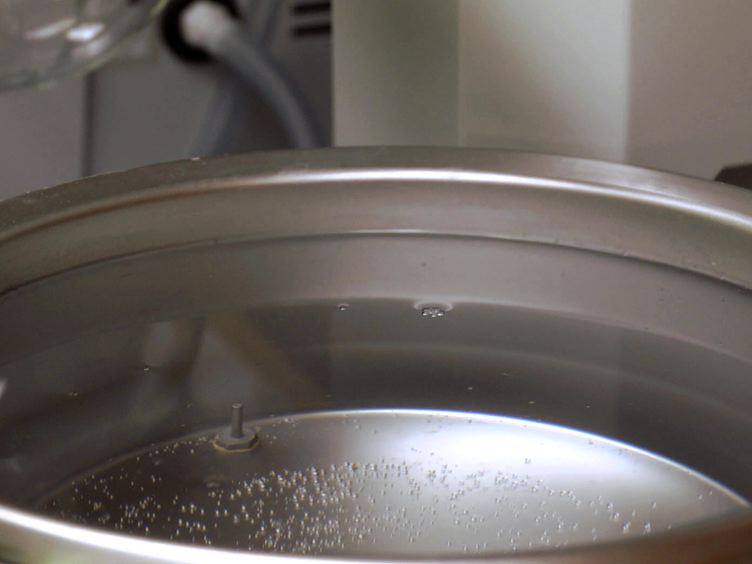