The Quellung reaction is the gold standard technique for serotyping Streptococcus pneumoniae. This technique utilizes a microscope and specific pneumococcal antisera and is commonly used in reference and research laboratories worldwide.

There are over 90 different capsular serotypes of Streptococcus pneumoniae (the pneumococcus). As well as being a tool for understanding pneumococcal epidemiology, capsular serotyping can provide useful information for vaccine efficacy and impact studies. The Quellung reaction is the gold standard method for pneumococcal capsular serotyping. The method involves testing a pneumococcal cell suspension with pooled and specific antisera directed against the capsular polysaccharide. The antigen-antibody reactions are observed microscopically. The protocol has three main steps: 1) preparation of a bacterial cell suspension, 2) mixing of cells and antisera on a glass slide, and 3) reading the Quellung reaction using a microscope. The Quellung reaction is reasonably simple to perform and can be applied wherever a suitable microscope and antisera are available.

Streptococcus pneumoniae (the pneumococcus) is responsible for the death of an estimated 800,000 children under the age of five annually, with the burden of disease falling predominantly in resource-poor countries1. Pneumococcal diseases range in severity from localized infections such as acute otitis media to severe life threatening infections such as sepsis, meningitis and pneumonia2. Over 90 capsular serotypes of pneumococci have been described3,4. Current pneumococcal vaccines provide protection against the serotypes that are responsible for the majority of invasive disease5,6. However, widespread use of vaccines has been associated with replacement of serotypes included in the vaccine by nonvaccine serotypes, both in nasopharyngeal carriage and invasive disease7,8. This highlights the importance of serotyping for epidemiological surveillance and long-term vaccine impact studies9.

The gold standard method for pneumococcal typing is the capsular reaction test, known as the Quellung reaction, first described by Neufeld in 1902 (see Austrian10). A high degree of concordance has been found between laboratories, and between the Quellung reaction and other serotyping methods11-13. There are several variations of the Quellung reaction10,14-16.  The method described here does not require the use of a counter stain or the oil immersion lens; rather, a drop of prepared specimen is mixed with the typing serum and examined immediately under 400X magnification.

The Quellung reaction is usually performed using commercially available antisera. The method described here uses less antisera compared with some other methods16,17, making it more cost effective. Once an isolate is identified as a pneumococcus, it is sequentially tested with antisera pools until a positive reaction is observed. Each pool antiserum contains different mixtures of antisera raised against 91 pneumococcal serotypes18. Once the pool is established, the individual type and group antisera that are included in the reactive pool are tested individually in sequence. Type antisera generally react with a single serotype (e.g. Type 1 antiserum reacts with serotype 1), whereas group antisera react with all the serotypes in a particular group (e.g. Group 22 antiserum reacts with serotypes 22F and 22A). Some serotypes within groups are further differentiated using factor antisera (e.g. Serotype 22F reacts with factor 22b, but not 22c). In this case testing is continued with all relevant factor antisera until serotype is determined19,20. The Quellung reaction is simple and quick14 and can be performed in any laboratory that is equipped with a good quality microscope and appropriate set of antisera.

1. Preparation of Cell Suspension for Typing

The cell suspension prepared in step 1.1 will also be used as the negative control, and should be checked for cell density before adding the typing sera.

A positive Quellung reaction occurs when type-specific antibody binds to the capsule of the pneumococcus, leading to a change in its refractive index10. When viewed under a microscope, the bacteria appear ‘swollen’ and more visible14. Figure 1A shows pneumococcal cells in HI broth. When type-specific anti-serum is added to the bacterial suspension, pneumococci appear ‘swollen’, refractive and more rounded (Figure 1B).

Too many bacterial cells added to the broth may result in aggregation of cells or a false negative reaction. Figure 2 shows inocula of pneumococcal cells in HI broth that are ‘too heavy’ (Figure 2A) or ‘too light’ (Figure 2B).

Figure 2. Too heavy and too light inocula. Preparations of pneumococcal cell suspensions that are too heavy (2A) or too light (2B), when viewed under 400X magnification.

A critical step in this technique is ensuring a pure culture is used to prepare the suspension along with adding a suitable number of bacterial cells to the broth. It should be noted that colony growth and morphology on agar plates varies between different pneumococcal isolates. Some produce dry and rough colonies, which can be difficult to pick off with a loop and do not emulsify well in the broth. For this reason, a larger sweep of bacteria may be required when preparing the cell suspension. In any case, it is imperative that individual cells, and not aggregates, are obvious in the negative control so their relative size can be compared to the cells with antisera added. Additionally, too many bacterial cells may result in a false negative reaction, where an excess of capsular antigen may inhibit the Quellung reaction10. For this reason, it is important to create a bacterial suspension with a suitable cell density (Figure 1). The suspension may be preserved for several months by the addition of several drops of concentrated formalin. This enables easier batch testing and also sterilizes the broth reducing the risk of laboratory-acquired infections; although this must be weighed against the safety risk of handling formalin, which is toxic, corrosive, carcinogenic, sensitizing, and flammable. In addition, we have observed that some isolates show weaker reactions in the presence of formalin (data not shown).

Quellung reactions are examined using a microscope. The use of phase contrast enhances the visibility of the capsule. In some laboratories, the reaction is viewed using oil-immersion at 1,000X magnification14,16.  In addition, some laboratories use a counter stain (methylene blue) to further enhance the visibility of a positive reaction10,16,22. The method presented here is viewed without oil-immersion and under 400X magnification15,17. This method is quick, simple and relatively easy to read23.

It is important to maintain good internal quality control procedures to ensure the antisera and testing procedures are in order. Participation in an external quality assurance program is often beneficial.

This work was supported by the Bill and Melinda Gates Foundation (PneuCarriage project, Grant 52099) and the Victorian Government’s Operational Infrastructure Support Program. Thanks to Eileen Dunne, Janet Strachan, and Kim Hare for critical reading of the manuscript. 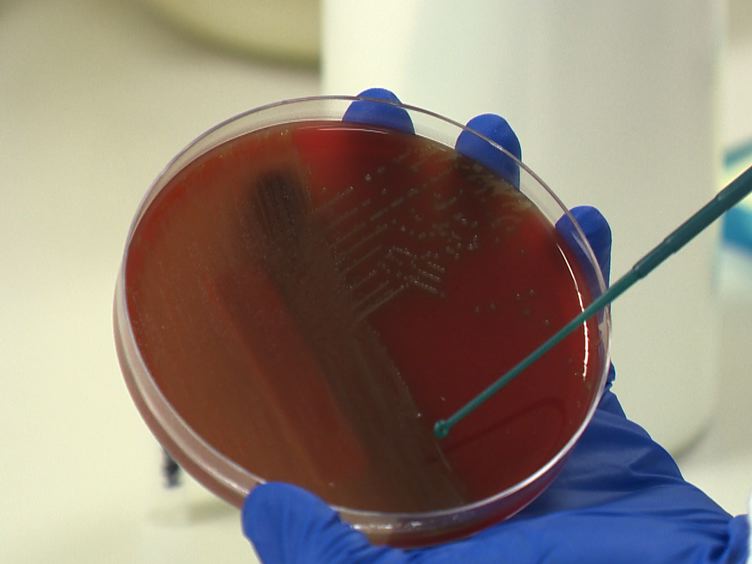