The goal of this protocol is to outline a surgical approach to provide direct access to the dorsal cochlear nucleus in a murine model.

Investigation into the use of virus-mediated gene transfer to arrest or reverse hearing loss has largely been relegated to the peripheral auditory system. Few studies have examined gene transfer to the central auditory system. The dorsal cochlear nucleus (DCN) of the brainstem, which contains second order neurons of the auditory pathway, is a potential site for gene transfer. In this protocol, a technique for direct and maximal exposure of the murine DCN via a posterior fossa approach is demonstrated. This approach allows for either acute or survival surgery. Following direct visualization of the DCN, a host of experiments are possible, including injection of opsins into the cochlear nucleus and subsequent stimulation by an optical fiber coupled to a blue light laser. Other neurophysiology experiments, such as electrical stimulation and neural injector tracings are also feasible. The level of visualization and the duration of stimulation achievable make this approach applicable to a wide range of experiments.

Virus-mediated gene transfer to reverse hearing loss has largely been focused on the peripheral auditory system.1 Targeting the cochlea, investigators have examined a host of delivery routes, including osmotic minipump infusion2, vector-transgene complex-soaked Gelfoam®2 or gelatin sponge3, direct microinjection4; numerous gene transfer vectors, including adeno-associated viral vectors5,6, lentiviral vectors7, and cationic liposomes2; and the dissemination of gene transfer vectors beyond the target tissue2. Most recently, adeno-associated virus (AAV)-1 has been introduced in the cochlea in order to treat deafness in mice due to loss of vesicular glutamate transporter-3.8 Further, the application of optogenetics in peripheral auditory system has recently been described.9

Few studies, however, have examined gene transfer to the central auditory system. The dorsal cochlear nucleus (DCN) of the brainstem contain second order neurons of the auditory pathway. While gene transfer techniques in the cochlear nucleus (CN) may be utilized for a host of investigations, gene transfer of opsins, light-sensitive proteins, to the DCN may also be utilized to enable optogenetics-based experimental techniques. Following virus-mediated gene transfer delivery of an opsin, such as channelrhodopsin-2 (ChR2), the neurons of the DCN becomes sensitive to light stimuli. Optogenetic gene transfer has been previously attempted in several brainstem regions, including the rat retrotrapezoid nucleus, mouse locus coeruleus, monkey superior colliculus, and mouse ventral tegmental area.10-14

Recently, investigators have examined the use of optogenetics in the DCN.15,16 The DCN is the location of placement of auditory brainstem implants in humans, making it an attractive part of the auditory system to study for translational studies on auditory neuroprostheses. However, given the location of the DCN, surgical exposure is challenging. The technique described herein provides a protocol for maximal exposure of the DCN via posterior fossa approach to enable viral vector gene transfer and optogenetics-based experiments in a murine model. Previous studies used stereotactic microinjection into the DCN with channelrhodopsin-2.16 Stereotaxic injections, however, are potentially less accurate than injections made by direct visualization, especially in a nucleus as small and deep along the brainstem as the DCN. Transgenic mice expressing tissue specific proteins in the CN are also an attractive option and would obviate the need for gene transfer. Our protocol for exposure of the DCN would also work in transgenic mice as the DCN would need to be directly exposed for optical stimulation. This technique for surgical exposure of the DCN is adapted from previous protocols involving recordings from the auditory nerve and cochlear nucleus in mice and rat models.15,17-20

The overall goal of the protocol is to provide direct exposure to the CN to allow for gene transfer techniques. More specifically, the approach is compatible with both acute and survival surgery and the preparation can be repeated in the same animal for subsequent neurophysiological testing. The direct exposure of the DCN protocol has implications for optogenetics- and virus-mediated gene transfer-based experimentation in other nuclei of the brainstem.

NOTE: All experimental procedures are performed in accordance with the Animal Care and Use Committee of the Massachusetts Eye and Ear Infirmary and Harvard Medical School, which follow national animal care guidelines, including Public Health Service Policy on Humane Care and Use of laboratory Animals, the ILAR Guide, and the Animal Welfare Act. Experimental procedures listed below detail exposure of the left DCN. Use sterile instruments while performing survival surgery.

Following initial exposure of the DCN, gene transfer with an opsin, and the incubation period, the DCN can then be stimulated by a blue light laser. The secondary craniotomy exposing the surface of the DCN for optical stimulation is similar in technical approach to the primary craniotomy (Supp. Movie 1). The DCN, being a surface structure that is less than 300 µm in thickness. The experimental murine preparation remains viable for up to 6 hr. 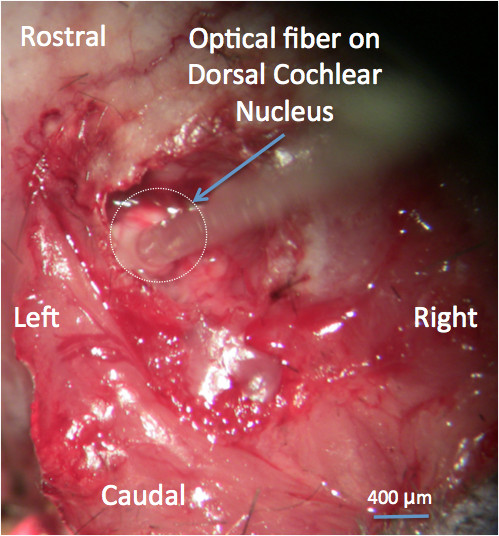 Figure 2: Exposure of the surface of the cochlear nucleus for stimulation with blue light laser to produce an optically-evoked auditory brainstem response. Placement of optical fiber coupled to a blue light laser on the surface of the dorsal cochlear nucleus allows for optical stimulation of the opsin-infected dorsal cochlea nucleus. Blue bar = 400 µm.

Bleeding is a major drawback of the direct visualization approach and principally occurs during the initial craniotomy and after cerebellar aspiration. In many cases during the initial craniotomy, bleeding will stop with time within 2-5 min. Placing a tissue paper or dental point at the site of bleeding and allowing for hemostasis. In terms of bleeding after cerebellar aspiration, it is important to inject normal saline (0.5-1 cc) at the site of the craniotomy to dilute the blood and prevent blood clot formation at the level of the CN. A combination of suction and gentle dental point dabbing may be used to clear away blood and saline. Indeed, the major limitation of this approach is the invasive nature of the procedure.

The protocol has implications beyond manipulation of the auditory system. In vivo gene transfer into the central nervous system enables manipulation of diverse neural pathways and has offered insights into multiple neural functions, including memory, motor control, olfaction, and audition.16,21-26 The surgical approach, enabling direct visualization for the purposes of gene transfer and stimulation may potentially be applied to other regions of the brainstem, both those listed above and others. Following mastery of direct visualization of the DCN, a host of experiments are possible, including injection of opsins into the CN and subsequent stimulation with a blue light laser. Other neurophysiology experiments, such as electrical stimulation and neural injector tracings,18 are also feasible. The level of visualization and the duration of stimulation of this approach allows for multiple applications for a wide range of experiments. 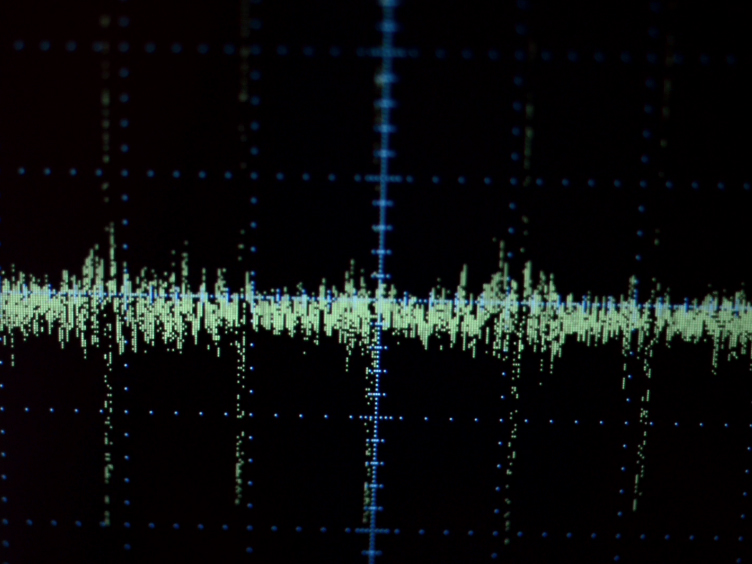