Gene targeting is a critical approach for characterizing gene functions in modern biomedical research. However, the efficiency of gene targeting in human cells has been low, which prevents the generation of human cell lines at a desired rate. The past two years have witnessed a rapid progression on improving efficiency of genetic manipulation by genome editing tools such as the CRISPR (Clustered Regularly Interspaced Short Palindromic Repeats)/Cas (CRISPR-associated) system. This manuscript describes a protocol for generating lineage specific human induced pluripotent stem cell (hiPSC) reporters using CRISPR/Cas system assisted homologous recombination. Procedures for obtaining necessary components for making neural lineage reporter lines using the CRISPR/Cas system, focusing on construction of targeting vectors and single guide RNAs, are described. This protocol can be extended to platform establishment and mutation correction in hiPSCs.

CRISPR (Clustered Regularly Interspaced Short Palindromic Repeats)/Cas (CRISPR-associated) system, together with other genome editing tools, has revolutionized the human genome manipulation in recent years1-7. Major components in the CRISPR/Cas9 system are single guide RNA (sgRNA) and Cas9. Cas9 is an RNA-guided type II DNA endonuclease. It has two nuclease domains, HNH and RuvC, which are responsible for making DNA double-stranded breaks (DSBs) at a specific genomic region next to a protospacer adjacent motif (PAM)7-10.An sgRNA has a combined function of that of crRNA and tracrRNA, two adaptive immunity RNA molecules identified in bacteria (such as Streptococcus pyogenes) and archaea to fight against DNA invasion of exogenous sources9-11. When appropriately designed and co-introduced to mammalian cells, the sgRNA recognizes the PAM sequence, base-pairs with the complementary strand of target DNA, and guides and transactivates Cas9 to cleave at both DNA strands immediately upstream of PAM7. Subsequently, homologous directed recombination (HDR, in the presence of a targeting vector) or non-homologous end joining (NHEJ) will occur to repair the DSBs. Transgenes such as cDNAs, reporter cassettes, or antibiotic resistant fragments can be integrated, and transgenic or knockin lines made.

Although the CRISPR/Cas9 system is highly efficient and relatively specific, undesired off-target activities have been reported12-15. To minimize off-target events, Cas9 nickases (Cas9n) have also been engineered9,10,14,16,17. Cas9n (Cas9 D10A or Cas9 H840A) is Cas9 enzyme with mutations at one of the two nuclease domains, which only elicits a nick at one strand of DNA. To achieve cleavage at both strands, two sgRNAs are designed to guide a pair of nickases, which cuts separately at nearby loci of the two different DNA strands. The “double nicking” strategy requires a more stringent design than the conventional Cas9 platform, and offers both high efficiency and high specificity for gene editing experiments.

This manuscript describes a protocol for generating lineage specific human induced pluripotent stem cell (hiPSC) reporter using CRISPR/Cas system assisted homologous recombination. Steps for obtaining the necessary components for making neural lineage reporter lines using the CRISPR/Cas system mediated genome editing are described, with a focus on construction of targeting vectors and sgRNAs. This protocol has been successfully repeated in multiple hiPSC lines including those derived from healthy individuals and from patients with CNS diseases. Genes targeted in our laboratory include OLIG2, HB9 (MNX1), NEUROG2, SOX1, ALDH1L1 and SOD1. Targeting efficiency from CRISPR/Cas system mediated homologous recombination in hiPSCs ranges from 20-40%, which is consistent with previous reports1,18,19. Compared to a typical efficiency of 1-2% in conventional gene targeting experiments, the targeting efficiency is significantly improved.

2. Design and Vector Construction of sgRNAs for CRISPR/Cas9 System.

Note: Potential off target sites can be predicted using an online open source tool called CasOT17, which is a Perl based program.

Targeting vectors with all necessary components including homology arms, reporter cassette, positive and negative selection cassettes are constructed (Figure 1). Based on the endogenous genomic locus, multiple (2 to 3) sgRNAs (if using the Cas9 system) or sgRNA pairs (if using the Cas9n double nickase strategy) are designed and constructed into human-gRNA-expression vector MLM3636 or pX335-U6-Chimeric_BB-CBh-hSpCas9n (D10A) backbones (Figure 2). Before transfecting hiPSCs, the sgRNAs are evaluated in 293FT cells by T7E1 assay (Figure 3). Off-target sites are predicted. sgRNAs with modest cleavage efficiency (indel% between 10-30%) and fewer potential off-target sites as predicted by in silico procedure (Step 5) will be used to transfect hiPSCs by electroporation. After successful transfection and selection, positive clones are identified. If needed, PCR of potential off-target sites are performed using the genomic DNA isolated from positive clones. Sequencing or T7E1 assay will be performed to determine whether there are off-target events.

Figure 1. Design of targeting vector and sgRNA for making knockin ALDH1L1-GFP reporter. ALDH1L1 genomic sequence is tagged by GFP connected by T2A. The endogenous ALDH1L1 gene is intact and both ALDH1L1 and GFP are driven by the endogenous ALDH1L1 promoter. A floxed neomycin cassette is used for positive selection. Tk6 cassette outside of 3’ homology arm is for negative selection. 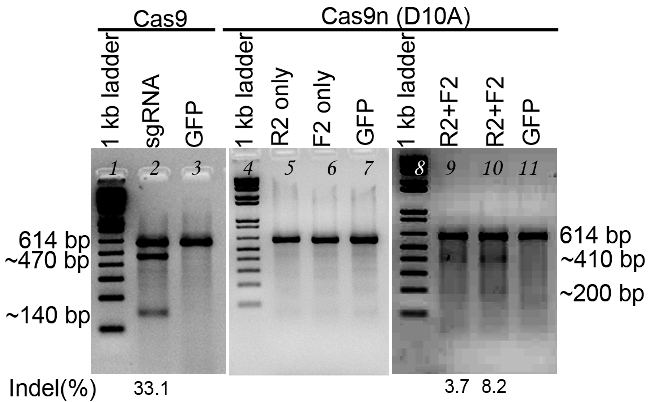 Figure 3. Evaluation of sgRNA mediated cleavage using T7E1 assay. Lanes 1~3 are transfected with Cas9 expression vector, and Lanes4~11 are transfected with Cas9n (D10A) nickase expression vector. Lanes 1,4 and 8, 1 kb DNA ladder; Lane 2, sgRNA for OLIG2 targeting using Cas9; Lanes 3, 7, and 11, GFP control; Lane 5, sgRNA binding sense strand only; Lane 6, sgRNA binding antisense strand only; Lanes 9 and 10, a pair of sgRNAs for both DNA strands. The sgRNAs are designed for targeting the human OLIG2 gene. PCR products are denatured and re-annealed. T7E1 is added to digest the heteroduplex DNA. The undigested PCR product is about 614 bp. After digestion, in the reaction for Lane 2, a portion of PCR products are digested into two bands, ~470 bp and ~140 bp, with an indel of 33%. In the reactions for Lanes 9 and 10, the two digested bands are ~410 bp and ~200 bp, with indels of 3~8%.

The CRISPR/Cas9 system can serve a variety of genetic engineering needs in hiPSCs. It can be used to make knockout and knockin (e.g., reporter) lines, inducible platform lines, as well as mutation correction. Depending on the purpose of genetic modifications, the corresponding targeting vectors may be designed and constructed, so that homologous directed recombination (HDR) other than the error-prone non-homologous end-joining (NHEJ), occurs after DSB is induced by Cas9. If the purpose is to generate missense mutations at certain locus, transfection of sgRNA and Cas9 is sufficient and targeting vectors are not necessary.

For every GOI or specific locus to be targeted, usually it would not be difficult to locate PAM (NGG) sequences, and 2 to 3 sgRNAs are therefore designed accordingly, so that the “best” or the most suitable one can be selected after being evaluated by T7E1 or SURVEYOR assay. However, because the 20-nucleotide sequence within the sgRNA that directs the cleavage of Cas9 can tolerate up to 5 mismatches16, potential off-target mutations might occur12-15. More complex designs are required for sgRNAs used in the more specific double nickase Cas9n (D10A) platform, as there are serious design constraints for using the Cas9n (D10A) with 2 sgRNAs as a 'paired nickase' system, and special attention is needed for identifying PAMs from both DNA strands. First, the distance (offset) between PAMs from both strands should be less than 100 bp with an optimal spacing of 10~30 bp 16,17. Second, nickases targeting PAMs with tail-to-tail (facing-out) orientation with appropriate spacing usually yield expected cleaving activity, while nickases designed for PAMs with head-to-head (facing-in) orientation rarely have expected cleavage as shown by T7E1 assay16. In addition, previous report has shown that although the double nickase strategy reduces, it does not completely eliminate, off-target events. Therefore, off-target sites are critical considerations to be kept in mind and in silico prediction should be performed for every sgRNA. Potential off-target sites need to be monitored for mutations once the reporter hiPSC lines are made.

This work was supported by the Department of Neurosurgery, Memorial Hermann Foundation Staman Ogilvie Fund, the Bentsen Stroke Center at the University of Texas Health Science Center at Houston, and Mission Connect TIRR Foundation. 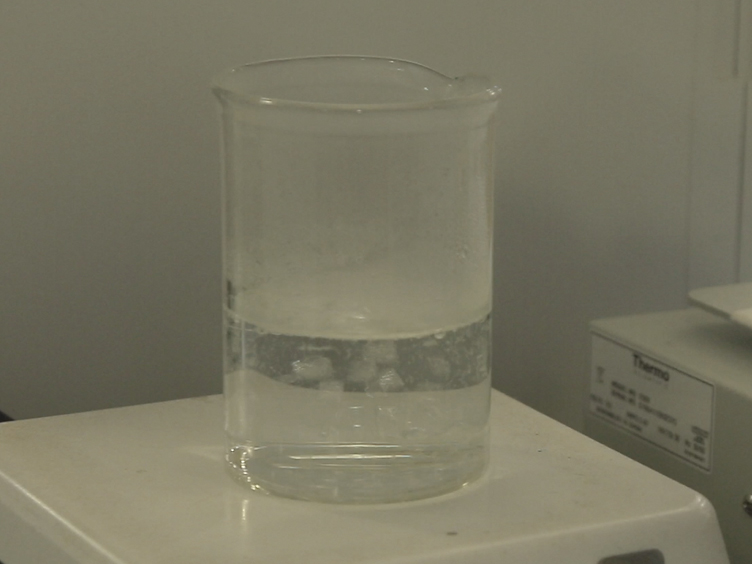