Despite huge efforts to decipher the anatomy, composition and function of the brain, it remains the least understood organ of the human body. To gain a deeper comprehension of the neural system scientists aim to simplistically reconstruct the tissue by assembling it in vitro from basic building blocks using a tissue engineering approach. Our group developed a tissue-engineered silk and collagen-based 3D brain-like model resembling the white and gray matter of the cortex. The model consists of silk porous sponge, which is pre-seeded with rat brain-derived neurons, immersed in soft collagen matrix. Polarized neuronal outgrowth and network formation is observed with separate axonal and cell body localization. This compartmental architecture allows for the unique development of niches mimicking native neural tissue, thus enabling research on neuronal network assembly, axonal guidance, cell-cell and cell-matrix interactions and electrical functions.

The central nervous system (CNS) can be affected by a variety of disorders involving vascular, structural, functional, infectious or degenerative. An estimated 6.8 million people die every year as a result of neurological disorders, which represents a growing socioeconomic burden worldwide1. However, only few of the disorders have available treatments. Therefore, there is a critical need for innovative therapeutic strategies for patients suffering from neurological disorders. Unfortunately, many CNS-targeted therapeutics fail during clinical trials, in part due to the utilization of inadequate pre-clinical research models, which do not allow assessment of acute and chronic impacts with physiologically-relevant functional readouts.

Despite significant research efforts over the past decades, there is a vast amount unknown about the structure and function of CNS. In order to gain more knowledge, animal models are frequently used to model pathological states, such as traumatic brain injury (TBI) or dementia, especially in pre-clinical studies. However, animals differ significantly from humans both in anatomy of CNS, as well as in function, gene expression and metabolism2-4. On the other hand, 2D in vitro cultures are the common method to investigate cell biology and are routinely used for drug discovery. However, 2D cell cultures lack the complexity and physiological relevance as compared to human brain5-7. While there is no substitute for the low cost and simplicity of 2D cell culture studies or the complexity provided by animal models, 3D tissue engineering could generate improved research models to close the gap that exists between the 2D in vitro and in vivo approaches. 3D tissue engineering provides more physiologically-relevant experimental conditions achieved by 3D cell-cell interactions and extracellular cues provided by the biomaterial scaffolds. Despite the significant evidence behind the value of 3D cultures, there are currently only a few 3D CNS tissue models such as stem cell-derived organoid cultures8-10, neurospheroids11 and dispersed hydrogel cultures12,13. Advanced technical methods including multilayer lithography14, and 3D printing15 have been utilized for studying lung, liver, and kidney tissue. However, there is lack of 3D CNS models that allow for compartmentalized neuronal growth, such as mimicking the cortical architecture and biology. Separated growth of neurites from neuronal cell bodies has been previously demonstrated in 2D cultures by using microfabrication16,17 allowing the study of axon tract tracing, calcium influx, network architecture and activities. This idea inspired us to develop a 3D polarized neural tissue where cell bodies and axonal tracts are located in different compartments mimicking the layered architecture of the brain18. Our approach is based on the use of unique silk scaffold design which accommodates high density of cells in a confined volume and allows outgrowth of dense axonal network into a collagen gel. Here we demonstrate the full assembly procedure of brain-like tissue including the scaffold fabrication and neuronal culture.

Solid silk sponges precut to the donut shape represent a unique and simple idea to achieve a compartmentalized architecture resembling neural tissue (Figure 2A). The highly porous structure of the scaffold with the pore size of about 500 µm results in exceptionally high surface area allowing the seeding and growth of high cell density within a small volume (2x107/ml) (Figure 2B). Additionally, the high porosity of the scaffold allows for unrestricted diffusion of nutrients and wastes resulting in superior viability of dense cell cultures over extended time frames. Upon seeding the neurons rapidly and uniformly attach to the surface of the scaffold pores.

After cell attachment is complete and cells are equilibrated on the silk substrate, the sponge scaffold is filled with the soft collagen matrix in order to provide a 3D environment for axonal network formation (Figure 3). In the absence of the collagen matrix the compartmentalization of axons and cell bodies is not possible as neurons grow extensions only on the surface of the pores resulting in mixed networks as found with 2D surfaces (Figure 3B). In contrast, the collagen gel provides a meshwork which supports extensive axonal outgrowth in 3D, while neuronal cell bodies remain attached to the silk scaffold (Figure 3C). This growth pattern leads to compartmentalization of cell bodies and pure axonal networks (Figure 3D), which resembles the gray and white matter of the cortex in the brain.

Apart from microscopy, the constructs can be evaluated with a variety of other methods18, depending on the question behind the experiment. For example, the isolation of DNA, RNA and protein from the constructs can be easily performed using commercial kits (Figure 4). The yield of nucleic acids and protein per construct depends on the number of cells initially seeded on the silk scaffolds. The more cells seeded the higher the yield of DNA, RNA and protein. 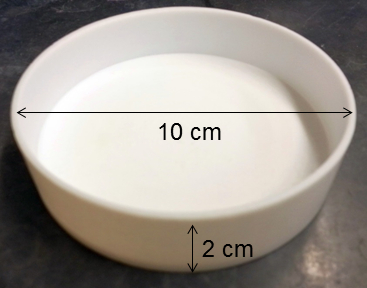 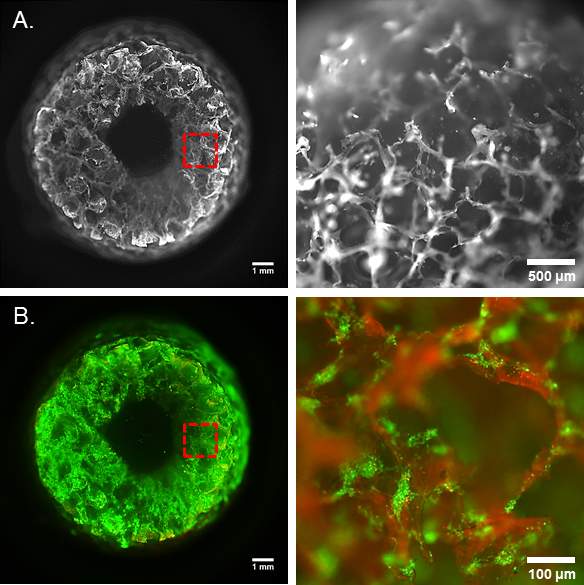 Figure 2. 3D brain-like tissue model. (A) Porous silk sponge scaffold. (B) Live/dead staining of neurons at day 1 upon seeding on silk scaffold before collagen embedding (green-live cells, red-dead cells). Panels on right side show the magnification of area captured in red frames. Please click here to view a larger version of this figure. 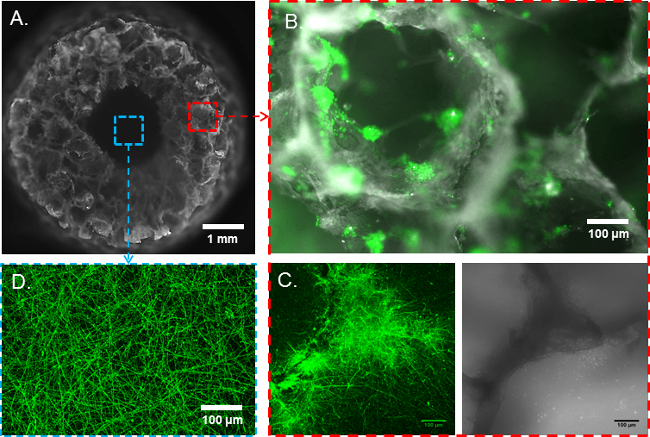 Figure 4. Expected yield of (A) RNA and DNA, and (B) protein per construct in relation to the amount of cells seeded per scaffold (±SD, n=5). Please click here to view a larger version of this figure.

The donut-shaped silk protein-based tissue model allows for modifications and tuning of mechanical properties, versatile structural forms, hydrogel fillers and cellular components. Thus, this tissue model establishes a base platform for a wide range of studies. Silk is a favorable candidate for biomaterial platforms due to its biocompatibility, aqueous-based processing, and robust mechanical and degradation properties22. The silk matrix also serves as a stable anchor to reduce collagen gel contraction over time in culture. The properties such as silk concentration and porosity of the scaffold used in this model have been previously adjusted to achieve optimal cell growth and mechanical properties resulting in brain-like tissue elasticity18,23,24. We suggest to keep these parameters constant to ensure the successful outcome and reproducibility of the experiments.

The 3D neuronal network formation was achieved by combining two types of biomaterials with different mechanical properties: a stiff scaffold to provide neuronal anchoring and a softer gel matrix to permit axon penetration and connectivity in 3D. Selective material preferences of the silk scaffold and soft hydrogel provide the underlying principle for compartmentalizing the neurons from the axonal connections. Due to the inert nature of the silk scaffold, functionalization with poly-D-lysine is required for neuronal attachment. However, other cell adhesion promoting factors can be applied such as RGD25 or fibronectin26. To achieve the 3D network formation the silk scaffold needs to be filled with hydrogel in a timely manner as soon as neurons are attached to the scaffold. Likewise, the collagen matrix filler can be replaced by other hydrogels, thus allowing the study of the influence of 3D extracellular environments on axonal network formation to serve as a platform to evaluate novel hydrogels in terms of neuronal compatibility. Additionally, apart from rat cortical neurons other neuronal sources such as hippocampal neurons or induced pluripotent cell (iPSc)-derived neurons can be utilized. Moreover, the tissue model can be used to study heterocellular interactions by including glial cells along with neurons and to build more complex brain-like tissue.

As shown previously, our model can be utilized to evaluate neuronal functionality in 3D microenvironment with a variety of assays such as cell viability, gene expression, LC-MS/MS and electrophysiology, thus demonstrating physiological relevance of the model18. Other methods, which are frequently utilized to evaluate 3D tissue-engineered constructs, such as immunostaining and microscopy8,9,11 can also be used to assess cell distribution and extent of axonal network formation. However, it has to be noted, that due to the high density of the collagen matrix, the penetration of antibodies and depth of the imaging is limited to few hundred micrometers. Moreover, the signal to noise ratio may be affected by nonspecific background fluorescence. This can be overcome by using lipophilic cell tracers and genetically expressed fluorescent proteins which diminish the need for immunostaining11. Alternatively, the imaging can be performed with 2-photon microscopy instead of usual one-photon technique, which may reduce the signal loss, photobleaching, and can be extended to several hundred micrometers of depth.

Summarizing, the silk and collagen-based brain-like tissue offers a robust platform to study neuronal networks in 3D and is a starting point for the development of more advanced models of neurological disorders in the future. Independent from the mode of evaluation, the relative simplicity of this tissue model supports its utility, success and reproducibility.

Publication of this video-article is sponsored by Corning. 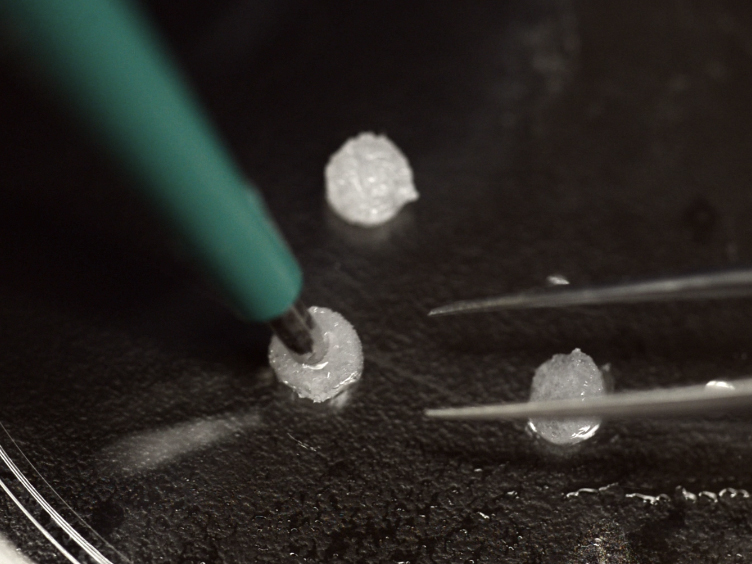