High-resolution episcopic microscopic (HREM) technology enables rapid acquisition of high-resolution digital volumetric and three-dimensional (3D) morphometric data. Here, we describe the detailed protocol to image the entire mouse embryo. The protocol consists of four major sections: sample preparation, embedding, image acquisition and finally, 3D visualization. The technology requires specimens to be stained with a fluorescent dye, which can be problematic for large or dense specimens. To overcome this limitation, we have improved the existing protocol to enhance tissue penetration of the dye by pretreating the specimen with a solution containing urea and sodium dodecyl sulfate. The protocol uses only routine laboratory equipment and reagents for easy adaptation in standard laboratory settings. We show that the resulting high-resolution 3D images faithfully recapitulate the detailed morphologic features of the internal organs of mouse embryos, thereby permitting morphometric analyses. Together, we present a detailed and improved protocol using standard laboratory equipment to acquire high-resolution 3D images of small and large sized specimens.

Both EFIC and HREM methods require specimens to be embedded in the suitable medium. EFIC detects autofluorescence emitted from the embedded tissue. Because of this, it is limited to specimens emitting high levels of autofluorescence but not those with relatively weak autofluorescence such as early stage embryos9. To overcome the dependency of autofluorescence, specimens are stained with a fluorescent dye such as eosin for HREM imaging. The choices of dyes and staining methods also make HREM more compatible to detect molecular signals in the context of tissue architecture and morphology4,10.

In this article, we present an improved HREM protocol suitable for whole body assessment of the late stage mouse embryos. To facilitate staining, we include a pretreatment step to increase tissue penetration, thereby enabling HREM imaging of older mouse embryos.

All animal uses are approved by the Institutional Animal Care and Use Committee at Boston Children's Hospital.

We have reported high quality HREM images of mouse embryos between e9.5 and e13.58. Image quality of the late staged embryos, however, is significantly compromised because of the limited tissue penetration of the fluorescent dye eosin. To increase the staining efficiency, we have tested several pretreatment methods that are compatible to fluorescent imaging11. Specifically, the e15.5 mouse embryos were treated with either Sca/e A212 or Whole-Body CUBIC13. We have also tested the simplified formula, the Clearing Solution (4 M urea, 10% glycerol and 4% sodium dodecyl sulfate). All pretreatment methods increased staining efficiency. Embryos became translucent after 1 week of treatment with the Clearing Solution. No obvious tissue damage was detected after the treatment. The pretreated embryos were processed through steps including dehydration, staining and infiltration before being embedded in the plastic embedding media. HREM images were acquired from the embedded specimen as described above in section 3 (Image Acquisition) and displayed using a 3D visualization software. An example of whole mount surface view of e15.5 embryo demonstrated detailed morphological features of the skin including whiskers pads and developing hair follicles (Figure 1). Resolution of the virtual section view was comparable to histological section (Figure 2). 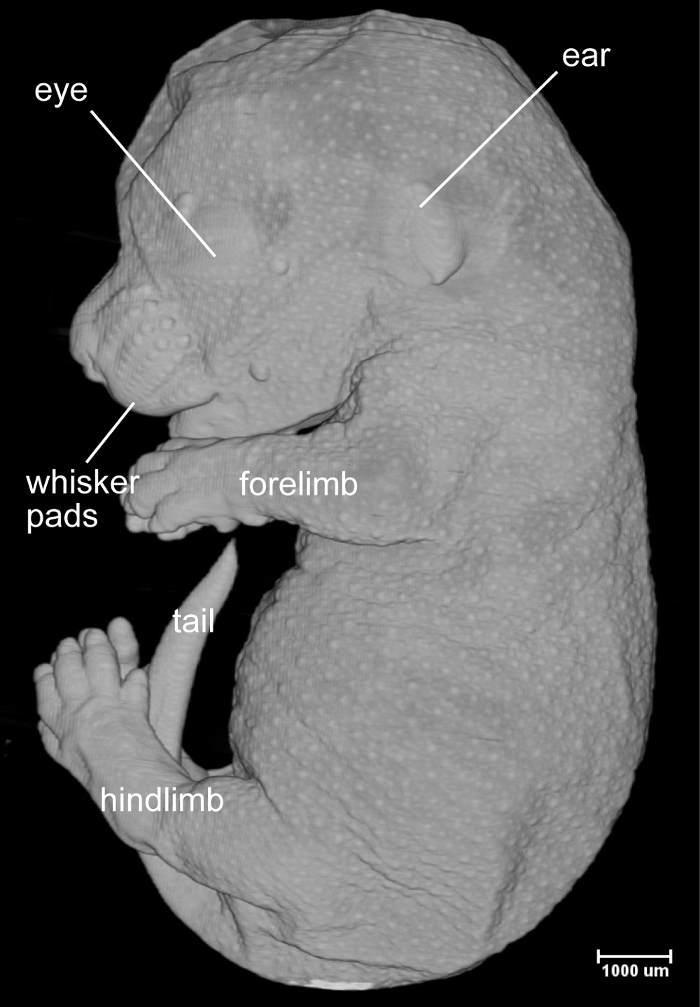 Figure 1: 3D Surface View of the e15.5 Embryo. It shows the detailed morphological features of the skin. The developing hair follicles (small white dots) are apparent, demonstrating high-resolution of the image. Please click here to view a larger version of this figure. 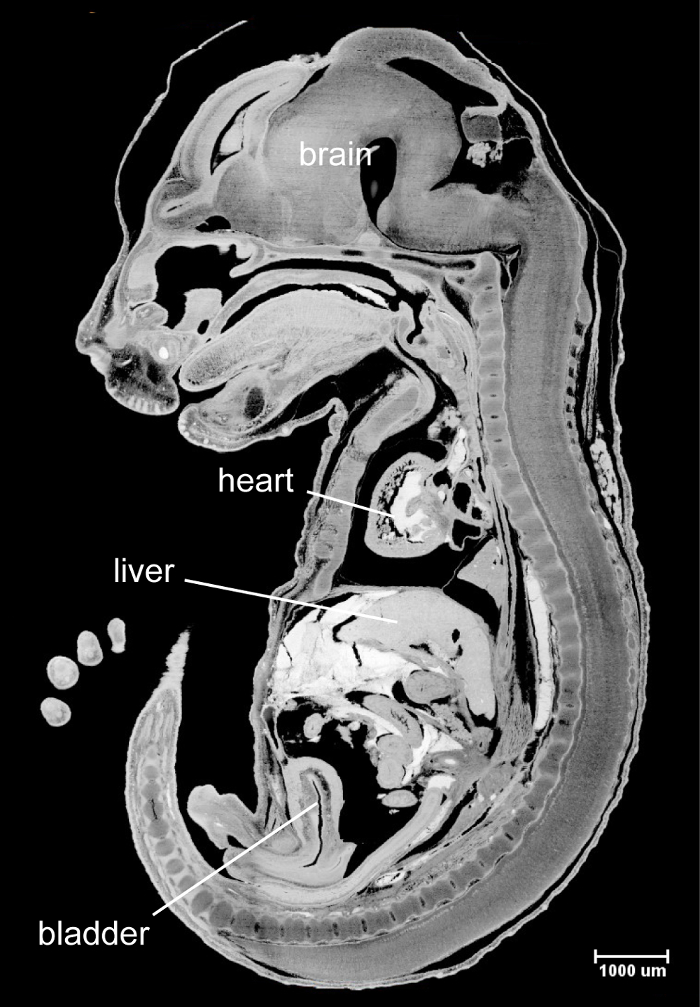 Figure 2: The Virtual Section View of Midline Section of the e15.5 Embryo. The internal structures, including the heart, liver, gut and bladder are clearly visible. Please click here to view a larger version of this figure.

Here, we present a modified protocol using routine laboratory equipment to acquire serial HREM images that are compatible for rapid 3D visualization and morphometric analysis of complex structures. Because the high-resolution images are taken directly from the block face instead of individual sections, the fine morphological features are preserved and rapidly reconstructed digitally in a 3D visualization program.

3D imaging offers significant advantages in visualizing and understanding complex morphological features. Most 3D imaging technologies depend on specialized equipment1-4. In contrast, EFIC and HREM imaging only utilize standard laboratory equipment including a stereomicroscope equipped with a digital camera and a microtome14. Functional coupling between microscope and microtome enables automation of image acquisition enables automation of the entire image acquisition process. However, we have shown that functional coupling is not obligatory8. Instead, we simply mount the stereomicroscope horizontally so that it faces directly to the block face of a standard microtome at the resting stop position. The major limitation of this simple setup is that the HREM images have to be taken manually. We have estimated that it takes approximately 5 sec per image on average. Another limitation is that individual image may shift from one position to another but this is not an issue because they are readily realigned during 3D reconstruction.

Using the HREM technology, we have analyzed a series of 3D images of mouse embryos from e9.5 to e13.5, and uncovered a novel mechanism by which the solitary embryonic cloaca transforms into two separate structures, the distal digestive tract and the lower urinary tracts8. Quality of the HREM images of late staged embryos is limited due to inefficient penetration of eosin (data not shown). To increase tissue penetration of e15.5 and e18.5 embryos, we have used two different pretreatment methods that are compatible to fluorescent imaging11 and tested a new formula, the Clearing Solution (4 M urea, 10% glycerol and 4% SDS). All of these methods have shown significant improvement of tissue penetration and eosin staining. An important consideration before and after pretreatment is that the specimen is prone to skin swelling or shrinking due to osmotic pressure. To limit the sudden change of osmotic pressure thereby reduce tissue deformation, we recommend gradual exchange of the solution. In addition, we found that inclusion of ethanol helps significantly (the step 1.5.4). During infiltration and embedding steps, it is important to keep the specimen from light and at 4 ˚C.

Collectively, this protocol uses routine laboratory equipment to acquire HREM images, which is compatible for high-resolution 3D visualization and morphometric analysis. The protocol should be readily adapted in any standard laboratory setting. 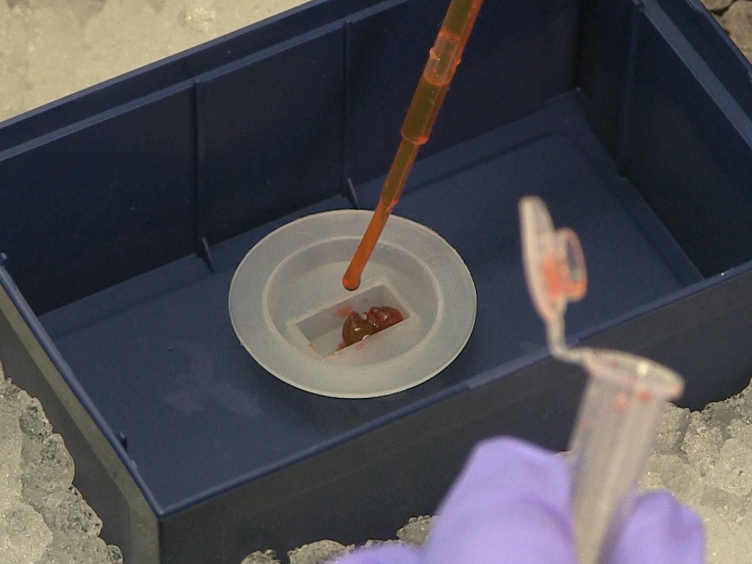