Nuclear factor 90 (NF90) and RNA-binding motif protein 3 (RBM3) have been previously demonstrated as interacting partners. They are predominantly localized in the nucleus, but also migrate into the cytoplasm and regulate signaling pathways in the cytoplasmic compartment. Here, we compared NF90-RBM3 interaction in both the nucleus and the cytoplasm by co-immunoprecipitation and proximity ligation assay. In addition, we discussed the advantages and limitations of these two techniques in visualizing protein-protein interactions in respect to spatial distribution and the properties of protein-protein interactions.

Nuclear factor 90 (NF90) is a multi-isoform protein with numerous functions including the response to viral infection, regulation of interleukin-2 post-transcription and regulation of miRNA biogenesis 1-3. RBM3 is an RNA-binding protein, involved in translation and miRNA biogenesis and can be induced by various stressors including hypothermia and hypoxia 4-6. Recently, we found NF90 and RBM3 in a protein complex 7. The interaction of NF90 and RBM3 is essential to modulate protein kinase RNA-like endoplasmic reticulum kinase (PERK) activity in unfolded protein response 7. Both NF90 and RBM3 are located predominantly in the nucleus but a small proportion of NF90 and RBM3 shuttle into the cytoplasm and bind there to each other for specific functions, e.g. to regulate PERK activity. Therefore, it is important to visualize the distribution of NF90-RBM3 interactions in the subcellular compartment, which may indicate their various roles in respective compartment.

Decades ago, yeast two hybrid (Y2H) was developed to detect the interaction between two proteins 8. However, due to artificial construction of fused proteins, false positive results have restricted the application of this method. For a long time, co-immunoprecipitation was the main technique to analyze protein-protein interactions, especially in endogeneous conditions 9. To analyze the co-immunoprecipitated protein complex, Western blot is the most convenient technique, while mass spectrometry is used when super sensitivity and accuracy are desired. In recent years, proximity ligation assay has been developed as a novel method to detect protein-protein interactions in both cells and tissues in situ 10,11.

Here, we compared the most popular co-immunoprecipitation method and relatively novel proximity ligation assay method in capturing NF90-RBM3 interaction in subcellular fractions. We also discussed the advantages and limitations of both techniques.

Figure 1 demonstrates that NF90 and RBM3 are both nuclear proteins and only a small fraction is present in the cytoplasm. Notably, there are three different bands stained positive for RBM3. The smallest just below 20 kDa reflects the correct size of RBM3 (the predicted molecular weight of RBM3 is 17 kDa). The origin of the two other bands remains to be investigated. Co-immunoprecipitation experiments with RBM3 as the bait protein revealed that NF90-RBM3 interactions are predominantly present in the nucleus and a minority in the cytoplasm. Co-immunoprecipitation data supports the localization of each single protein.

As shown in Figure 2A, NF90 and RBM3 are mainly located in the nucleus but also in the cytoplasm in situ. Both proteins show perfect co-localization in both compartments. Proximity ligation assay revealed the pattern of NF90-RBM3 interactions, which is very similar to conventional immunocytochemistry, with most interactions in nucleus in majority of cells. Only a small proportion of cells demonstrated predominantly cytoplasmic distribution of NF90-RBM3 interactions. 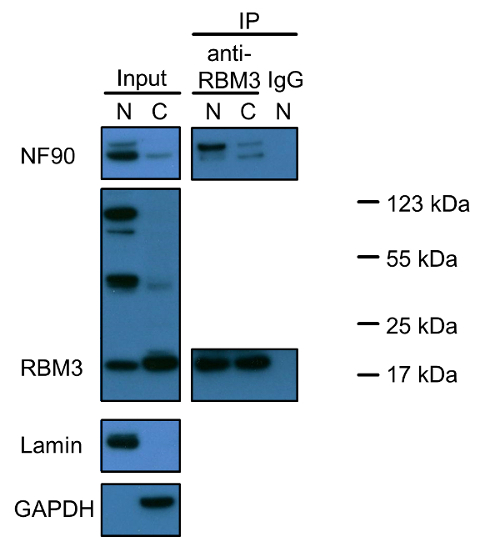 There are several benefits as well as shortcomings for both methods. As a relatively novel technique, an obvious advantage of proximity ligation assay is the feasibility to elucidate protein-protein interactions at single-cell level instead of a batch of heterogeneous cells. Images with high magnitude and resolution (e.g. by confocal microscope) provide the possibility for quantification by counting single fluorescent spots. In contrast, the conventional combination of co-immunoprecipitation technique with Western blot can only semi-quantify protein bands, mainly because a suitable loading control is difficult to determine for IP samples. In addition, when protein-protein interaction is weak or transient, a large amount of biological material, e.g., cells or tissues, is required for co-immunoprecipitation or an artificial overexpressing system with fused tag is applied to enhance the chance to detect the interactions. Alternatively, detection techniques with high sensitivity such as mass spectrometry can improve the experiment quality. However, in respect to the amount of starting material the proximity ligation assay method has clear advantages. Only a few cells are required, provided a high quality of antibodies is given. Furthermore, in tissue samples, in situ visualization of protein-protein interactions in different tissue structures and cell types can be achieved by proximity ligation assay, in a similar pattern as normal immunohistochemistry. In contrast, co-immunoprecipitation is by its nature unsuited to display the spatial distribution of protein-protein interactions.

In cells with large nuclei but small cytoplasmic compartments, the proximity ligation assay method is limited in analyzing nuclear-cytoplasmic distributions and traditional co-immunoprecipitation has its own superiority. For example, in T lymphocyte cell lines, e.g. Jurkat cells, nuclear-cytoplasmic distributions of NF90-RBM3 interaction by proximity ligation assay technique is restricted, because the nucleus occupies almost the whole space inside the cell, and it is difficult to identify the boundary of the cytoplasmic compartment. This can be a common problem for immunocytochemistry in general, when the nucleus-cytoplasm ratio is extremely unbalanced. However, co-immunoprecipitation in this situation is not subject to this limitation.

Another issue deserving special attention is the specificity of primary antibodies and the possibility of protein isoforms, precursors and protein aggregates. We observed by Western blot that the long NF90 isoform, NF110, is much less abundant in both nucleus and cytoplasm in HEK293 cells as compared to NF90 (Figure 1). However, co-immunoprecipitation unraveled a higher binding affinity of NF110 to RBM3 particularly in nucleus. Three main bands were discovered in RBM3 blots in nucleus, but only the 20 kDa normal RBM3 band was mainly observed in cytoplasm. Whether the other two 50 kDa and 100 kDa bands reflect RBM3 isoforms, precursors, protein aggregates with bound RBM3 or were due to unspecific background remain to be elucidated. Instead, since the proximity ligation assay is based on immunostaining, the proximity ligation assay cannot distinguish the difference among different protein isoforms, precursors, aggregates or unspecific staining, while co-immunoprecipitation can provide more information on antibody specificity or protein isoforms and precursors than the proximity ligation assay in investigating protein-protein interactions. Regarding RBM3, when considering all three RBM3 bands observed in nucleus, the Western blot result is consistent with a predominant nuclei localization of RBM3 observed by immunostaining. 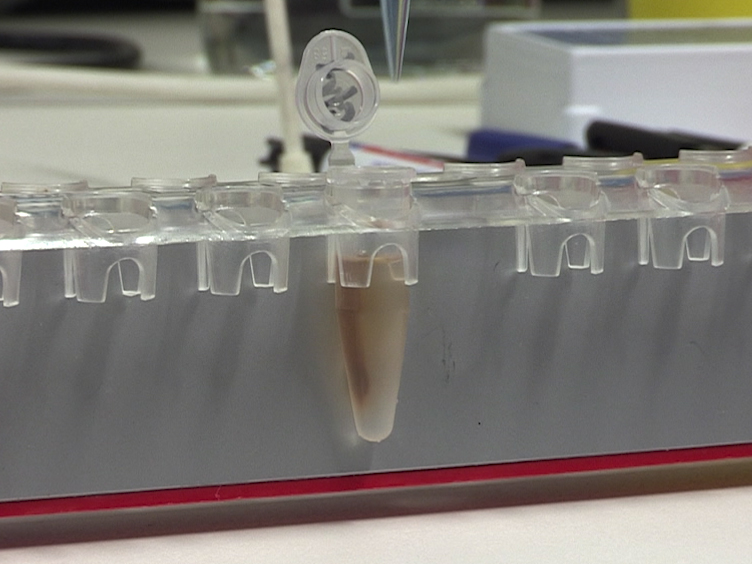