Here we present a luciferase-based biosensor to quantify the kinase activity of large tumor suppressor (LATS)-a central kinase in the Hippo signaling pathway. This biosensor has diverse applications in basic and translational research aimed at investigating Hippo pathway regulators in vitro and in vivo.

The Hippo signaling pathway is a conserved regulator of organ size and has important roles in the development and cancer biology. Due to technical challenges, it remains difficult to assess the activity of this signaling pathway and interpret it within a biological context. The existing literature on large tumor suppressor (LATS) relies on methods that are qualitative and cannot easily be scaled-up for screening. Recently, we have developed a bioluminescence-based biosensor to monitor the kinase activity of LATS-a core component of the Hippo kinase cascade. Here, we describe procedures for how this LATS biosensor (LATS-BS) can be used to characterize Hippo pathway regulators. First, we provide a detailed protocol for investigating the effect of an overexpressed protein candidate (e.g., VEGFR2) on LATS activity using the LATS-BS. Then, we show how the LATS-BS can be used for a small-scale kinase inhibitor screen. This protocol can feasibly be scaled-up to perform larger screens, which undoubtedly will identify novel regulators of the Hippo pathway.

In brief, in the Hippo pathway, upon activation by upstream regulators (e.g., cell-cell contact, nutrient stress, and extracellular matrix [ECM]), MST1/2 (MST; mammalian homologs of Drosophila Hippo) serine/threonine (S/T) kinases phosphorylate/activate adaptor proteins hMOB1 and WW45, as well as LATS1/2 (LATS) kinases which, subsequently, phosphorylate transcriptional co-activator YAP and its paralog TAZ at conserved HX(H/R/K)XX(S/T) (H, histidine; R, arginine; K, lysine; S, serine; T, threonine; X, any amino acids) motifs, including YAP-S127 and TAZ-S8911,12. S127-phosphorylated YAP (YAP-pS127) and S89-phosphorylated TAZ (TAZ-pS89) are degraded by ubiquitination or bind to cytoplasmic protein 14-3-3 and are prevented from interacting with TEAD1-4 transcription factors in the nucleus to transactivate downstream genes involved in the cell proliferation and apoptosis (Figure 1). Despite the tremendous interest in the Hippo pathway, few tools for measuring Hippo signaling exist and those that do have been historically limited to reporters of YAP/TAZ/TEAD transcriptional output. Indeed, until very recently, there were no tools for measuring the dynamics and activity of the Hippo signaling components in a quantitative, real-time, high-throughput, and non-invasive manner both in vitro and in vivo.

Given our emerging understanding of the role of protein-protein interactions in physiology and pathology, there is great interest in the development of tools that can be used to study these interactions in a quantitative and real-time manner13,14,15,16. Indeed, there has been significant progress in the development of bio-analytical strategies, including the yeast two-hybrid (Y2H)17, the surface plasmon resonance (SPR)18, and Förster resonance energy transfer (FRET)19 assays, to evaluate protein-protein interactions. However, these approaches carry the limitation of requiring significant optimization of the reporter orientation, such that many constructs must be tested to find an efficient one. Further, these approaches also have a relatively low signal-to-noise ratio, such that discerning a true positive signaling can be challenging.

Protein complementation assays were developed to overcome these limitations. The first generation of protein complementation assays was based on split multicolor fluorescence proteins and could not solve the aforementioned limitations20. Multicolor fluorescence proteins consist of only one domain, making it difficult to split them into two separate stable fragments with low affinity and background noise21. Subsequently, firefly luciferase was identified as a new candidate for use in developing split protein complementation assays. In this approach, firefly luciferase is split into two fragments (N-terminal and C-terminal luciferase [NLuc and CLuc]) with each fragment fused to a target protein of interest. If the NLuc and CLuc are brought into proximity upon the interaction of the two target proteins, luciferase activity is reconstituted and bioluminescent light is generated in the presence of luciferin substrate and ATP22. In 2001, by performing a combinatorial screening using a library containing NLuc and CLuc fragments cut at various sites and attached to proteins with different linkers, Paulmurugan and Gambhir at Stanford University developed an optimized split-firefly luciferase fragment-assisted complementation system for protein-protein interactions23. In this system, firefly luciferase is cut at amino acid (aa) 398 to form NLuc and CLuc, which are attached to two proteins of interest using a flexible linker of eight glycine residues and two serine residues.

Using a similar approach, we recently developed a new LATS-BS by fusing NLuc to 15 aa of YAP surrounding the LATS phosphorylation site at S127 (YAP15) and CLuc with 14-3-3. The full-length YAP protein was not used, to avoid confounding signals by post-translational modifications of YAP (e.g., phosphorylation at other sites and ubiquitination) by other upstream regulators. The LATS-BS presented here can non-invasively monitor Hippo signaling activity both in vitro in living cells and in vivo in mice20,24 (Figure 2). Here, we describe a detailed protocol for measuring LATS kinase activity in vitro using the LATS-BS. First, we show how the LATS-BS can be used to investigate the effect of an overexpressed protein on LATS activity. Then, we show how the biosensor can be used to monitor the activity of the Hippo pathway after treatment with agents regulating the Hippo pathway. This protocol could be used to identify and characterize signaling pathways or stimuli regulating LATS kinase activity.

1. Investigation of a Putative Regulator of Hippo Signaling Using the LATS-BS

2. A screen to Identify Hippo Pathway Regulators Using the LATS-BS

The LATS-BS was cotransfected with different genes to evaluate their effect on LATS activity (Figure 3). In this experiment, Renilla was used as an internal control. The transient expression of YAP-5SA, a constitutive active form of YAP, causes increasing levels of YAP transcriptional targets and a subsequent increase in LATS kinase activity through an established feedback pathway25. MST, the upstream activator of LATS in the Hippo pathway (Figure 1), also increases the biosensor signal intensity. However, VEGFR overexpression, which triggers PI3K/MAPK signaling, inhibits LATS and decreases the signal intensity of the LATS-BS.

In the second protocol, LATS-BS was transfected into HEK293AD and, 24 hours after the transfection, cells were passed into 96-well plates. 40 h after the transfection, the cells were treated with different known small molecule regulators of Hippo signaling followed by a luciferase assay (Figure 4). VEGFR, PI 3-kinase, and cellular energy level are three known negative regulators of the LATS kinase24. In this experiment, GDS0941, a PI 3-kinase inhibitor, axitinib and SU4312, inhibitors of VEGFR, and 2-D glucose, which causes energy stress by an inhibition of glucose metabolism and ATP production, were used to activate the LATS-BS. Inversely, LPA, S1P, and TPA were used to inhibit the LATS-BS. This experiment shows that the LATS-BS can be used to measure both the activation and the inhibition effect of a small molecule on the LATS kinase activity.

Table 1: Protocol for making solutions A and B using a polymer-based transfection reagent for investigating a putative regulator of the Hippo pathway with the LATS-BS.

Table 2: Protocol for making solutions A and B using a polymer-based transfection reagent for screening to identify regulators of the Hippo pathway using the LATS-BS. 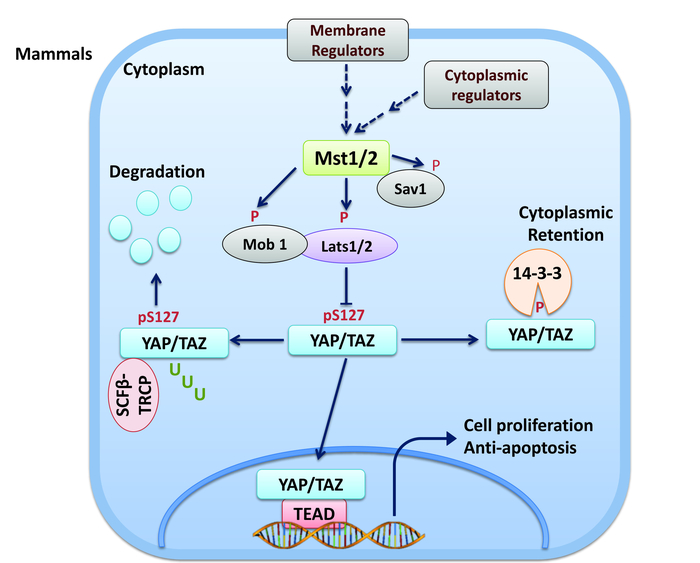 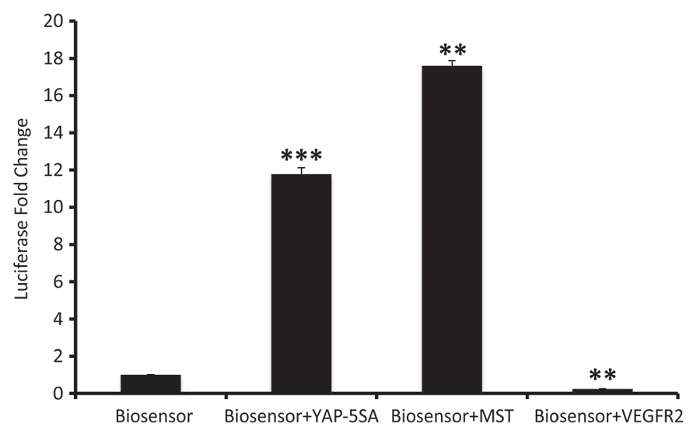 Figure 3: Results from a representative experiment evaluating the effect of a gene on LATS activity. The biosensor can be expressed alone or together with other genes in HEK293AD cells to investigate their effect on LATS kinase activity (mean ± SD; n = 3, **p <0.01, ***p <0.001). Please click here to view a larger version of this figure. 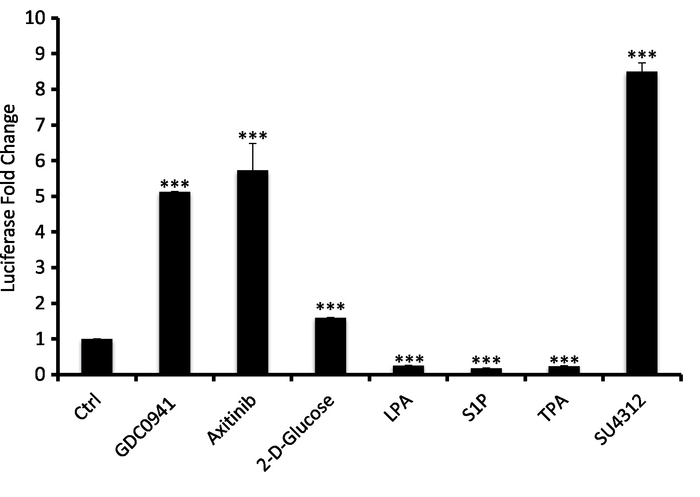 There are several important points that should be considered when using the LATS-BS. First, in our experience, the LATS-BS has the greatest sensitivity when the plasmids used for transfection are extracted fresh from bacteria. Second, the amount of LATS-BS plasmids transfected into cells will affect the LATS-BS sensitivity and signal intensity. The amount of plasmid DNA can be increased to 400 ng/fragment for the LATS-BS and to 600 ng for the gene of interest per well of a 12-well plate. In general, using more plasmid will give a higher signal intensity but less sensitivity. Third, cell confluency can affect the LATS-BS signal background. Consistent with the well-established role of Hippo signaling in cellular responses to confluency, we have observed that cells with higher confluency have a higher background LATS-BS signal due to the activation of endogenous LATS. Accordingly, sparsely-plated cells show a lower LATS-BS background signal. Optimal cell confluency can be selected depending on the purpose of the experiment (high confluency for observing LATS inhibition; low confluency for observing LATS activation). Fourth, Renilla may be used as an internal control for transfection efficiency, and for hard-to-transfect cells (e.g., MCF10A), the transfection reagent:DNA ratio can be modified to 4:1. Finally, we strongly recommend cotransfecting MST2 as a positive control and YAP-S127A as a negative control each time the biosensor is used.

Every tool has its limitations. The LATS-BS is the artificial substrate of an endogenous protein, which can always outcompete the true substrate of the protein of interest. This effect is known as a buffering effect of the biosensor. Improving the biosensor with higher signal intensity and lower expression levels may help to overcome this problem. Another limitation is that feedback pathways may complicate the interpretation of data from the LATS-BS. There are many linear and non-linear interacting signaling pathways that likely influence the LATS-BS signal. The LATS-BS only demonstrates the cumulative effect of a stimulus on LATS kinase activity. It should be noted, however, that that limitation is not unique to the LATS-BS but rather is commonly encountered in studies of molecular biology. Thus, LATS-BS data should be interpreted in the context of multiple probative experiments. 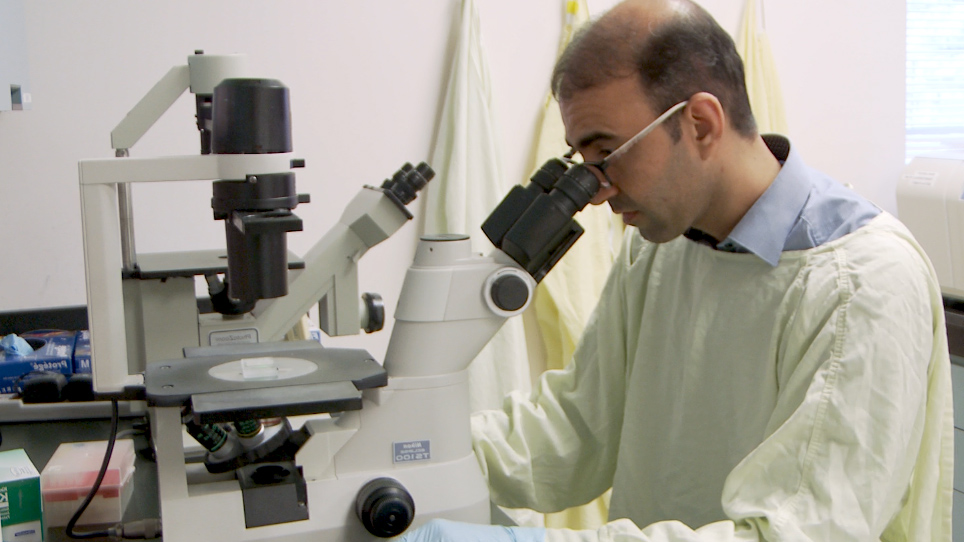