A mouse model of cerebral ischemia-reperfusion is established to investigate the pathophysiology of stroke. We distally ligate the right middle cerebral artery and right common carotid artery and restore blood flow after 10 or 40 min of ischemia.

In this study, a middle cerebral artery (MCA) occlusion mouse model is employed to study cerebral ischemia-reperfusion. A reproducible and reliable mouse model is useful for investigating the pathophysiology of cerebral ischemia-reperfusion and determining potential therapeutic strategies for patients with stroke. Variations in the anatomy of the circle of Willis of C57BL/6 mice affects their infarct volume after cerebral-ischemia-induced injury. Studies have indicated that distal MCA occlusion (MCAO) can overcome this problem and result in a stable infarct size. In this study, we establish a two-vessel occlusion mouse model of cerebral ischemia-reperfusion through the interruption of the blood flow to the right MCA. We distally ligate the right MCA and right common carotid artery (CCA) and restore blood flow after a certain period of ischemia. This ischemia-reperfusion injury induces an infarct of stable size and a behavioral deficit. Peripheral immune cells infiltrate the ischemic brain within the 24 h infiltration period. Additionally, the neuronal loss in the cortical area is less for a longer reperfusion duration. Therefore, this two-vessel occlusion model is suitable for investigating the immune response and neuronal recovery during the reperfusion period after cerebral ischemia.

C57BL/6J (B6) mice are the most commonly used strain in stroke experiments because they can easily be genetically manipulated. Two common models of MCAO/reperfusion that mimic the condition of cerebral ischemia-reperfusion are available. The first is the intraluminal filament model of proximal MCAO, where a silicon-coated filament is employed to intravascularly occlude the blood flow in the MCA; the occluding filament is subsequently removed to restore blood flow3. A short occlusion duration results in a lesion of the subcortical region, whereas a longer occlusion duration causes infarcts in the cortical and subcortical areas. The second model is the ligation model of distal MCAO, which involves extravascular ligation of the MCA and CCA to reduce the blood flow through the MCA, after which blood flow is restored through the removal of the suture and aneurysm clip4. In this model, an infarct is caused in the cortical areas, and the mortality rate is low. Because the ligation of MCAO/reperfusion model requires craniectomy to expose the site of the distal MCA, the site can be easily confirmed, and examining whether the blood flow in the distal MCA is disrupted during the procedure is straightforward.

B6 mice exhibit considerable variations in the anatomy of their circle of Willis; this might affect the infarct volume following cerebral ischemia-reperfusion5,6,7. Currently, this problem can be overcome through ligation of the distal MCA8. In this study, we establish a method for occluding the MCA blood flow and enabling reperfusion after a predetermined period of ischemia. Two-vessel occlusion of the cerebral ischemia-reperfusion model induces transient ischemia of the MCA territory through ligation of the right distal MCA and right CCA, with blood flow restored after a certain period of ischemia.This MCAO/reperfusion model induces an infarct of stable size, a bulk of brain-infiltrating immune cells in the ischemic brain, and a behavioral deficit after cerebral ischemia–reperfusion4.

The institutional animal care and use committees of Academia Sinica and Taipei Medical University approved this protocol for the use of experimental animals.

This MCAO/reperfusion procedure produced a cortical infarct in the vicinity of the right MCA and caused a behavioral deficit. Different degrees of ischemia-induced infarct volume (Figure 1A,B) and neuronal loss (Figure 1C,D) were created in the cerebral cortex of the right MCA area through an increase in ligation duration. This MCAO/reperfusion injury decreased the animal's locomotor activity at 48 h after the MCAO/reperfusion (Figure 2). A bulk of peripheral immune cells (CD45high cells) also infiltrated the ischemic brain (ipsilateral hemisphere) after the cerebral ischemia-reperfusion (Figure 3). In addition, we compared this two-vessel occlusion model with the MCAO model and found that the infarct volumes of these two models were not significantly different (Figure 4). The mortality rate was low (<5%) in the two-vessel occlusion mouse model of cerebral ischemia-reperfusion. We excluded mice from further analyses if excessive bleeding had occurred during the surgery. When the surgical procedures were correctly followed, the rate of animal exclusion due to excessive bleeding from craniectomy or MCA was less than 15%. Occlusion of the right MCA or CCA alone did not cause infarction. 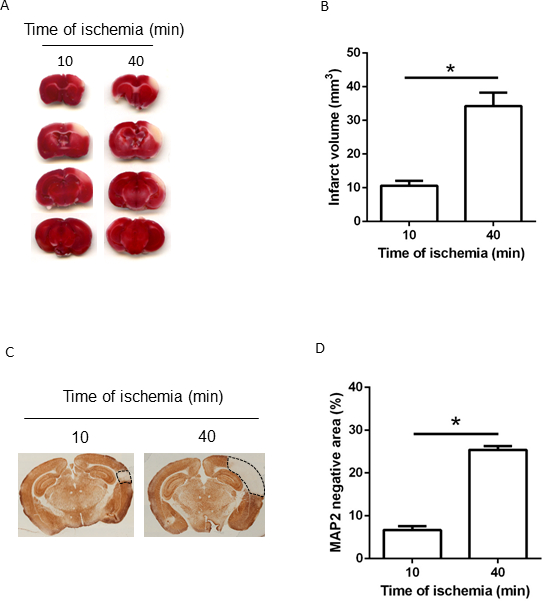 Figure 1: Infarct volume and neuronal loss are positively correlated with the length of the vessel occlusion. (A) Representative TTC stains of brain slices from mice, 24 h after the MCAO/reperfusion. The duration of the MCAO was 10 or 40 min. Data shown are representative of three independent experiments. (B) Quantification of infarct volume. The error bars represent SEMs; n = 8; *p < 0.05. (C) The MAP2 expression in B6 brains at 24 h after MCAO/reperfusion was determined using immunohistochemistry. MAP2-negative areas are enclosed by a dashed line in the representative image of MAP2 staining of the brain section. (D) Quantification of the MAP2 negative area. MAP2-negative area (%) = ipsilateral MAP2-negative area / contralateral hemisphere x 100; n = 3; *p < 0.05.

Figure 2: Locomotor activity decreased after cerebral ischemia-reperfusion. (A) Locomotor activity was analyzed 48 h after the MCAO/reperfusion. The duration of the MCAO was 40 min. The data were recorded for 60 min in an open-field assay. Mice's tracking distances were analyzed using CleverSys TopScan 1.0. The sham control group was comprised of mice that had undergone the surgery without the occlusion of the MCA or CCA. (B) Quantification of the distance moved by the sham and the MCAO/reperfusion mice. The data are presented as mean ± SEM; n = 7; *p < 0.05. Please click here to view a larger version of this figure. 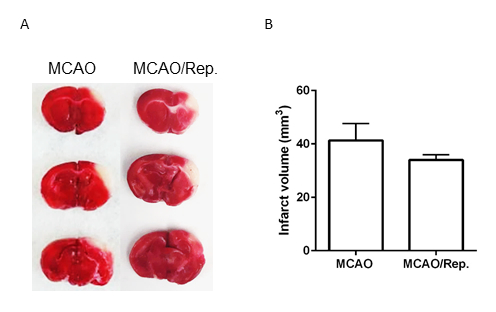 Figure 4: The infarct volume is not different between MCAO- and MCAO/reperfusion-induced injuries. (A) Representative TTC stains of brain slices from mice, 24 h after the MCAO. In the MCAO experimental group, the right MCA was permanently truncated using a vessel cauterizer, whereas the right CCA was transiently ligated for 40 min. In the MCAO/reperfusion (MCAO/Rep) experimental group, the procedure was as described in section 1 of the protocol. The duration of the MCAO was 40 min. (B) Quantification of infarct volume. The data are presented as mean ± SEM; n = 7.

The MCAO/reperfusion mouse model is an animal model commonly employed to mimic transient ischemia in humans. This animal model can be applied to transgenic and knockout mice strains to investigate the pathophysiology of stroke. Several steps in the protocol are especially critical. (1) The microdrill must be carefully used when creating a hole in the skull, with inappropriate action easily causing bleeding from the MCA. (2) The MCA should not be damaged, and bleeding must be avoided before and after the ligation procedure. Damage to the MCA affects the level of reperfusion in the ischemic brain7. The MCA reperfusion status must be checked after the MCAO. The occlusion and restoration of blood flow to the MCA can be analyzed by using a laser Doppler. (3) The CCA should not bleed during the CCA isolation. (4) The vagus nerve must not be damaged during the CCA isolation because this could increase the infarct size and probability of mortality. (5) The body temperature of the mouse should be maintained at 36.5 ± 0.5 °C. Hyperthermia increases the infarct size and probability of mortality11. Hypothermia reduces the infarct volume after cerebral ischemia12.

The significance of this MCAO/reperfusion model is that it can create highly reproducible cortical infarcts and behavioral deficits4. Compared with different MCAO models, such as the hypoxic ischemic (H/I) stroke model as described in a previous study8, this two-vessel occlusion model induces a relatively small variability in infarct volume (the coefficient of variation ranged from 0.11-0.17) (Table 1).Alternative stroke models, such as the intraluminal filament model, might result in an unpredictable infarct volume because of the uncertain status of the occlusion and reperfusion condition after surgery13. Compared with the three-vessel MCAO model (ligation of the right MCA and right and left CCAs)14, the proposed model involves the ligation of only two vessels (the right MCA and right CCA) to achieve cerebral ischemia. Consequently, a shorter surgery time is required than in the three-vessel MCAO model. The main limitation of this MCAO/reperfusion model is that it requires craniectomy to perform MCA ligation. One study indicated that craniotomy causes transcriptional changes in the brain15. Therefore, a sham control is required to determine the effects of MCAO/reperfusion on gene expression.

Neuronal loss in the cortical area is less when a longer reperfusion duration is employed. Studies have demonstrated that the MAP2-negative area is smaller after 7 days of reperfusion, compared with 2 days of reperfusion4,16. However, this recovery effect is unlikely in a brain with ischemia induced by an intraluminal monofilament model of MCAO17,18. In addition, the intraluminal monofilament model of MCAO can sustain the infarct size for at least 7 days.

B6 mice have extensive collateralization between the anterior cerebral artery and the MCA19. When we permanently truncated the MCA in the ischemic brain, we found that the infarct volume was not significantly different from the mice with a reperfused MCA at 24 h after the MCAO (Figure 4). Therefore, we suggest that the blood flow from the anterior cerebral artery collaterals might compensate for the ischemia effects of the MCA territory when the distal MCA is permanently occluded.

In this study, the two-vessel MCAO/reperfusion model created an ischemia-reperfusion injury and caused peripheral immune cells to infiltrate into the ischemic brain. This model can be employed to investigate the interplay between the brain and the immune system. In addition, it can be used to test potential neuroprotectants or drugs that modulate the immune response after cerebral ischemia-reperfusion. 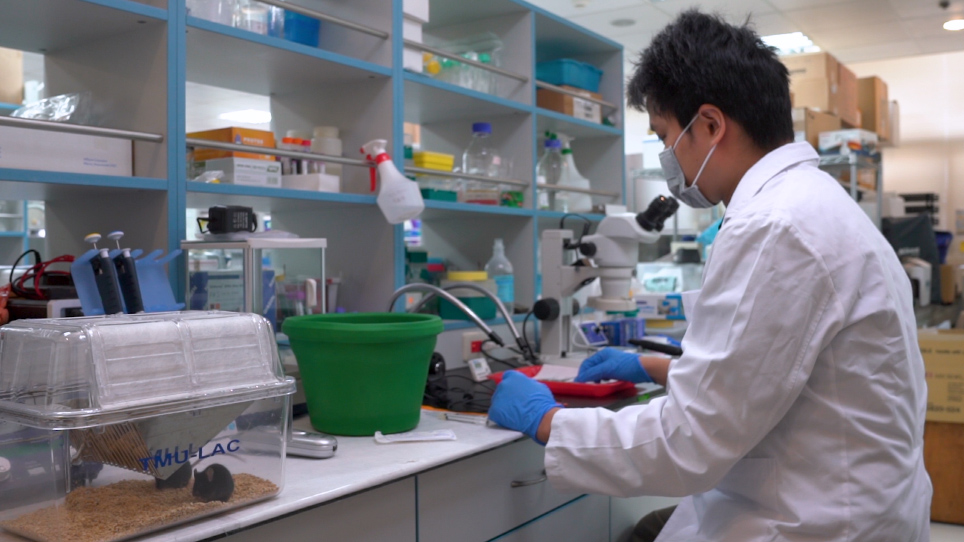