The analysis of environmental DNA (eDNA) has become a widely used approach to problem solving in species management. The detection of cryptic species including invasive and (or) species at risk is the goal, typically accomplished by testing water and sediment for the presence of characteristic DNA signatures. Reliable and efficient procedures for the capture of eDNA are required, especially those that can be performed easily in the field by personnel with limited training and citizen scientists. The capture of eDNA using membrane filtration is widely used currently. This approach has inherent issues that include the choice of filter material and porosity, filter fouling, and time required on site for the process to be performed. Flocculation offers an alternative that can be easily implemented and applied to sampling regimes that strive to cover broad territories in limited time.

Before the mid-2000s, the term “environmental DNA” was generally used to refer to DNA obtained from water and soil microbes although some use for the detection of human and animal DNA for purposes of fecal source tracking or non-native species detection had begun1,2,3. Presently, environmental DNA is generally used to describe DNA from cells sloughed from eukaryotic organisms, and the analysis of this DNA has become a widely used management tool. The detection of cryptic species including those that are invasive or species at risk is the goal, typically accomplished by testing water or sediment for the presence of the characteristic DNA signatures of the target species. Studies may focus on a single species of interest using a specific PCR assay (active sampling), or many species may be detected simultaneously using metabarcoding and massively parallel sequencing.

Many improvements in sample collection, sample processing, and data analysis associated with eDNA research have been made during the last two decades. Early studies employed alcohol precipitation to capture DNA from water samples3. While tried and true, the need to analyze large water volumes to increase assay sensitivity make this method unattractive due to the typical requirement for two volumes of ethanol for each volume of water sample.

Later studies have generally used membrane filtration, rationalizing that eDNA is present in a continuum of states from cellular-bound to freely dissolved, but that dissolved DNA is subject to rapid degradation and therefore that cellular-bound DNA represents the most significant fraction. Filter material and pore size optimization is widely discussed and debated as is the optimal method(s) for extraction of captured eDNA from the filter4,5,6.

A third approach to eDNA capture is flocculation, a process that has been used for centuries to clarify liquids including, water, beer, and wine. Several studies have used flocculation to capture virus from natural or potable water sources7,8,9,10,11. These studies have typically used pre-flocculated skim milk or iron chloride as capture agents. Iron chloride methods typically result in downstream analysis molecular problems due to PCR reaction inhibition12,13. Methods using pre-flocculated skim milk require the advance preparation of the flocculant, pH control, and thus far have only been applied to the capture of virus7,8,9.

Recently, flocculation capture of bacteria and virus based on the use of lanthanum (III) chloride has been studied12,13,14,15. The authors demonstrated that viable pathogens could be collected by this method as the binding of lanthanum chloride was effective at low concentration (0.2 mM). Furthermore, lanthanum flocculation is reversible via chelation under mild conditions in contrast to that of iron chloride.

Thus, flocculation using lanthanum chloride to capture biological particulates is attractive given that only a small amount of added concentrated flocculating agent is required, no strict pH control is needed, and sample volumes are scalable from milliliters to gallons. As applied to the capture of eDNA, cellular, sub-cellular (mitochondria and chloroplasts) as well as dissolved DNA are readily recovered. Bacteria and virus are collected simultaneously allowing for pathogen testing and (or) additional ecological studies from a single water sample. A flocculation protocol using lanthanum chloride is presented that enables collection of dissolved and particulate-bound nucleic acids from water samples. 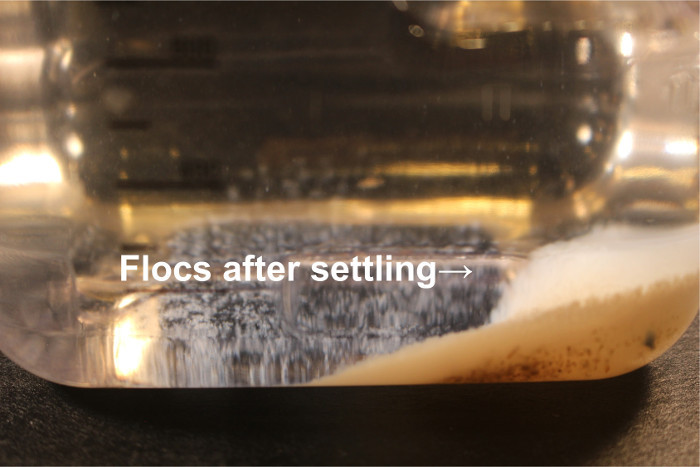 Figure 1: Collection of flocs settled at unit gravity. Flocs containing cellular material and eDNA are settled at the bottom of the sample bottle and are ready to be recovered after the supernatant is removed. Please click here to view a larger version of this figure.

Eight 500 mL water samples (450 mL each) taken from an aquarium housing two Eastern painted turtles (Chrysemys picta picta) were used to prepare eDNA using the described protocol. Another eight 500 mL water samples were filtered over 47 mm glass fiber filters of 1.5 µm porosity containing no binder and eDNA was extracted using the same extraction method as used for the flocculation protocol. DNA prepared using both methods was analyzed using quantitative PCR that targets the mitochondrial control region of the target species and uses forward and reverse primers specific for the target organism. The target organism for this demonstration was Chrysemys picta picta and the forward and reverse primers had the sequences (5’-CGTCCATGTAACAGATGGCGT-3’) and (5’-AAACCACCGTATGCCAGGTT-3’) respectively.

To further demonstrate the robustness of the flocculation protocol, we compared eight 500 mL water samples containing Eastern painted turtle eDNA that was captured using flocculation with eight additional 500 mL water samples from which the eDNA was captured using filtration over 1.5 µm retention glass fiber filters. This type of filter is widely used for the capture of eDNA. Material captured by flocculation and (or) filtration was extracted from the settled flocs and from the filters and analyzed by qPCR as described above except that quantification was performed by comparison to serially diluted standards (see Figure 2). These results support the high performance and reproducibility of the method (see Figure 3). 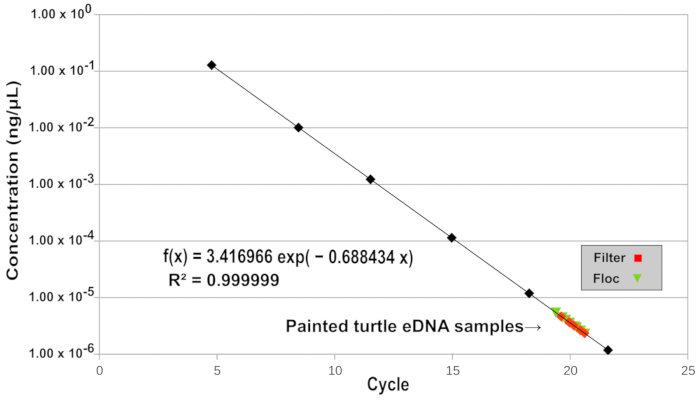 Figure 2: Quantification of Eastern painted turtle eDNA by qPCR. 8 flocculant-captured (green triangles) and 8 filter-captured (red squares) eDNA samples were quantified by qPCR. The black diamonds indicate the diluted standards used for quantification and are connected by a line of best fit. The equation describing the line of best fit and coefficient of determination (R2) are shown. The linearity, efficiency, and reproducibility of the assay are demonstrated. Please click here to view a larger version of this figure. 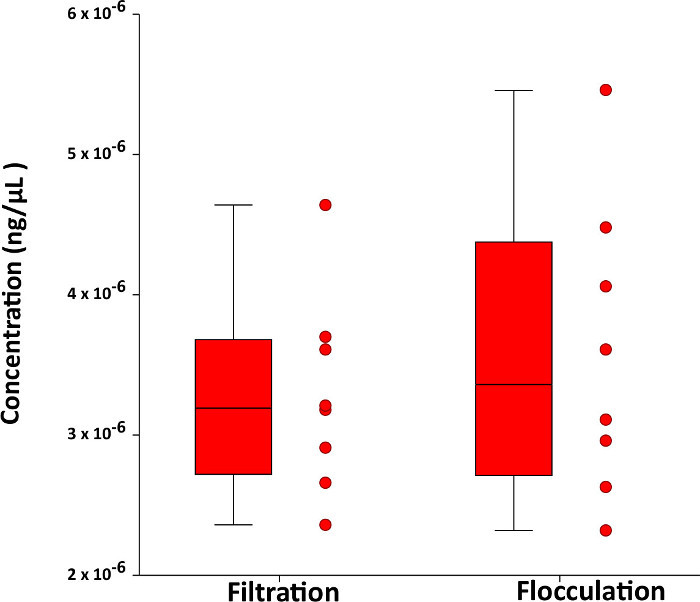 Figure 3: Comparison of flocculant and filter protocols for capture of eDNA. The efficiency of eDNA capture by flocculation is shown to be equivalent to eDNA capture by filtration on glass fiber filters. The boxes are bounded by the 25th an 75th percentiles of the data and error bars indicate the data range. A line inside the boxes shows the median. Red dots adjacent to the boxes show the individual determinations of the replicates. Please click here to view a larger version of this figure.

Although this technique is straightforward, some steps are critical to success. The collection and transfer of the flocs must be done completely so as not to lose DNA. Residual material must be gathered using strategic rinses. The described protocol uses a commercial DNA extraction kit for the final processing of flocculated material. Other extraction methods may perform similarly or may be superior in performance, but modifications of this part of the protocol have not been exhaustively tested.

The described protocol is useful for sampling strategies that require taking samples from widely dispersed sites with minimal time differential between samples or when high levels of suspended sediments would clog filters readily. A disadvantage of this protocol is the requirement for the transport water samples from the field to a field station for processing on site or shipping to another laboratory for processing. Filtration methods produce a light weight and compact filter that carries the bound target material that can be transported and shipped easily. Unfortunately, on site filtration requires a variable amount of time to be spent at each sampling site dependent on water conditions. Additionally, filtration requires carrying equipment into the field, decontamination of equipment between samples, and specialized training of personnel and is not generally a process usable for citizen scientists.

The described protocol is simple, and the sample collection portion of the procedure can easily be performed by field personnel with minimal training, or even by citizen scientists. Future applications can be envisioned that include bio-surveillance of pathogens, invasive species, and changes in biodiversity resulting from contaminants or other abiotic factors. Like many protocols, future modifications and improvements are expected that will broaden its usefulness.

This work was completed with funding from the U.S. Geological Survey.

Any use of trade, firm, or products names is for descriptive purposes only and does not imply endorsement by the U.S. Government.