Microarray analysis was conducted to determine genetic expression profiles in C. elegans, and real-time PCR was used to validate and quantify microarray data.

Synapses are composed of a presynaptic active zone in the signaling cell and a postsynaptic terminal in the target cell. In the case of chemical synapses, messages are carried by neurotransmitters released from presynaptic terminals and received by receptors on postsynaptic cells. Our previous research in Caenorhabditis elegans has shown that VSM-1 negatively regulates exocytosis. Additionally, analysis of synapses in vsm-1 mutants showed that animals lacking a fully functional VSM-1 have increased synaptic connectivity. Based on these preliminary findings, we hypothesized that C. elegans VSM-1 may play a crucial role in synaptogenesis. To test this hypothesis, double-labeled microarray analysis was performed, and gene expression profiles were determined. First, total RNA was isolated, reversely transcribed to cDNA, and hybridized to the DNA microarrays. Then, in-silico analysis of fluorescent probe hybridization revealed significant induction of many genes coding for members of the major sperm protein family (MSP) in mutants with enhanced synaptogenesis. MSPs are the major component of sperm in C. elegans and appear to signal nematode oocyte maturation and ovulation . In fruit flies, Chai and colleagues 1 demonstrated that MSP-like molecules regulate presynaptic bouton number and size at the neuromuscular junction. Moreover, analysis performed by Tsuda and coworkers 2 suggested that MSPs may act as ligands for Eph receptors and trigger receptor tyrosine kinase signaling cascades. Lastly, real time PCR analysis corroborated that the gene coding for MSP-32 is induced in vsm-1(ok1468) mutants. Taken together, research performed by our laboratory has shown that vsm-1 mutants have a significant increase in synaptic density, which could be mediated by MSP-32 signaling.

3. Qualitative and Quantitative Analysis of RNA

Fusion of active zone precursor vesicles at presynaptic sites is an obligatory step during synaptogenesis (3). VSM-1, a recently identified v-SNARE master protein, was proposed to inhibit vesicle fusion in yeast and synaptogenesis in nematodes (see Figure 1) by an undetermined mechanism (4, and our unpublished work). To better understand the molecular pathway underlying VSM-1 regulation in nematodes and bring some light into the synaptogenesis field, we began a genome-wide screen and determined that major sperm protein genes (msp) are induced in the absence of fully functional VSM-1.

Once the quality of RNA was determined, we proceeded with the cDNA synthesis. To do so, we reverse transcribed the mRNA and added a capture sequence to the tail. The produced cDNAs containing capture sequences for Cy3 and Cy5 were hybridized to microarray slides and sent off for scanning. Microarray images were then entered into an open source computer software program called MAGICTool developed at Davidson College by Laurie Heyer and her undergraduate students. Using this software we overlaid Cy3 and Cy5 images, gridded microarrays, and analyzed fluorescent profiles (see Figure 3). Once gridding was complete we then segmented each individual square making sure the whole printed oligonucleotide was being examined. Then we analyzed the induced ratios and created genetic profile expressions showing that genes coding for the MSP family are induced in nematodes with enhanced synaptogenesis. (Table 3).

To further understand the genetic profile in the vsm-1 mutant we analyzed a number of genes that code for members of the MSP family using real time PCR. First, total RNA was isolated from wild type and vsm-1(ok1468) mutant strains. RNA samples were then reversely transcribed into cDNAs and used for real time PCR analysis. Evaluations of real time PCR expression profiles demonstrated that one member of the MSP family seems to be induced in vsm-1(ok1468) mutants. Moreover, real time PCR data validates findings from microarrays and narrowed down the search to one msp gene candidate (Figure 4). 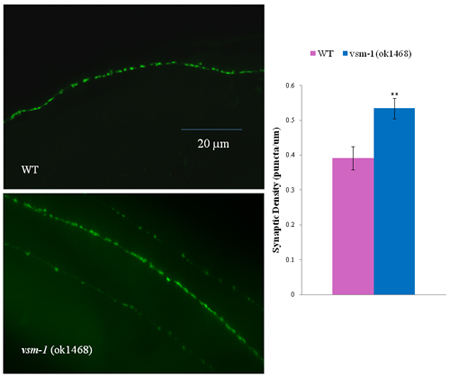 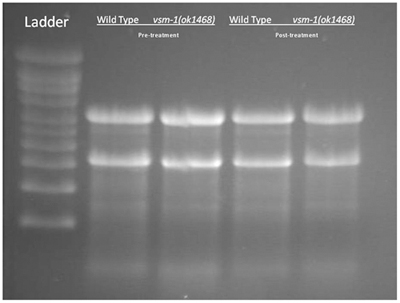 Figure 2. The quality of extracted RNA was determined using agarose gel electrophoresis. The presence of two intact ribosomal subunits before and after DNase I treatment was apparent in RNA extracted from Wild Type and vsm-1(ok1468) samples. 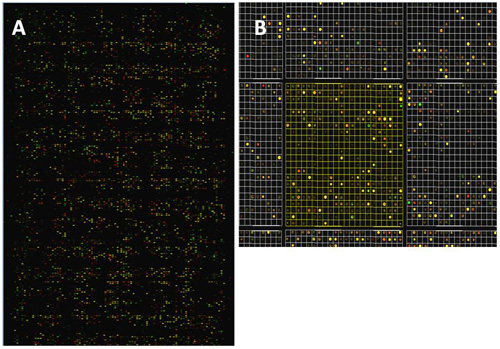 Figure 3. A. Microarray image for an experiment where the control was labeled red (Cy5) and the vsm-1 mutant was labeled green (Cy3). B. Representative image showing 1 out of 48 grids analyzed per microarray. Each small square on a grid is representative of a single printed oligonucleotide, and each grid is composed by 22 rows and 22 columns. 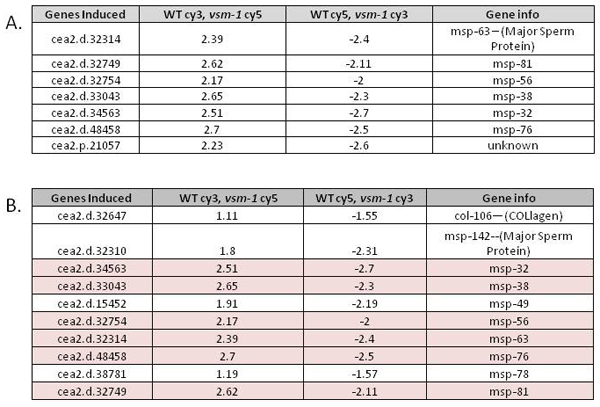 Table 2. Microarray analysis of transcripts isolated from Larvae 4 (A) and Larvae 3 (B) C. elegans nematodes showed that genes coding for the major sperm proteins are induced in mutants with enhanced synaptogenesis. Highlighted genes indicates induced genes in both Larvae 3 and Larvae 4. 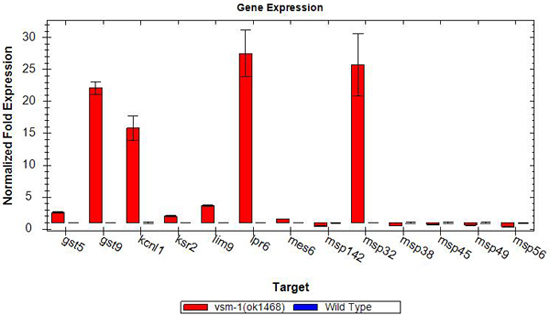 In this study we developed an easy, user friendly protocol that can be used to determined gene expression profiles underlying various biological phenomena. In this protocol, total RNA was first isolated and treated using DNase I. Our method of RNA isolation has been dramatically simplified by omitting phenol extractions and using affinity resins for clean up 5,6. Briefly, C. elegans cuticule and cell membranes were cracked-open by freezing nematodes with liquid nitrogen and grinding with molecular resin. Next, extracted RNA was treated with DNase I before cDNA synthesis. The later step was added to minimize unspecific hybridizations; RNA samples contaminated with genomic DNA could introduce interference and produce many false-positives. Then, wild type and vsm-1(ok1468) mutant cDNAs were tagged with Cy3 and Cy5 capture sequences and hybridized onto C. elegans microarrays obtained through the GCAT program. This system is more sensitive than similar products, and its two-color design decreases the number of arrays needed, resulting in greater time and cost efficiency 7,8. Additionally, this system does not require the specialized equipment of other similar systems; therefore, this procedure could be accomplished in any standard laboratory setting 7. Third, fluorescent hybridized array images were analyzed using the open source software MAGICTool, and gene expression profiles were created. MAGICTool is a user-friendly program that is easily utilized by individuals of all experience levels, from the undergraduate to the post-doctorate. However, optimal performance requires large memory availability. Lastly, candidate genes obtained using microarray analysis were validated with real time PCR.

Though the genomic approach is an efficient method for studying biological phenomena, there are some limitations one should take into consideration. First, despite the specificity of this microarray protocol, transcripts within a family are indistinguishable from one another if the printed oligonucleotide is taken from conserved sequences. Real time PCR compensates for similarities within a gene family and may even distinguish between specific isoforms of the same gene. However, with real time PCR it is a challenge to find true controls that are expressed equally throughout an organism's lifespan. Because of this, results will be relative. A proteomic approach is one alternative to our technique. Individual proteins may be isolated using 2D gel electrophoresis and identified with mass spectrometry.

Our studies specifically show that many members of the Major Sperm Protein (MSP) family are induced in vsm-1 mutant nematodes with enhanced synaptic density. MSPs are unique to C. elegans and are responsible for oocyte maturation and ovulation. Chai 1 has demonstrated that regulation of presynaptic bouton number and size at the neuromuscular junction in fruit flies is likely controlled by molecules containing Major Sperm Protein domains. Studies by Tsuda and colleagues 2 have demonstrated Major Sperm Protein domains may serve as ligands for Ephrine receptors, triggering receptor tyrosine kinase signaling cascades. Moreover, real time PCR analysis validated and narrowed down microarray results to one member of the msp family, msp-32. Taken together, the work presented here represents a genome-wide analysis of a central neuroscience dilemma as well as the power of undergraduate research in the scientific endeavor.

The vsm1(ok1468) mutant was isolated by the Oklahoma Gene Knockout Consortium.
The authors thank Dan Stefanovic and Tanner Wheeler for their valuable help during the project execution.