Animal models are frequently utilized to study cancer metastasis to bone. In this protocol we will describe two common methods of tumor inoculation for bone metastasis studies and briefly describe some of the analyses utilized to monitor and quantify these models.

Bone metastases are a common occurrence in several malignancies, including breast, prostate, and lung. Once established in bone, tumors are responsible for significant morbidity and mortality1. Thus, there is a significant need to understand the molecular mechanisms controlling the establishment, growth and activity of tumors in bone. Several in vivo models have been established to study these events and each has specific benefits and limitations. The most commonly used model utilizes intracardiac inoculation of tumor cells directly into the arterial blood supply of athymic (nude) BalbC mice. This procedure can be applied to many different tumor types (including PC-3 prostate cancer, lung carcinoma, and mouse mammary fat pad tumors); however, in this manuscript we will focus on the breast cancer model, MDA-MB-231. In this model we utilize a highly bone-selective clone, originally derived in Dr. Mundy's group in San Antonio2, that has since been transfected for GFP expression and re-cloned by our group3. This clone is a bone metastatic variant with a high rate of osteotropism and very little metastasis to lung, liver, or adrenal glands. While intracardiac injections are most commonly used for studies of bone metastasis2, in certain instances intratibial4 or mammary fat pad injections are more appropriate. Intracardiac injections are typically performed when using human tumor cells with the goal of monitoring later stages of metastasis, specifically the ability of cancer cells to arrest in bone, survive, proliferate, and establish tumors that develop into cancer-induced bone disease. Intratibial injections are performed if focusing on the relationship of cancer cells and bone after a tumor has metastasized to bone, which correlates roughly to established metastatic bone disease. Neither of these models recapitulates early steps in the metastatic process prior to embolism and entry of tumor cells into the circulation. If monitoring primary tumor growth or metastasis from the primary site to bone, then mammary fat pad inoculations are usually preferred; however, very few tumor cell lines will consistently metastasize to bone from the primary site, with 4T1 bone-preferential clones, a mouse mammary carcinoma, being the exception 5,6.

Following intracardiac or intratibial inoculation of tumor cells (Figure 1) mice are monitored weekly by radiography and fluorescence (or luminescence). Lesions normally become apparent by x-ray between week 2 and 3, while they may be visible by fluorescence and luminescence as early as week 2, depending on the model (Figure 2). Lesions are visible as dark holes in the bone, and become more pronounced with time (Figure 3). Lesions were quantified using Metamorph analysis of radiographs and fluorescence was quantified using Maestro (CRi) imaging acquisition and analysis software. As lesions begin to grow, mice frequently become cachectic. Sacrifice is required when mice have lost between 10-20% of their initial body weight. The condition of the mice can change rapidly and must be monitored multiple times during the day. Between 3-4 weeks mice began to drag one or both hind limbs and the entire study was sacrificed. Images were taken prior to sacrifice. After anesthesia overdose, blood was collected to measure markers of bone turnover or other factors. After cervical dislocation, the skin was stripped from the mouse and bones excised and cleaned for ex vivo imaging (Figure 3) which will allow visualization of tumor foci at least 7 days earlier than in vivo imaging techniques. Once imaging was completed bones were placed in labeled cassettes and stored in formalin for fixation and further histological processing or μCT analysis. Histomorphometry was performed on the samples to indicate the tumor burden and BV/TV after μCT was performed on a tibia to quantify the amount of bone destruction (Figure 4).

Figure 1. Proper placement of injection. Ventral radiographical view (A) of adult mouse thorax showing proper placement of needle in the 4th intercostal space and into the left ventricle for intracardiac inoculation. Anatomical landmarks are shown with horizontal dashed lines on the sternum (outlined in white). On the mouse's skin the sternal notch and xyphoid process serve as landmarks, and the needle is inserted slightly left of the sternum. Ventral radiographical view (B)of adult mouse leg showing proper placement of needle in the proximal tibia, aligned between the condyles. From a lateral perspective the tip of needle is placed behind the tibial tuberosity and deep to the epiphyseal plate. Ideal location for injection is shown by white circle. 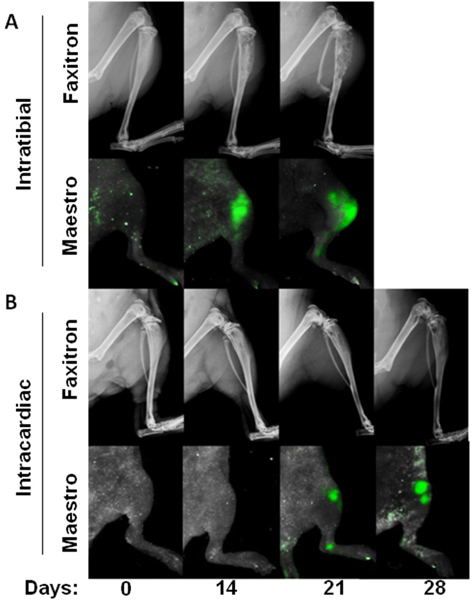 Figure 2. Time course of bone metastasis models. Progression of cancer-induced bone disease shown with x-rays and GFP+ fluorescent images of the tumors in vivo from intratibial injections (A) and intracardiac injections (B). 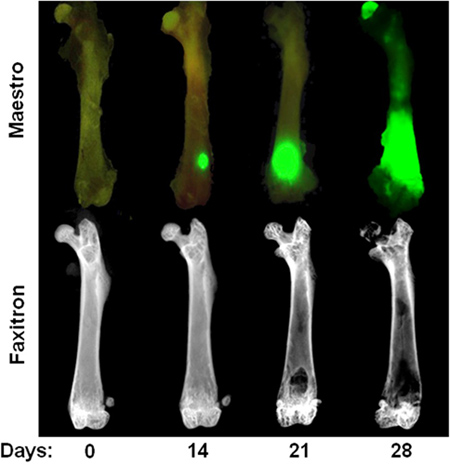 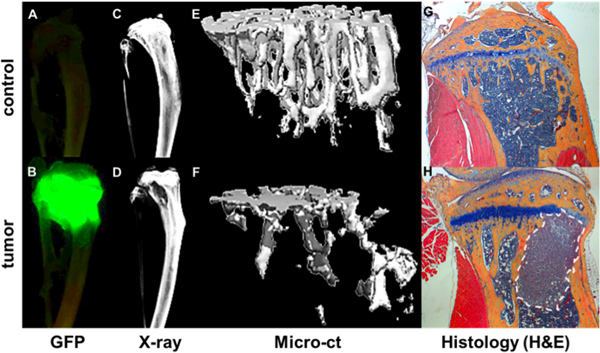 Figure 4. Quantification of bone metastatic progression. GFP+ tumor as visualized by Maestro imaging ex vivo of tibiae of a non-tumor bearing mouse (A) and a mouse 4 weeks after intracardiac injection of a GFP expressing MDA-MB-231 subclone (B). Tumor foci correlate with areas of bone destruction as shown by Faxitron (D) compared a bone without tumor (C). Bone structural and mineral data from microCT measurements is rendered as 3d images of a healthy bone (E) and a tumor bearing bone (F) where areas of bone destruction are shown as void area. Further bone and tumor detail is seen in corresponding H&E stained histological sections (G & H).

Studies of tumor-induced bone disease rely on several animal models of which the two most commonly used are intracardiac and intratibial inoculations. In many cases intracardiac is the best option for studying metastasis to bone; however, it does not represent the full metastatic process, and therefore mammary fat pad or other orthotopic injections should ideally be used toward that end. Tumor cells do not metastasize readily from the primary site in most studies using human cells, and if so, they primarily metastasize to the lungs. Some strains of the 4T1 cells will metastasize to bone 5,6, but the lesions are smaller, more difficult to quantify, and the cells are murine rather than human. Additionally, GFP expression can elicit an immune response in immune competent models where 4T1 clones are frequently used that can complicate long-term metastasis studies12. Other models of tumor-induced bone disease, like myeloma, utilize tail vein injections 13. However, this approach will not work for solid tumor metastasis studies as it will overwhelmingly seed the tumors to the lungs, causing the mice to die of lung disease before developing bone metastases. Intratibial injections are generally viewed less favorably than the other methods, as it does not represent a model of metastasis, but rather the progression of established metastatic bone disease, and can cause inflammation at the injection site. Nonetheless, this procedure is useful to separate initial metastatic steps and establishment from the direct effects on end stage cancer-induced bone disease. Furthermore, in the case of many prostate tumor models, it is the only approach that allows for consistent tumor growth in bone4.

The choice of techniques for monitoring bone disease is as critical and specific to the study as the route of inoculation. In our group we utilize many different techniques depending on the study, the most common of which are x-ray, fluorescence and histology. While many groups have transitioned to luciferase imaging, we have found that we get fewer bone metastases with the luciferase-transfected cells and that we get better anatomical detail with fluorescent imaging and easier co-localization with x-rays. Furthermore, direct comparison between modalities did not yield a significant advantage to luciferase imaging for early detection in bone. However, each group performing these experiments will need to evaluate the utility of each approach for their studies.

Additionally, though utilized in many other models, the detailed ex vivo analysis techniques are specific to bone. We commonly analyze bone loss by μCT. While performed similarly to studies analyzing normal bone, the analysis of tumor-bearing bones is complicated by the frequent loss or disruption of the growth plate as a marker. Histological analyses are also somewhat nuanced in tumor-bearing bones as compared to protocols developed for non-tumor bearing bones and soft tissues. In this protocol we have limited the description of the ex vivo analyses in order to maintain focus to those most commonly utilized by our group. As with in vivo analyses, each group will need to determine what approaches work best for their study.