A simple method to derive and maintain spermatogonial stem and progenitor cell lines from adult mice is presented here. The method utilizes feeder cells originating from the somatic cell compartment of the adult mouse testis. This technique is applicable to common mouse strains, including transgenic, knock-out, and knock-in mice.

Spermatogonial stem and progenitor cells (SSCs) of the testis represent a classic example of adult mammalian stem cells and preserve fertility for nearly the lifetime of the animal. While the precise mechanisms that govern self-renewal and differentiation in vivo are challenging to study, various systems have been developed previously to propagate murine SSCs in vitro using a combination of specialized culture media and feeder cells1-3.

Most in vitro forays into the biology of SSCs have derived cell lines from neonates, possibly due to the difficulty in obtaining adult cell lines4. However, the testis continues to mature up until ~5 weeks of age in most mouse strains. In the early post-natal period, dramatic changes occur in the architecture of the testis and in the biology of both somatic and spermatogenic cells, including alterations in expression levels of numerous stem cell-related genes. Therefore, neonatally-derived SSC lines may not fully recapitulate the biology of adult SSCs that persist after the adult testis has reached a steady state.

Several factors have hindered the production of adult SSC lines historically. First, the proportion of functional stem cells may decrease during adulthood, either due to intrinsic or extrinsic factors5,6. Furthermore, as with other adult stem cells, it has been difficult to enrich SSCs sufficiently from total adult testicular cells without using a combination of immunoselection or other sorting strategies7. Commonly employed strategies include the use of cryptorchid mice as a source of donor cells due to a higher ratio of stem cells to other cell types8. Based on the hypothesis that removal of somatic cells from the initial culture disrupts interactions with the stem cell niche that are essential for SSC survival, we previously developed methods to derive adult lines that do not require immunoselection or cryptorchid donors but rather employ serial enrichment of SSCs in culture, referred to hereafter as SESC2,3.

The method described below entails a simple procedure for deriving adult SSC lines by dissociating adult donor seminiferous tubules, followed by plating of cells on feeders comprised of a testicular stromal cell line (JK1)3. Through serial passaging, strongly adherent, contaminating non-germ cells are depleted from the culture with concomitant enrichment of SSCs. Cultures produced in this manner contain a mixture of spermatogonia at different stages of differentiation, which contain SSCs, based on long-term self renewal capability. The crux of the SESC method is that it enables SSCs to make the difficult transition from self-renewal in vivo to long-term self-renewal in vitro in a radically different microenvironment, produces long-term SSC lines, free of contaminating somatic cells, and thereby enables subsequent experimental manipulation of SSCs.

Note that all reagents described below should be prepared in sterile fashion (see Tables 1 & 2). This protocol employs the JK1 cell line (Cell Biolabs, Inc., catalog #CBA-315) as feeders which is a transformed derivative of adult mouse testicular somatic cells and has been described elsewhere3. Note also that all animal procedures should be performed in accordance with institutional guidelines and regulations.

5. Subsequent Expansion and Passaging of SSCs by Trituration

The appearance of passage zero wild type, adult SSC colonies after 7 days is shown in Figure 1. Three-dimensional colonies are comprised of a layer of flat cells attached to the feeders or underling extracellular matrix deposited by the feeders with multiple layers of SSCs growing on top. While healthy SSCs are brightly refractile and uniformly 11-12 μm diameter, the cell borders are difficult to distinguish and the size of the colonies may be highly variable, both within the well and between wells prepared from different mice. Visualization of the colonies is aided by a phase microscope with a digital display and a slightly de-focused focal plane, which enhances the contrast between highly homogeneous SSC colonies and contaminating somatic cells which are present in early passage (0-2) cultures and do not form tightly packed colonies (see Figure 1A inset). Note that the morphology of the feeder cells will change gradually after switching from DMEM/10% to stem cell culture medium after inactivation with mitomycin-C.It is also important to note that the initial cell suspension is not filtered or strained, because residual clumps of somatic cells are thought to enhance survival of SSCs at the time of initial plating and should not be removed until SSC colonies are established. Serial passaging (>5-7 times) is required to purify the germ cells to near homogeneity (>98%) and deplete residual somatic cells. If subsequent experiments will specifically require enrichment of stem cells from the total population of germ cells in the culture, then cell selection using immunomagnetic beads or flow cytometry can be employed for further purification; for example, stem cell enrichment can be obtained using antibodies against Thy1, CD9, α6 integrin and others11. The identity of SSCs should be subsequently confirmed using immunophenotyping, gene expression, and by transplantation, since transplantation analysis is the only means to definitively assess the quantity of authentic, functional stem cells12,13. 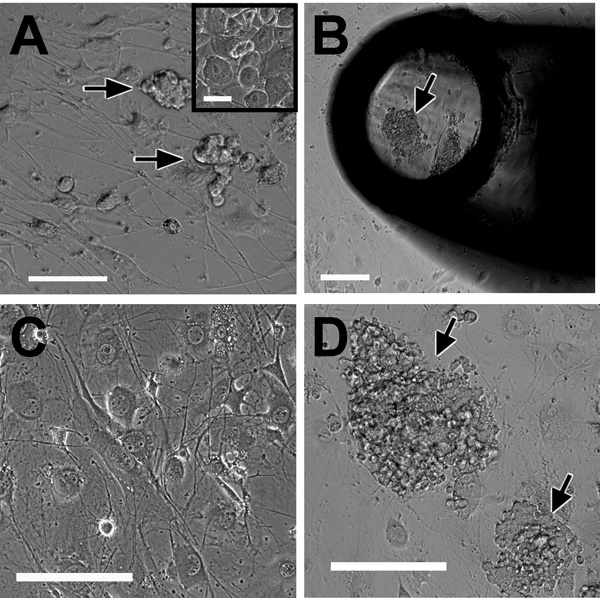 This method for deriving adult SSCs using adult testis-derived feeder cells is robust and has succeeded when common genetic backgrounds (e.g. FVB, C57Bl6 and mixed 129SV/C57Bl/6) and different mutant strains were employed2,3,7,14. In fact, the microenvironment created by the culture system is sufficient to overcome some of the genetic barriers to maintaining adult SSCs in vivo (e.g. in the case of plzf-/- animals)7. While we employ JK1 cells as feeders, non-transformed adult testicular somatic cells can also be used with equal efficacy as JK1 cells2,3.

SESC was designed to efficiently obtain long-term adult SSC lines. Unfortunately, the high efficiency is achieved with a trade-off for the following reason. A notable limitation of the procedure is that the omission of a filtering or straining step at the time of initial plating and the manipulation that the procedure involves, which can affect cell survival, may cause substantial variability in cell numbers plated from well to well, which precludes effective quantitation at the stage of initial colony formation. However, quantitative assays can be performed with slightly later passage cultures at which time a single cell suspension can be easily prepared by standard trypsinization (>passage 5-7).

Because adult SSCs in culture can be expanded and maintained almost indefinitely, this protocol enables the efficient production of cell lines that can be used subsequently in a similar fashion to other established primary cultures or cell lines (i.e. gene and protein expression analyses or ectopic expression of a gene of interest). Nonetheless, it is essential to ultimately confirm results using transplantation analysis as the gold standard or another validated surrogate assay, such as the SSC cluster formation assay12,15.

This work was supported by the New York State Department of Health (C026878). M.S. was a New York Stem Cell Foundation-Druckenmiller Fellow. Supported in Part by Research Grant No. 5-FY11-571 from the March of Dimes Foundation.