We describe a live-cell imaging method that provides insight into protein dynamics during the T-cell activation process. We demonstrate the combined usage of the T-cell spreading assay, confocal microscopy and imaging analysis to yield quantitative results to follow signaling complex formation throughout T-cell activation.

Protection against infectious diseases is mediated by the immune system 1,2. T lymphocytes are the master coordinators of the immune system, regulating the activation and responses of multiple immune cells 3,4. T-cell activation is dependent on the recognition of specific antigens displayed by antigen presenting cells (APCs). The T-cell antigen receptor (TCR) is specific to each T-cell clone and determines antigen specificity 5. The binding of the TCR to the antigen induces the phosphorylation of components of the TCR complex. In order to promote T-cell activation, this signal must be transduced from the membrane to the cytoplasm and the nucleus, initiating various crucial responses such as recruitment of signaling proteins to the TCR;APC site (the immune synapse), their molecular activation, cytoskeletal rearrangement, elevation of intracellular calcium concentration, and changes in gene expression 6,7. The correct initiation and termination of activating signals is crucial for appropriate T-cell responses. The activity of signaling proteins is dependent on the formation and termination of protein-protein interactions, post translational modifications such as protein phosphorylation, formation of protein complexes, protein ubiquitylation and the recruitment of proteins to various cellular sites 8. Understanding the inner workings of the T-cell activation process is crucial for both immunological research and clinical applications.

Various assays have been developed in order to investigate protein-protein interactions; however, biochemical assays, such as the widely used co-immunoprecipitation method, do not allow protein location to be discerned, thus precluding the observation of valuable insights into the dynamics of cellular mechanisms. Additionally, these bulk assays usually combine proteins from many different cells that might be at different stages of the investigated cellular process. This can have a detrimental effect on temporal resolution. The use of real-time imaging of live cells allows both the spatial tracking of proteins and the ability to temporally distinguish between signaling events, thus shedding light on the dynamics of the process 9,10. We present a method of real-time imaging of signaling-complex formation during T-cell activation. Primary T-cells or T-cell lines, such as Jurkat, are transfected with plasmids encoding for proteins of interest fused to monomeric fluorescent proteins, preventing non-physiological oligomerization 11. Live T cells are dropped over a coverslip pre-coated with T-cell activating antibody 8,9, which binds to the CD3/TCR complex, inducing T-cell activation while overcoming the need for specific activating antigens. Activated cells are constantly imaged with the use of confocal microscopy. Imaging data are analyzed to yield quantitative results, such as the colocalization coefficient of the signaling proteins.

Any additional tagged proteins must be fused to different fluorophores and be encoded on plasmids encoding for different selection antibiotics. Selection medium for cells transfected with more than one plasmid should be supplemented with all the appropriate antibiotics.

We present an example of live T-cell imaging and analysis. Prior to the imaging experiment, SLP76 deficient T cells (J14) were analyzed with the use of FACS to determine the expression of the fluorescent proteins (Figure 1). T cells transfected with the tagged signaling proteins mCFP-Nck and SLP76-mYFP were deposited over activating slides and imaged during T-cell spreading (Figure 2). Collected images show the dynamics of protein localization throughout activation and spreading (Figure 3). Computerized image processing provides new insights and quantitative information from the visualized cells, while minimizing human bias. To examine the colocalization of the two proteins throughout the cellular activation process, we utilized the colocalization tool of the Imaris software (Bitplane AG, Zurich Switzerland). By comparing the colocalization coefficients between different time points across imaged cells, we were able to ascertain that the colocalization of Nck and SLP76 does not change significantly throughout T-cell activation (p > 0.3) (Figure 4). 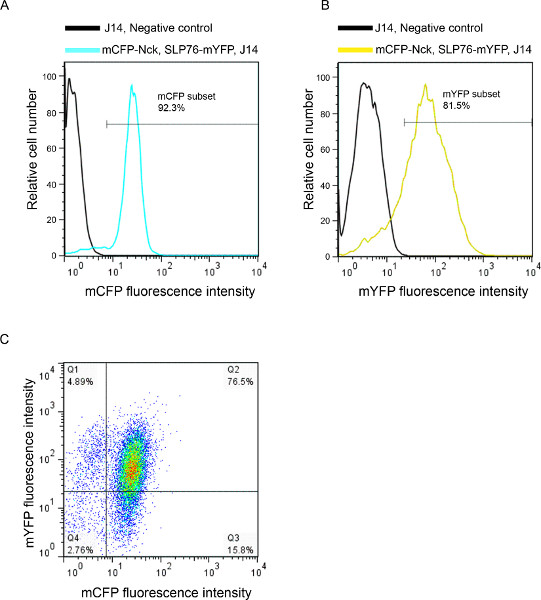 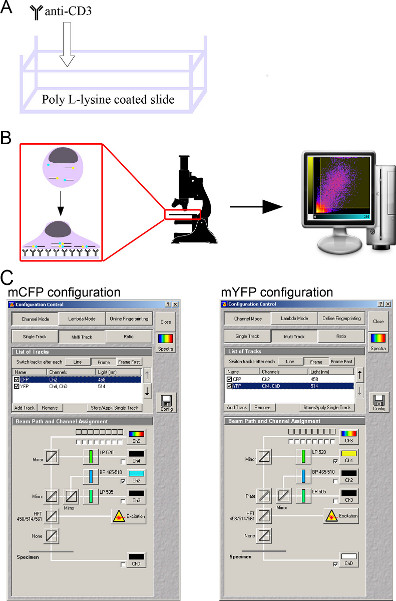 Figure 3. Distribution of Nck and SLP76 during the T-cell activation process. Cells expressing mCFP-Nck and SLP76-mYFP were dropped over anti-CD3 stimulatory antibody pre-coated coverslips and constantly imaged for a period of 7 min. mCFP-Nck is represented by cyan, while SLP76-mYFP is shown in yellow. 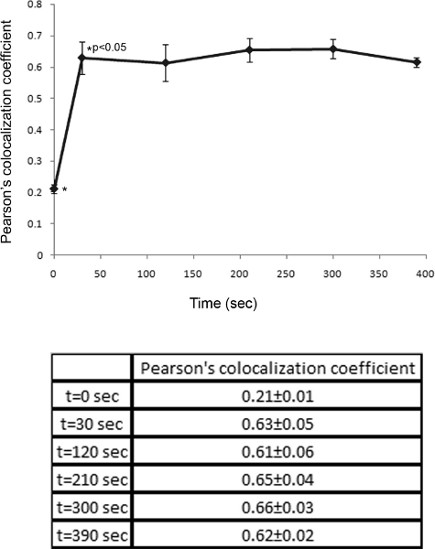 The regulation and function of multiple cellular processes depend on the formation and termination of protein-protein interactions. Microscopic imaging allows the real-time tracking of fluorescently tagged proteins in living cells. Colocalization of tagged proteins can suggest a direct or indirect interaction between the proteins, and can be used to reinforce findings obtained by biochemical methods, such as immunoprecipitation. Unlike biochemical methods, live-cell imaging allows these inter-protein interactions to be observed spatially and over time, facilitating the monitoring of physiological processes as they occur and the detection of the cellular distribution of proteins. Various tools for the quantitative analysis of colocalization have been developed; Pearson's correlation coefficient remains a very attractive and widely available method for quantification of the degree of colocalization between two proteins 12. While fluorescence resonance energy transfer (FRET) experiments enable the detection of inter-protein interactions characterized by close proximity (10 nm), this method requires specialized settings (equipment and compatibility of fluorescent taggings used) and complex data processing. For most uses, colocalization analysis, in conjugation with biochemical methods, constitutes an easy-to-use and straightforward method for observing protein-protein interactions over time.

Establishing a fluorescence-intensity threshold for analyzed pixels, while ignoring pixels below the intensity threshold for either channel, is of critical importance for accurate and sensitive colocalization analysis. The commonly used algorithm for the objective and automated determination of these thresholds was developed by Costes et al. 13 and is implemented by image processing programs such as Imaris and Volocity.

The protocol we presented can also be adapted to other hematopoietic cell lines by adjusting cell-growth conditions as required, selecting a transfection setting suitable for the cell line in question and modifying the cellular activation process, if applicable. Please note that while we used the LSM 510 Meta confocal microscope, with the appropriate adjustments and use of settings, other confocal microscopy systems can be successfully used as well.

The use of live T-cell imaging allows the regulatory and activation processes to be directly monitored, enabling signaling events to be explored with temporal and spatial resolution unavailable using biochemical and molecular methods. We present a straightforward method for carrying out a live T-cell spreading assay, monitoring relevant proteins in real-time and analyzing the data to yield quantitative results. Resulting microscopy data can also be used for other downstream applications, such as cell-shape index analysis 16 and FRET analysis 17,18, depending on the specific experimental setup and research objectives.

We have no conflicts of interest to disclose.

The authors thank Sophia Fried for technical assistance. MBS thanks the following agencies for their research support: The Israel Science Foundation for grants no.1659/08, 971/08, 1503/08 and 491/10, the Ministries of Health & Science for grants no. 3-4114 and 3-6540, the Israel Cancer Association through the Estate of the late Alexander Smidoda, and the Taubenblatt Family Foundation for the Bio-medicine excellence grant.