We show here the in vivo insertion of an osmotic pump for constant local drug delivery and the creation of hindlimb ischemia in a mouse model. Moreover, the hindlimb vasculature is perfused with Microfil, a silicone radiopaque agent, to prepare for micro-computed tomography (micro-CT) imaging.

Preclinical research in animal models of peripheral arterial disease plays a vital role in testing the efficacy of therapeutic agents designed to stimulate microcirculation. The choice of delivery method for these agents is important because the route of administration profoundly affects the bioactivity and efficacy of these agents1,2. In this article, we demonstrate how to locally administer a substance in ischemic hindlimbs by using a catheterized osmotic pump. This pump can deliver a fixed volume of aqueous solution continuously for an allotted period of time. We also present our mouse model of unilateral hindlimb ischemia induced by ligation of the common femoral artery proximal to the origin of profunda femoris and epigastrica arteries in the left hindlimb. Lastly, we describe the in vivo cannulation and ligation of the infrarenal abdominal aorta and perfusion of the hindlimb vasculature with Microfil, a silicone radiopaque casting agent. Microfil can perfuse and fill the entire vascular bed (arterial and venous), and because we have ligated the major vascular conduit for exit, the agent can be retained in the vasculature for future ex vivo imaging with the use of small specimen micro-CT3.

Peripheral arterial disease (PAD) is an atherosclerotic disease that causes insufficient blood supply in the legs4. It affects 8 to 12 million Americans, and current medical treatments offer only limited relief5,6. Novel therapeutic agents that improve blood circulation in legs would not only restrain disease progression but also enhance quality of life. The incidence of PAD is higher in people over the age of 50 years, so local pharmacologic therapy is a more desirable treatment modality because the reduced kidney and liver function often seen in older patients can decrease drug metabolism and increase side effects with systemic administration.

Thus, we created a mouse model of PAD to examine whether locally administered agents alleviate hindlimb ischemia by promoting angiogenesis and microvascular remodeling. Specifically, we used a catheterized osmotic pump to continuously deliver the therapeutic agent to the ischemic thigh muscle of mice. Using our delivery system, we were able to maintain optimal concentrations of the drug in the local environment; this approach allows for appropriate drug bioactivity, avoids possible systemic side effects, and overcomes the disadvantage of limited local drug access associated with systemic administration. Additionally, to assess whether locally administered agents promote revascularization, we used advanced casting and high-definition imaging techniques that enable quantification of changes in the microvasculature. Collectively, the combination of methodologies used in this video article is useful in preclinical studies to aid in understanding pharmacologically induced revascularization in PAD patients7-9.

The animation demonstrates the osmotic pump insertion and hindlimb ischemia surgery detailed in the protocol. Figure 1 shows laser Doppler images of perfusion of the hindlimb, confirming ischemia. After vascular casting with Microfil, a 3D micro-CT image of the vascular network shows that Microfil can fill the vessels effectively (Figure 2A) but that discontinuities can occur (Figure 2B) due to various procedural factors (e.g., air bubbles, lack of pressure, viscosity of the Microfil).

Figure 1. Confirmation of hindlimb ischemia via laser Doppler perfusion imager. The representative Doppler images show the blood perfusion before and after surgical ligation of femoral artery in the mouse hindlimb. Ischemia was created in the left hindlimb (see arrows). 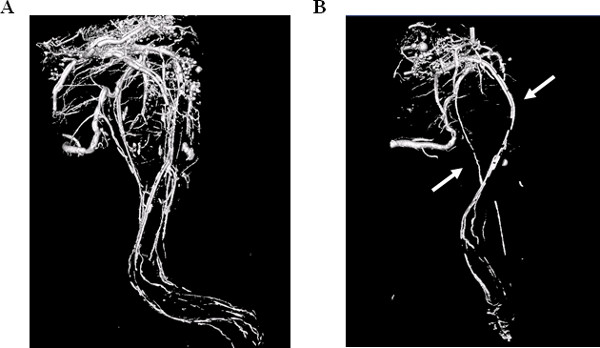 Figure 2. 3D Micro-CT image of hindlimb vasculature. Vascular casting with Microfil reveal a network of veins and arteries throughout the hindlimb (A). Discontinuity of the Microfil can also occur (B), disabling the visualization of a detailed vascular network (see arrows).

Here we present a method for osmotic drug/substance delivery in a mouse model of hindlimb ischemia. In addition, we describe a casting technique in which we have used Microfil to produce a 3D reconstruction for analysis of the vascular network.

The level or severity of ischemia varies according to where the arterial ligation/excision is made. We created a double ligation in the common femoral artery proximal to the origin of the profunda femoris and epigastrica arteries; this approach can produce a more severe ischemia in the distal hindlimb. Be sure to monitor the animals after surgery and provide pain relief by local administration of analgesics. Additionally, the Microfil may not always perfuse limb vasculature completely. Thus, it is important to ensure that all blood is rinsed out of the vasculature after the perfusion of the heparinized saline. Reasons for incomplete perfusion of the Microfil include the lack of applied pressure or improper viscosity of the Microfil, both of which must be adequate to ensure the Microfil reaches the most distal regions of the hindlimb and thus fills the entire vasculature. To address these issues, apply consistent pressure at 100 mmHg and experiment with the compound:diluent ratios for the particular animal application.

To study arteriogenesis (pre-existing collateral artery growth), the ideal approach is to ligate the femoral artery immediately distal to the origin of the deep femoral branch to redirect blood flow to the collateral vessels. However, the response to this procedure varies widely among mouse strains, and the extent of ischemia may be insufficient in some mouse strains (e.g., C57BL/6). A less severe ischemic model may not provide a prolonged window of time to investigate therapeutic effects in heavily vascularized mouse strains such as C57BL/6. To avoid these issues, we created hindlimb ischemia by ligating the proximal femoral artery, which created a more severe ischemia to better demonstrate the local drug release effects; however, this approach precludes analysis of arteriogenesis in the proximal deep branch collateral vessels. Thus, the therapeutic effects are drawn mainly from the distal ischemic region, which is consistent with the anatomic location (anterolateral thigh) where the drug/substance is released. During surgery, it is critical not to injure the fragile femoral vein because local bleeding can lead to inflammation and edema, which affect both arteriogenesis and angiogenesis. We recommend using 8-0 prolene sutures to ligate the femoral artery with an appropriate knot tie to avoid stretch, strain, or rupture of the artery. In addition, Microfil must be used immediately (within 20 min) after mixing the 3 ingredients (compound, diluent, and curing agent) because it quickly polymerizes, which creates technical difficulties for injection. As previously stated, Microfil does not always successfully perfuse the smaller vasculature, but practice and use of proper techniques can help overcome this limitation.

The pump fill volume must be over 90% of the mean fill volume; if not, extra air may get trapped inside the pump. Additional technical information is located at www.alzet.com. In addition, the Microfil agent must be at the preferred viscosity for a particular application, so the ratio of diluent to compound may need to be modified.

The hindlimb ischemia model is highly reproducible and is applicable to PAD10,11. The stable delivery of therapeutic agents in this model is necessary to obtain informative results2. In conclusion, the 3D imaging technique we used to visualize the morphologic structures is an excellent tool for examining the mouse vasculature and provides a powerful system for studying vascular pathologies.

The authors declare no conflict of interest. All animal procedures were conducted in accordance with the Guidelines for the Care and Use of Laboratory Animals and were approved by the Institutional Animal Care and Use Committee (IACUC) at the University of Texas Health Science Center at Houston.

The authors would like to thank Keith Michel of the MD Anderson Small Animal Imaging Facility for his technical assistance with micro-CT imaging, Edward T.H. Yeh, MD, for surgical assistance, and Rebecca Bartow, PhD, for editorial assistance. This work was supported in part by the American Heart Association.