With the intent of characterizing changes in miRNAs on differentiated human neural stem cells (hNSCs) we describe hNSC differentiation on a three dimensional system,the evaluation of changes in microRNA expression by miRNA PCR array, and computational analysis for miRNA target prediction and its validation by dual luciferase assay.

Neural stem cells (NSCs) are capable of self-renewal and differentiation into neurons, astrocytes and oligodendrocytes under specific local microenvironments. In here, we present a set of methods used for three dimensional (3D) differentiation and miRNA analysis of a clonal human neural stem cell (hNSC) line, currently in clinical trials for stroke disability (NCT01151124 and NCT02117635, Clinicaltrials.gov). HNSCs were derived from an ethical approved first trimester human fetal cortex and conditionally immortalized using retroviral integration of a single copy of the c-mycERTAMconstruct. We describe how to measure axon process outgrowth of hNSCs differentiated on 3D scaffolds and how to quantify associated changes in miRNA expression using PCR array. Furthermore we exemplify computational analysis with the aim of selecting miRNA putative targets. SOX5 and NR4A3 were identified as suitable miRNA putative target of selected significantly down-regulated miRNAs in differentiated hNSC. MiRNA target validation was performed on SOX5 and NR4A3 3’UTRs by dual reporter plasmid transfection and dual luciferase assay.

MiRNAs have an average 22 nucleotides in length and are proven regulatory molecules7, they do not encode proteins, but rather bind 3 prime untranslated region (3’UTR) of mRNAs, regulating their stability and translation into proteins. MiRNAs are reported to participate in the regulation of a number of cellular processes, including development, proliferation, and differentiation8. Several miRNAs have been implicated in regulating the fate and specification of neural stem cells9.

In two dimensional (2D) standard culture environment the complexity of the in vivo environment is not matched, and consequently the induction and regulation of hNSC differentiation is not optimal. In vivo, cells are surrounded by a three dimensional (3D) microenvironment composed by other cells and extracellular ligands, including many types of collagens, laminin, and other matrix proteins (extracellular matrix, ECM). Previous studies have reported that the architectural topography of the materials mimicking ECMs and their geometry influence cell phenotype and fate10-15. A number of commercially available 3D scaffolds are available; we used a highly porous polystyrene scaffold engineered with a well-defined and uniform architecture into a 200 µm thick membrane which provides a 3D space into which cells can invade and differentiate16-18.

Herein 2D and 3D differentiation assays are used to assess axonprocess outgrowth. Furthermore, we describe a method to profile the miRNA expression of a clinical grade hNSC line to further investigate miRNA effects on its differentiation. The methods in here illustrated are based on the ones originally described in19.

NOTE: Isolate and derive hNSCs,from an ethical approved tissue, described in a previous publication2. Please follow the ethical and institutional guidelines while following this procedure.

NOTE: 3’ UTR luciferase reporters for the validation of target mRNA has been previously described25.

In Figure 1 is visualized the investigation and quantification of hNSC differentiation on 3D scaffolds compared with traditional flat surface cultures (2D) and expressedas axon process outgrowth measurements. In Figure 2 is representedthe workflow and the results for the miRNA quantification using stem cells and developmental pathways focused miRNA PCR array to investigate differential expression of miRNAs in 2D and 3D differentiated hNSCs compared with undifferentiated control. Following miRNA comparative analysis between differentiated and undifferentiated hNSCs, and computational analysis for target prediction, SOX5 and NR4A3 (NOR1) were identified as putative target mRNAs. To study the direct interaction between the miRNAs and their putative site on the 3’UTR mRNA we used 2 commercially available plasmids containing either SOX5 or NR4A3 3′UTR sequence inserted downstream of the firefly luciferase reporter gene, and containing in the same plasmid renilla luciferase gene for normalization. The representative results of 3’ UTR luciferase activity down-regulation is presented in Figure 3. 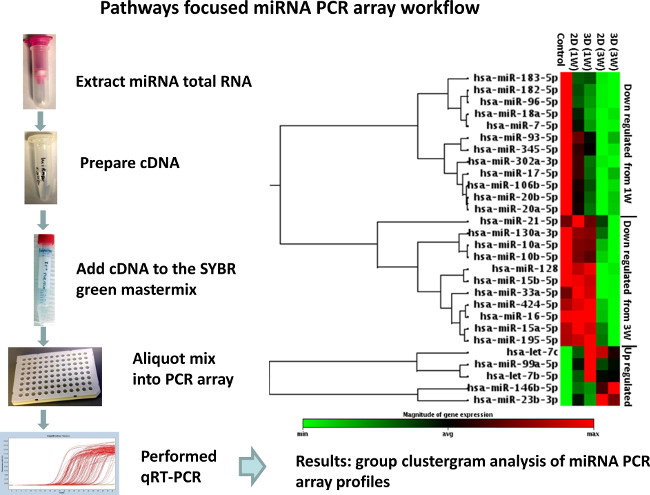 Figure 2: Schematic workflow of miRNA profiling in differentiated hNSCs. Total RNA,including miRNAs, was extracted from either differentiated hNSCs on 3D scaffolds and standard 2D cultures, or undifferentiated control. 250 ng of total RNA were retro-transcribed with a method that facilitates the selective conversion of mature miRNAs into cDNA suitable for miRNA quantification with human cell differentiation and development miScript miRNA PCR array. The geo-mean of SNORD61, SNORD68, SNORD72, SNORD95, SNORD96A, and RNU6-2 was used for data analysis based on the 2-ΔΔct method. Significant changes were defined as +/- 1.5 fold up and down regulation to a statistically significant extent. Data were analyzed using web-based software available at Results are expressed as a clustergram. Modified from Figure 319. Please click here to view a larger version of this figure. 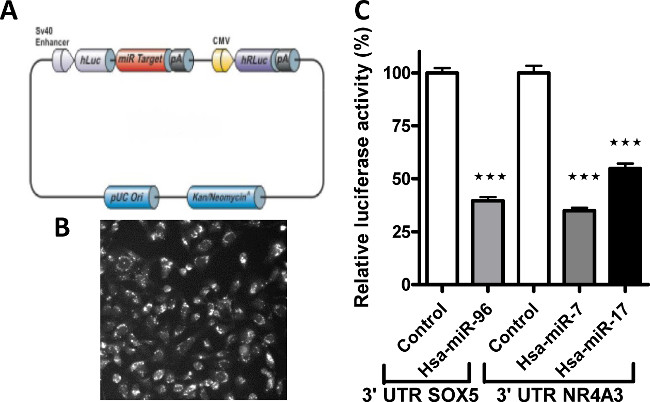 Figure 3: Validation of miRNA target predicted mRNA using a dual luciferase report assay. (A) Representative diagram of a dual luciferase reporter plasmid used as a tool to validate 3’UTR sequence as a direct target of a miRNA. (B) Representative micrograph showing transfection efficiency. (C) Signals, expressed as relative luciferase activity, from human 3'UTR reporters ofSOX5 and NR4A3 genes were significantly knocked down in the presence of hsa-miR-96, and hsa-miR-7 and 17 miRNA mimics respectively. Modified from Figure 519. Please click here to view a larger version of this figure.

The development of new in vitro assays to assess and improve the differentiation of stem cells has always presented a challenge for the investigation of their functionalities and therapeutic capabilities. Long term and stable attachment of hNSCs, required for the development of a robust 3D in vitro differentiation assay, was addressed by testing several 3D substrates with different characteristics in term of materials and structures. As part of the assay development we also assessed optimal cell seeding concentration and identified the requirement for the scaffolds to be laminin coated. Although our hNSCs can spontaneously differentiate upon 4-OHT and growth factor removal, the implementation of a 3D culture system showed a significant improvement in their differentiation capability as measured by axon process outgrowth when compared to standard 2D differentiated hNSCs.

To investigate the effect of 3D induced differentiation on hNSC miRNA expression we used a PCR array. Compared with standard chip microarray PCR array offers the advantages of a direct quantification and validation of miRNA of interest. Although the PCR array is limited in term of total number of miRNA per array, for example in here less than 96, it can be tailored to specifically include miRNAs of interest, in our case previously reported in stem cell development. The expression of pathway focused miRNAs was profiled in 3D and 2D differentiated hNSCs compared with undifferentiated hNSCs. The most significantly down-regulated miRNAs were selected and analyzed to assess their putative target mRNAs with the intent of determining their functionality and biological interpretation using online available algorithms (DIANA Lab, PicTar, and TargetScans).

A single miRNA can recognize hundreds of targets and for this reason we validated miRNA interactions with 3’ UTR mRNAsthat may be suitable candidates in axonal regulation. NR4A3, a target of the hsa-miR-7, and miR-17 family, is a member of the NR4A family nuclear receptors which, depending on their level of expression, are involved in the differentiation, survival, apoptosis and regulation of hippocampal axon guidance26. Similarly SOX5, a target of hsa-miR-96, is reported to control cell cycle progression in neural progenitors27axon length28, migration, post-migratory differentiation, and projections of neurons29. Both SOX5 and NR4A3 were identified as a direct target mRNA of hsa-miR-96, and hsa-miR-7 and 17 respectively by dual luciferase reporter assays. Dual luciferase (Firefly and Renilla) relies on two different reporter genes in the same plasmid and offers an improved system allowing normalization for effects caused by suboptimal transfection and cytotoxic effects compared with a single luciferase plasmid system. As part of our assay development we also optimized our transfection conditions in order to obtain high efficiency.

The protocolsdescribed herein may be exploited to further optimize and characterize in vitro hNSC differentiation which may beimplemented intransplantation protocols for pre-clinical studies and future clinical applications.

All authors are employees, stock and/or stock option holders in ReNeuron Ltd or its parent company. This study was supported by ReNeuron (RENE.L).

We acknowledge Julie Heward for helping in the preparation of hNSCs, and Lavaniya Thanabalasundaram for her technical support with HeLa culturing and transfection.